Imitation is the sincerest form of flattery

In early modern England, the act of writing a poem did not always begin with a flash of inspiration. One manuscript at the British Library offers a glimpse of how an anonymous poet used the words of others to get started. Stowe MS 962 is a comprehensive collection of early modern verse, containing around 350 poems. The volume is a Who’s Who of manuscript poetry: it amasses works by over twenty poets, from John Donne, Ben Jonson and Sir Francis Bacon to Henry King, William Strode and Sir Kenelm Digby. It also contains three anonymous poems that at first glance appear to be the work of the poet and historian Samuel Daniel (1562/3–1619). On closer inspection, however, they are something else entirely.

When the first lines of these poems are entered into The Union First Line Index of English Verse 13th-19th Century, hosted by the Folger Shakespeare Library, the results suggest that they belong to Daniel’s influential sonnet sequence Delia, first published in 1591. Reading beyond the first lines, however, it seems that an anonymous poet has simply borrowed the opening lines of Daniel’s sonnets, only to use them as a springboard for new poetic compositions.

Imitating the style of other writers was an important feature of early modern education. Ben Jonson noted that a skilful poet should be able to ‘convert the substance or riches of another poet to his own use’. The words of others could thus generate material for allusions, responses and even poetic parodies. In Stowe MS 962, for instance, one of Jonson’s own poems begins: ‘Have you seen the white lily grow / Before rude hands had touched it?’. Transcribed alongside this work, however, is a scurrilous parody: ‘Have you seen but a black little maggot / Gone creeping over a dead dog?’ (f. 179v). 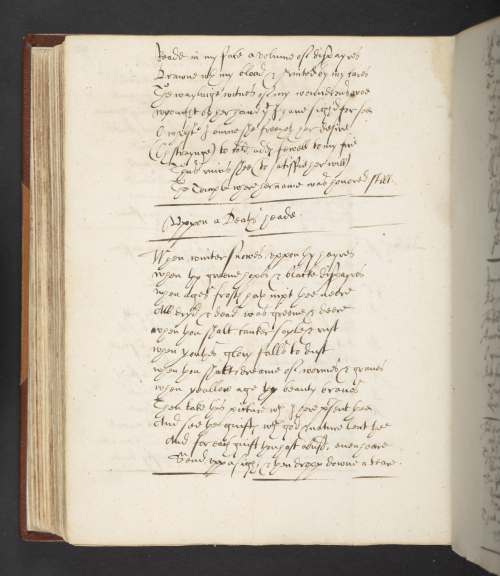 The poems that take their cue from Daniel’s Delia are less satirical and suggest a subtler creative technique. They fit into the genre of the response poem, using Daniel’s words and images to reach a different poetic conclusion. Two of the poems condense Daniel’s 14-line sonnets into 12 lines, and reduce the sonnet’s characteristic five-beat line to a more sprightly four beats. The first of these response poems uses the opening line and a later couplet of Daniel’s Sonnet 37, retitling the work ‘Upon a Death’s head’ (i.e. a skull):

when thy greene hopes and blacke dispayres

All dry’d and dead was greene and deere

when thou shalt canker soyle and rust

when youthes glory falls to dust

when thou shalt dreame of wormes and graves

when yeallow age thy beauty braves

Then take this picture which I here present thee

And see the guiftes which god and nature lent thee

Send upp a sigh, and then dropp downe a teare.

The second response poem follows Daniel’s Sonnet 9 in its first line, and uses other features of its imagery:

If it be love to draw a breath

Short and bitter, and one earth

To pant. and sigh. to wound the ayre

With cryes. that full of passions are

To seeke forgotten pathes where none

If love afflict us with sadd thoughtes

And fill our musique with sadd notes

If love enforce us loose ourselves

And split our shipps on sorrowes shelves

Then farewell love, let me live as before

Ile weepe, and sigh, and pant, and greeve noe more 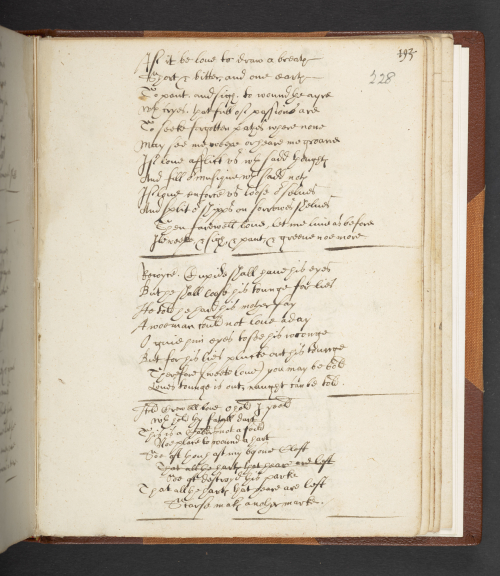 A third poem in Stowe MS 962 has a much closer relationship to one of Daniel’s sonnets, but still suggests a concerted attempt to refashion Daniel’s lines into a new poetic work. Beginning ‘Reade in my face a volume of despairs’, the poem takes its first line from Daniel’s Sonnet 42, and includes variations of its second line and its final couplet. Unlike the other response poems, it retains the five beats of iambic pentameter, but reduces the sonnet itself to a mere 8 lines. Ignoring Daniel’s references to Helen of Troy, the poem is more interested in contrasting the burning heart of the speaker with the chilly response of his mistress:

Reade in my face a volume of dispayres

Drawne with my blood and printed by my cares

Wrought by her hand that I have sigh’d for soe

O whilst I burne she freezeth her desire

(Oh straynge) to cold, addes fewell to my fire

Thus ruins shee (to satisfie her will)

The Temple where her name was honored still.

The pages of Stowe MS 962 offer an intriguing glimpse of a broader culture of literary imitation and response. These anonymous verses may have been written as an admiring tribute to Samuel Daniel, as exercises in composition, or simply as a means of overcoming writer’s block. Whatever the intention, they reveal one of the many ways in which early modern manuscripts offered opportunities to find, compose and share verse.