A recent addition to our digitised collections is a unique 15th-century guidebook for pilgrims to the Holy Land. Almost like a late medieval Lonely Planet guide for a prospective pilgrim, it contains an illustrated narrative of the journey, a detailed itinerary with distances, and practical instructions for prospective pilgrims.

The main text is a detailed account of a pilgrimage to Jerusalem and Mount Sinai, originally written in Italian by the Franciscan friar Niccolò da Poggibonsi (fl. 1345–1350), and known as Libro d’Oltramare (Book of Outremer). Our manuscript (Egerton MS 1900) is the only known copy of the German translation of this text. 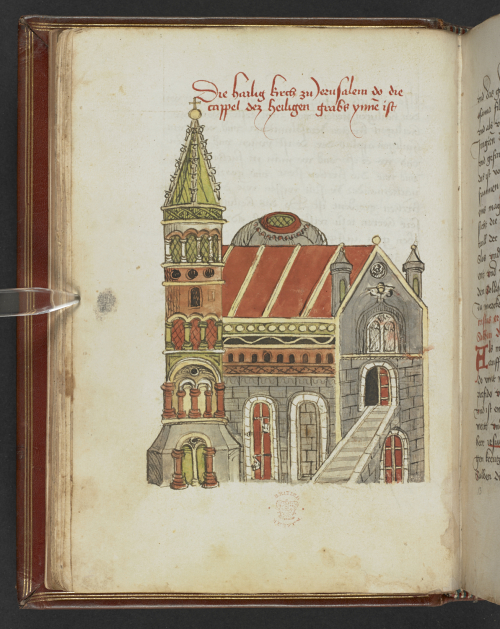 The genre of written pilgrimage accounts to the Holy Land has its origins in the 4th century. Such texts were aimed at readers who were unable to physically make such a long and difficult journey. By reading descriptions of the actual locations mentioned in the Bible, they could instead go on a mental pilgrimage, envisaging the places as they read.

Niccolò’s mid-14th-century text revolutionised this genre in several ways, making it easier than ever before for a European reader to visualise the cities, churches and places of veneration. Firstly, his account was the first pilgrimage guidebook written in the vernacular. Moreover, it is a first-person narrative based on his first-hand experiences, whereas most previous accounts were derived from much older texts. Moreover, it seems that Niccolò planned from the beginning to incorporate illustrations of the places and marvels he encountered into the text. 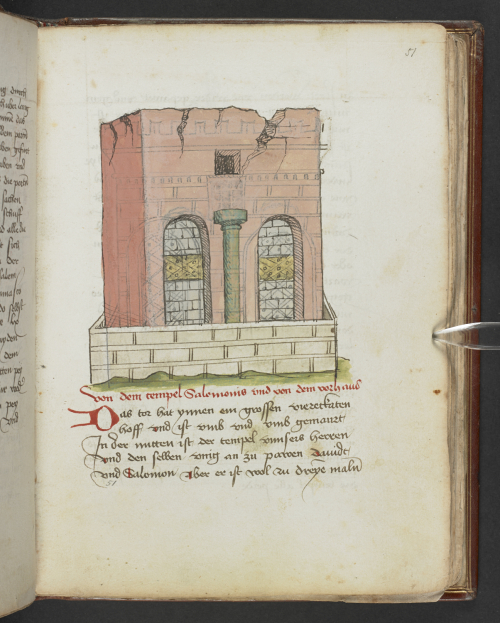 Unsurprisingly, the text describes the many important churches and sites in Jerusalem in the most detail. These passages are illustrated with no fewer than 40 drawings. They mainly portray important buildings and churches, such as the Golden Gate (f. 51r), the complex of the Church of the Holy Sepulchre (ff. 12v, 14r, 15r, 18v, 19v, 20v, 23v, 26r), the Chapel of the Ascension (f. 44r), and the Dome of the Rock on Temple Mount (f. 52v). 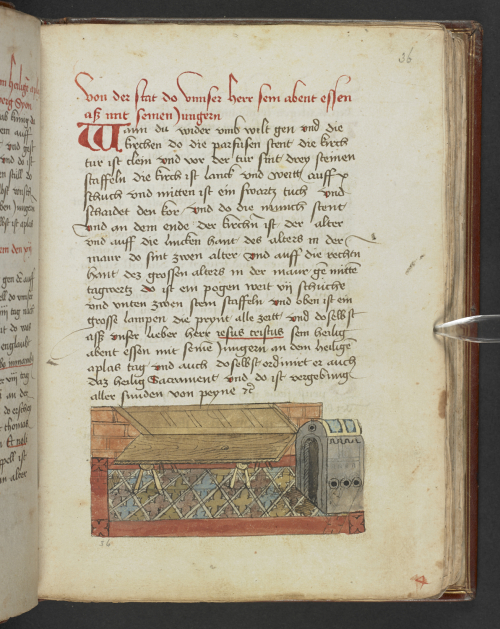 More specific locations associated with important events from the Bible are also included, such as ‘the place where our Lord ate his evening meal with his Disciples' (der stat do unnser herr sein abent essen aß mit seinem Jungern). Although the perspective is slightly confusing, the illustration of the place of the Last Supper shows a wooden trestle table on a colourful mosaic floor. 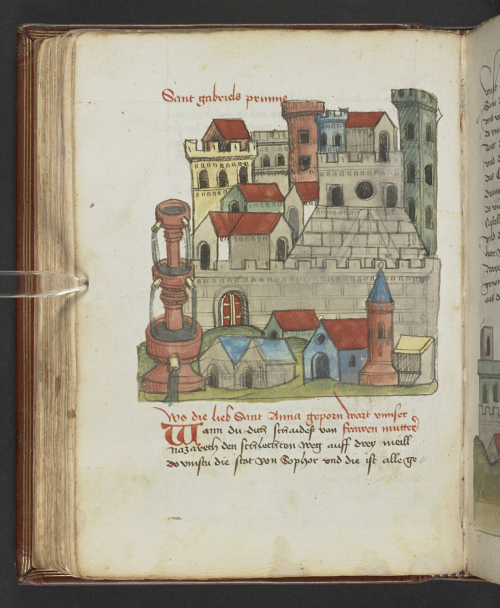 Numerous locations of important biblical events elsewhere in the Biblical Levant and the Sinai Peninsula are also portrayed. For instance, under the heading ‘Saint Gabriel’s well’ is a nearly full-page drawing of a well or a fountain with the city of Nazareth in the background. This was the well where, according to tradition, the Angel Gabriel appeared to the Virgin Mary during the Annunciation. 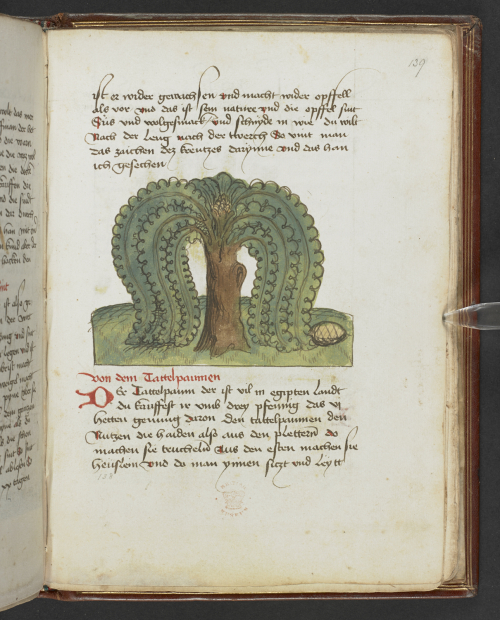 Another site mentioned towards the end of the text, as the narrator is travelling through Sinai, is the tree of ‘the apples of Paradise’. This seems to refer to the very Tree of Knowledge of Good and Evil in the Garden of Eden, the fruit of which tends to be depicted as an apple in western Christian art. 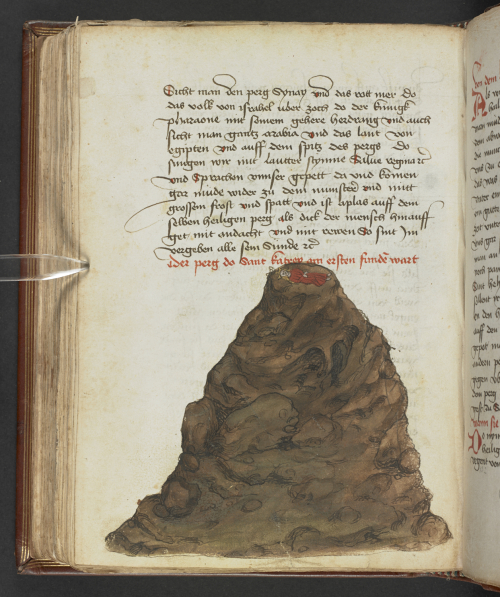 Another category of important places in the pilgrimage account is locations related to the veneration of early Christian martyrs. For example, there are several illustrations of sites connected to St Catherine of Alexandria (d. c. 305). The most unusual among them is perhaps the drawing of ‘the mountain where St Catherine was first found’ (Der perg do Sant Katrey am ersten funden wart). It shows a mottled brown mound with the incorrupt body of the saint, dressed in a red dress and a golden crown, lying on the top. 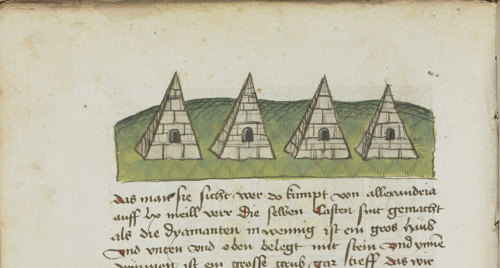 A smaller category of illustration is that of various marvels that were curious to a medieval European traveller. Shown above are the small drawing of four pyramids, most likely representing the pyramids at Giza. The heading testifies to the late-medieval belief that, instead of monumental tombs, they were in fact the ‘granaries of the Pharaohs’ (korn kasten kunig pharaonis). 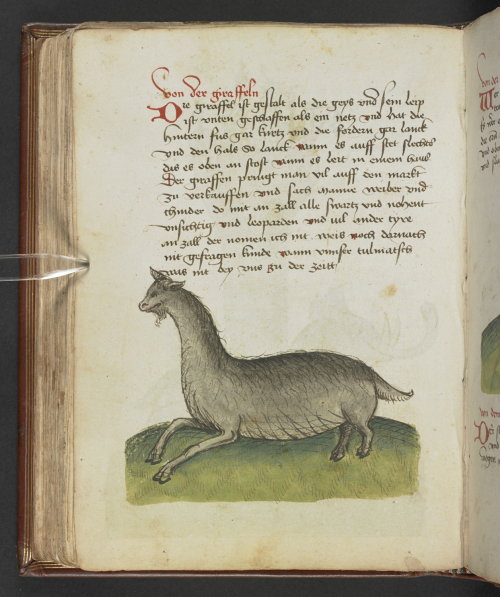 Interrupting the sequential narrative of the journey is a small series of exotic animals encountered by Niccolò, including the elephant, a local goat breed big enough to ride, and the ostrich. More unusually for a medieval illustration, the fourth exotic animal is the giraffe. The text is based on an eyewitness encounter, but the artist is unlikely to have seen an actual giraffe. While they included the characteristic long neck, they seem to have based the other features of this giraffe — such as the cow-like head and the shaggy grey coat — on domesticated animals closer to home.

Why not check out the rest of this wonderful manuscript and go on a mental pilgrimage of your own? You can read more about it in this article by Kathryn Blair Moore: ‘The Disappearance of an Author and the Emergence of a Genre: Niccolò da Poggibonsi and Pilgrimage Guidebooks between Manuscript and Print', Renaissance Quarterly, 66 (2013), 357–411.