Your plain friend without flattery

Have you ever told someone off for their own good? Would you like some inspiration from the early modern era?

One of our manuscripts (Add MS 15891) began as a letterbook compiled by Samuel Cox, secretary to the Elizabethan courtier Sir Christopher Hatton (c. 1540–1591), but it continued to accrue examples of elegantly phrased letters after his death. Among them is a blistering letter (ff. 195r–v) Lady Margett wrote in response to the ‘paper mouth full of lyes’ she had received from her son’s schoolmaster. The copy of her letter is undated, but words such as ‘spurgaule’ (to strike with the spur) would suggest that it belongs to the mid- to late 16th century. 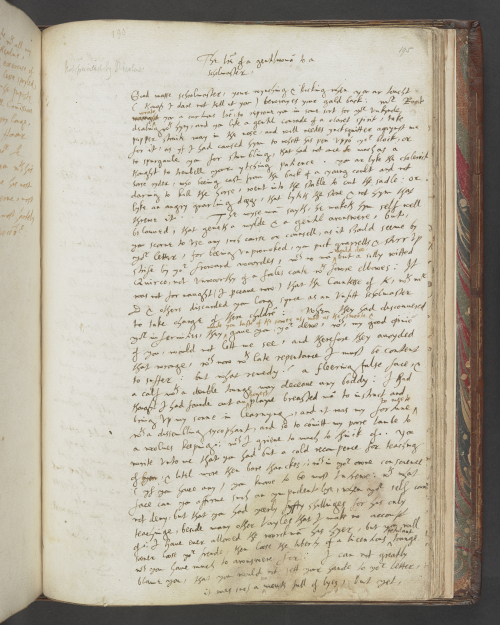 During this time, there was a flourishing market for letter writing manuals in English. They provided formulae and models for topics such as exhorting someone to lament, rejoicing about a friend’s return to health, or even how to write a letter when you had very little news to impart.

According to William Fulwood, whose The Enemie of Idlenesse (1568) was the first letter writing manual in English, a letter of invective should fall into three parts. First, the author should win goodwill by emphasising that they wrote reluctantly, only after deciding that, having already endured the addressee’s wicked behaviour for some time, it would be wrong to allow it to worsen. Second, they should explain the grounds for their censure and provide evidence. Finally, if the writer was addressing a friend, they should write gently, stating the inconveniences which would ensure if their behaviour continued. When addressing an enemy, the writer ought to emphasise that they acted out of morality rather than hatred, and would speak more fully on the matter at an opportune moment.

As a gentlewoman, Lady Margett might have received a reasonable education in rhetoric, but is highly likely to have been familiar with these manuals. If she had used Fulwood’s suggested opening in her previous ‘curtuous’ letter, this time she decided to go on the attack by likening him to a horse whose ‘wynching [wincing] and kicking … bewrayes your gald back.’ Not content with one insult when she might use several, Margett had evidently mastered the abundant style and the use of a colourful simile:

'You ar lyke the cholerick horse ryder, who beeing cast from the back of a young coult and not daring to kill the horse, went into the stable to cut the sadle: or lyke an angry gnarling dogg, that byteth the stone & not hym that threwe it.'

As well as being like a horse with a sore back, an angry dog and an irritable horse rider, the schoolmaster was ‘not vnwarthy of a fooles coate with fowre elbowes’ for failing to heed the wise man’s saying that ‘he maketh hym self well belouved, that geueth a mylde & a gentil awnswere’.

Lady Margett had good reason to be angry. The schoolmaster was not the ‘honest playne breasted’ man she thought he was, but a ‘dissembling sycophant.’ Her good opinion of him had blinded her to the fact that several others (including the ‘Countesse of K’) had made him ‘taste of the sower as well as the sweete’ after discovering that he was ‘vnfitt … to take charge of there children.’ Her guilt at committing her ‘poore lambe to a woolues keeping’ was compounded by the slurs he had made on her reputation for generosity. For him to claim that he was poorly paid for teaching was an ‘ympudent lye’, since she had always ‘allowed the woorkman his hyer’. Clearly, he would rather lose a friend than the ‘liberty of a licentous petulant tounge’. 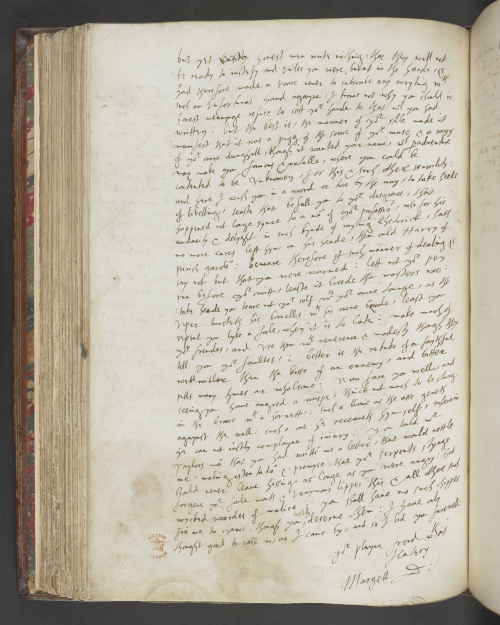 The schoolmaster’s decision not to sign his letter provided Lady Margett with further ammunition. Drily observing that she could not understand such dishonesty unless he had burned his hand and vowed never to sign anything with it again, she could still recognise his style as ‘a pigg of the sowe of your muse & a ragg of youre owne dunghill’. Despite these insults, she characterised herself as acting from the best of motives. She sternly reminded him to ‘take heede of libelling’, lest the same disgraceful fate befall him as had a fellow schoolmaster, whose love of ‘rayling Rhetorick’ meant that he now had ‘no more cares left hym on his heade’. Doling out further sententious wisdom, she counselled him that he had no right to feel aggrieved: ‘such a blowe as the asse geueth agaynst the wall, such a one he receaueth’. Signing off as his ‘playne frend without flatery’, she prayed that God would forgive his ‘foule mouthe & venymous lippes this & all other such wycked woordes of malice’. Alhough very few of us may take up our pens the next time someone offends us, the schoolmaster and Lady Margett’s world of honour culture and social credit still resonates. As she showed in this letter, you can take the moral high ground and still get your own back.