Henry VIII: the possessions of a Tudor monarch

King Henry VIII of England (1509–1547) was an extraordinary collector of beautiful and expensive things. Portraits of this Tudor monarch attest to the richness of his wardrobe and possessions. Cloth of gold and crimson velvet, jewelled fabrics, feathered caps, embroidery and fur all feature prominently in these illustrations. We can see evidence of this in a tiny girdle book (Stowe MS 956) that is thought to have been owned by Henry’s second wife Anne Boleyn (d. 1536), containing an English translation of the Book of Psalms. 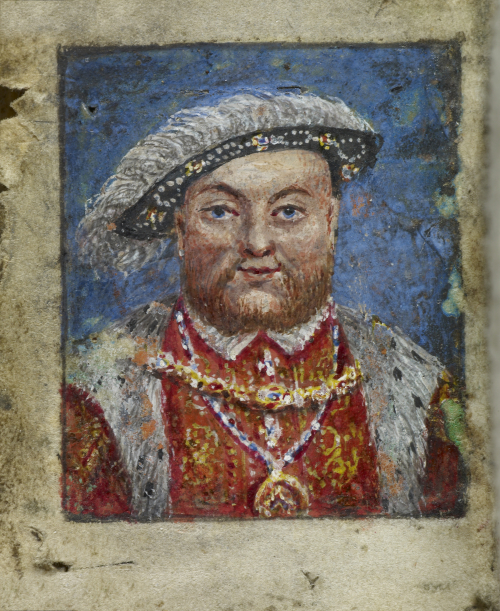 Surviving manuscripts from the height of the Tudor period give an insight into the enormous scale and variety of Henry’s possessions. In September 1547, 6 months after the King’s death, commissioners were appointed to compile an inventory of all his moveable goods and the contents of his 55 palaces. The task was so monumental and the administrators were so meticulous that it took them 18 months to complete. 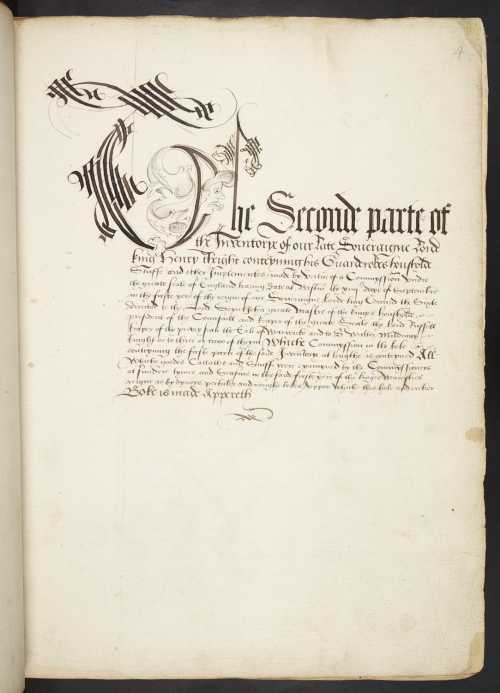 The opening of the second part of the inventory of Henry VIII’s moveable goods, compiled after his death in 1547: Harley MS 1419/1, f. 4r

The finished inventory records thousands of objects that present a detailed picture of the splendour and opulence at the heart of the Tudor court. It consists of two parts. The first (now Society of Antiquaries MS 120 A and B) includes lists of money, jewels, books and plate, the munitions in the King’s forts and the King’s ships, as well as the contents of his armouries and stables. The second (now bound in two volumes as British Library Harley MS 1419/1 and Harley MS 1419/2) details the contents of each of the King’s palaces and the various specialist wardrobes in his possession, as well as those of his children and successors, Edward, Mary and Elizabeth. This second part of the inventory has been recently digitised and is now available to view in full online on our Digitised Manuscripts site. 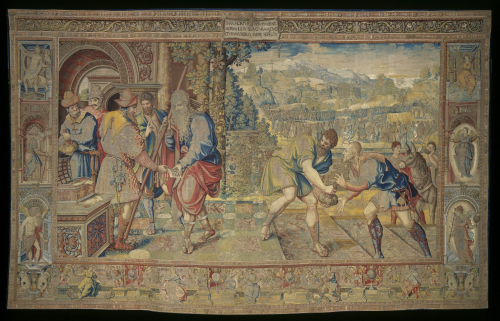 A tapestry of the story of Abraham from Henry VIII's Great Bedchamber at Hampton Court Palace, now housed in the Royal Collection

The inventory records some extraordinary items that belonged to the royal household. These include: 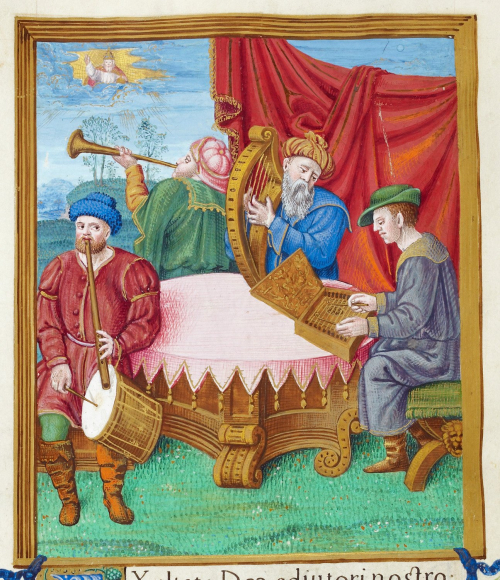 As part of their work, the commissioners of the 1547 inventory also provided lists of the books and manuscripts that Henry housed in his palaces. Many of Henry’s books were transferred to the Old Royal Library after his death, and subsequently became part of the British Library’s collections when they were presented to the nation by King George II (1727–1760) in 1757. Excitingly, it is possible to identify several of the books mentioned in the inventory from the descriptions provided. 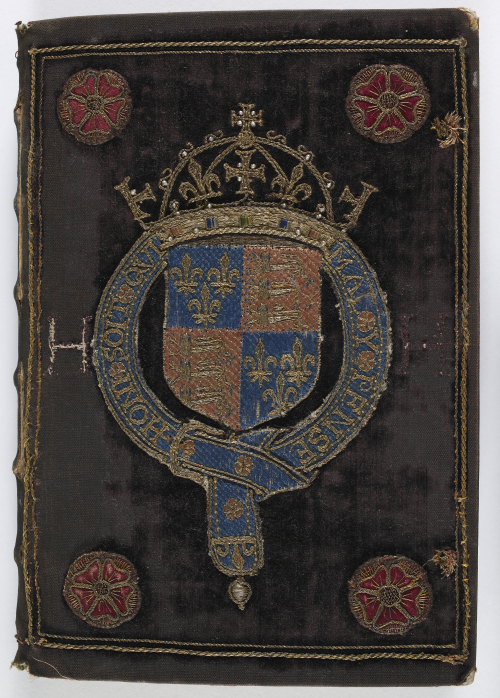 A manuscript with a crimson velvet binding, recorded in the 1547 inventory of Henry VIII’s moveable possessions: Royal MS 20 A IV

One item, for example, is recorded in the inventory as:

a description of the holy lande and a boke covered with vellat enbrawdred with the kings armes declaring the same, in a case of blacke leather with his graces Armes.

The text referred to here is in fact a French work entitled ‘Tresample description de toute la Terre Saincte’, written by a man who identifies himself as Martin de Brion of Paris. The manuscript is now housed in the British Library (as Royal MS 20 A IV), along with its beautiful crimson velvet binding, embroidered with the arms of England and France with fleur-de-lis, roses and crowns, and the letters H. H. on either side. 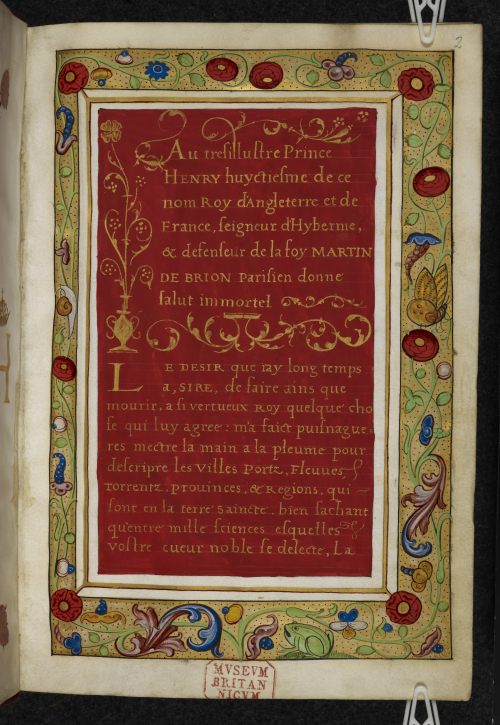 A dedicatory letter to Henry VIII, from a 16th-century manuscript once part of the king’s possessions: Royal MS 20 A IV, f. 2r

In addition to the description of the Holy Land, the book also includes a dedicatory letter and poem addressed to Henry, which begins:

'To the most illustrious Prince Henry eighth of this name, King of England and France, lord of Ireland, and defender of the faith, Martin de Brion of Paris sends immortal greetings.'

The original chemise binding of a manuscript once belonging to Henry VIII: Harley MS 1498, upper cover

Another fascinating manuscript that was in Henry’s possession and still survives was originally made for his father, Henry VII (1485–1509). It is listed in the inventory as 'Item a booke of Kynge Henry the viith his foundacion of his chappell at Westminster'. The book was apparently stored in the little study next to the king’s old bedchamber in the palace there. The small volume (Harley MS 1498) has an original chemise binding, made of burgundy velvet and pinkish gold damask, with five painted enamel badges pinned to its upper and lower covers. A small tassel is affixed to the top left-hand corner, made from gold and burgundy thread. 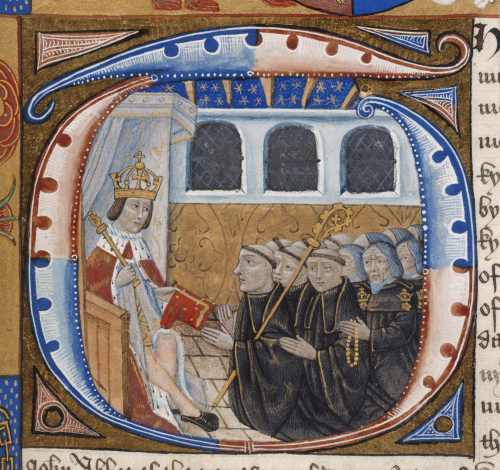 The manuscript preserves a series of four agreements (indentures) made on 16 July 1504 between Henry VII and the abbot and monks of Westminster Abbey, concerning the planned construction of the King’s new burial chapel. This copy seems to have originally belonged to the abbey, but probably became part of Henry VIII’s personal library after the Dissolution of the Monasteries.

The volume opens with an enlarged decorated initial, containing a representation of a crowned and enthroned Henry VII bestowing the manuscript to a group of monks kneeling before him. If you look closely, you can see that the book in Henry’s outstretched hand shows the same five enamel badges and the burgundy and gold tassel that remain part of the manuscript’s binding to this day. 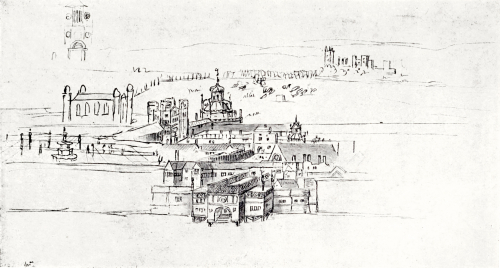 For more insights into life at the Tudor court during the reigns of Henry VII and Henry VIII, we recommend this blogpost. You can read more about the libraries of King Henry VIII in James Carley, The Books of King Henry VIII and his Wives (London: The British Library, 2004). The inventory itself has been edited by David Starkey, The Inventory of Henry VIII. Society of Antiquaries MS 129 and British Library MS Harley 1419: The Transcript (London: Society of Antiquaries, 1998).

We hope you enjoy searching the inventory of Henry VIII’s moveable goods online, and that you can spot more treasures recorded in its pages.