A history of the book in seven objects

Books surround us. We have them in our homes, kitchens, beds and bathrooms. Supplied by bookstores and libraries, we can even read them on our kindles and phones or listen to them through earphones. What we may not realise, however, is that whenever we open a book, we are taking part in a history stretching back millennia.

On the first anniversary of the opening of our Writing: Making Your Mark exhibition, we are exploring seven objects that represent some of the key stages in the development of the book in the ancient era, leading to the form of book as we know it.

It is with stone inscriptions that the evolution of writing started in many cultures and, together with it, the story of the book. This inscription, carved on a limestone plaque in Egypt about 3600 years ago, is the earliest “book” in the British Library. It was discovered recently and displayed for the first time at the Library’s Writing: Making your Mark exhibition. The stone preserves a hymn written in hieroglyphs to praise Osiris, the ancient Egyptian god of the underworld and king of the dead. 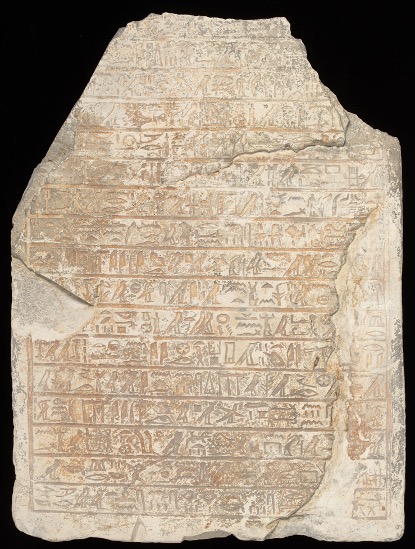 A major step in the transition from stone to page was a new invention which has become the material manifestation of writing for thousands of years: ink. Using ink made writing easier and faster. As a result, more people started to write and with writing’s spread the format of books also changed. Ink was first applied on stone but people soon realised that it could be used on smoother, smaller and more manageable surfaces. From the 3rd century BC, fragments of broken dishes were used for writing short and perishable texts, such as receipts, drafts and notes. 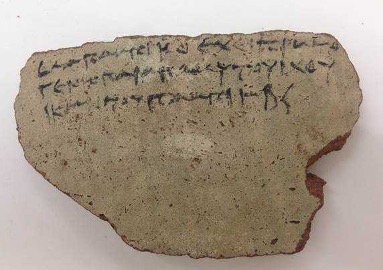 Broken potsherd bearing three lines of Greek text written with ink to testify that Pamyt has paid for fishing tax in 255BC: Ostracon 12634 (Egypt, 255 BC)

This little pottery shard contains a fishing permit written with ink by an Egyptian clerk for a man called Pamyt about 2250 years ago, allowing him to fish in the Nile. This kind of handy, ink-inscribed document made writing widely available throughout society.

Writing on stone, pottery or even bone was very efficient, but these items were not big enough to record longer texts. The solution was provided by papyrus rolls. Papyrus is named after the papyrus reed, growing in the marshes of Egypt. The fibres of this plant were soaked and pressed together to create sheets of approximately our A4-A3 format, which were pasted together to form a roll. These rolls were of varying sizes and could even reach 30 metres in length, capable of containing thousands of lines of text. 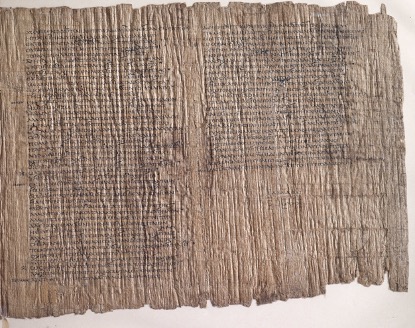 Portions from Book 24 of Homer’s Iliad in a deluxe papyrus scroll of about 230cm long: Papyrus 114 (Egypt, 2nd century CE)

One of the British Library’s longest undivided papyrus scrolls is a beautiful deluxe copy of a portion from Homer’s Iliad which is over 230cm long. The scroll provides an excellent example of the standard layout of Greek and Latin texts for more than a millennium. Written in parallel columns across the sheets, a papyrus scroll would usually contain one large unit (“a book”, in Greek biblion) of a work. In ancient libraries, scrolls were stored rolled up on a shelf with a leather label (sillybos) identifying the title of the book, which functioned in the same way as titles printed on the spines of our books today.

The papyrus scroll was the default format of book across the Mediterranean for more than two millennia, recording texts not only in Greek and Latin but also in Egyptian or Hebrew. However, there was a new invention in the making that would revolutionize the book’s history – and that was the codex.

It all started with wooden tablets. Coated with smooth beeswax, these wooden boards were often used to record everyday texts that were not important enough to be put on the expensive papyrus rolls. Letters were scratched in the wax with a metal stylus and could be easily erased using the other, flat end of the stylus. Due to this efficient reusability, wax tablets were especially popular in schools. 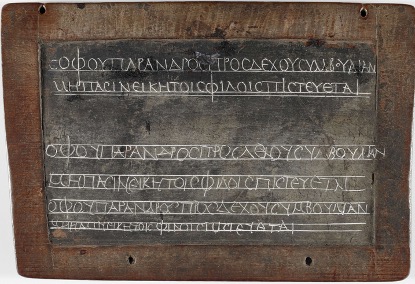 A set of two wax tablets once bound together containing the homework book of a child in Greek: Add MS 34186 (Egypt, 2nd century CE)

In this little homework-book from about 2000 years ago, which was one of our favourite objects of the Writing exhibition, the teacher wrote literacy and numeracy homework on two tablets. They would have been carried home by the children and back to school to present the completed homework to the teacher. The two wooden tablets were bound together with string, producing a booklet with pages which was often called a codex after the Latin word caudex (wood-block). This little booklet not only preserves the Greek homework of a pupil from 2000 years ago, but also foreshadows a future format that would swiftly take over from scrolls.

5.) A composite: booklets of papyri

It was probably the arrival of Christianity that prompted the next major change in the history of the book. With its strong emphasis on textual interpretation, Christianity required books that allowed for easy and accurate navigation of the texts of the Old and New Testaments.

A leaf from a papyrus codex containing the Gospel of John: Papyrus 2484 (Oxyrhynchus, Egypt, 2nd century)

Although the earliest copies of the Old and New Testament were handed down in the traditional format of a papyrus scroll, from the early 2nd century a new composite format was developed to hold the books of the scriptures: a little booklet of bound papyrus leaves. These papyrus books, called codices after the bound wax tablets, were usually small and contained only selected portions of the Old or New Testament either for personal or liturgical use, and not the entire Bible as we know it from our printed copies.

Bringing all the books of the Old and New Testament together as one authoritative new book, called the Bible (Biblia) containing all the books (ta biblia in Greek) of the Scriptures, was way beyond the capacities of a simple papyrus booklet. A new writing support was needed to accommodate all these texts in one bound volume – and that was animal skin.

Legend has it that when Egypt placed an embargo on its export of papyrus in 197BC, the librarians of the city of Pergamon (in present day Turkey) started to use animal skin to copy their books, which they called pergamen (i.e. parchment) after their own city. It was this more expensive but more durable material that was to replace the fragile papyrus leaves of the early booklets to create the direct predecessor of the books on our shelves. 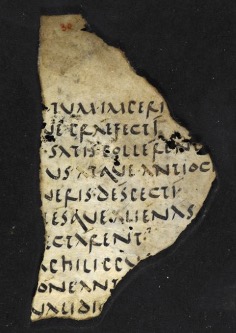 The iconic manifestation of this long process is one of the world’s earliest Bibles, Codex Sinaiticus. Copied possibly in Palestine in the early 4th century, it is the earliest surviving manuscript to contain the complete New Testament and the oldest and best witness for some of the books of the Greek version of the Old Testament. The Codex originally contained the entire Bible in Greek. Its name (‘the book from Sinai’) refers to the monastery of St Catherine at the foot of Mount Sinai where it was preserved until the middle of the 19th century. Beside its utmost importance for the textual history of the Bible, Codex Sinaiticus is a milestone in the history of the book. 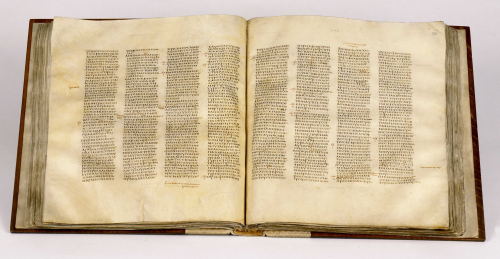 Codex Sinaiticus is an iconic monument in the history of the book, marking the shift to the format of book that has predominated for the last 1700 years. The manuscript still shows its roots in the culture of papyrus scrolls. For example, the eight parallel columns of text on each double-page opening correspond to the portion of text that was opened for reading on a papyrus scroll. However, when complete, Codex Sinaiticus probably had at least 730 parchment leaves, carefully prepared from the skins of about 365 sheep. With hundreds of leaves, once bound between two heavy wooden covers, Codex Sinaiticus was revolutionary. It shows all the major benefits of a codex book over the ancient format of the scroll. The clear pages of the volume allow for easy navigation of both the Old and New Testament. The texts are neatly prepared and numbered. It may have even contained a detailed index, called canon in Greek, to the gospels.

In addition to the New Testament and substantial parts of the Old Testament now held in the British Library, parts of Codex Sinaiticus are also held in Leipzig University Library, St Catherine’s Monastery in Sinai, and the National Library of Russia in St Petersburg. The manuscript is now fully digitised and transcribed, and available at an interpretative website produced as a collaboration between the four institutions.

Codex Sinaiticus represents the close of the era of papyrus rolls and the opening of a whole new chapter in human history which, after the invention of paper and printing, eventually takes us to the bound book you may have next to you right now. Opening it in your bed tonight, remember the long history of your familiar companion, going back through handwritten parchment codices, papyrus booklets, wax tablets and stone inscriptions. This is a history of which you are now a part.

To discover more about the history of the book and the British Library's amazing ancient collections, explore our Greek manuscripts and A history of writing webspaces.

Posted by Ancient, Medieval, and Early Modern Manuscripts at 1:17 AM