Some of the finest examples of medieval book art are Bibles. Medieval scribes and artists illustrated biblical manuscripts in order to adorn and elaborate the sacred text, as you can discover in our Biblical Illumination article on the Discovering Sacred Texts webspace. A particularly impressive example is the Worms Bible (Harley MS 2803). With pages measuring 540 x 355 mm, this is one of a number of giant multi-volume Bibles that were produced throughout Western Europe in the late eleventh and twelfth centuries.

The Worms Bible includes a seventeenth-century inscription recording that it belonged to the Augustinian abbey of St Mary Magdalene in Frankenthal, about ten kilometres (six miles) south of Worms. Frankenthal was an important scriptorium, and this Bible may have been made at the Abbey. There is a very small inscription on the first folio before the text proper, right on the edge of the lower margin, recording the date of 1148 (anno MCXLVIII), which was probably when the work was either begun or completed. 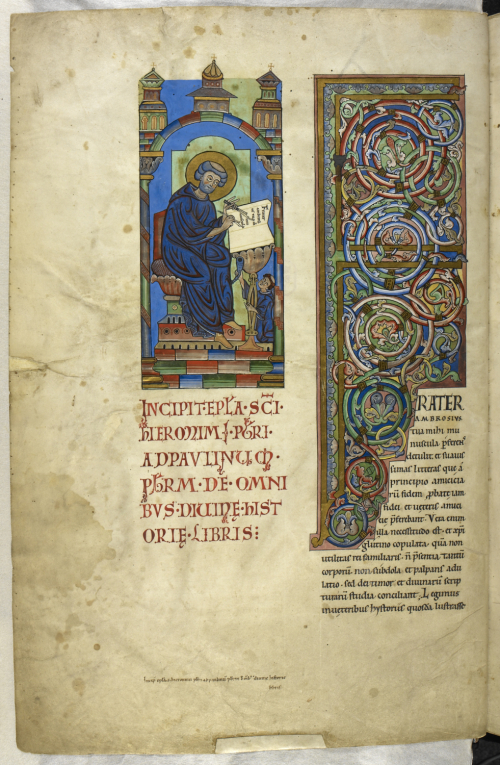 Prefatory letter at the beginning of the Worms Bible, with a miniature of St Jerome writing at a desk and a decorated initial 'F', Harley MS 2803, f. 1v 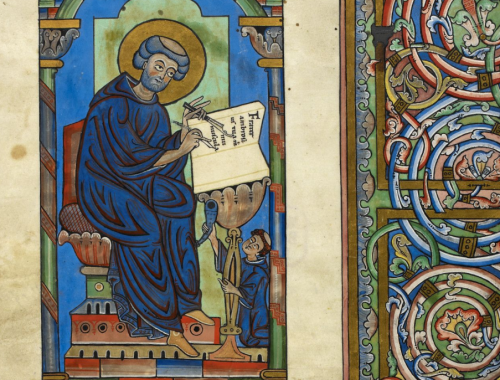 Detail of St Jerome writing at a desk, with a tonsured monk holding up an inkwell to him, Harley MS 2803, f. 1v

Like most Vulgate Bibles, the two volumes of the Worms Bible include several letters by St Jerome arranged as prefatory material. The first text is St Jerome’s letter to bishop Paulinus of Nola (d. 431), in which St Jerome urged Paulinus to study the Scriptures diligently, to live in and meditate on them (inter haec vivere, ista meditari). It begins with a large illustration of St Jerome seated as a scribe writing (f. 1v). Here St Jerome holds a quill pen and a knife with which to make corrections. A small tonsured figure, perhaps the commissioning abbot, holds up an ink horn to St Jerome to supply him with ink for his task.

On the pages of his open book, we can see that St Jerome is writing the first words of the letter: ‘Frater ambrosi/us tua m[ih]i mu/nuscula’ (Brother Ambrosius [has delivered your] your little gifts to me). Immediately next to the scene is a large letter ‘F’(rater) that begins the text itself. The letter is embellished with bright stylized acanthus leaf decoration interwoven around the gold bars of the letter. Characteristically Germanic gold bands with small round dots are cinched around the foliate forms. 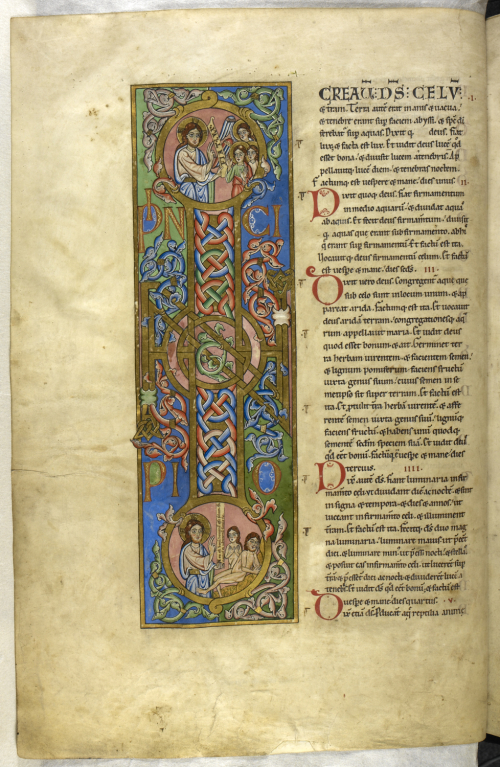 The creation of light above, and the Creation of Eve below, in the initial ‘I’(n), at the beginning Genesis, Harley MS 2803, f. 6v 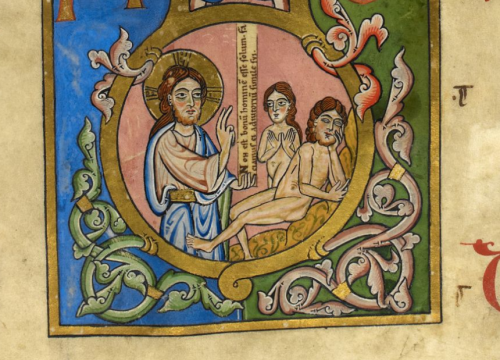 In the large initial beginning the book of Genesis a few pages later, tight scrolls join the foliate decoration, and the illustrations move into the initial ‘I’(n) itself (f. 6v). The second word of the text, ‘principio’ ([in] the beginning), is also displayed in the panel of decoration. Two scenes from Genesis are included: at the top of the letter, God orders ‘FIAT LUX’ (let there be light), while below, God creates Eve from Adam's side while the speech scroll contains his observation that ‘Non est bonu[m] homine[m] esse solum fa/cimus ei adiutoriu[m] simile sui’ (It is not good for man to be alone: let us make him a help like unto himself, Genesis 2:18). Skin tones are shaded in green and pink, and the painting contains fine details, such as the incision on the sleeping Adam’s side from which Eve, who stands behind him, has just emerged. 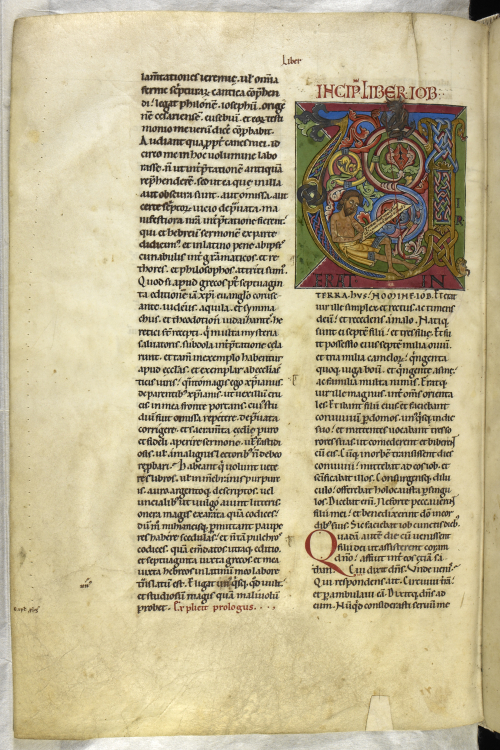 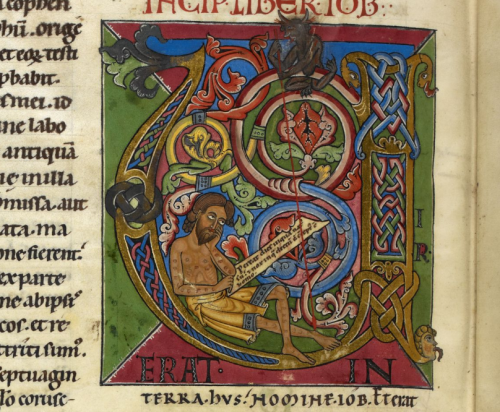 These features of the stylized acanthus, clasps, colours, and modelling of tones are found in the other large initials that begin each biblical book. Most depict the book’s author, often writing or holding a scroll with a quotation from his text. For example, Job reclines in the initial letter of his book, covered with sores with a devil tormenting him (f. 288v). He laments: ‘pereat dies in qua nat[us] su[m] et nox in qu[a] dictu[m] e[st] c[on]cept[us] e[st] homo’ (Let the day perish wherein I was born, and the night in which it was said: A man child is conceived, Job 3:3).

The Worms Bible was exhibited in Mannheim in 2013, and was featured in blog about the exhibition at that time. You can view both volumes on the Digitised Manuscripts website, and discover more about the production of medieval manuscripts in our article, How to make a medieval manuscript. For more about this Bible, see Scot McKendrick and Kathleen Doyle, The Art of the Bible: Illuminated Manuscripts from the Medieval World (London: Thames & Hudson, 2015), no. 21.