Medieval rabbits: the good, the bad and the bizarre

As this year’s Easter egg hunt is over, join us in a hunt through the pages of British Library manuscripts for some seasonal rabbits. Searching in our Catalogue of Illuminated Manuscripts yielded an amazing 80 images – they are everywhere! We found rabbits in the margins of prayer books and law books, in the borders of romances and chronicles, and even playing a supporting role in saints’ lives. Here are some of our favourites: from the cute and cuddly, to the dangerously criminal and the wonderfully weird.

Each page of the Cocharelli Codex is decorated with features of the natural world, such as foliage, flowers, insects, birds, animals and seashells. The glorious meadow on this page includes a caterpillar, a dragonfly and two life-like hares.

Beasts of the earth

Medieval bestiaries are works containing images of animals with descriptions their attributes. The rabbit is described as ‘a wild and lithe beast’. In this image, Adam is naming a group of animals, including the rabbit, showing that man was considered lord over beasts. 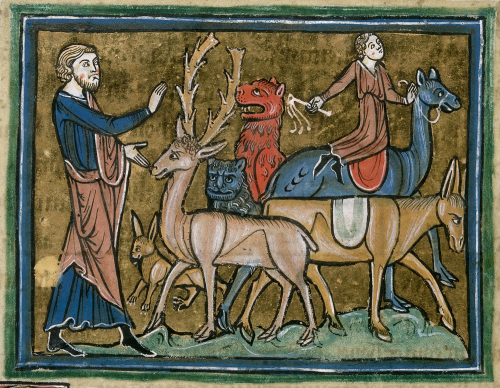 The British Library has a number of highly decorated books containing scenes from rural life in the Middle Ages. Such scenes often contain images of rabbits, showing how important these creatures were in the rural economy: they were farmed for their fur and meat and hunted with hounds or ferrets.

The Taymouth Hours contains a series of images of a lady hunting rabbits; here she sends a hound or ferret into a warren to flush out the rabbits inside.

This Jewish liturgical book, the Barcelona Haggadah, contains the Haggadah, as well as liturgical poems and biblical readings for Passover. A colourful miniature shows the Israelites building a tower, supervised by an Egyptian master, at the beginning of the passage, ‘We were slaves to Pharaoh’. Above is a rabbit seated on a throne, being served wine in a golden goblet by a dog. 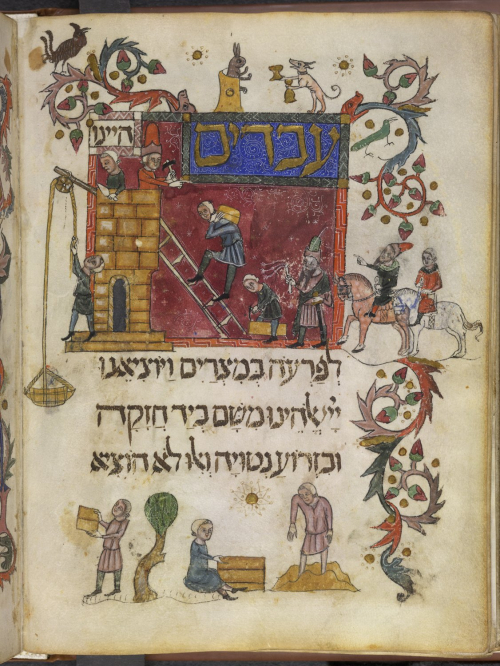 Rabbits are not always in the margins – sometimes they take part in the action, as in this illuminated Book of Revelations. At the beginning, the Angel appears to St John while he is exiled on the Island of Patmos, with rabbits and a deer watching, in a lush, green landscape 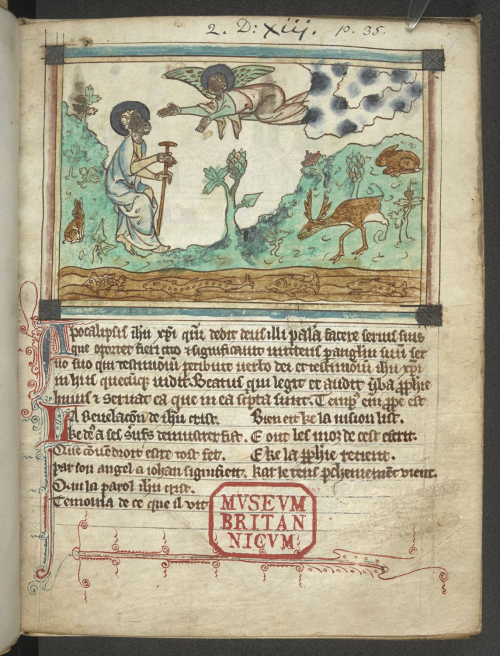 Rabbits and the saint

John Lydgate’s Life of St Edmund tells the story of his martyrdom and how his severed head was looked after by a friendly wolf until it was found in a thicket by monks with hunting dogs. This miniature shows St Edmund's head being found and reunited with his body, still pierced with arrows. The dogs have now begun hunting rabbits, who scamper to their burrows. 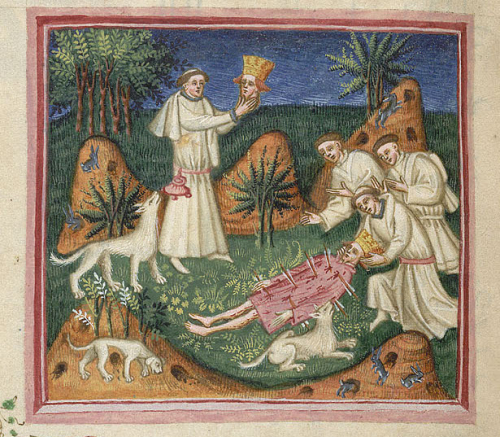 Rabbits in a romance

This manuscript of Roman de la Rose opens with a scene of the lover dreaming of the rose and the walled garden of delights. In the lower margin are rabbits being chased by hounds (again). But, not to worry - they will have their revenge – see below! 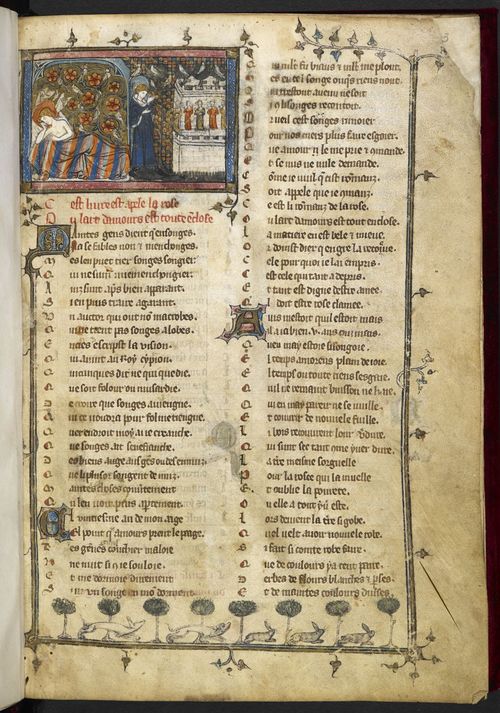 The Smithfield Decretals is a large volume of canon law with narrative scenes added in the margins by a London artist. Rabbit hunting is depicted several times, but finally the rabbits take their revenge! There are several images of rabbits with bows and arrows shooting their persecutors, and a three-page series of a hound being brought to justice. First, he is bound, then he is tried by rabbits in an outdoor courtroom, and on the next pages, he is executed. 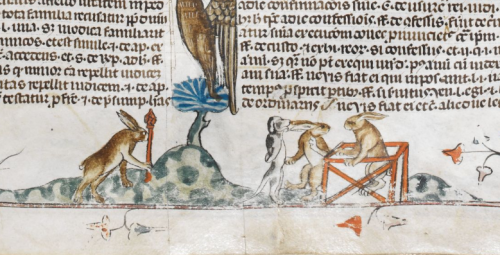 Trouble in a trumpet

We kept some of the weirdest rabbit images we found to last. This copy of the Holy Grail legend begins with a splendid illumination of Arthur’s court of Camelot and of Lancelot on his quest. Around the edges are scenes of jousting, a man shooting a butterfly, hybrid creatures, and in the upper margin, a naked man blowing a long trumpet out of which emerges…a rabbit! 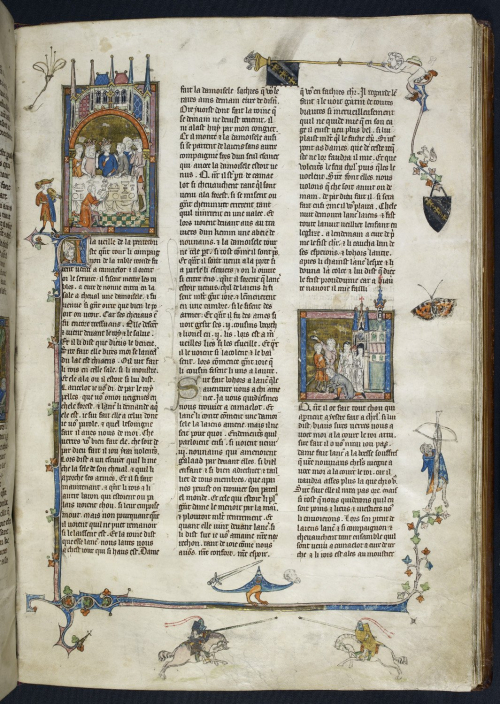 Detail of a rabbit being blown out of a trumpet from the margins of La Queste del Saint Graal, France, N., early 14th century, Royal MS 14 E III, f. 89r

This scene of a tournament with magnificent pavilions and finely-dressed knights is in a copy Froissart’s Chronicle. Look carefully, and in the decorative border are a rabbit and a snail jousting, both mounted on the shoulders of apes, in a parody of chivalric culture. Sadly, we could not include all the great images we found, but why not try a search of your own? Go to the Catalogue of Illuminated Manuscripts and search ‘Rabbit’ or ‘Rabbits’ in the 'image description' field. Be careful, though – despite their cute and cuddly appearance, some can be dangerous!