Today's Guess the Manuscript is relatively simple, we think. In which British Library manuscript is this page found? 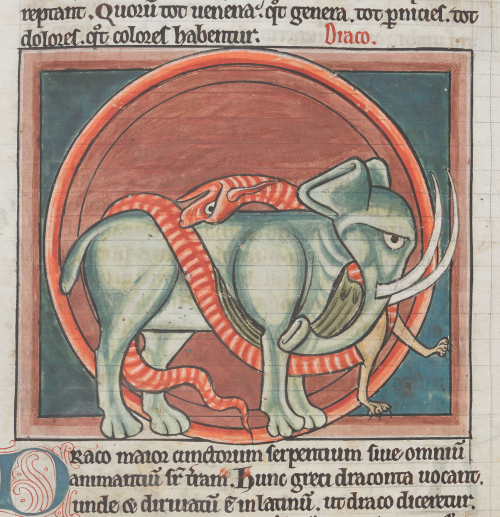 You can find the entire book on our Digitised Manuscripts site. If you're still having trouble, we suggest looking at our Medieval England and France, 700â€“1200 webspace, created in partnership with the BibliothÃ¨que nationale de France.

Have a guess by submitting a comment below, or tweeting us @BLMedieval (#GuessTheManuscript). Happy hunting!

The Polonsky Foundation England and France Project: Manuscripts from the British Library and the BibliothÃ¨que nationale de France, 700â€“1200

The Pageants of Richard Beauchamp, Earl of Warwick The manuscript contains 55 pen drawings, or â€˜pageantsâ€™, that chronicle Beauchampâ€™s life, from his birth and baptism to his death and burial, each accompanied by a short explanatory caption. The drawings are renowned for their sense of drama, their realism, and their immense detail. You could spend hours scanning their contents and discover all manner of interesting features, from jewelled crowns and embroidered dresses to elaborate heraldic devices and swords. At one point, the heart of St George even makes an appearance, preserved in a gilded monstrance (a vessel for holding relics). 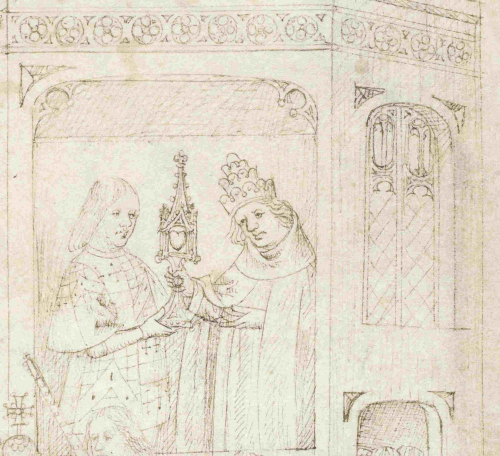 The manuscriptâ€™s drawings provide significant insight into many aspects of European court culture during the Late Middle Ages (roughly 1250 to 1500). Recent scholarship has used them as important evidence for the study of weapons and armour, banqueting, dress and heraldry, architecture, late medieval drama, and even the design of ships and the nature of naval warfare.

Richard Beauchamp, Earl of Warwick, greeted by the Doge of Venice, on his arrival to the city: Cotton MS Julius E IV/3, f. 8r (detail)

The pageants situate Beauchamp at the very heart of English political life, as a prodigious knight and general, as a major advisor to three English kings, as an ambassador travelling throughout Europe on behalf of the royal court, and ultimately as Lieutenant of France and Normandy and protector of the young Henry VI. 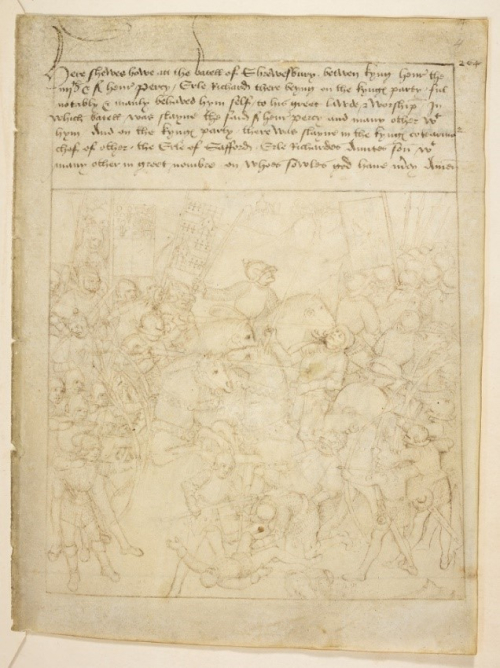 Several of the manuscriptâ€™s illustrations see Beauchamp fighting in significant battles and sieges that took place in England and France during this period. One, for example, depicts the Battle of Shrewsbury in 1403, in which Beauchamp fought on the side of King Henry IV against Sir Henry â€˜Harry Hotspurâ€™ Percy, ultimately defeating the rebel and securing the English throne for the Lancastrian forces. The mounted Beauchamp appears at the centre of the battle, charging directly into the enemy forces. 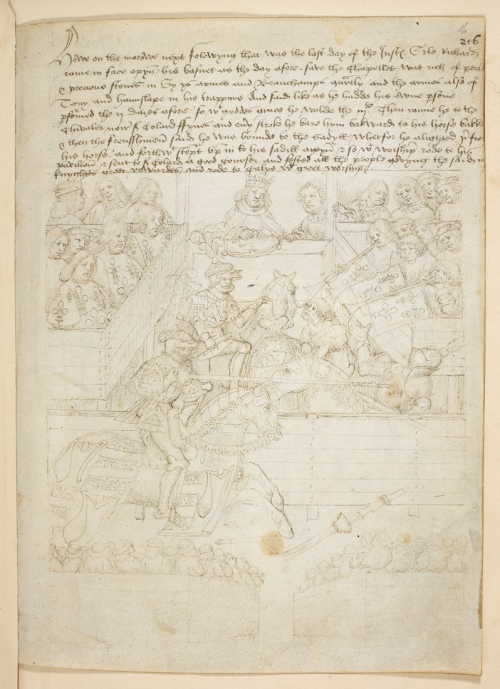 Beauchamp defeats a French knight during a tournament and is forced to dismount to prove he is not tied into his saddle: Cotton MS Julius E IV/3, f. 16r

Beauchamp acquired a reputation for engaging in chivalric behaviour and pursuits during his lifetime. Jousting and tournament scenes are notably prominent throughout the manuscriptâ€™s series of drawings. The Earl takes part in jousts in celebration of the coronation of Joan of Navarre as Queen of England, in a diplomatic mission to the Holy Roman Empire, and at a tournament before the French court, where he is shown defeating three French knights in quick succession. In this image, a victorious Beauchamp is forced to dismount from his own horse to prove that he has not been tied into his saddle, so astonished is the French court at his skill in the sport. 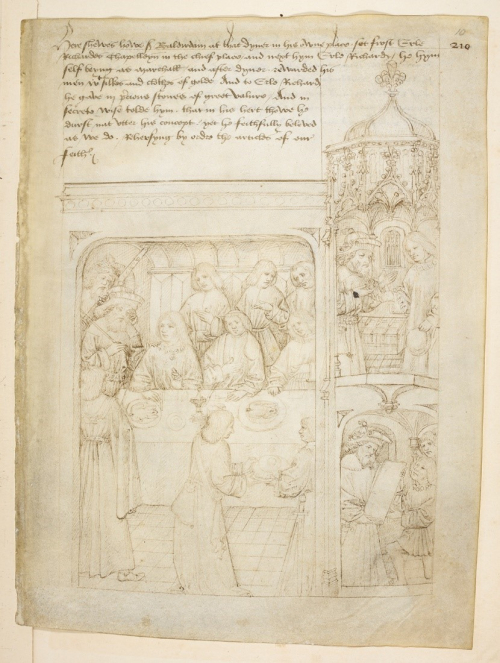 One of the major sequences of images in the manuscript focuses on the pilgrimage Beauchamp undertook to the Holy Land in 1408, which sees the Earl travelling across Europe and encountering various members of the nobility during his journey. Upon reaching Jerusalem, Beauchamp meets with the deputy of the Patriarch of the city, and visits the Chapel of the Holy Sepulchre. He then attends a banquet thrown in his honour by a certain â€˜Sir Baltirdamâ€™, a lieutenant to the Sultan of Egypt. At the conclusion of the meal, Sir Baltirdam offers Beauchamp and his men lavish gifts of precious jewels, silk cloth, and gold. 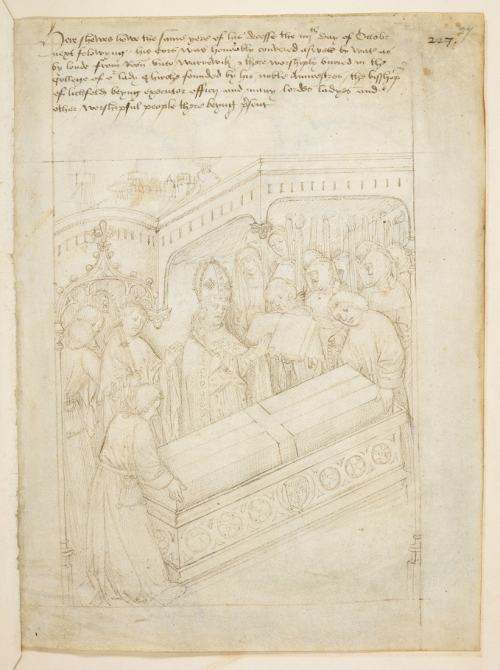 The final set of images in the manuscript takes a more sombre turn, depicting Beauchampâ€™s death and burial in 1439. Presided over by William Heyworth, Bishop of Lichfield, and observed by a crowd of mourners, Beauchampâ€™s coffin is shown being lowered into his tomb in the Beauchamp Chapel of St Mary's Church, Warwick. Both the chapel and the tomb survive to this day, the latter marked by an enormous bronze effigy of the Earl made during the 15th century. 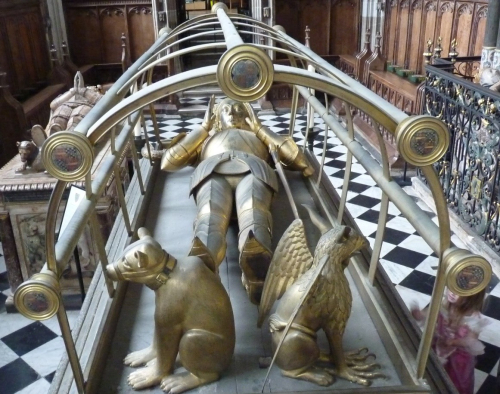 Our manuscript was probably commissioned by Anne Beauchamp, daughter of Richard Beauchamp and widow of Richard Neville 'the Kingmaker', Earl of Warwick (b. 1428, d. 1471), sometime between 1483 and her death in 1492. Its drawings have been linked to an artist now known as the 'Caxton Master', named after his illustrations of William Caxton's translations of the Metamorphoses of Ovid (Cambridge, Magdalene College, Old Library, MS.F.4.34) and the Mirroure of the Worlde (Oxford, Bodleian Library, MS Bodley 283). Later, the manuscript was owned by the herald Robert Glover (b. 1544, d. 1588), before passing into the hands of the great manuscript collector, Sir Robert Bruce Cotton (b. 1571, d. 1631). It was bequeathed to the nation by Cotton's grandson, Sir John Cotton (b. 1621, d. 1702). We are delighted that it can now be viewed in full online, for everyone to enjoy.