St George and the Garter

On St George’s Day (23 April) 1349, at St George’s Chapel in Windsor, the first annual assembly was held by the Order of the Garter, England’s oldest Order of Chivalry. Dedicated to George, the Order was founded by King Edward III (1312–1377) who wanted to revive the Knights of the Round Table of Arthurian Legend. Edward had appointed himself as the Order’s Sovereign, his son Edward the Black Prince (1330–1376) as Royal Knight, and 24 of his most loyal men as Knights Companions. He had chosen the French maxim ‘Honi soit qui mal y pense’ (‘Shamed be he who thinks ill of it’) as the Order’s motto, and a blue garter as its emblem, perhaps alluding to the girdle with which St George, according to medieval legend, had tamed a dragon before slaying it. 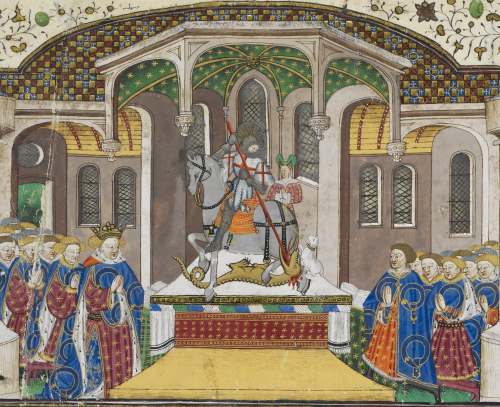 An assembly of Knights and Ladies of the Garter (women were accepted soon after the Order’s foundation), before an altar of St George (Rouen, 1444–1445): Royal MS 15 E VI (The Talbot Shrewsbury Book), f. 439r

The rituals and symbols of the Order of the Garter are described and depicted in many richly decorated medieval and early modern manuscripts. The Pageants of Richard Beauchamp (Cotton MS Julius E IV/3), for example, features an early depiction of the Order’s ceremony for installing new Knights. This ceremony requires the Sovereign, aided by senior Knights, to place the garter — a dark blue velvet riband with a gold buckle and edges — around the newly-elected Knight’s lower left leg, just below the knee. In this manuscript, King Henry IV can be seen giving the garter to Richard Beauchamp (1382–1439), 13th Earl of Warwick as a reward for successfully defeating the Welsh at the Battle of Shrewsbury in 1405. (You can read more about the Pageants of Richard Beauchamp in this blogpost.) 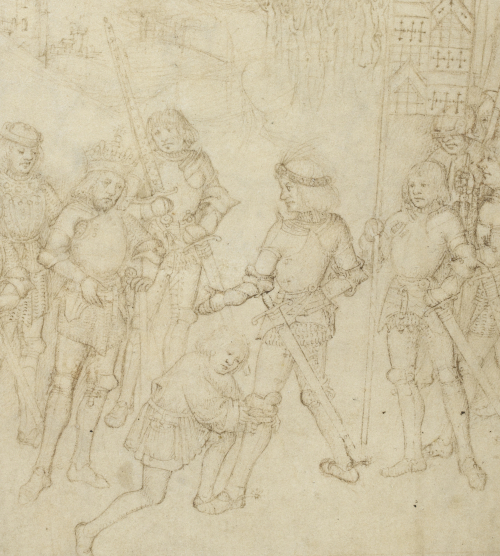 Many manuscripts describe the history of the Order of the Garter (Harley MS 5415) or explain its statutes and ordinances about membership, functions, qualifications, costumes and ceremonies (Cotton MS Nero D II, ff 252r–265v, Harley MS 235, Harley MS 278, Lansdowne MS 783, Lansdowne MS 1207). These books indicate that the Knights had few obligations, apart from attending the annual assembly, participating in religious services, and wearing the garter whenever appearing in public. Their privileges were both honorific and spiritual: members could hang their swords, helmets, banners, stall-plates with their names, and heraldic devices at St George’s Chapel at Windsor. After death, the remaining Knights would perform large numbers of masses (100 for Knights and 1000 for the Sovereign) for the benefit of their souls. 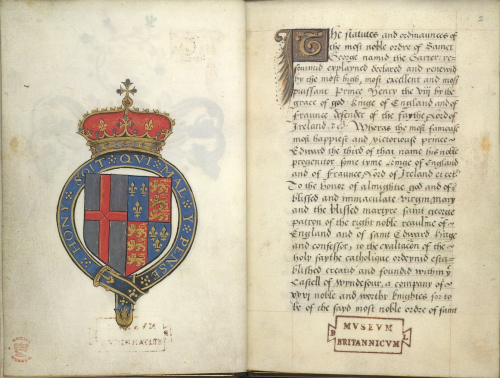 One important category of manuscripts relating to the Order of the Garter contains their members' coats of arms. Around 1415, the Order created its own officer of arms, known as the Garter King of Arms. In the 1430s, William Bruges (c. 1375–1450), the first to hold that office, created the Order’s first extant armorial, now known as the Bruges Garter Book (Stowe MS 594). The manuscript contains illustrations of the King and the 25 Founder Knights, all wearing heraldic tabards and Garter mantles and displaying their coats of arms. William Bruges himself, as the Garter King of Arms, is shown kneeling before St George. 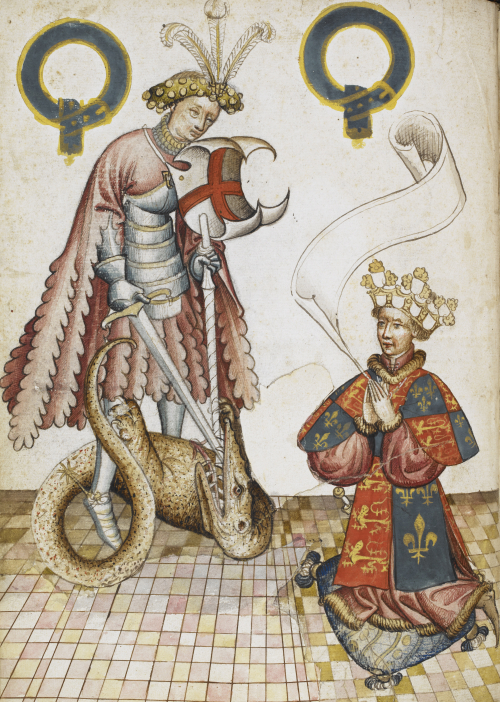 Other heraldic manuscripts from the Order contain collections of the arms of its then members. Their arms are easy to recognize since members had the right to encircle the shields (escutcheons) of their coats of arms with the blue garter, the Order’s emblem. 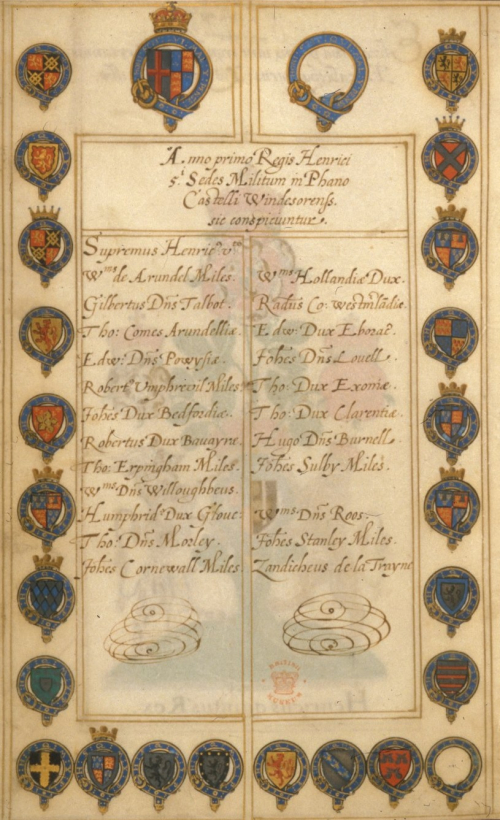 An important literary manuscript that is associated with the Order of the Garter’s early history is Sir Gawain and the Green Knight, perhaps the most famous medieval English romance. This Middle English poem sees Gawain, one of King Arthur's most valiant knights, undertake a quest during which he acquires a magical green girdle. Upon his return to Camelot, the Knights of the Round Table agree to wear a green sash in memory of Gawain’s quest, just like the Knights of the Garter, who would wear their garters on ceremonial occasions. What is more, an early owner of the unique copy of the poem (Cotton MS Nero A X) inscribed a motto below the text that is almost identical to that of the Order: ‘hony soit q[ui] mal penc’. This raises interesting questions about the poem's underlying meaning, and whether it comments on the ideals and practices of the Order. 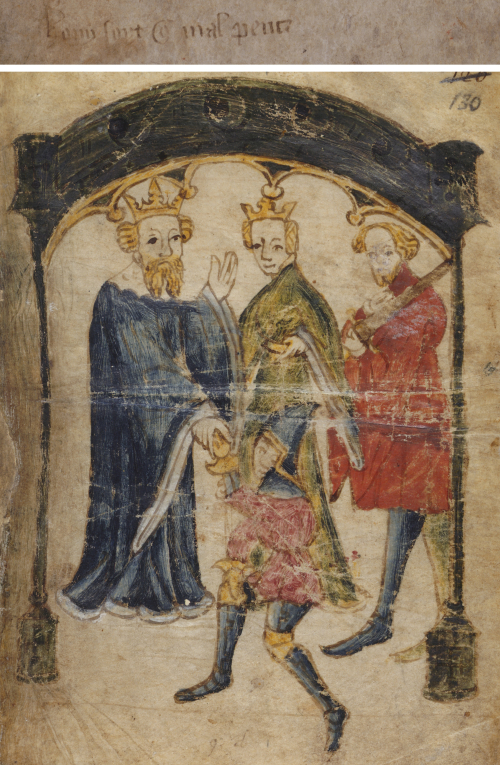 The Order of the Garter’s motto (above) and a full-page miniature of Sir Gawain returning to the court of King Arthur after completing his quest in Sir Gawain and the Green Knight (North-West Midlands, c. 1400): Cotton MS Nero A X/2, f. 128v and f. 130r

The Order of the Garter was celebrated in other poetic manuscripts. For example, we have a poem by William Tesshe of York, uniquely surviving in Harley MS 3437, in which he praises the Order’s Sovereign, Queen Elizabeth I, and honours each of its Knights separately. The manuscript is decorated with their coats of arms in colours and gold.

Another unique poem, extant in Harley MS 6103, is dedicated to George Villiers (1592–1628), who was Marquess of Buckingham and Lord High Admiral of England when he was admitted to the Order in 1620. The poem styles him as St George, his namesake, and claims that he too will curb ‘The conquerd dragon which hee [St George] leadeth tame’. An accompanying full-page illustration adorns Villiers with attributes that are rife with Garter imagery. It displays him as a knight wearing full armour, riding a horse with the arms of the Order on its caparison, holding a lance with a banner that displays St George slaying the dragon in one hand, and a dragon on a leash in the other. The dragon is apparently tamed by the garter that is hanging from its neck, suggesting an analogy between the Order’s emblem and the girdle with which St George subjugated his dragon. 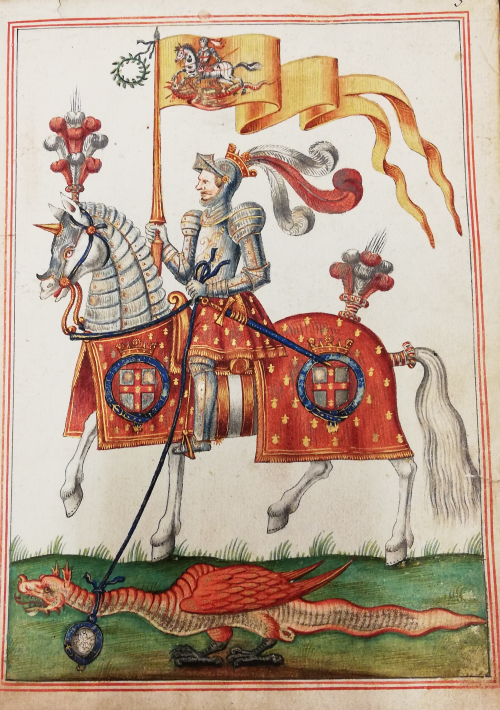 Music was central to the Order of the Garter’s religious celebrations at Windsor. The canons who performed its liturgical music produced original music compositions, and they were perhaps responsible for a creative and artistic rendering of a 16th-century melody for the Order’s motto (‘Honi soit qui mal y pense’) that has been inserted on a paper sheet into Royal MS 8 G VII. The music has been written on two 5-line staves that are shaped like the garter and a lance with which a knight charges a dragon. The composition is dedicated to the Earl of Arundel, probably Henry Fitzalan (1512–1580), the 12th Earl, who was admitted to the Order in 1544. 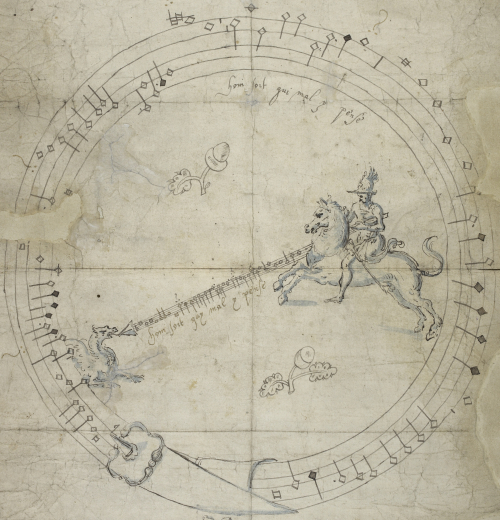 A canon for the Order of the Garter’s motto written on music staves that are shaped like the garter and a knight’s lance (England, 16th century): Royal MS 8 G VII, f. 1v

The Order of the Garter is nearly 700 years old. The rituals and symbols that its members practise today are preserved in manuscripts of great artistic and cultural value, many of which themselves date back centuries.