Medieval men and women often sought help from saints — holy figures who were considered to be miracle workers. Thousands of saints were venerated across Europe, and some of the most popular were known as the Holy Helpers. Written accounts of their lives typically told that, just before they died, they had asked God to grant their future worshippers specific forms of protection or rewards, and that a voice from Heaven or an angel had confirmed their requests. Their legends suggested that venerating them was a sure-fire method to obtain divine aid.

A cult of ‘Fourteen Holy Helpers’ was founded in the 14th century. It originated in the Rhineland (western Germany), before spreading to other European regions. The group’s number and members varied regionally but often included early Christians who had been martyred during Roman persecutions, such as Saints Christopher, Dorothy, Blaise, Apollonia, and Cyricus and Julitta. 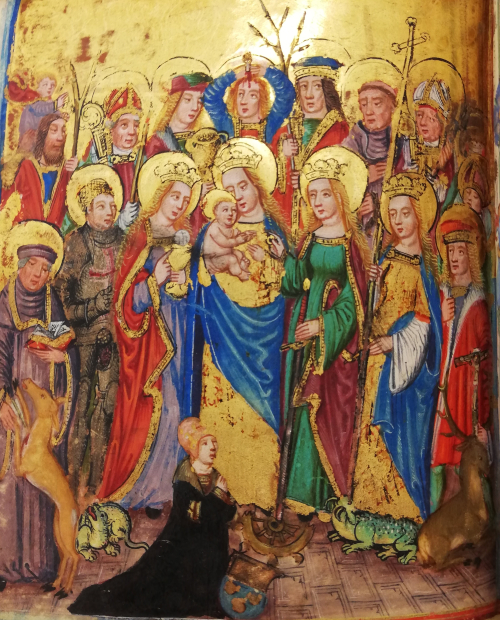 ‘God granted you while that you were here

to each of you remarkable privileges:

whoever prays to you wholeheartedly and sincerely,

to hear all their requests graciously

[and] remedy worldly dangers and misfortunes

Because of this remember in your special prayers

all those who have you devoutly in memory’

to ech of you synguler prerogatives

who prayeth to you of hool herte and enteere 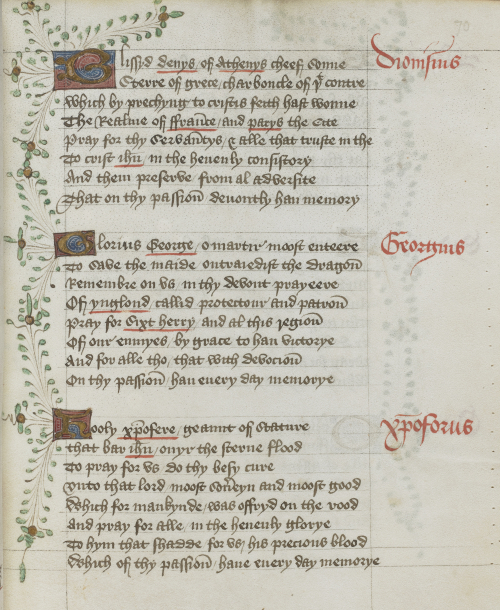 Late medieval English religious manuscripts often detailed how and what forms of protection could be obtained from individual Holy Helpers. An example of this is the prayer to St Christopher, patron saint of travellers, added to the 13th-century Mostyn-Psalter Hours (Add MS 89250). The prayer states that ‘wherever Christopher is venerated, snow, famine or plague, and evil death will not prevail there’ (‘ubi Christoforus memoratur / Vix fames aut pestis mala mors ibi non dominatur’ (f. 159v)). The 14th-century Neville of Hornby Hours (Egerton MS 2781) specifies that one needed to look at an image of St Christopher so as not to faint on that day:

St Dorothy, patron saint of gardeners, was believed to have secured protection for the homes of her followers. Those who wanted to gain her protection, according to a Latin poem added to a Middle English rendering of her life in Arundel MS 168, had either to write her name in or to place an image of her in their houses:

‘In whatever house the name or image of the excellent virgin Dorothy will be: no dead [or premature or stillborn] child will be born there, nor will the house experience fire, thievery or destruction, nor can anyone in there die from an evil death and the dying shall die with heavenly bread’ 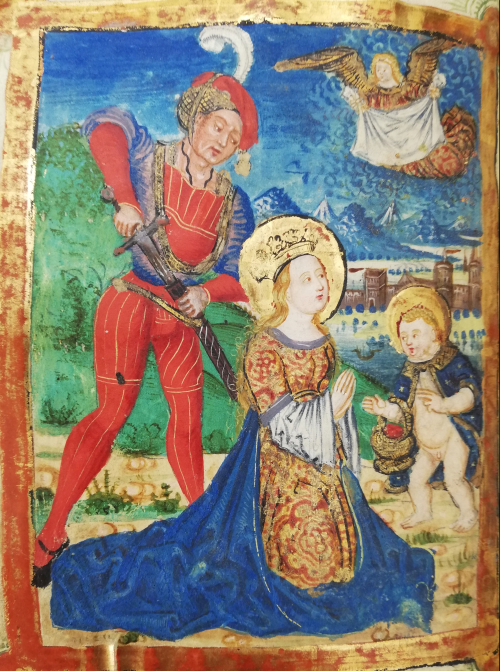 The protection of the Holy Helpers could also be invoked in medical contexts. St Blaise, according to the South English Legendary, had asked God that whoever venerated him and requested his help would be protected against obstructions in the throat. This explains why medical practitioners such as Thomas Fayreford (Harley MS 2558) added prayers for the saint to their recipes for throat ailments:

‘Lord Jesus Christ, true god, our father, through the virtue of the name and the prayer of St Blaise, your servant, deign to liberate your worthy male or female servant of the infirmity of the gullet, of the throat, of the uvula and of their other limbs, who lives and reigns, God throughout all ages. Amen. For this reason it is recited and say three Paternosters and Aves.’

St Apollonia can also often be found in medical manuscripts. It was believed that, while her own teeth were being smashed by her persecutors, she requested God to give her followers relief from toothache. Her protection is invoked in a spell against toothache (‘charme for þe tothache’) in Harley MS 1600:

‘St Apollonia endured a grave martyrdom for the Lord by a tyrant who shattered her teeth with iron hammers and in this torment she prayed to the Lord, that whosoever will wear her name on him will have no toothache’

St Jullita and St Cyricus, a mother and son who had been martyred together, were believed to offer protection for women in labour. Because of this, they were invoked on amulet rolls that pregnant women used as birthing girdles. Harley Ch 43 A 14 and Harley Roll T 11 both explain that the two saints had asked God to protect pregnant women who carried amulets of the Holy Cross on their bodies while giving birth: 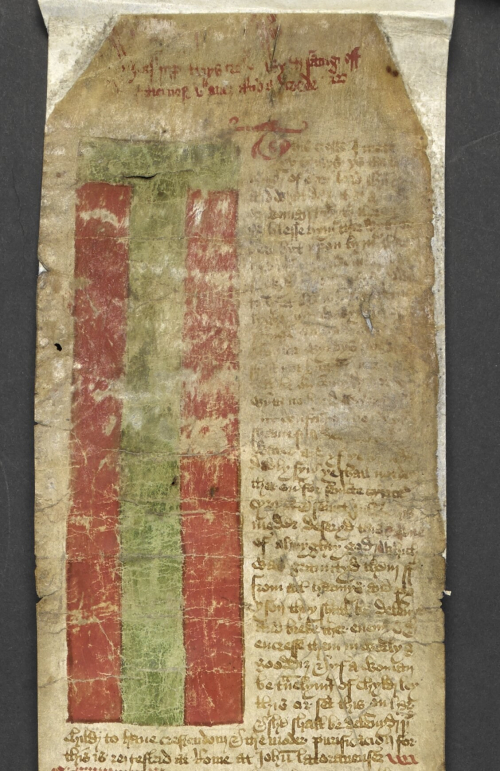 The requests for protection that the Holy Helpers were believed to have made to God for their followers formed the foundation for their joint cult. In England, it flourished during the 15th and 16th centuries when prayers dedicated to them identified more than 25 saints as Holy Helpers. This suggests that, whatever the effect of the prayers, spells and amulets that invoked them, their promises were important sources of hope, comfort and solace for those in need.

Posted by Ancient, Medieval, and Early Modern Manuscripts at 12:04 AM