An atlas fit for a Tudor queen

The Tudor period saw Britain transform into a major maritime power, boasting a formidable navy and sending ships on voyages of exploration around the world. With this transformation came a surge of interest in maps and map-making at the Tudor Court.

A few weeks ago, we announced that we had digitised the Burghley Atlas (Royal MS 18 D III), an important Early Modern collection of maps made for Elizabeth I’s principal minister Sir William Cecil. Today, we are highlighting another newly digitised item, widely regarded as one of the masterpieces of 16th-century cartography: The Queen Mary Atlas (Add MS 5415 A). 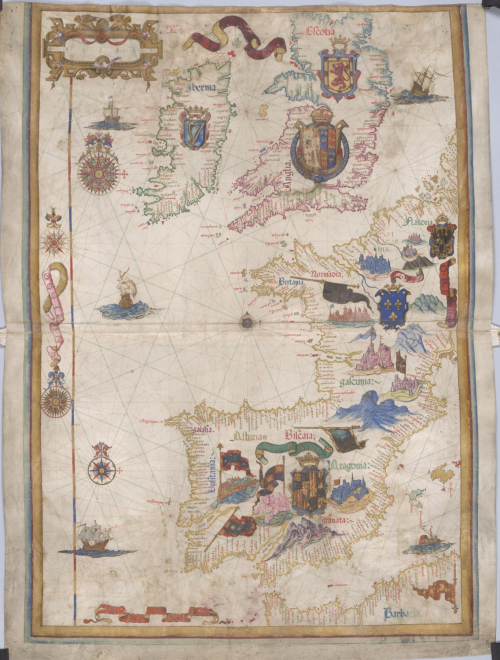 A map of the British Isles and the western coasts of Europe, with part of Belgium, Spain and Portugal, and the northern coast of Africa, from the Queen Mary Atlas, Add MS 5415 A, f. 10r

The Queen Mary Atlas was made by a Portuguese map-maker called Diogo Homem (b. 1521, d. 1576). After being exiled from Portugal in 1544 following a murder accusation, Diogo stayed in England and then in Venice. He made the Queen Mary Atlas between 1555 and 1558, most likely while he was still living in England.

The Atlas takes its name from Queen Mary I (r. 1553–1558), who is thought to have commissioned it as a gift for her husband Philip II of Spain (r. 1556–1598). However, it was not completed until after Mary’s death and was instead given to her sister Queen Elizabeth I (r. 1558–1603). One of the maps in the manuscript shows the arms of Spain, joined with England, resting over the British Isles. The arms of Spain have been visibly defaced. According to one tradition, the erasure of the Spanish arms may have been done by Elizabeth herself, whose navy famously defeated the Spanish Armada in 1588. 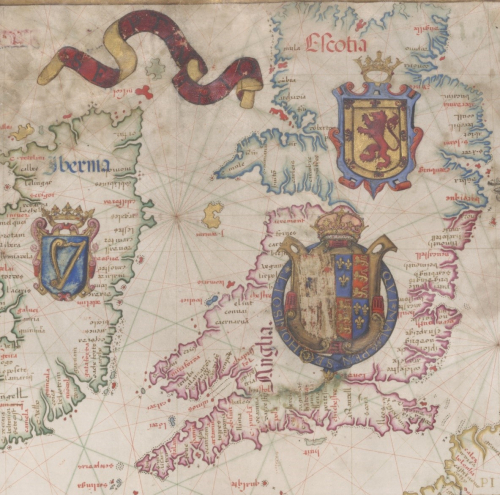 The Atlas consists of a total of nine maps. The first represents the extent of the whole world that was known in the mid-16th century. A Latin inscription within its decorative border reads: 'Form of the whole world and survey of the navigation of the lands of the Earth' (Universalis mundi figura atque navigationum orbis terrarium scitus). You can see that the Australian continent is completely missing and much of northwestern America is still uncertain.

Another inscription in the lower right-hand corner of the map features Diogo’s signature, indicating that he completed it in 1558, the year Elizabeth came to the throne. 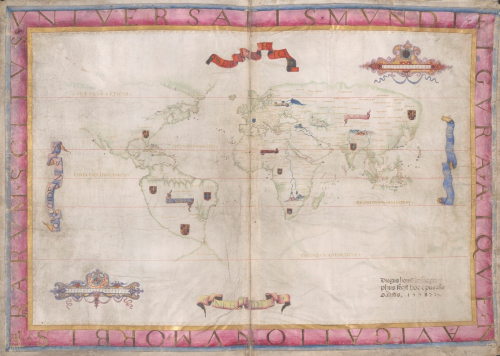 The remaining eight maps focus on specific regions or continents. Diogo highlights the coastlines of each country in these charts, outlining them in different colours: red, blue, green, orange, and in some cases gold. He also prioritises the locations of ports and islands over mainland cities and other topographical features, meticulously inscribing their names on the chart in minute lettering. 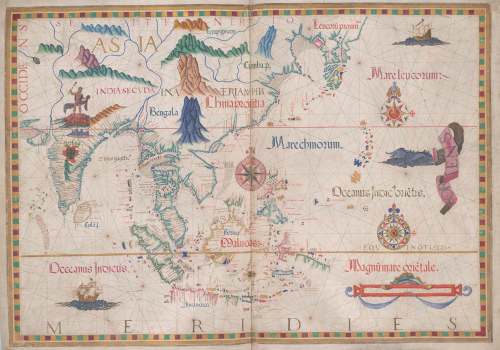 What marks the Queen Mary Atlas as one of the finest examples of cartography from this period is the richness of its illustrative details and embellishments. The seas, for example, feature numerous ships of various designs and sizes, from Spanish galleons to Ottoman barges. Some are even engaged in naval battles with each other. 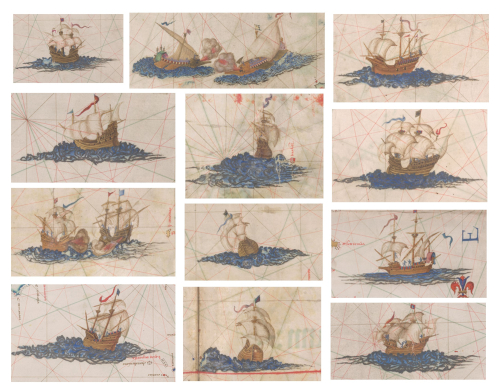 Illustrations of ships featured in the Queen Mary Atlas, Add MS 5415 A

Likewise, animals make frequent appearances, particularly in the maps of Africa and the Middle East. Northern Africa is home to a pride of lions and a pair of grazing camels. The lands around the Persian Gulf (modern-day Iran) include a tusked elephant walking through a landscape. Ethiopia features a black rhinoceros, whose distinctive skin has been represented as plated armour. 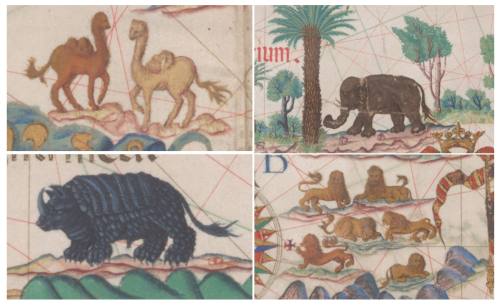 A pair of camels, an elephant, a pride of lions, and a rhino, from the Queen Mary Atlas, Add MS 5415 A

Then there are the sea monsters: scaled serpents, whales, sharks, and gigantic leviathans emerge from the waters and oceans. Perhaps they warn the viewer of the perils that might await a ship’s crew on the other side of the world. 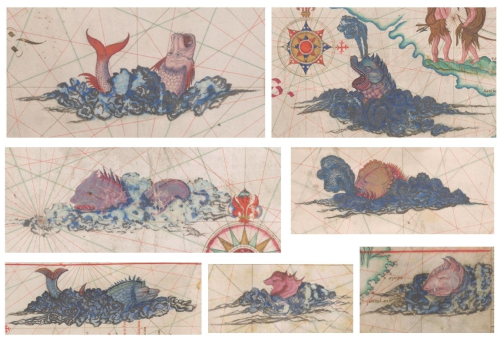 Sea monsters in the Queen Mary Atlas, Add MS 5415 A

Diogo includes detailed illustrations of some of the most prominent towns and cities, particularly those concentrated around the Mediterranean. They are represented with turrets and ramparts, and the domes and spires of churches and cathedrals, as well as the minarets of mosques in Arabia. In addition, each city is topped with the banner or heraldic arms of their ruling families and monarchs. The city of Rome (top right) with its seven hills, is decorated with the arms of the Papacy: the keys of St Peter below the papal tiara. 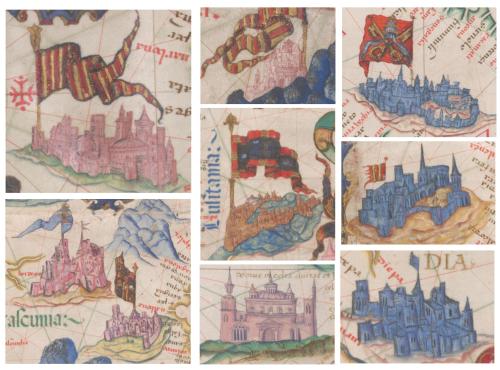 Cities represented in the Queen Mary Atlas, Add MS 5145 A

In addition to the maps, there are three double-page openings at the beginning of the manuscript devoted to tables and prefatory material. A large cosmographical wheel combines solar and lunar calendars. Tables of solar declination, which were used by navigators to establish the latitude of a ship at sea, appear as well. Finally, there is a particularly fine zonal map of the world, surrounded by ruddy-faced representations of the different classical winds blowing upon the globe. 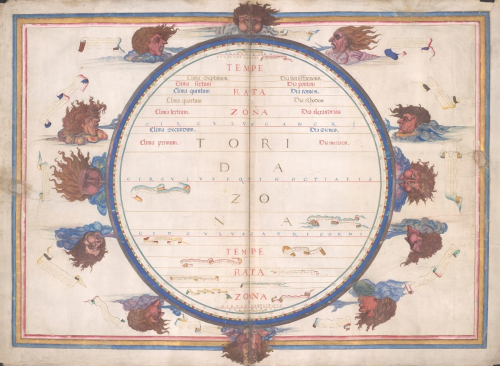 A zonal map of the world, with representations of the different classical winds, from the Queen Mary Atlas, Add MS 5145 A

With its nautical focus, marine monsters and topographical wonders, the Queen Mary Atlas shows us a world in which geographical knowledge was rapidly advancing and in which two Tudor queens sought to put Britain on the map. You can now explore the manuscript in full on our Digitised Manuscripts site.