Early in the 1400s, Ulrich von Pottenstein (c. 1360–1417), a clerk and chaplain to Duke Albert IV of Austria, translated into German a collection of Latin fables. Known in their expanded version as Das Buch der natürlichen Weisheit ('The Book of Natural Wisdom'), these fables describe the interactions between animals, humans, plants and the natural elements in order to teach moral lessons to their readers. One of the finest illustrated copies of this work, found in Egerton MS 1121, has recently been digitised. This manuscript, containing more than 70 fables, can teach us much about wisdom, beginning with:

(1) Listen to your sense of reason.

When the animals gather to choose the wisest, they divide into two factions. The land animals nominate the Fox and the birds elect the Raven. But the Monkey intervenes, explaining that they have chosen not with reason but with carelessness and poor judgement. They have allowed themselves to be misled, mistaking the cunning of the Fox and Raven for wisdom. 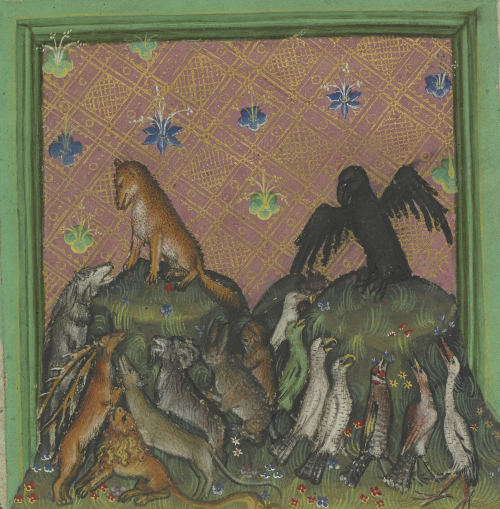 The Fox and Raven are chosen as the wisest animals: Egerton MS 1121, f. 4v

(2) Question things that appear to be certain.

The Fox plays dead in order to catch the Raven, who is sitting in a tree. The scavenging bird comes closer but, knowing the Fox’s cunning, inspects the ‘carcass’ from a safe distance. When the Raven notices that the Fox’s heart is beating, he drops a stone on his head and calls him out as a deceiver. The Fox, in turn, drops his charade. 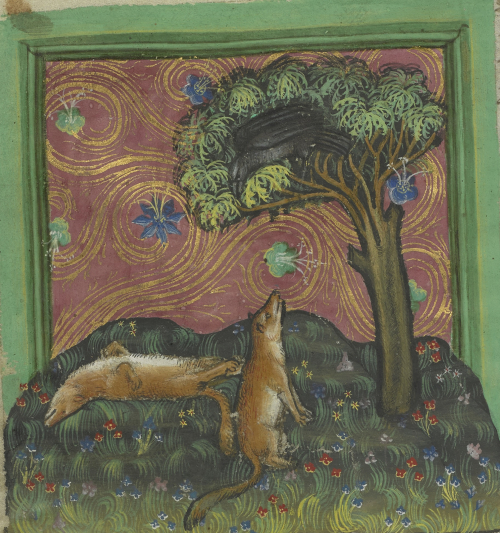 The Fox has remorse for his sins and decides to go on a pilgrimage. En route, the Dog, Donkey, Bear, Lion, Wolf, Swine and Peacock try to join him, but the Fox considers them imprudent and shakes them off. Instead, he chooses wiser animals as his fellow pilgrims: the Ant, Tracking Dog, Ox, Hedgehog, Hare, Lamb, Monkey and (multi-coloured) Panther. The Fox explains that, if you keep company with the wise and holy, you will become wise and holy as well. 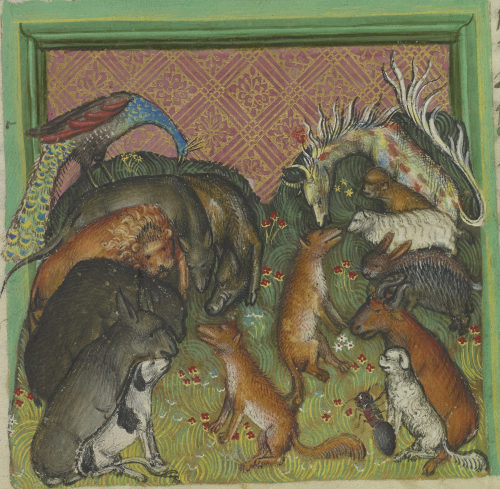 The Monkey decides to follow a sailor into the mast of a ship. The Raven warns against it, but the Monkey ignores the advice, falls down and hurts himself. He then sits on a king's throne, ignoring the warning of the Fox. Only when he is thrown off and bitten by dogs does he realise that he should listen to sound advice. 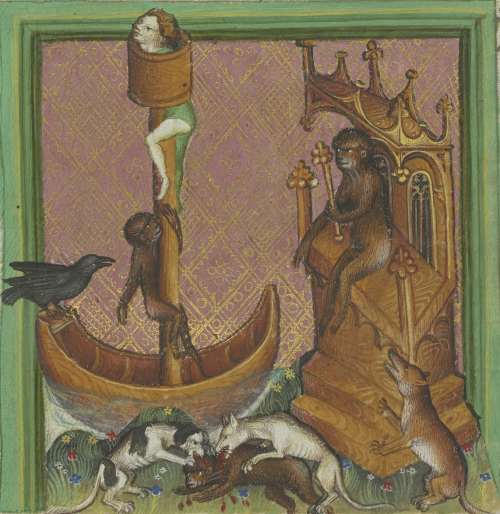 (5) Don’t put yourself above others.

A Cloud, newly born from the Earth, leaps high up into the air. Her mother, Earth, implores her to return. But the Cloud answers that she wants to raise herself above all the things in the natural world. The Earth then teaches her that those who exalt themselves will fall deep. Even the Sun, which raises itself high into the sky, goes down. It is better to be humble. As a reminder of this, Nature has placed the human heart and feet, that keep the entire body going, below the head. The Cloud is persuaded and lets herself fall back to Earth. 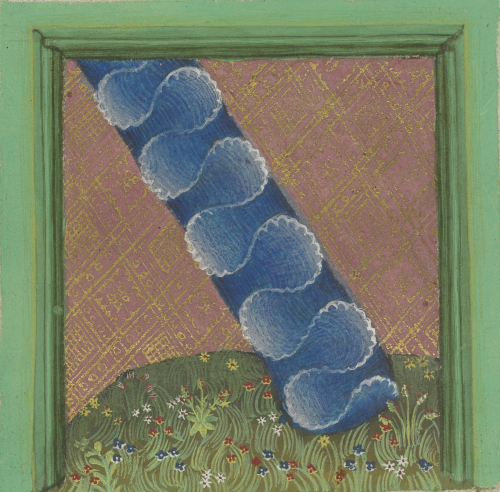 (6) Use your powers wisely.

A fish with razor-sharp teeth tells the Swordfish that he would like to have a sword as well, in order to rob others. The Swordfish replies that it would be best if the other fish doesn’t have a sword or even teeth: corrupted hearts always take the opportunity to use the good things they have for evil purposes, turning their own luck into unhappiness. 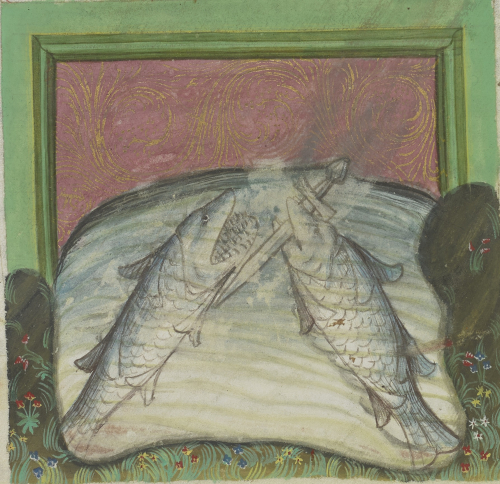 Having devoured yet another prey, the gluttonous Crocodile lies sleeping with its jaws open. The bird ‘Scrofilus’ seizes its opportunity, crawls inside the Crocodile’s mouth, and mortally wounds him from the inside. The Crocodile wakes up and asks why the bird has injured him. Scrofilus explains that those who always desire more always lose more than they gain. Alexander the Great, who conquered the whole world, always wanted to possess more lands; he was never satisfied and became poor in heart as a result. 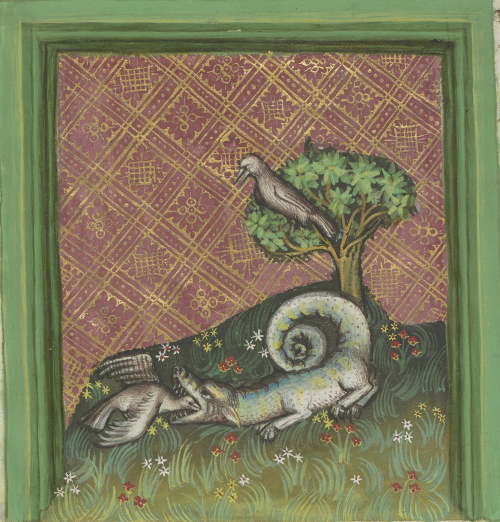 (8) Wealth always comes with a price.

The Monkey wants to grow a long tail like that of the Fox. But he then meets the Elephant who has removed his tusks to avoid being used in battle; the Swallow whose stomach has been cut open for the precious ‘swallow stone’ (Chelidonius); the Beaver who has removed his testicles to escape hunters looking for his castoreum; and the Peacock whose shiny tail has been cut off. The Monkey realises that wealth always comes with suffering and forgets about the tail. 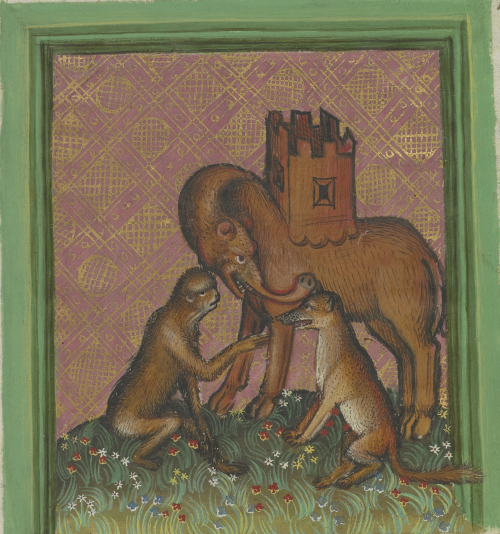 The Gourd is proud to have reached the same height as the 100-year-old Palm within only a few summer days. The plant thanks Nature for allowing him to grow so quickly. But the Palm hears the Gourd’s boast and replies that what grows quickly will also wither quickly. The Palm gives the example of the quick-growing fish ‘Effimer’ (Ephemeral) that only lives for one day, and the slow-growing elephant that lives for 300 years. 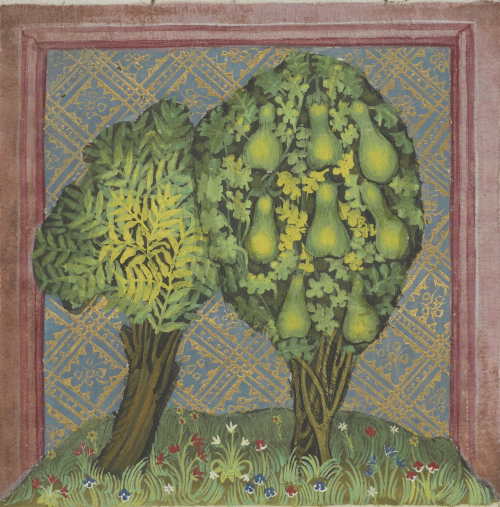 (10) Seek treasure inside yourself.

A Youth wants to get rich by visiting the ‘Golden Mountains’ in India. Upon reaching the emerald-covered mountains of pure gold, an Old Man warns him that all visitors are killed by griffins, fabulous creatures with the body of a lion and the head and wings of an eagle. The Youth is downcast but the Old Man explains that he already carries the greatest treasure inside his own heart. If he listens to his heart — and not greed — he will only seek pure goodness and not gold. Because gold only leads to vice, the peaceful Brahmani (‘Bragmani’) dispose of their gold in deep lakes and Nature hides it from mankind deep inside the Earth. The Youth thanks the Old Man for helping him find true treasure and no longer desires material wealth. 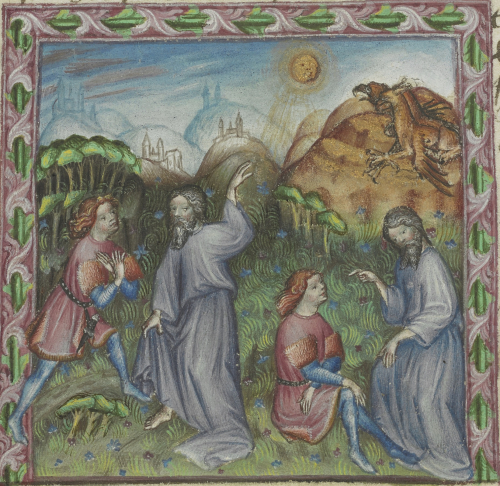 The Old Man warns the Youth about griffins in the Golden Mountains: Egerton MS 1121, f. 114v

Follow your voice of reason, avoid bad company and tricksters, listen to good advice, stay humble, live a measured life, take time to grow, and look inside your own heart. That’s the path to Natural Wisdom.