How to be a hermit

When John Donne famously remarked that ‘no man is an island’, he meant, in a literal sense, that no person is isolated. The word ‘isolate’ comes from the Latin insulatus ('insulated'), which came, in turn from insula ('island'). Insulatus became Italian isolato, which gave us the Modern English ‘isolate’. Many of us are currently feeling the pain of being islands, isolated from family or friends. But, throughout history, many cultures have construed isolation as having a symbolic power. This tradition was especially strong in the Christian West in the Middle Ages, when people chose to 'island' themselves to bring them closer to God.

Medieval Christian solitaries often sought to emulate Biblical examples. The Old Testament prophet Elijah was visited by an angel who told him to travel for forty days and forty nights to Mount Horeb. There he dwelt in a cave and heard the voice of God (1 Kings 19:7–10). Elijah’s retreat was emulated by later figures. For instance, John the Baptist retreated into the desert in fulfilment of a prophecy of Isaiah that he would be a ‘voice of one crying in the desert’. There he wore camel skins, fed on locusts and wild honey, and preached penance, before he baptised Christ in the River Jordan (Matthew 3:3–13). Christ also famously emulated Elijah’s forty days and forty nights when he was tempted in the wilderness by the Devil (Matthew 4:1–11). 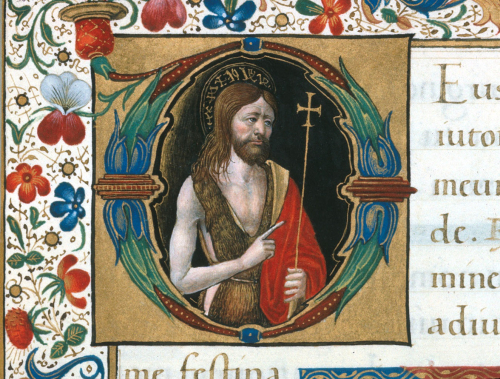 In the 3rd  and 4th centuries, a group of people retreated into the Egyptian desert to pursue lives of isolation. E. A. Jones has noted that, when Christianity was adopted as the official religion of the Roman Empire under the Emperor Constantine (r. 306–337), it 'lost its dangerous, ‘edgy’ status as a countercultural movement', so that devout Christians could no longer seek martyrdom (Hermits and Anchorites in England, 1200–1550, Manchester University Press, 2019, p. 2). Consequently, they sought other forms of martyrdom in regimes of self-discipline and the denial of bodily desire. These figures saw themselves as spiritual athletes (many Christian writers of this period used the term askesis, which was originally used of athletes training for a contest), intent on difficult and arduous labour in the pursuit of spiritual perfection.

Perhaps the most famous of the Desert Fathers was St Anthony of Egypt (c. 251–356), who is often considered the ‘founder of monasticism’. He made his life in the wilderness, where he was soon joined by followers with whom he formed an early monastic community. Like many hermits, he is said to have undergone demonic torments, including being tempted by devils in the shape of beautiful women and wild beasts. He is the patron saint of animals, skin diseases, farmers, butchers, basket-makers, brush-makers and gravediggers. 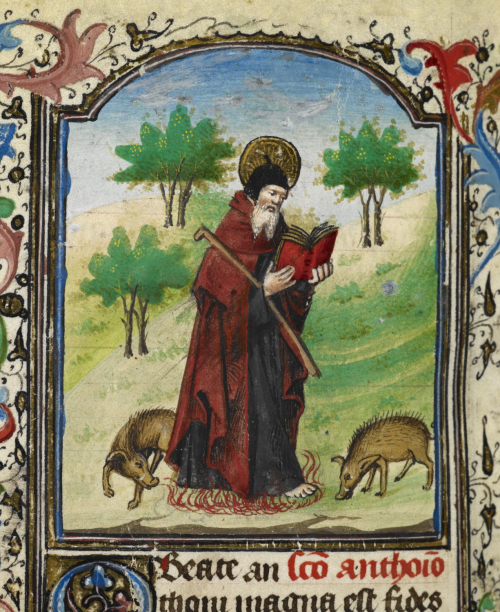 Alongside these Desert Fathers, there were also Desert Mothers. Perhaps one of the most engaging stories is that of St Mary of Egypt. Mary lived in the city of Alexandria, where she led a dissolute life for 17 years, ‘lying in the fire of promiscuity’ as the Old English version of her Life puts it. One day, she saw a large crowd of people hurrying to the sea to board a boat. They told her they were going to Jerusalem to venerate the Cross and she decided to join them, but not necessarily for religious reasons. In the Old English translation of her Life in Cotton MS Julius E VII, Mary describes how, ‘I saw ten young men standing together by the shore, good-looking enough in body and in demeanour … for the pleasure of my body’ (translated by Hugh Magennis, The Old English Life of Saint Mary of Egypt, University of Exeter Press, 2002, pp. 85–87). Mary travelled with them, but in Jerusalem she experienced a religious conversion. Thereafter she retreated into the desert, where she lived for 47 years, subsisting on desert plants and wearing only ‘the garment of the word of God’, when the scraps of her clothes had withered away. You can read more about her in our blogpost Hairy Mary. 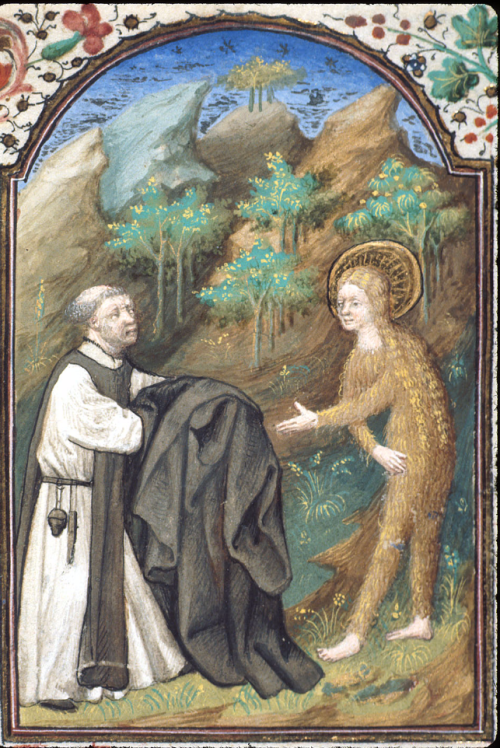 In early medieval England, a number of figures sought to emulate the Desert Fathers and Mothers. St Guthlac was a 7th-century Mercian who, after a life as a soldier, retreated to the East Anglian fens (presumably the closest approximation of a desert that rainy England could offer). There he lived in a disused barrow on an island, and dispensed spiritual counsel to those who visited him. The 8th-century Life of Guthlac by a monk named Felix described how he fasted often, eating only barley bread. He had terrifying visions of devils, which some modern scholars think may have been the result of ergot poisoning. (Ergot is a fungus which can grow on barley and produces a compound similar to lysergic acid or LSD.) Guthlac’s life is clearly modelled, to some degree, on that of St Anthony. The modern medical explanation for Guthlac’s torments is ironic, because St Anthony’s intercession was often invoked by sufferers of ergotism. 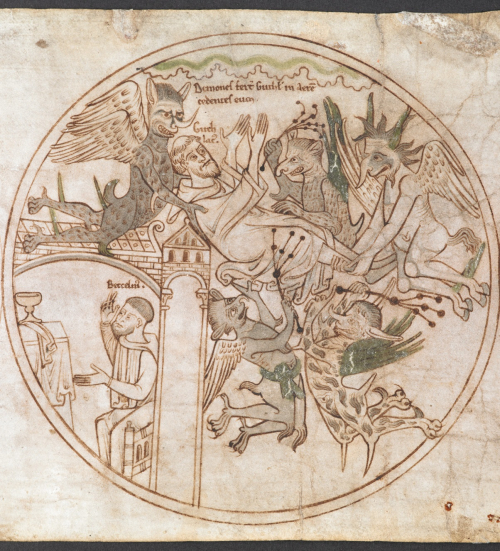 Each of these figures lived in isolated places away from human society. In England a form of eremitical life emerged around the late 11th century called anchoritism, which allowed people to live as recluses but within the fold of society. Anchorites or anchoresses (the female form) would permanently enclose themselves in cells attached to a church in order to live a life of prayer and contemplation. The word comes from the Greek ἀναχωρεῖν (‘anachorein’) meaning ‘to retire or retreat’. In their cells they lived a life of extraordinary restriction. They had a small window which looked onto the church, another which led onto a servant’s parlour (through which they could receive food and get rid of waste) and a third window on the church yard or street, from which they could dispense spiritual counsel. They were otherwise confined to a single room for what could be decades. You can read more about the lives of anchoresses on the Discovering Literature: Medieval website. 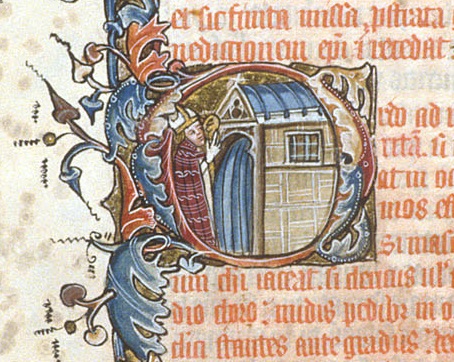 Miniature of an anchoress being enclosed, in a pontifical (England, 15th century): Lansdowne MS 451, f. 76v

Perhaps the most famous English anchoress was Julian of Norwich, who wrote the first work in English authored by a woman. During a period of illness in 1373, at the age of 30, Julian experienced visions of Christ. She recovered and composed a short account of her experiences. This account may have been submitted to ecclesiastical authorities when she applied for the right to become an anchoress. Her application was successful and she lived in a cell at St Julian’s Church in Conesford, in Norwich, for at least 20 years. During this time, she meditated on the meaning of her visions, producing a longer version of her initial account (which survives only in post-Reformation copies). This second version of the text represents Julian’s transition from mystic to sophisticated theologian. It is an elegant piece of rhetorical writing, in lyrical prose, which contains some unforgettable imagery. Given the privation of her life — a life of permanent enclosure — Julian’s work is strikingly, almost radically, hopeful. 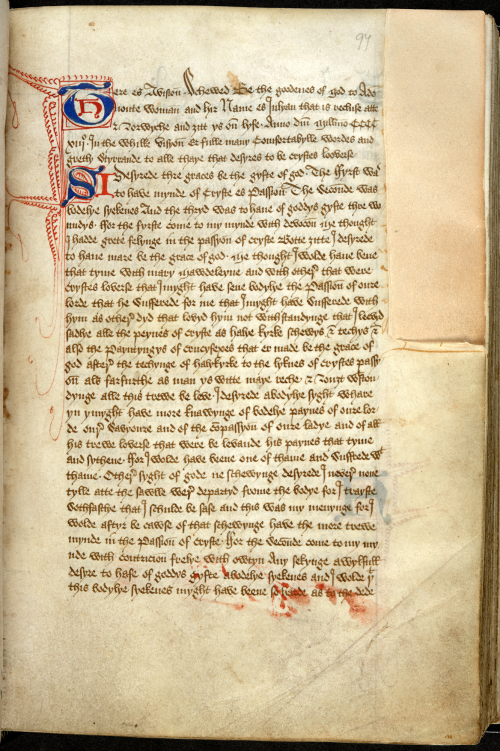 Julian never makes reference to the realities of her way of life. At one point she writes that ‘this place is pryson, and this lyfe is pennannce’, but she was likely referring to her life on Earth, rather than the confines of her cell. Her work is instead suffused with optimism. Julian’s most famous line, 'all shall be well and all shall be well and all manner of things shall be well', delivers a hopeful message of love as the guiding force of the universe. 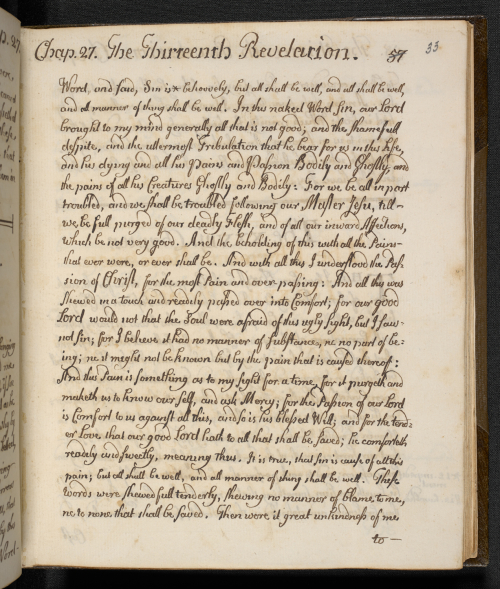 In this time of isolation, the lives of medieval hermits may seem stranger to us, as we realise the true toll that isolation takes. But this strangeness perhaps also gives us a new appreciation of these figures, battling demons in mountain caves or fenland barrows or ‘islanded’ in small, dark cells. Julian’s hope in the darkness is a message that speaks to us across the centuries.