In search of the books of Richard Amadas

Many of the medieval manuscripts that survive today passed through the hands of early modern book collectors. One of these was Richard Amadas, vicar of the small village and civil parish of Great Hallingbury, Essex, in the late 16th and early 17th century. Much of what we know about him (which is indeed very little) comes from the testament that he made and signed in 1626. From it, we learn that Amadas's will was proved in 1629, which suggests that he died in that year. We also learn that he bequeathed ‘all my bookes that I have’ to his wife, Mary. 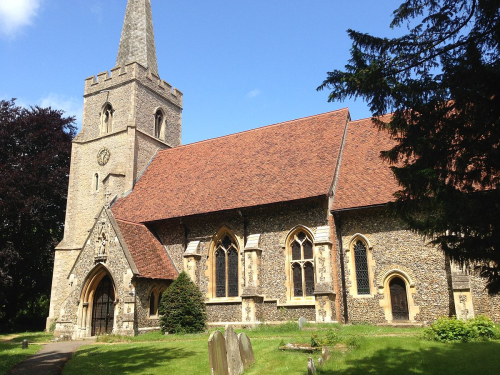 Not long after Amadas’s death his books were dispersed. Only a small number of these have been identified in modern times; in our cataloguing work at the British Library, we have now discovered three medieval manuscripts from his collection. They survive in two of our foundation collections, formed respectively by Sir Robert Bruce Cotton (1574–1631), and by the Lord High Treasurer Robert Harley (1661–1724), first earl of Oxford and Mortimer, and his son Edward Harley (1689–1741). Here we explore what can be gleaned from these manuscripts about Amadas’s interests as an early modern book collector.

In the early 1980s, the librarian J. C. T. Oates identified a number of Amadas’s medieval manuscripts and printed books at Cambridge University Library. Among these is the so-called ‘Cambridge Juvencus Manuscript’ (Cambridge, University Library, Ff.4.42), containing a 9th-century copy of the Evangeliorum libri IV (The Four Books of the Gospels) by the 4th-century poet Juvencus, with the earliest surviving poems in Old Welsh entered in the margins. The manuscript has been annotated in a script that is identical to that found in Amadas’s testament. If this is Amadas's own handwriting, it suggests that he closely studied Juvencus’s verse rendering of the Gospel narrative. The 'Cambridge Juvencus Manuscript' contains annotations attributed to Richard Amadas, including the name 'Mr. Price' on f. 1v: the whole manuscript can be viewed online

Each of the three newly-identified manuscripts from Amadas’s collection bears his signature on its opening page. But his signature is difficult to read, with Oates describing it as ‘an almost illegible tangle of narrow sloping loops’. 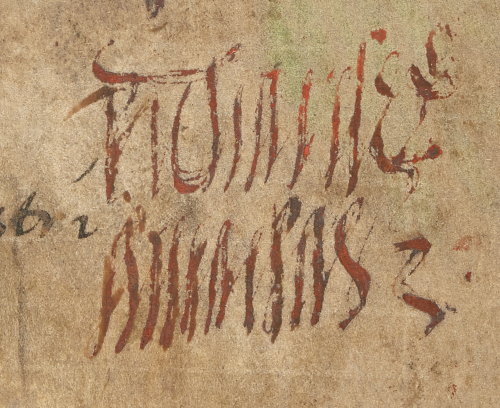 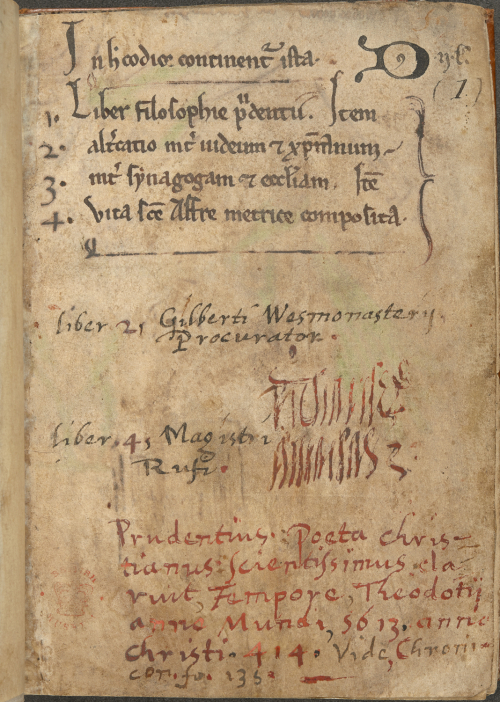 The signature of Richard Amadas (‘Richarde Amadas’) in Cotton MS Titus D XVI, f. 1r, followed by the full page in which it is found

One of Amadas’s manuscripts is Cotton MS Titus D XVI. It contains an early 12th-century copy of the Psychomachia (Battle of the Soul) by the early 5th-century Roman poet Prudentius, an allegorical work in which personifications of the seven vices and virtues combat each other. Colin Tite, who dedicated much of his career to studying the Cotton collection, managed to decipher Amadas’s signature but did not identify him with the book-collecting vicar of Great Hallingbury.

Cotton MS Titus D XVI provides interesting clues about how Amadas used his books. Writing in bright red ink and in a distinct squarish script with an unusually large letter ‘v’, he frequently added annotations to the Psychomachia. The annotations usually contain expansions of Latin abbreviations or synonyms for words in Prudentius’s work. For example, in a section that describes how Pride attacks Humility, Amadas has underlined the word ‘umbonis’ (boss of a shield) and added the word ‘bucklar’ (from the Old French bucler or Latin buccularius, a shield with a boss) in the page’s outer margin. 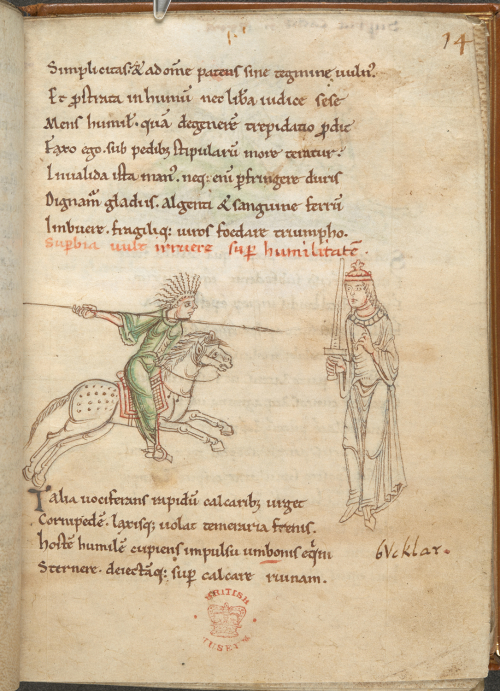 Amadas also owned Cotton MS Vespasian D XI. This 12th-century manuscript contains the Hypognosticon — a salvation history from the Creation until the present time — by the poet Lawrence of Durham (c. 1110–1154), prior of Durham Cathedral Priory. The manuscript’s opening page features two signatures that previously had not been deciphered. However, a comparison with the signature that Colin Tite deciphered from Cotton MS Titus D XVI provides us with a match, leaving no doubt that this is another of Amadas’s manuscripts. 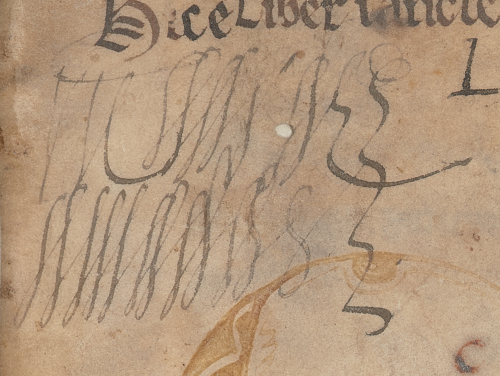 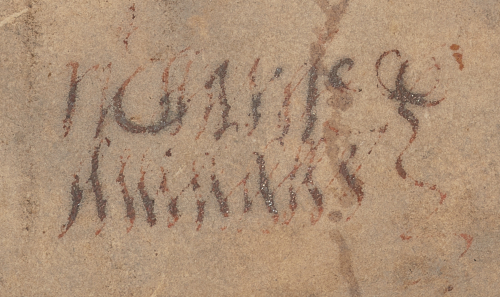 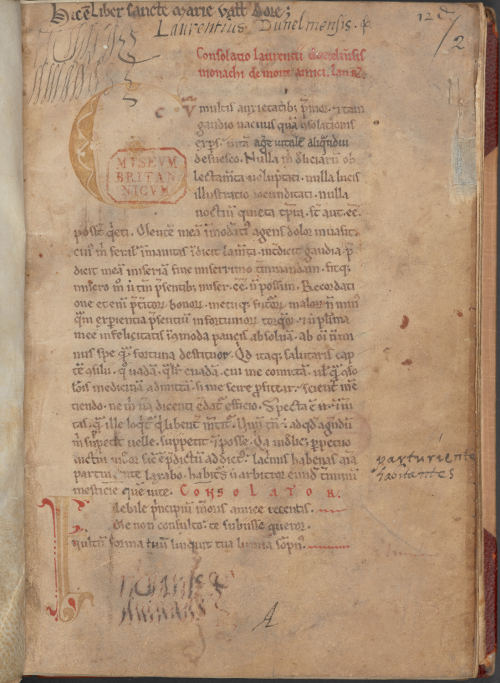 Two signatures of Richard Amadas are found on the opening page of Lawrence of Durham's poems, one in the lower margin and the other in the upper left corner (Dore Abbey, 2nd half of the 12th century): Cotton MS Vespasian D XI, f. 2r

Cotton MS Vespasian D XI also contains annotations that suggest that Amadas closely studied its contents. Aside from expanding Latin abbreviations, he may also have been responsible for adding punctuation marks and corrections to the poems. For example, in a section which was highlighted as a ‘poem of the planets’ (planetarum versus), he may also have corrected the word ‘myras’ (wonderful) with ‘vias’ (ways). 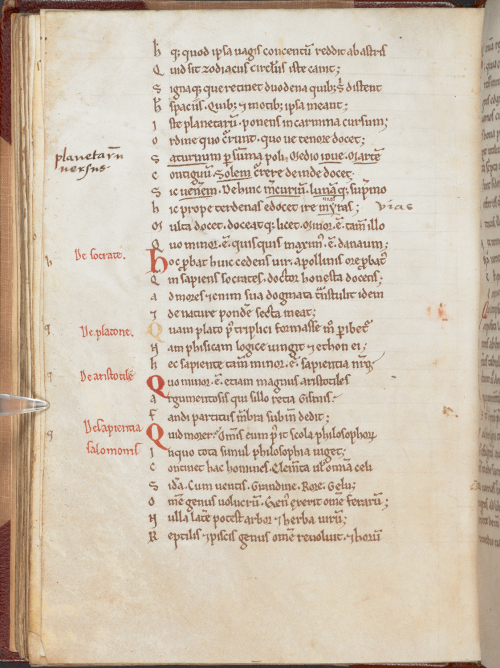 A third manuscript with Amadas’s signature (Harley MS 399) was recently discovered in our ongoing cataloguing project on the Harley collection. It contains a 15th-century copy of the Secretum Secretorum, a treatise that purports to be a letter from the Greek philosopher Aristotle to his pupil Alexander the Great, covering a wide range of subjects such as alchemy, astrology, ethics, magic, medicine and politics.

Amadas did not annotate the Secretum Secretorum, perhaps because there was little scholarly interest in this work during his lifetime. Although it was well known during the later Middle Ages, it lost its popularity during the 16th century when it became widely recognized that there was no evidence for Aristotle’s claimed authorship.

Richard Amadas was clearly a student of Latin language and literature. By clarifying and correcting the grammar of the Latin poems in his manuscripts, he followed a tradition of humanist scholars who sought to create accurate editions of Classical Latin texts. Today he is virtually unknown as a book collector, but through these new identifications we can gain a better understanding of the small but important collection of medieval manuscripts that he studied and preserved for posterity.

You can read more about Amadas and the Cambridge Juvencus in J. C. T. Oates, ‘Notes on the Later History of the Oldest Manuscript of Welsh Poetry: The Cambridge Juvencus’, Cambridge Medieval Celtic Studies, 3 (1982), 81-87. This manuscript can be viewed on the Cambridge Digital Library, and there is also a facsimile and commentary by Helen McKee published for CMCS Publications (2000). Colin Tite deciphered the signature in Cotton MS Titus D XVI in his The Early Records of Sir Robert Cotton's Library: Formation, Cataloguing, Use (London: The British Library, 2003), p. 199.