On the 21st of May 1390, during a three-year truce in the Hundred Years’ War, the French knights, Boucicaut, de Roye and Saint Pi, set up three luxurious crimson tents in a spacious field between Calais and the Abbey of Saint-Inglevert. They issued a challenge to all comers for a friendly trial of arms lasting 30 days. Many English knights attended, one being Sir John Holland, Earl of Huntingdon, who was highly applauded for his contests against Boucicaut and de Roye. Afterwards, Huntingdon asked to be allowed one more challenge for the love of his lady, but this was not permitted by the rules. Over four days of tilting, more than 40 challenges were issued, each one described in detail by the writer Jean Froissart in his Chronicles. 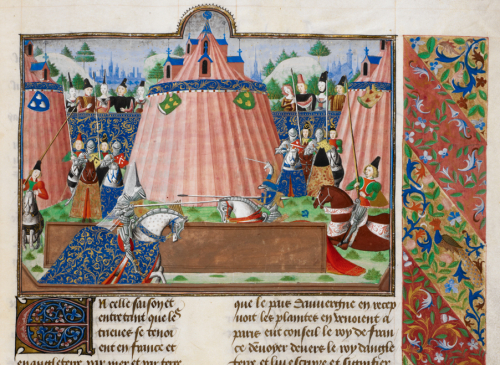 The tournament of Saint-Inglevert, in the Harley Froissart, Harley MS 4379, f. 43r

Chivalric tournaments were a regular form of aristocratic entertainment from the 12th century onwards, often accompanying great occasions such as coronations or marriages. These simulated battles were well-planned and choreographed events where a knight could show off his skills. They also served as a training ground for real warfare.

The warmer months were the popular season for tournaments, as shown by this image of the activity for the month of June from a 16th-century Book of Hours known as the Golf Book. Calendars in these books often contain miniatures of the labours of the months, cycles of largely agricultural activities such as reaping and ploughing that were carried out throughout the year, but here sports and games supplement these traditional scenes. The miniature shows knights jousting and sword-fighting on horseback in a crowded arena. Below the picture is a border scene of figures riding on wooden hobby horses and holding toy windmills, perhaps intended as a parody of the tournament above. 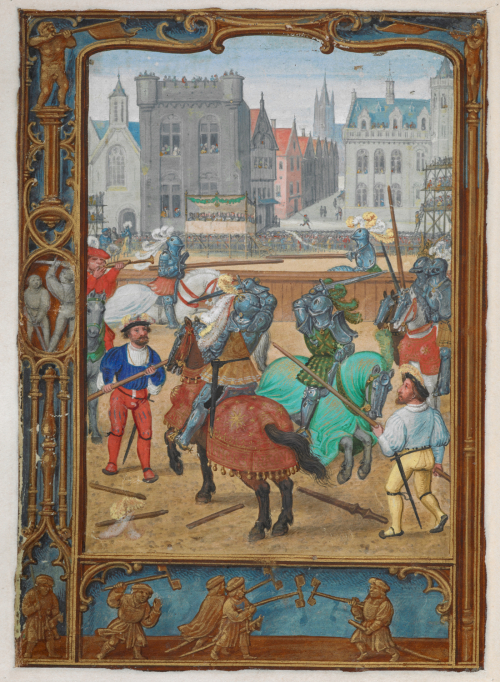 A winter tournament was held to celebrate the coronation of Joan of Navarre, wife of Henry IV of France in February 1403, in which Sir Richard Beauchamp, Earl of Warwick, fought as her champion. This drawing from his illustrated biography, the recently digitised Pageants of Richard Beauchamp, shows him wearing a helmet with the Warwick emblem, a bear with ragged staff, while the queen points to him from the balcony. 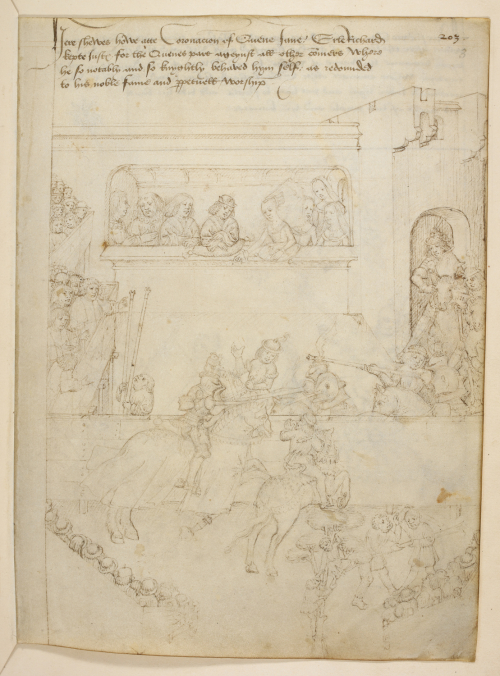 The medieval travel narrative The Travels of Sir John Mandeville describes a tournament in Constantinople, watched by the Byzantine emperor. The event is depicted in this elaborate scene based on a Czech translation of the Travels, illustrated in Bohemia in the early 15th century. 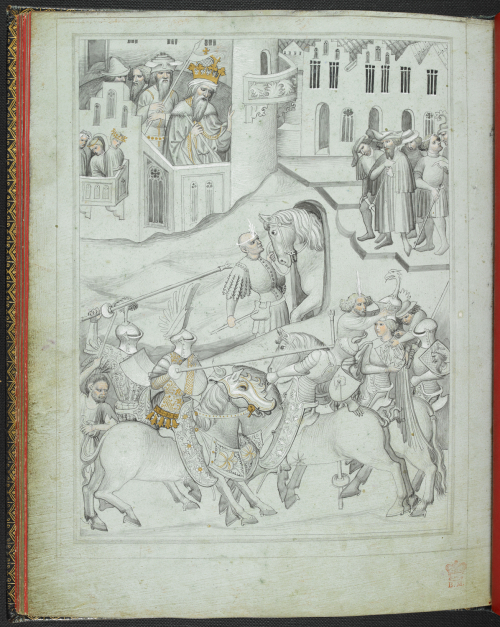 A tournament in Constantinople with jousting, in the Travels of Sir John Mandeville, Add MS 24189, f. 15v

Some of the most fabulous images of martial display are from manuscripts of courtly romance literature, which provided inspiration for the real events, with medieval knights doing their best to emulate Arthurian super-heroes like Sir Lancelot. This scene is from the romance of Méliadus about the chivalric deeds of Tristan’s father. In one episode, Méliadus falls in love with the queen of Scotland when he sees her passing in a magnificent procession on her way to a tournament. He takes part, defeating numerous challengers and winning the queen’s admiration. He is usually portrayed bearing the Neapolitan arms in this manuscript, which was copied and decorated for the king of Naples, Louis de Tarente, who founded the first Italian order of knighthood, the Nodo (knot). 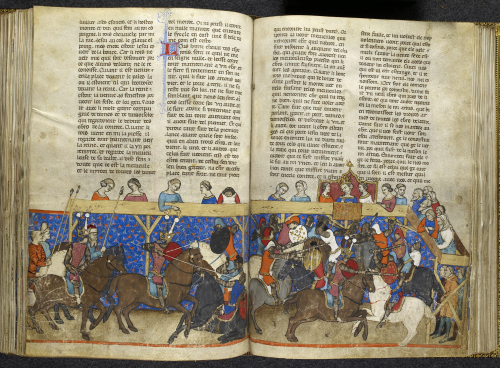 Medieval tournaments usually consisted of a melée, or mock combat between two teams, preceded by jousting between individuals, as depicted in this miniature from the French romance of Ponthus et Sidoine. To cut a long story short, Ponthus is heir to the kingdom of Galicia and one of Hoel’s knights. He falls secretly in love with Sidoine, who is promised in marriage to the Duke of Burgundy, and he has to flee to Britain to escape her father’s wrath. Returning to Brittany on his way to win back his kingdom, he finds that Sidoine’s wedding to the duke is about to be celebrated with a tournament. Disguised as a white knight, he kills the Duke in a joust, winning Sidoine’s hand. He regains his kingdom and the pair rule as joint monarchs of Galicia and Brittany. This plot is almost identical to the English romance of King Horn, though most names have been changed. Somewhere between medieval legend and recorded history is a work known as Le Petit Jean de Saintré. It claims to be a chivalric biography, and there was indeed a knight by this name who lived about a hundred years before it was written, but the author pays little attention to historical facts. The young Jean is educated in the values of knighthood by the Dame des Belles-Cousines, who instructs him on a variety of subjects from the seven deadly sins to personal grooming. He travels around the courts of Europe, winning fame at many tournaments, but in a surprising plot twist at the end, the virtuous Dame falls prey to a lusty monk, much to the dismay of her earnest young champion. 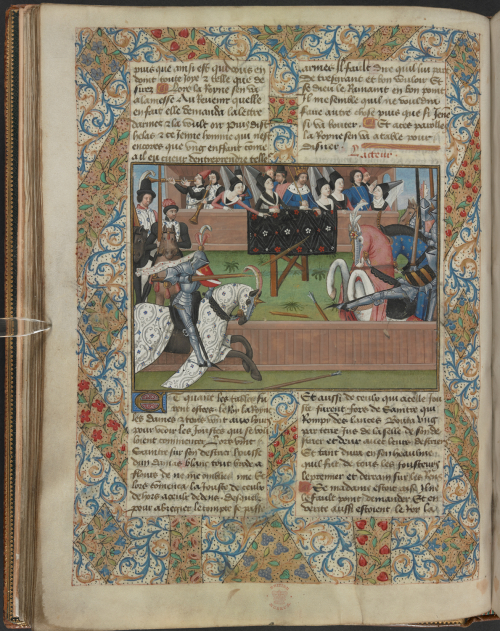 But not everyone took tournaments so seriously. In this manuscript border, two men in wicker armour tilt at each other while riding on sheep, and one falls clumsily to the ground. Looks like quite the baa-lancing act!

Men jousting on sheep in an illuminated border from a book of Gospels, Royal MS 1 E V, f. 171r

Posted by Ancient, Medieval, and Early Modern Manuscripts at 12:06 AM