Made to take pride of place on the abbey's high altar, the St Albans Benefactors' Book reads like a who's who of medieval England. It preserves hundreds of names, details and portraits of people who made gifts to the Abbey of St Albans throughout the Middle Ages. Far more than a list of donors, it presents a vivid picture of a community and all the individuals who comprised it. Its pages bustle with the life and colour of medieval society. 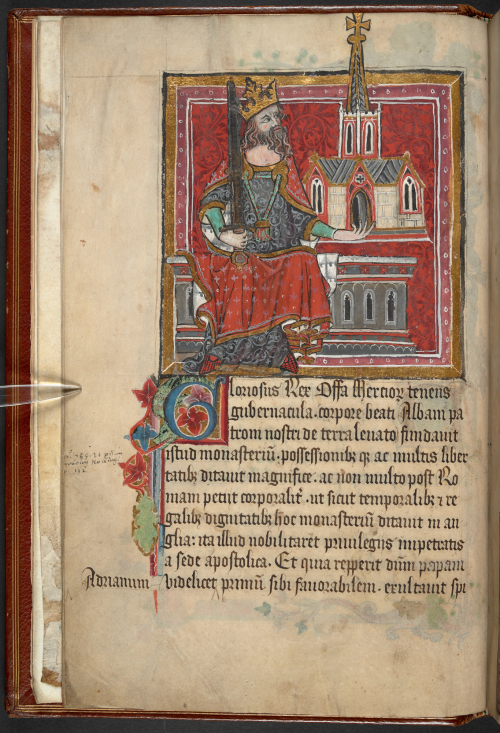 The Benefactors' Book (Cotton MS Nero D VII) was begun around 1380 as a register of members of the Abbey's confraternity, established by Abbot Thomas de la Mare (r. 1350–96). According to the preface, anyone who made a donation could be admitted into the confraternity, which granted them a lavish induction ceremony, spiritual benefits and a record in this prestigious book.

As well as recording contemporary donors, the entries stretch far back into the Abbey's past, beginning with King Offa of Mercia who is said to have founded the Abbey in 793 (pictured above). Spaces were also left for future entries, and the abbey continued to add the details of new benefactors into the 16th century. 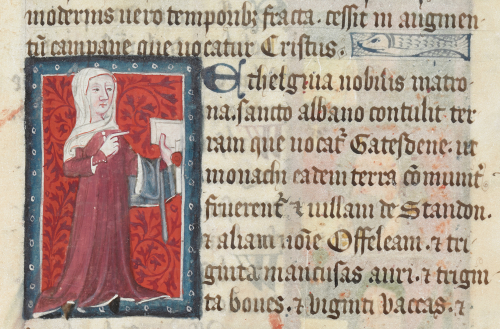 The job of compiling the register from the Abbey's old documents was given to Thomas Walsingham (d. c. 1422), the precentor of the Abbey and a prominent historian. The scribe was a monk of the Abbey named William de Wyllum, and the illuminator was a professional lay artist named Alan Strayler who waived the cost of the pigments in return for his place among the Abbey's benefactors (f. 108r). 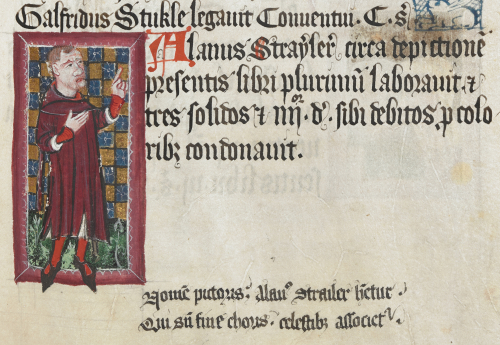 The book presents an orderly view of medieval society. The benefactors are organised according to social hierarchy: kings and queens first, followed by popes, abbots, priors and monks of St Albans, bishops and finally laypeople. All levels of society who could afford to donate are included, from members of the royal family and knightly aristocracy, to London burghers, fishmongers, millers and masons.

Strayler's lively portraits are full of individuality. People assume different postures, facial features, expressions and gestures. They wear detailed costumes appropriate to their social rank and many of them are shown proudly clutching the prized objects that they donated to the Abbey. Although it is unclear how closely they reflect the actual appearances of the people they represent, the portraits give a vivid impression of assorted personalities and walks of life. 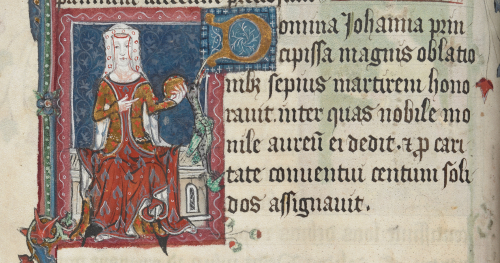 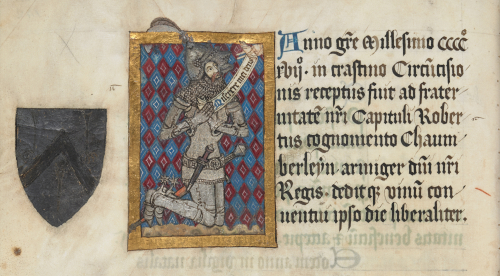 Where details of a person's appearance were known, it seems that Strayler took care to include them. For example, abbot of St Albans Richard of Wallingford (d. 1336), a gifted astronomer who created an extraordinary astronomical clock for the Abbey, is depicted with a blemished face, reflecting the fact that he was said to have suffered from leprosy. 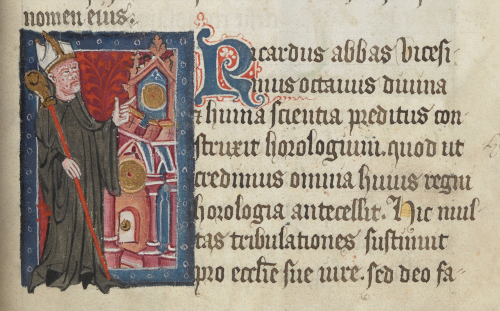 Similarly, a man named Æthelwine the Black (Egelwynnus ye Swarte) who, together with his wife Wynflæd, gave land to the abbey in the time of King Edward the Confessor (r. 1042–1066), is depicted with dark skin.

Just as fascinating as the benefactors are their gifts, which richly evoke the splendour of medieval material culture. Besides land, property and money, people gave treasures such as jewellery, vestments, chalices, bowls, horns, bells, statues, precious stones and books.

Petronilla de Benstede who gave a round super-altar of jasper set in silver on which St Augustine of Canterbury was said to have celebrated: Cotton MS Nero D VII, f. 101v

The entries are suffused with hints of stories that leave you longing to know more. For example, in the section on abbots of St Albans, we learn of Abbot Ealdred who filled in the cave of a dragon, and the unfortunate Abbot John Berkamsted who 'did nothing memorable in his life' (nichil memorabile fecit in vita). 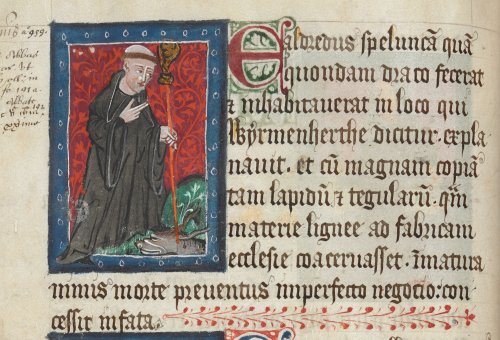 Ealdred, abbot of St Albans in the 11th century, who filled in the cave of a dragon: Cotton MS Nero D VII, f. 12v 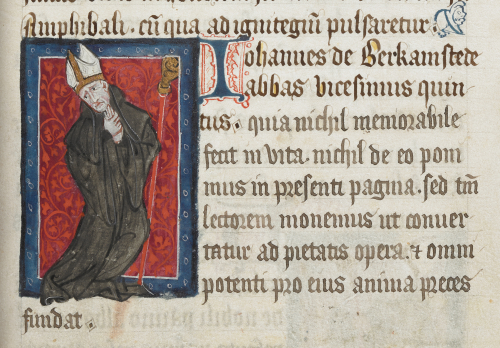 Unlike the chronicles that Thomas Walsingham would go on to write, this is a history not of momentous events but of the colourful characters, precious gifts and shared stories that were the fabric of the Abbey's community for centuries.

Now you can immerse yourself in this captivating book too: the manuscript is newly digitised and available to view on our Digitised Manuscripts site.