A load of rubbish

We think we can write on anything: notebooks, phones, touchscreens, walls, blackboards or occasionally even our own hand. But using rubbish from the bin probably sounds a bit much.

In the classical and late antique world this was different. In times when purchasing a sheet of papyrus or parchment was a considerable investment, people had to make alternative arrangements. This is how rubbish started to be recycled for writing. 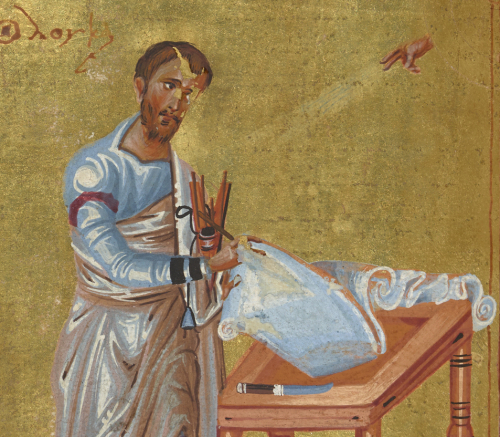 Ancient rubbish heaps were especially rich in broken pottery dishes. Vases, cups, jars and all kinds of home pottery utensils were widely used and broken all over the ancient Mediterranean. From the early 5th century BC, their sherds were already reused for writing.

In ancient Athens, fragments of painted pottery vases were used to record names of individuals whom the Athenians wanted to send into exile. Names of the unwanted were scratched on pieces of pottery – called ostraca in Greek. Those whose names featured on the most ostraca were then exiled – 'ostracised' – for 10 years from the city. 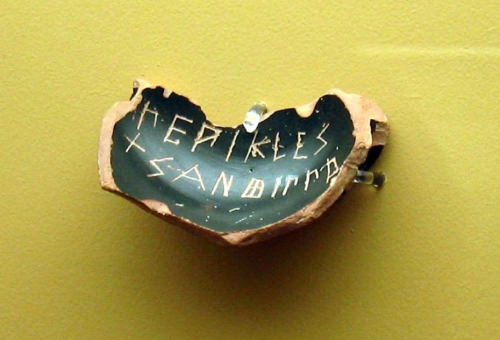 Piece of a dark pottery dish inscribed with the name of Pericles (“Pericles son of Xanthippus”) submitted as a vote to exile him from Athens. Mid-5th century BC, Athens. Athens, Agora Museum P 16755

Over the next centuries as reuse of pottery waste spread across the Mediterranean, the function of ostraca changed. In Egypt, the shape and material of pottery were different. In contrast to the slim Greek dishes, painted shiny and dark, in which inscriptions had to be incised, Egyptian pottery was light or reddish colour with a grainy surface, which could easily be inscribed with just pen and ink.

The benefits of this cheap and accessible writing surface were soon recognised. From the 4th century BC, an ever-growing number of documents in both Greek and Egyptian were recorded on pieces of this reused rubbish, mainly by the fiscal administration of Egypt.

One of the earliest Greek ostraca in the British Library shows this new use of pottery waste by the local authorities. It preserves an ancient fishing permit issued to a certain Pamyt, who duly paid two drachmas for it in 255 BC. This piece from a light-coloured Egyptian dish foreshadows the basic function of ostraca for the next almost 1000 years: to record receipts of tax or other payments. These were short and ephemeral documents, which were needed only for a limited period of time. 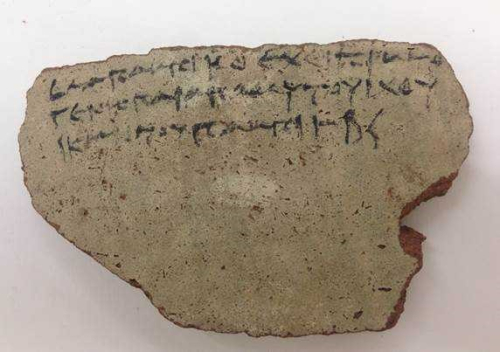 Fragment of a light-coloured dish preserving a receipt for fishing tax, issued by the tax collector Protogenes to Pamyt. Thebes (Egypt), 255 BC, Ostracon 12634

Another much later fragment shows that these receipts on ostraca can be much more revealing than one may probably think. This piece of a reddish pottery vase, for example, was reused to record payment for a very specific tax. 1910 years ago, it was issued to a sex-worker called Thinabdella as a proof that she had paid for her work permit 'to have sex with whomever she wishes in the city of Elephantine on the day indicated below'. 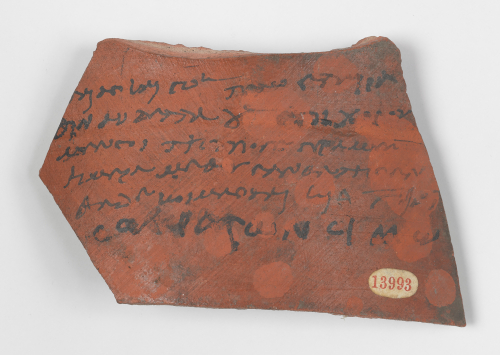 Following the official example set by the authorities, the practice of writing on rubbish spread to private households too. This ostracon, which was probably the bottom of an ancient pottery cup, was reused by someone as a memo to record an important date in 369 AD. 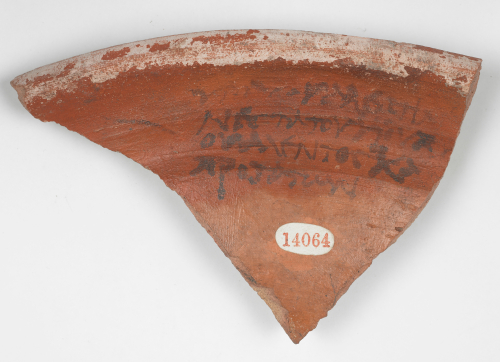 The use of recycled household rubbish for writing even extended to food waste, mainly animal bones. This leftover of a meal from about 1800 years ago bears a list of individuals' names and addresses, probably for taxation reasons. Whether these bones were used and archived in a similar way to the pottery fragments is not certain but it is hard to imagine using these as evidence of payment. It is more likely that they served as drafts for the final version of a document.

This use of recycled rubbish for making first drafts or sketches is reflected in a rare example of an illustrated ostracon. This piece of a brownish vase was reused to practise drawing an ornamented endpiece for a manuscript on papyrus or parchment. The text in the centre of a decorative panel, announcing 'here is the end' (ⲧⲉⲗⲟⲥ ⲉⲭⲉⲓ), sounds very similar to closing formulae of manuscript books. See this article on the Greek Manuscripts webspace to discover what ancient books looked like. 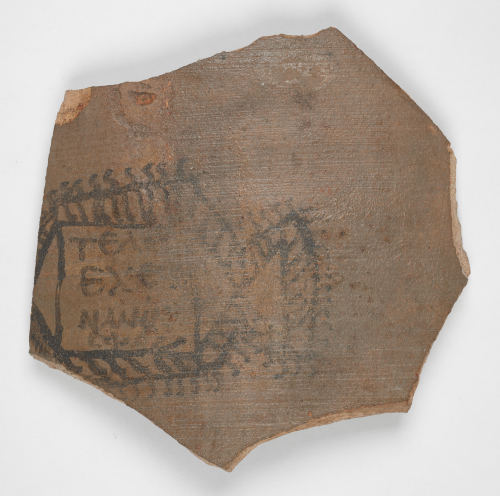 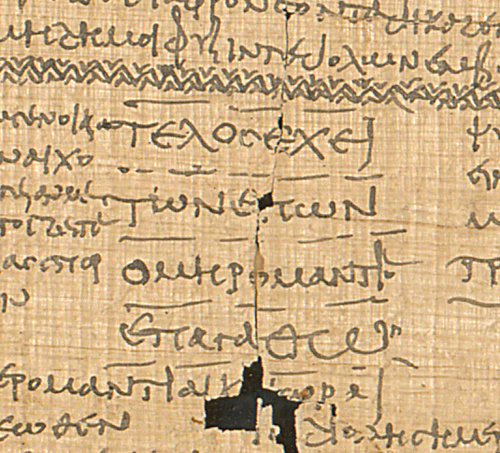 It was not only professional scribes who used their rubbish to record drafts. The main market for reused pottery fragments came from schools. Due to their free and almost limitlessly wide availability, ostraca were extremely popular in school education. For more about documents from ancient schools, see this article on children in Ancient Egypt.

Another red-coloured fragment, possibly from an amphora, was first reused to record some names by a more proficient writer, who left the lower part blank. This empty space was later reused again, this time by a child who wrote his name, Paniskos, there. The child also jotted some shaky letters on the back accompanied by his drawing of a human head – maybe of his teacher? 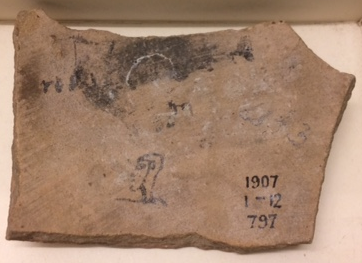 Back of a red pottery sherd reused by a schoolboy, Paniskos, to practice writing. The first line preserves some shaky Greek capital letters and the bottom a doodle of human head by the bored child. Egypt, 4th century, Ostracon 44187

The British Library preserves more than 4000 fragments from ancient vases, cups, jars or bones, bearing various Greek texts from the 3rd century BC to the 7th century AD. This remarkable trove shows us the economical and sustainable mindset of the ancient world which reused as much rubbish as possible. The reused rubbish is now treasure, providing special glimpses into everyday life that remained rare for many centuries after.