Coinciding with the feast of the Nativity of St John the Baptist (24 June), midsummer was a time for celebrations both religious and secular in medieval society. These included church-going, holding pageants, lighting bonfires, singing, dancing, gathering flowers and feasting.

A taste of these medieval festivities survives in a recipe for chyryse, or cherry pudding, found in several medieval culinary collections. Some versions of the recipe specify that the cherries are to be picked on the feast of St John the Baptist, when they are at their best. The cherry harvest was closely associated with the festivities of midsummer and in medieval literature, the expression 'cherry time' was often used to signify short-lived good times. A boy stealing cherries from a tree, with an angry club-wielding man coming to punish him, the Luttrell Psalter, Add MS 42130, f. 196v

For midsummer this year, I am experimenting with recreating chyryse from the British Library's copy of the Forme of Cury (Add MS 5016, m. 5), a recipe book composed by Richard II’s chief cook around 1390. Medieval recipe books are not quite as user-friendly as modern ones, often providing no quantities, obscure ingredients and bafflingly vague instructions. This, however, is all part of the fun.

Recipe for chyryse from the Forme of Cury, Add MS 5016, membrane 5

Take unblanched almonds, wash them, grind them, draw them up with good broth. Add a third part of cherries, take out the stones, and grind them small. Make a layour (thick sauce) of good bread and powder (spice mix) and salt and add. Colour it with sandalwood so that it is standing (thickened) and flourish it with aniseed and with cherries and strew on top and serve it forth.

To make this recipe, I mixed together 100g ground almonds and 150ml red wine (the recipe calls for 'gode broth', i.e. animal stock, but some alternative versions use wine instead, which seems like a better option). I heated them gently in a pan. After removing the stones, I roughly pureed a large punnet of cherries with a hand blender and added them to the pan. I grated a slice of wholemeal bread to make breadcrumbs, which I added to the mixture along with a spice mix of ginger, cinnamon, cloves, sugar and salt (the recipe does not specify which spices, but this is an authentic medieval blend). Not having any sandalwood to dye it, I left out that step. I gently simmered the mixture for about 20 minutes until it thickened, then refrigerated it overnight. I served it with a garnish of aniseed and halved fresh cherries. 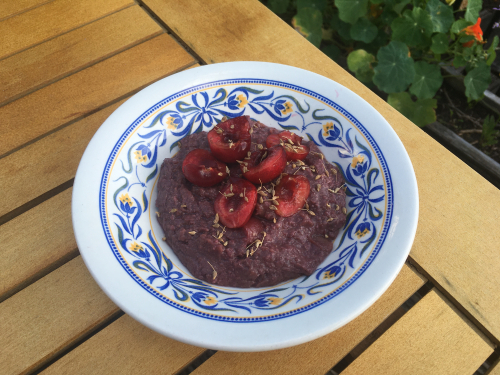 My modern recreation of chyryse, photo by the author

Chyryse is like nothing I've eaten before, but I really like it. The mixture itself is not very attractive, although the garnish certainly helps. Its grainy texture is unlike most modern puddings, with semolina probably being the closest comparison. The strong fruity cherry flavour is warmed by the earthy spices. The aniseed is an especial winner, its liquorice kick perfectly complementing the mellow sweetness of the cherries. Once I'd got over its initial strangeness, I found chyryse to be a bewitching midsummer delight. 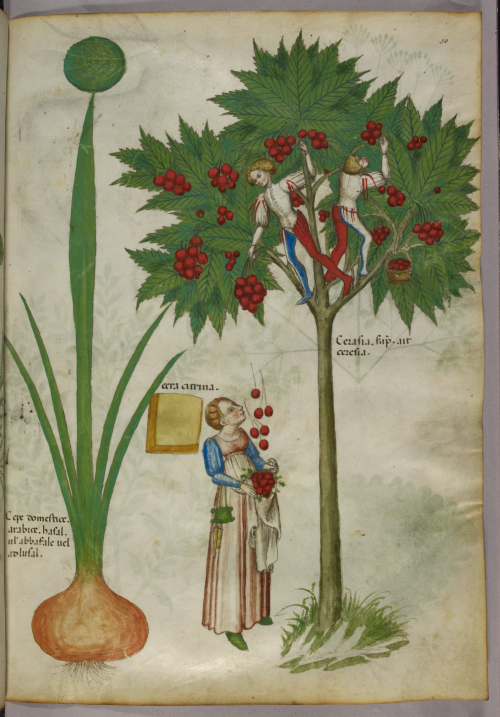 The cherry harvest, with boys standing in the branches of the tree and throwing cherries down to a woman below, Sloane MS 4016, f. 30r

***disclaimer: this recipe was made in my own time and at my own expense. No Library resources were used in the making of this chyryse! ***