Did Henry VIII believe in unicorns?

Did King Henry VIII believe in unicorns? That is perhaps the conclusion to be drawn from a manuscript that reveals intimate details of the final years of Henry's life (1481–1547). We also learn from the same manuscript that he was partial to dragon's blood, and that he prescribed a cure for his fourth wife's ‘colde and wyndie causses’.

Henry suffered from poor health in his later years. In 1536, in a jousting accident at Greenwich Palace, his legs were crushed under a fully-armoured horse, as a result of which he developed chronic ulcers. These were lanced by his physicians with red-hot pokers, but our manuscript shows that they also used more subtle methods and applied medicines made from natural ingredients. Made in the 1540s, Sloane MS 1047 contains a series of elaborate medical recipes, some of which were devised by Henry himself. It is interesting to observe in this particular manuscript the king's own endeavours as an amateur medical practitioner. 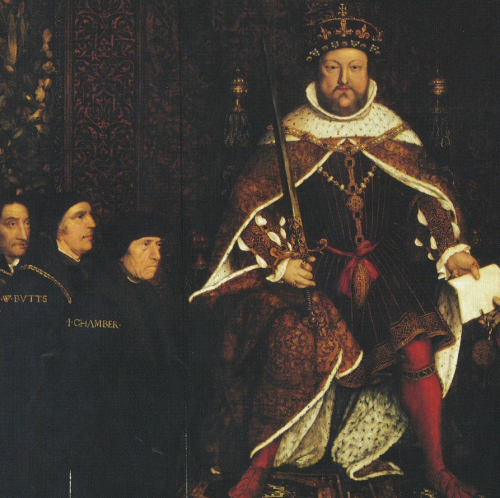 Detail of King Henry VIII and the Barber Surgeons, by Hans Holbein the Younger, c. 1543 (The Worshipful Company of Barbers)

Many of the treatments in this collection are attributed to his four principal royal physicians: Walter Cromer (d. c. 1547); the Venetian Augustin de Angustinius (fl. 1520s–1540s); William Butts (c. 1486–1545); and John Chambre (1470–1549). The latter two are famously depicted next to the king on Hans Holbein the Younger’s painting Henry VIII and the Barber Surgeons. Henry’s physicians worked separately or collaboratively to create many of the more than 100 plasters, spasmadraps (dipped plasters), ointments, balms, waters, lotions, decoctions and cataplasms (poultices) that make up the contents of Sloane MS 1047. An account book for the years 1543–1544 indicates that they were rewarded well for their services.

Remarkably, more than thirty of the treatments are attributed to Henry himself. His recipes identify several of his royal palaces, including Fotheringhay Castle, Greenwich Palace and Hampton Court, as well as Cawood Castle in North Yorkshire, as the locations where he wrote and tested his recipes, suggesting that he took his apothecary equipment on his travels. A typical introduction to his recipes reads as follows:

‘An Oyntement devised by the Kinges Maiestie made at Westminster and devised at Grenewich to take awaye Inflammations, and to cease payne, and heale ulcers, called the gray plaster’ 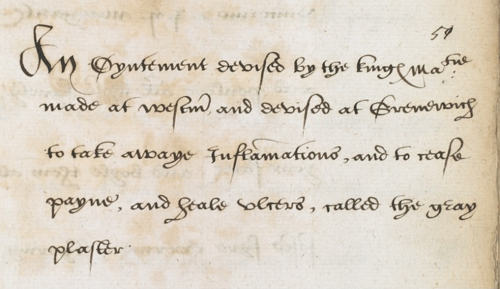 Henry’s treatments use numerous plant-based ingredients: fruits and flowers for making pulp of apples (‘pulpe of appulls’), water of strawberries (‘water of Strawe beries’), wine of pomegranates (‘wyne of pomegranate’), oil of lilies (‘oyle of lyllies’), powder of red damask rose leaves (‘pouldre of redde damaske rose leaves’), and water of honeysuckle flowers (‘water of honye suckle flowres’); a wide range of plant leaves with sedative properties, such as henbane (‘henbayne’), mandragora (‘mandrake’), black poppy (‘blacke poppie’), and the poisonous nightshade; wood of guaiacum that was imported from the ‘New World’ (tropical America) and referred to as ‘wood of life’ (lignum vitae) for its purported healing properties, and the red resin of the dragon blood tree that was known as dragon’s blood (sanguis draconis). 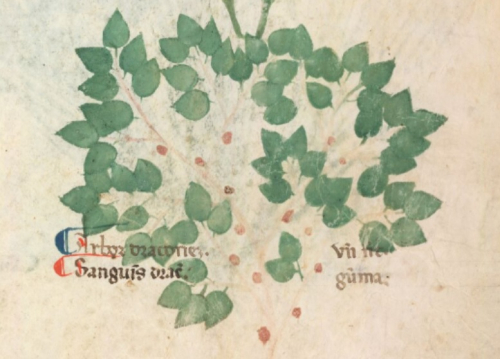 Henry and his physicians also made ample use of medicinal waters, metals, minerals and stones. Their recipes included aqua mirabilis (‘miracle water’), a water mixed with spirit-infused spices; ceruse, a mixture of white lead and vinegar that was a popular cosmetic skin whitener in 16th-century England; Armenian bole, a medicinal red clay from Armenia; terra sigillata, sealed cakes of mineral-rich earth associated with the Greek isle of Lemnos; and lapis lazuli, a blue stone that was highly sought after by illuminators and painters for making the pigment ultramarine, but that was also used for medicinal purposes and already recommended by the Greek physician Dioscorides (c. 49–90) for treating ulcers. 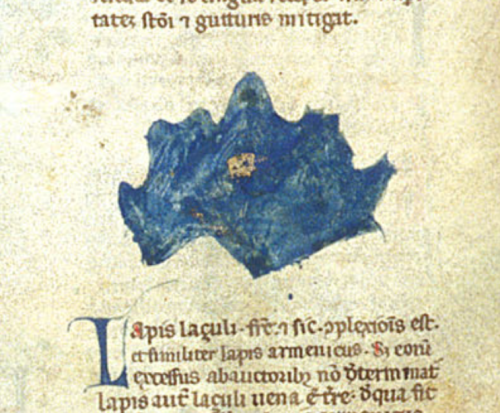 Unicorn horn may be the most surprising ingredient in Henry’s treatments. The legendary animal’s single horn was ascribed great cleansing and healing powers in the late Middle Ages. The demand for it created a trade in which narwhal tusk and walrus ivory were sold off as unicorn horn. English kings and queens were regular buyers: Elizabeth I drank from a unicorn horn cup, and James I used a unicorn horn potion for his ailing son. No less than ten of Henry’s recipes require ‘cornu unicornu’ or ‘unicornis horne’. One of these is the ‘Plaster of Horns’.

Take 4 ounces of finely powdered litharge of gold [a mineral mixed with lead oxide], 2 ounces of ceruse, unicorn’s horn, hartshorn, oyster shell, red coral, and burn them all up. Take half a pint of oil of roses, and 2 ounces of white vinegar of roses. Put them all in a clean pan on a gentle fire, boiling them while constantly stirring, until it is like a plaster, and then prepare rolls out of them and keep them for your use.

Take lytherge of golde fynely pouldered iiij unces, ceruse ij unces, unicornes horne, hartes horne, oyster shelles, redd corall, all thiese combusted, and well preparated of eche of them one unce, take half a pynte of oyle of rosys, and ij unces of white vineacre of roses. Putt them all in a fair basyn over a softe fyre, boyling and styrring them styll, tyll yt be plaster wyse, and then make it upp in rolles and kepe it to your use’) 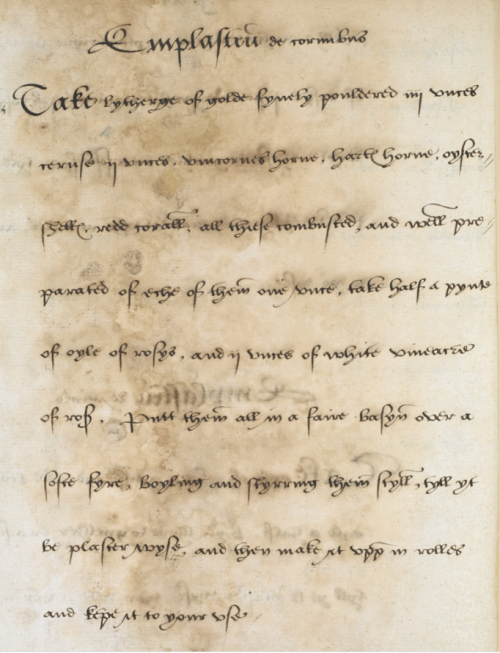 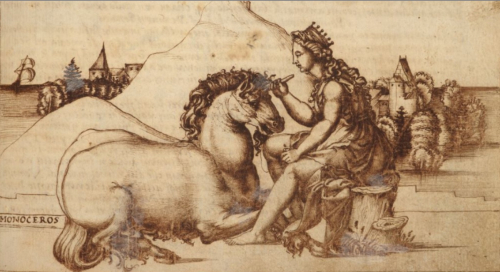 Henry also used his knowledge to provide medical advice to others. One recipe in Sloane MS 1047 is addressed to his fourth wife Anne of Cleves, queen consort from 6 January to 9 July 1540, and claims to ‘mollifie, and resolve, conforte and cease payne of colde and wyndie causses’.

We do not know how successful Henry’s treatments were, but sources suggest that his medical advice was much valued. Sloane MS 4 contains a recipe for ‘A Medycyn for the pestylence’ that is attributed to Henry (‘Kyng Henry the Eight’) and claims that it ‘hath helpyd dyvers persons’. Moreover, in a letter to Cardinal Wolsey, Sir Brian Tuke (d. 1545), Henry’s secretary, stated that the king gave him ‘remedies as any learned physician in England could do’ [‘remedyes as any connyng phisician in England coude do'].

In turning the pages of Sloane MS 1047, one can imagine Henry discussing new medical treatments with his royal physicians, learning from them and sharing his own experiences as both a practitioner and patient. Although Henry is often remembered for his tyranny, our manuscript reminds us that he was highly educated, greatly interested in medicine, and continued to learn and apply his knowledge until the end of his life.

You can now explore Henry VIII’s treatments — and spot all his unicorn recipes — on our Digitised Manuscripts site.