The later their date, the lower their quality. This is how some 19th-century scholars approached Greek manuscripts from after 1200. In the quest for the earliest exemplars, hundreds of late medieval and early modern manuscripts were ignored and marginalised as irrelevant late copies.

Despite the many warnings against this view, it was only in 1934 that an Italian scholar, Giorgio Pasquali (1882-1952), finally put it in writing that 'late manuscripts are not bad manuscripts'. They can be important for a number reasons: for the texts they preserve, for the way they present them or, frankly, just for themselves as books of their age. 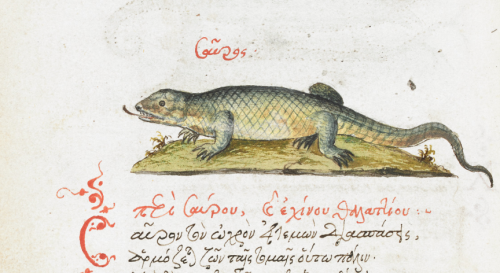 Thanks to generous funding we received from the Hellenic Foundation last year, we have been able to digitise seven 18th-century Greek manuscripts which amply demonstate why later manuscripts can be just as fascinating as ancient ones.

The most obvious reason why a later manuscript can be of key importance is if it preserves the only copy of an ancient text. One of the volumes digitised during the project (Add MS 78675) is an example of this. 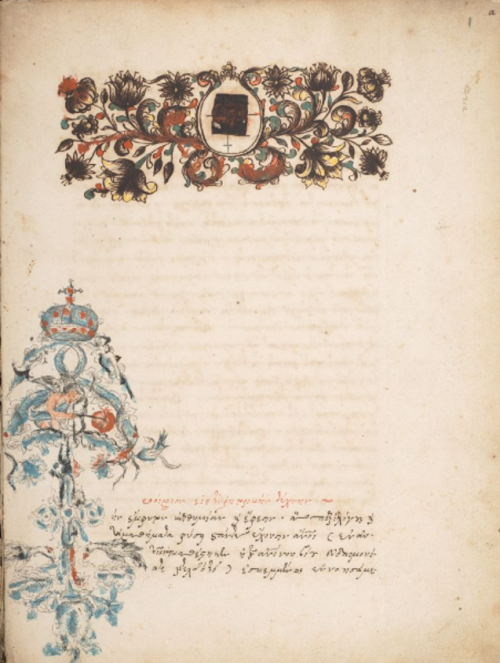 Written in nice 18th-century Greek cursive, the manuscript contains texts designed to help the reader to write in polished Greek language. The first text is a long unpublished manual of rhetoric in two parts. It consists of a general introduction to rhetoric, followed by a long treatise on how to tackle and refute arguments of opponents at court.

We have not been able to identify the author of this text but we found other copies of it in four manuscripts: two in Paris and two in the British Library (Add MS 39622, ff. 100-196r, and Add MS 18190, ff. 90-151v). Interestingly, the manuscripts are all from the 18th century but the text itself looks older. Analysing its wording and content, the closest parallels are all from 5th/6th-century rhetorical treatises. This suggests that it may be an ancient rhetorical tract which resurfaced in the 17th/18th century and was spread only in later Greek manuscripts. The text would certainly deserve a full study and edition, which the recently digitised manuscripts will surely facilitate.

Ancient and modern in one manuscript

Another reason why later manuscripts are exciting is that they show how texts from classical antiquity came down to us through the medieval and early modern eras. Another newly digitised Greek manuscript (Add MS 39619) presents this remarkably well.

Copied in 1712 somewhere in the region of Arta in north-western Greece, it was acquired by the English traveller Robert Curzon (1810-1873) and bequeathed to the Library by his heirs in 1917. See more about Greek manuscripts from Curzon’s collection.

The volume is a handy collection of texts instructing the reader on how to compose letters. It starts with a 4th-century collection of samples to convince, refute, denigrate or praise others. This text is followed by a similar but updated collection, which replaces the ancient samples with new ones taken from the Gospels (f. 37r) or Byzantine history (f. 44r).

Sample of a refutation using a Byzantine historical topic, 'that what historians write about the Emperor Leo the Wise is not likely to be true', from a collection of Greek rhetorical texts (Region of Arta, 1712), Add MS 39619, f. 44v (detail)

This long series of Byzantine sample texts is followed by some actual examples to show how the theory is to be put into practice. It is illustrated by a selection of letters from a contemporary ecclesiastic, Anastasius Gordius (1654-1720). Anastasius studied in Western Europe and spoke and wrote in Italian as well as in Latin. He lived as a monk in his village and served as a doctor, philanthropist and teacher of rhetoric, and was canonized as a saint in the 18th century. Interestingly, the manuscript was written in his lifetime and is a clear example of how ancient Greek rhetoric stayed alive, transmitted through classical texts and their Byzantine adaptations to be used by Early Modern Greek intellectuals.

Another recently digitised manuscript (Add MS 78674) shows why these late copies are interesting just for themselves. Copied in 1738 by an unknown scribe, the volume preserves a long commentary on Aristotle’s logical works written by one of the most important Byzantine philosophers of the early 17th century, Theophilus Corydalleus. The volume exhibits a mixture of Eastern and Western layout and decoration, just as the author himself conflated Western philosophical ideas, learned during his education at the best universities in Italy, with Byzantine theological heritage. 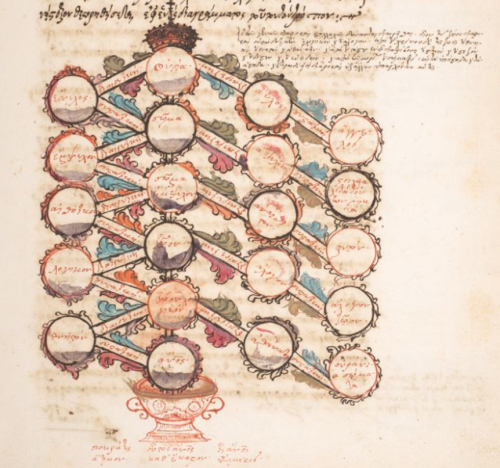 The coloured diagrams illustrating the philosophical reasoning seem to go back to earlier Byzantine or even ancient examples. The frequently recurring motif of a vase at the foot of some of these diagrams resembles the decoration of the 5th-century Codex Alexandrinus. 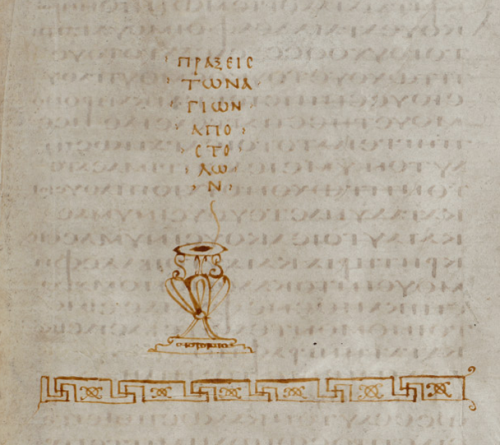 Tailpiece at the end of the Acts of the Apostles from one of the earliest complete Bible manuscripts, the Codex Alexandrinus (Eastern Mediterranean, 5th century), Royal MS 1 D VIII, f. 76r (detail)

Yet at the same time, the neatly designed table of contents, showing chapters with folio numbers at the end of the volume, looks like a modern Western print. 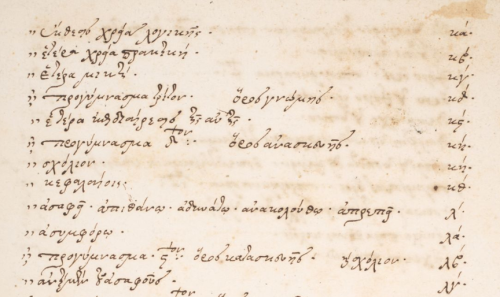 Table of content from the end of the Commentary of Theophilus Corydalleus on Aristotle’s logical works (Eastern Mediterranean, 1738), Add MS 78674, f. 270r (detail)

We are very grateful for the generous support of the Hellenic Foundation which helped us digitise and highlight these later Greek manuscripts. They provide ample illustration that late manuscripts ARE NOT bad manuscripts.