Layers of meaning in the Floreffe Bible

Throughout the Middle Ages, ecclesiastical communities reading the Bible understood it on more than one level. In this they were following the advice of the Church Fathers, who advocated interpreting the Bible morally and allegorically, in addition to literally. For example, in a prefatory letter to his Moralia in Job, Gregory the Great (d. 604) explained that understanding a text is like constructing a building:

For first we lay the historical foundation; then through typological signification we raise a citadel of faith in the structure of the mind; finally, through moral interpretation we cloth the building with colour.

The most sophisticated biblical illustrations incorporate layers of meaning into their designs in this way. In the late 11th and 12th centuries, this kind of complex composition was particularly popular in the Meuse valley, in modern day Belgium. This method, often with numerous inscriptions and biblical quotations embedded in the image, was employed to decorate metalwork caskets, crosses and reliquaries, in addition to books. 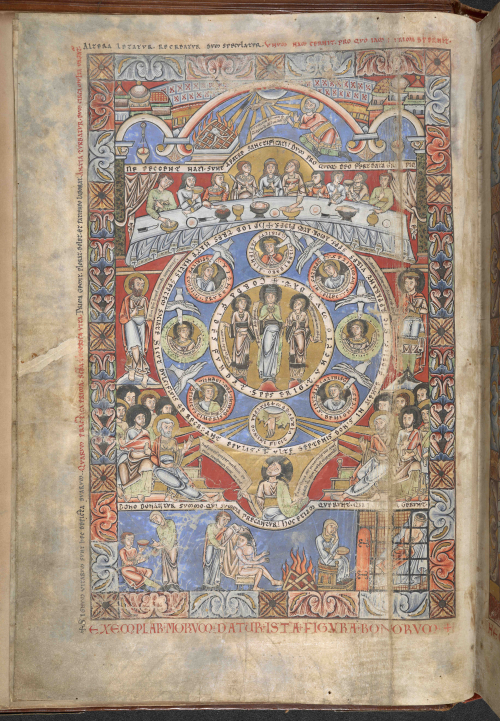 Allegory of the Virtues and the Corporal Works of Mercy, the Floreffe Bible,

One of the most elaborate and complex examples of this type of decoration in any medium occurs in a large two-volume Bible made in the Premonstratensian abbey of Floreffe, on the river Sambre near Namur, c. 1170. The Bible is another ‘giant’ Romanesque Bible, measuring 475 x 330 mm, like the Worms, Stavelot and Arnstein Bibles explored on this blog recently. It is fully digitised and available online: Add MS 17737 and Add MS 17738.

The second volume begins with the book of Job illustrated with a stunning double-page painting. Parts of the image are straightforward literal renderings of verses from the first chapter of Job. For example, near the top of the left-hand page seven men and three women are seated together at a long table covered with different dishes. This party is made up of Job’s children: his seven sons ‘made a feast by houses, every one in his day. And sending, they called their three sisters, to eat and drink with them’ (Job 1:4).

Above the feasting scene, Job is shown offering a sacrifice to God, with the hand of God emerging making a sign of blessing. The text recounts that after each feast, Job would do this for his children ‘ne [forte] peccaverint filii mei et benedixerint Deo in cordibus suis’ (in case perhaps my children have sinned and cursed God in their hearts, Job:1:5), as quoted on the scroll that he holds in his left hand. 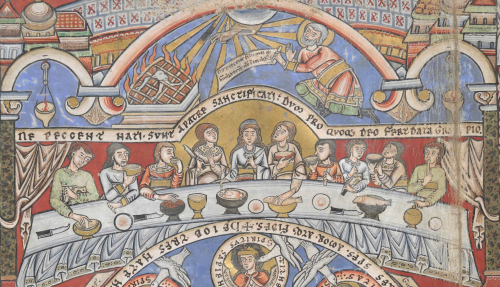 The feast of Job and his children, with Job making a sacrifice above, the Floreffe Bible, Add MS 17738, f. 3v (detail)

In contrast, the images below this become increasingly layered in meaning. The central image depicts the three theological virtues, Faith, Charity and Hope surrounded by personifications of the Seven Gifts of the Holy Spirit in roundels. This corresponds to a moral interpretation of Job made by St Gregory in his Moralia in Job. St Gregory explained that Job’s three daughters are to be understood as the three theological virtues, and his sons as Seven Gifts of the Spirit mentioned in Isaiah 11:2.

The eighth roundel contains the right hand of the Lord, which proclaims Dextera Domini fecit virtutem (The right hand of the Lord hath wrought strength, Psalm 117:16), and points directly below to a figure of Christ, with rays extending diagonally to twelve seated nimbed men. This image adds a further level of allegorical interpretation of the biblical text, in which the seven sons of Job are equated with the Apostles, who at Pentecost are filled with the sevenfold grace. (As explored by Anne-Marie Bouché, 'The spirit in the world: the virtues of the Floreffe Bible frontispiece: British Library, Add. Ms. 17738, ff. 3v-4r' in Virtue & Vice: The Personifications in the Index of Christian Art, ed. by Colum Hourihane (Princeton, 2000), pp. 42-65.) 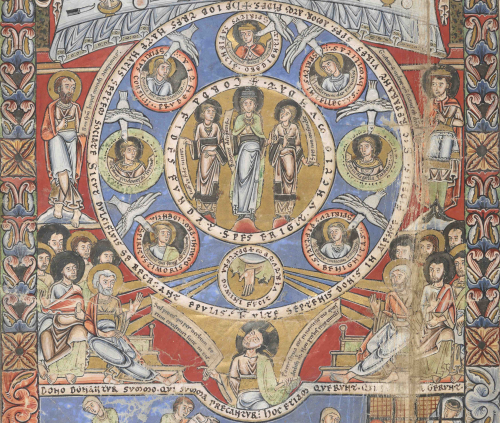 Faith, Charity and Hope surrounded by personifications of the Seven Gifts of the Holy Spirit, the Floreffe Bible, Add MS 17738, f. 3v (detail)

Below the Apostles is another interpretation of the seven virtues. The scene depicts the seven Corporal Acts of Mercy derived from Matthew 25:35-36 and Tobit 1:17, here illustrated by scenes of feeding the hungry, clothing the naked, providing shelter for the homeless and visiting the prisoner.

The Corporal Acts of Mercy, feeding the hungry, clothing the naked, providing shelter for the homeless and visiting the prisoner, the Floreffe Bible, Add MS 17738, f. 3v (detail)

On the opposite page is an image of the Transfiguration, during which Christ, flanked by Moses and Elijah, is ‘transfigured’ to appear in glory to Sts John, Peter and James (Matthew 17:1-9; Mark 9:2-8; and Luke 9:28-36). It is situated directly above a scene of the Last Supper conflated with Christ washing Peter’s feet. Like the facing page, numerous inscriptions interpret the images and their relationship to the forthcoming text. Directly above the two scenes a titulus explains that: ‘that which Moses veiled, behold the voice of the fathers reveals, and that which the prophets covered, Maria brought forth (Quem Moyses velat vox ecce paterna revelat. Quemq[ue] prophetia tegit est enixa maria). 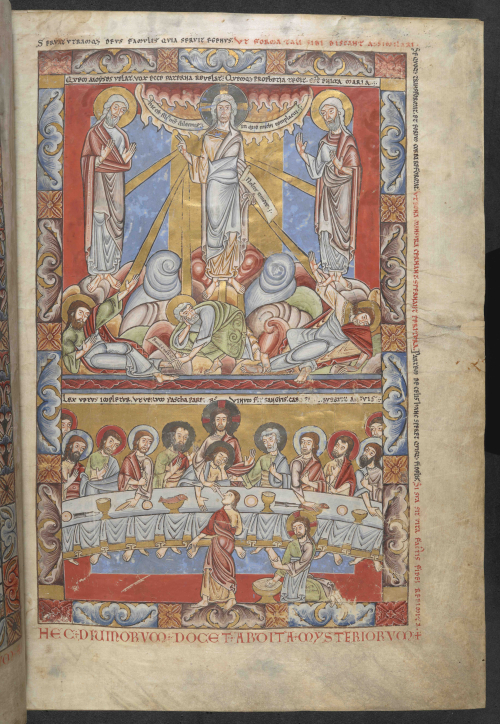 The Transfiguration and the Last Supper, the Floreffe Bible, Add MS 17738, f. 4r

This tour de force of biblical interpretation explored visually demonstrates the sophistication of the accompanying illustration to a grand monastic Bible.

To read more about the decoration of this Bible, see the recent post about the opening to the Gospel of St Mark.