The monumental art of the Stavelot Bible

Around fifty years before the making of the Worms Bible, which we featured recently on the blog, another giant Bible was produced at the abbey of St Remaclus at Stavelot, not far from Liège, in modern-day Belgium. Both volumes of the awe-inspiring Stavelot Bible are digitised and available online as Add MS 28106 and Add MS 28107.

The monk Goderannus recorded that he and brother Ernesto spent four years working on the Stavelot Bible, and he was precise about what had been achieved in that time. He stated that the writing, illuminating and binding (scriptura, illuminatione, ligatura) had all been completed in 1097.

Despite this specificity, scholars still disagree on whether the two monks (or Ernesto at least) were the artists as well as the scribes of this impressive work. Some speculate that the artists were paid laymen instead of monks, and hence were omitted from the long colophon. Moreover, the difference in style between initials and other painting included in the work suggests that more than two people may have been involved in their production—one scholar identified five different artists. 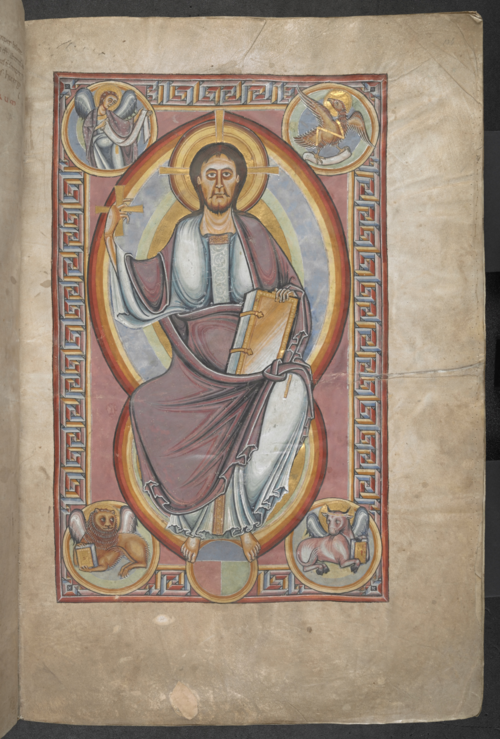 What is clear, however, is the quality and the sheer monumentality of the painting included in the Stavelot Bible. Its most famous image, which opens the New Testament, is the huge full-page vision of Christ in Majesty surrounded by the symbols of the Four Evangelists. This painting is a powerful icon-like frontal presentation of Christ at the end of time. Christ’s feet rest on the globe of the world divided into three parts (a medieval ‘T-O’ map, of the orbis terrarum, which looks like the letter ‘T’ inside the letter ‘O’), and he holds a golden cross in his left hand. For contemporary viewers, this image may have recalled large scale paintings in church apses, as John Lowden suggested. 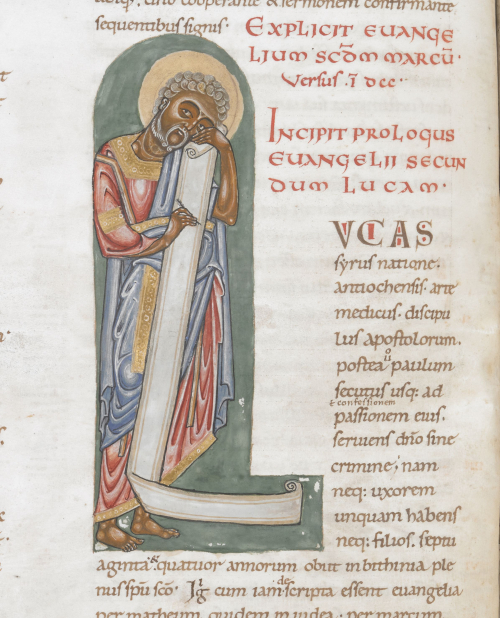 The tall standing or seated prophets and Evangelists depicted at the beginning of their texts are equally expressive and prepossessing. These include unusual standing Evangelists holding scrolls before the prefaces to their Gospels, such as the image of St Luke above. 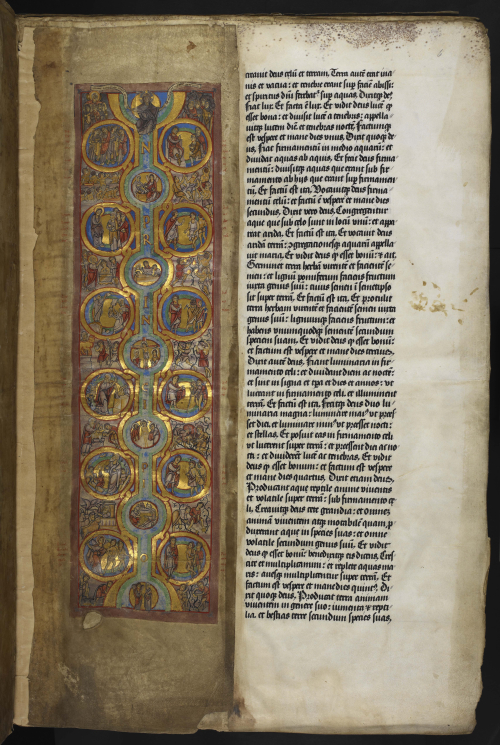 Painting on a much smaller scale is featured in the Bible's historiated initials. The most complex symbolism is reserved for the long initial ‘I’ (In principio) of Genesis that opens the first volume of the Stavelot Bible. Many small pictures cluster in and around the initial, and depict not the Days of Creation, as is typical in Genesis initials, but rather a series of scenes that provide a visual commentary on the story of salvation.

The words In principio read downwards in the centre, but all of the image sequences begin at the bottom of the page. The central group of roundels start with the Annunciation and culminate with an image of Christ in Majesty at the top. The Crucifixion forms the central part of the composition, and all around are other images from both the Old and New Testaments.

On the left side of the initial is the Expulsion of Adam and Eve from the Garden of Eden, Noah building the Ark, the Sacrifice of Isaac, and Moses receiving and then breaking the Tablets of the Law, below Christ preaching and angels. Related events fit in around these scenes, such as the Worshipping of the Golden Calf below Moses. 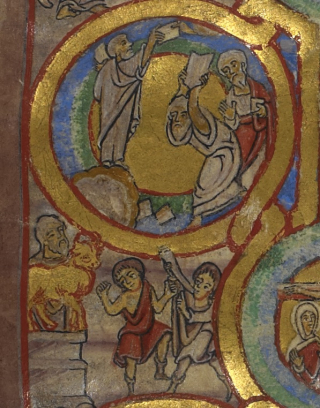 Detail of Moses receiving and breaking the Tablets of the Law, and the Worship of the Golden Calf, Add MS 28106, f. 6r

To the right of the central axis is an extended rare depiction of one of Christ’s parables, that of the Labourers in the Vineyard (Matthew 20:1-6), in which the kingdom of heaven is likened to a householder who hires labourers to work in his vineyard at different times of the day. All around the medallions in which the hiring process is enacted the labourers are engaged in pruning and caring for the vines. 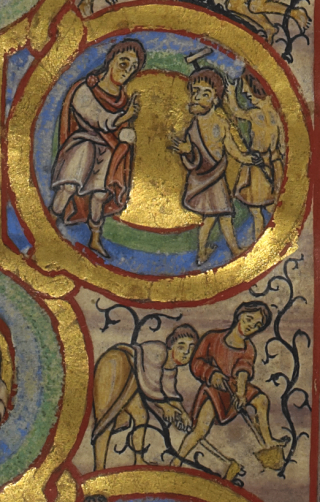 Detail of the householder hiring labourers, and the labourers at work in the vineyard, Add MS 28106, f. 6r

This creative and unusual interpretation suggests a relatively high level of familiarity and understanding of the biblical text. In turn, this implies that if brothers Goderannus and Ernesto did not complete the illumination of the Bible themselves, they may have designed and supervised the work of those who did.

You can read more about the Stavelot Bible and find out about two other manuscripts from Stavelot in our previous blogposts. For another giant Romanesque Bible, see our recent blogpost on the Arnstein Bible.

Wayne Dynes, The Illuminations of the Stavelot Bible (New York, 1978).