Defender of the Faith

On 11 October 1521, Pope Leo X (b. 1475, d. 1521) conferred on King Henry VIII of England (r. 1509–1547) the title Fidei defensor or ‘Defender of the Faith’. Pope Leo made his declaration in a papal bull (a decree or charter issued by a pope), the original of which survives as Cotton MS Vitellius B IV/1. This important document has been recently digitised and it can now be viewed online on our Digitised Manuscripts site. 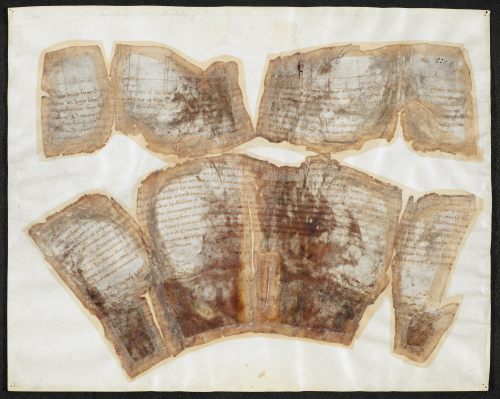 Henry was given the title Defender of the Faith in recognition for his Assertio Septem Sacramentorum (Defence of the Seven Sacraments). Possibly written in consultation with Thomas More (b. 1478, d. 1535) and Cardinal Wolsey (b. c. 1473, d. 1530), Henry’s principal statesmen at this point in his reign, this theological treatise acted as a response to the pronouncements of the German theologian Martin Luther (b. 1483, d. 1546), whose ideas helped to shape the Protestant Reformation movement during the 16th century.

Luther had authored three major reforming pamphlets in 1520, including one particularly incendiary text entitled De Captivitate Babylonica Ecclesiae (On the Babylon Captivity of the Church) which challenged some of the major doctrines of the Catholic Church and the authority of the Pope in Rome. The texts circulated widely, including at the English court, and played a significant role in Luther’s excommunication by Pope Leo in the following year. 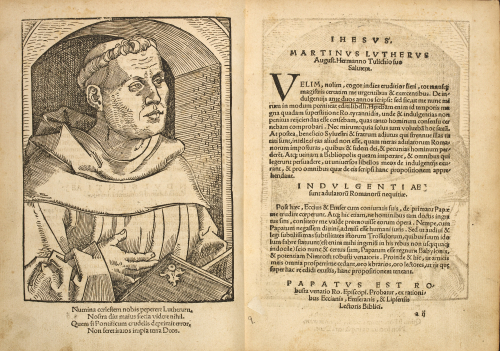 The opening of a printed copy of Martin Luther’s pamphlet On the Babylonian Captivity of the Church, facing a portrait of the German theologian: British Library, 697.h.21, sig aii.

Henry’s treatise was intended as a defence of the Church and the supremacy of the Papacy from Luther’s ideas and writings, and the English king did not hold back in his condemnation of the German theologian. In the course of the work, he called Luther a ‘serpens…venenatus’ (venomous serpent), a ‘pestis… perniciosa’ (pernicious disease), an ‘inferorum lupus’ (wolf of Hell), the ‘diaboli membrum’ (devil’s member), and a ‘detestabilis arrogantiae, contumeliae, ac schismatis buccinator’ (a detestable trumpeter of pride, abuses, and schism). Henry even compared Martin Luther to Cerberus, the three-headed dog that guarded the Underworld in Classical mythology.

The Assertio was published in mid-July 1521, but was only made available and distributed after it had been first presented to the Pope by John Clerk (b. 1481/2, d. 1541), Bishop of Bath and Wells, in a ceremony on 2 October 1521. The text also contained a letter from Henry dedicating the work to the Pope. Following its presentation in Rome, it was circulated throughout Europe and went on to become a major best-seller, running to over a dozen editions in German and Latin by the end of 1524. It even earned the attention of Luther himself, who wrote a reply in the form of a book entitled Contra Henricum Regem Anglie (Against Henry, King of the English). The British Library is now home to a number of surviving editions of the printed text of Henry’s Assertio. The title-page of one of these copies features a decorative border based on a design by the portrait artist and printmaker Hans Holbein (b. c. 1497, d. 1543). 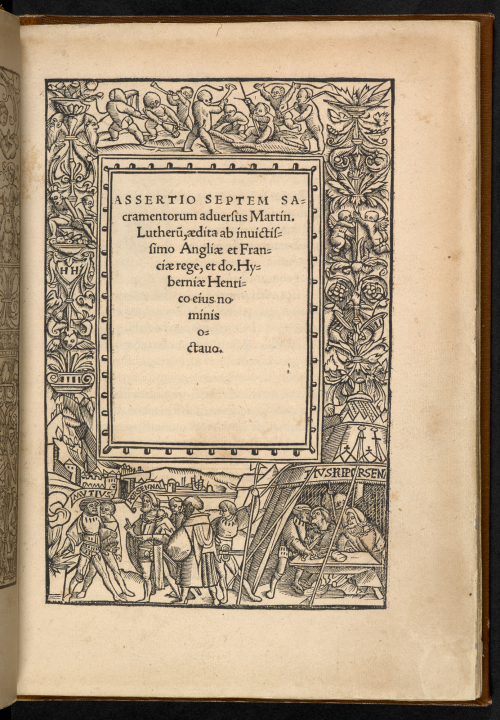 The title page of a printed edition of Henry VIII’s Assertio septem sacramentum: British Library, 9.a.9.

Pope Leo was evidently pleased with the work. It was only a few weeks after its presentation that he issued the papal bull conferring on Henry the title Defender of the Faith. The language of the bull was particularly glowing in its praise of the English king, with the Pope declaring that:

Having thus weighed and diligently considered your singular merits, we could not have devised a more suitable name, nor one more worthy of your Majesty than this most excellent title, which whenever you hear or read it, you shall remember your own virtues and highest merits.

The bull was then sent to the English court. By the 17th century, it had become part of the library of Sir Robert Cotton (b. 1570/1, d. 1631). Unfortunately, the parchment leaf suffered significant damage in the Ashburnham House fire of 1731, which accounts for its current fragmentary state. Nevertheless, much of its text remains visible, as well as the signatures of the Pope and his cardinals that appear at the foot of the document, each marked with a small cross. 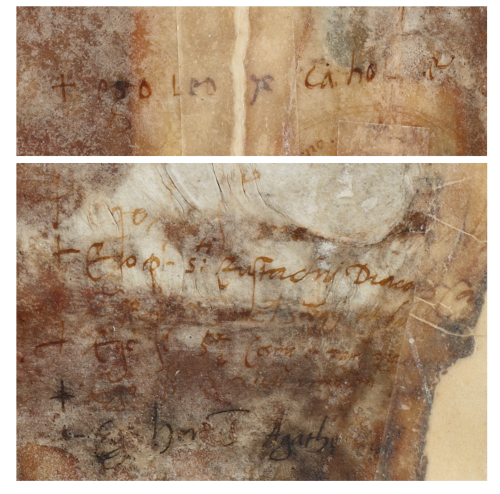 The signatures of Pope Leo X and his cardinals inscribed on the papal bull conferring on King Henry VIII the title Defender of the Faith: Cotton MS Vitellius B IV/1, detail

Henry’s positive relationship with the Papacy did not last. Only a decade after Leo X issued the papal bull, Henry decided to break away from the Church of Rome, following Pope Clement VII’s refusal to annul his marriage to his first wife Catherine of Aragon (b. 1485, d. 1536). He also distanced himself from the Assertio, claiming that he had been manoeuvred into writing it by his bishops. His actions ultimately resulted in his own excommunication by Clement’s successor Paul III (b. 1468, d. 1549) in 1538 and he was stripped of the title Defender of the Faith.

However, towards the end of Henry’s reign, in 1543, the English Parliament passed an act that restored the title for him and his successors. Since then, it has continued to be used as part of the styling of British monarchs (including the reigning Elizabeth II) to indicate their role as Head of the Church of England. It even features on coins of the realm, with the Latin Fidei defensor appearing in its abbreviated form F.D beside the Queen’s portrait.