Spreading the word: a tribute to ancient teachers

The Greek and Latin papyri, ostraca and tablets of the British Library provide incomparably rich sources for learning about ordinary people, whose lives and words remained otherwise unrecorded for many centuries. One of the most intriguing perspectives these sources reveal is on families and children. We have recently published an article surveying documents that illustrate aspects of the lives of children in Egypt between the 3rd century BC and 6th century AD, from their infancy and early school years to their marriage and first jobs.

An especially well-documented phase of the life of children is their schooling from primary to secondary or higher education. There is another aspect of school documents, however, which is just as important and fascinating as that of the children – the teachers. 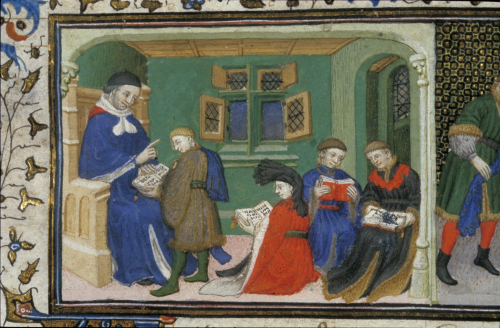 Alexander the Great in school instructed by his teacher Aristotle, from a 15th century copy of the French Alexander Romance (France, c. 1420), Royal MS 20 B XX, f. 10v (detail)

Notes, methods and even names of teachers survive in surprisingly large numbers in our collection of papyri and writing tablets. These give us intriguing details about how the foundations of literacy and numeracy were laid down thousands of years ago.

The first stage was learning to read. The way to achieve this was simple but not very easy. Similar to modern-day school education, children were first taught to recognise syllables and read them one by one to form the words. The difference between current and ancient practice, however, was that in ancient schools the texts used for this purpose were not easy reads as nowadays, but samples taken from classical authors. 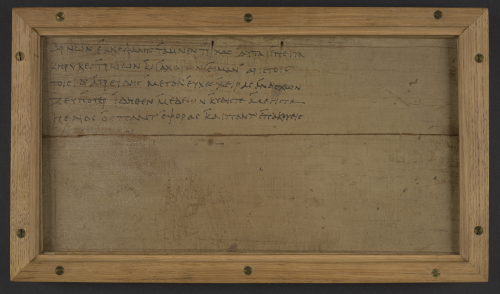 Written with black ink on a whitened board, this 1800-year-old wooden tablet contains 5 lines from Book 3 of Homer’s Iliad copied in the neat hand of a teacher. Compared to the economic layout of texts in contemporary manuscripts where there were usually no spaces left between the words, on this tablet Homer’s words are neatly divided to make it easier to read. Moreover, the teacher placed strokes above the lines to mark the end of the syllables in each word. This practice, unknown in manuscripts designed for advanced readers, shows that the board was probably used to teach children to recognise and read in syllables.

The larger size of the wooden board – about the same as our A4 instead of the more standard A5 format of waxed school tablets – suggests that it was used for demonstration purposes. It may have served either as a blackboard in a classroom or a sample circulated in class. It is not hard to imagine the children holding and studying it, trying to decipher and read out the lines from Homer’s Iliad, ‘Sun, who be-hold-est all things and hear-est all’ (Iliad iii, 276). 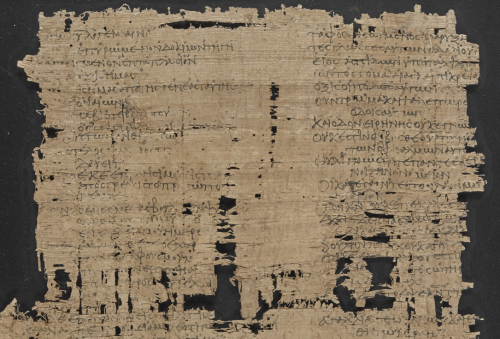 Another, slightly different, reading exercise survives on a late 3rd-century papyrus roll that contains the text of Psalms 12-15. The layout of the text on the papyrus is the same as it would be in a standard manuscript with the text arranged in two columns with no space left between the words.

However, the large, circle-shaped marks above the lines, neatly arranged over each of the syllables of the words, suggest that the papyrus roll was also used in school education. It may have been designed for more advanced readers who no longer needed spaces between the words but who would still need some help to recognise syllables to ease reading of the rather complicated text of the Psalms.

Psalm 13: 3, ‘the way of peace they have not known: there is no fear of God before their eyes’, with syllable marks above the letters (Egypt, 3rd century) Papyrus 230 verso

Interestingly, the other side of the roll contains a classical text from the 4th-century BC rhetorician Isocrates, which has also been supplied with syllable marks. This shows how classical ‘pagan’ and Judaeo-Christian texts were used together in primary education of the late 3rd to early 4th century. 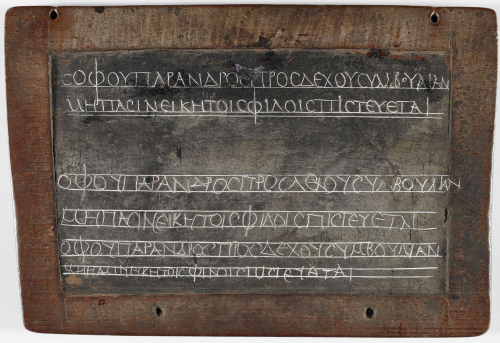 Teacher’s handwriting in the first two lines of a wax tablet followed by the pupil’s copy of the same (Egypt, 2nd century) Add MS 34186 (1)

Another 2nd-century document shows how writing was taught in ancient schools. This little wax tablet, consisting of two parts to be folded up as a booklet, was a star item of the British Library’s recent exhibition, Writing: Making Your Mark. Scratched in the upper part of the waxed surface are two lines of a maxim, ‘Accept advice from someone wise / it is not right to believe every friend of yours’, in the beautifully tidy hand of a teacher. The pupil copied it out below, with mistakes and irregularities that are detailed in a separate article.

Wax tablets were perfect for use in schools. Writing in wax was easy to correct because you could erase the words by smoothing the wax with the other end of the stylus. Additionally, the child could place their stylus in the teacher’s deeply scratched lines and follow the letter shapes to learn how to imitate the script. The tablet shows very clearly how the individual hand of a teacher could influence the handwriting of generations in the future.

In addition to actual teaching aids used in class, there are unique survivals of teachers’ private notes. This set of eight little wooden tablets from about 1800 years ago preserves the handy notebook of a teacher who put his name, 'Epaphroditos', on the first tablet to mark his possession. The eight wooden boards would have been fastened together by cords passed through two holes in one of the longer sides of each of the tablets. Each side of the eight boards was neatly numbered on the left to facilitate orientation.

Teachers notes on part 4 of a set of wooden tablets, in three columns, first two with explanations of the alphabet, third with a set of riddles in questions (Egypt, 3rd century), Add MS 37533 (4)r

The texts are recorded in the rapid and practised cursive hand of a teacher, neatly organised into units for teaching probably at an elementary school. The left-hand side of page 8, for example, shows the letters of the alphabet with notes placed next to each clarifying whether the letter is a vowel (long or short or both), or a simple (such as K) or compound (such as X) consonant. On the right-hand side there is a list of short riddles in the form of questions and answers such as ‘what makes life sweet – happiness’. These may have been used as writing samples for wax-tablet homework-books like the one above.

The unique collections of papyri and tablets in the British Library show not only the labour of the children learning to read and write but also pay tribute to the generations of teachers, whose tireless educational work ensured that classical and Christian Greek and Latin texts came down to us.

You can find out more about the lives and education of children in Egypt between the 3rd century BC and 6th century AD in our article on the Greek webspace.