The 800th anniversary of the translation of Thomas Becket

On 29 December 1170, Thomas Becket, the archbishop of Canterbury, was murdered in Canterbury Cathedral. The event shocked Christendom, and Becket was canonised as a martyr just three years later. On this day 800 years ago his body was translated (moved) from the crypt in Canterbury Cathedral to a new shrine in the Trinity Chapel. 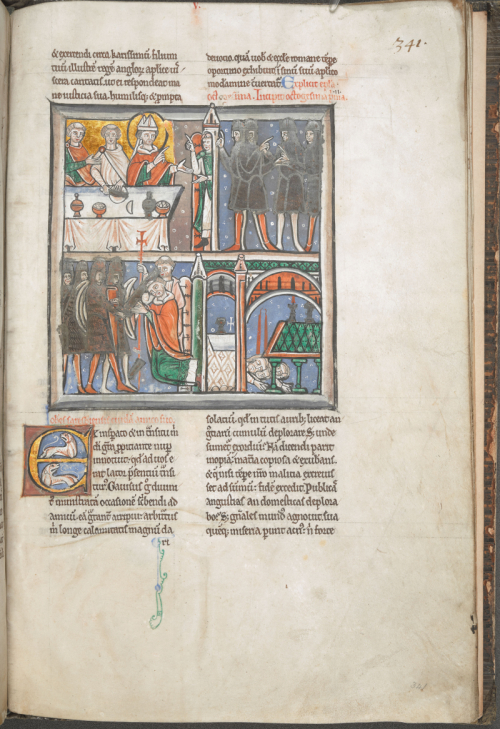 Becket’s murder was recorded in a letter written by John of Salisbury (d. 1180), who was an eyewitness to the event. A copy of this letter is included in an early collection of letters assembled by Alan, the prior of the Cathedral from 1179 –1186 and later abbot of Tewkesbury (d. 1202), where it is illustrated by the earliest known representation of the murder (Cotton MS Claudius B ii).

Becket rose from relatively humble beginnings as the son of a London merchant to serve as chancellor to Henry II (r. 1154–89) from 1154, before becoming archbishop in 1162. Thereafter, he clashed with the King in defence of the autonomy of the Church. Thomas fled into exile in France in 1164, returning to England in early December 1170. Upon his return, tensions with the King still were unresolved, and a few weeks later, four knights left Henry’s court in Normandy and forced themselves into the Archbishop’s presence.

Detail of the earliest known representation of the murder of St Thomas Becket: Cotton MS Claudius B ii, f. 341r

The images included in this manuscript narrate the sequence of events. In the upper register the Archbishop is at table when a messenger announces the arrival of the four knights, outside the door to the right. Below, having taken up arms, the knights enter the cathedral and attack Becket while he is kneeling before an altar. The knight wielding the sword may be Reginald Fitzurse, if the small animal head on his shield can be identified as a bear (ursus is ‘bear’ in Latin). To the right are four prostrated figures who venerate St Thomas at his tomb, perhaps representing the later penitence of the knights. 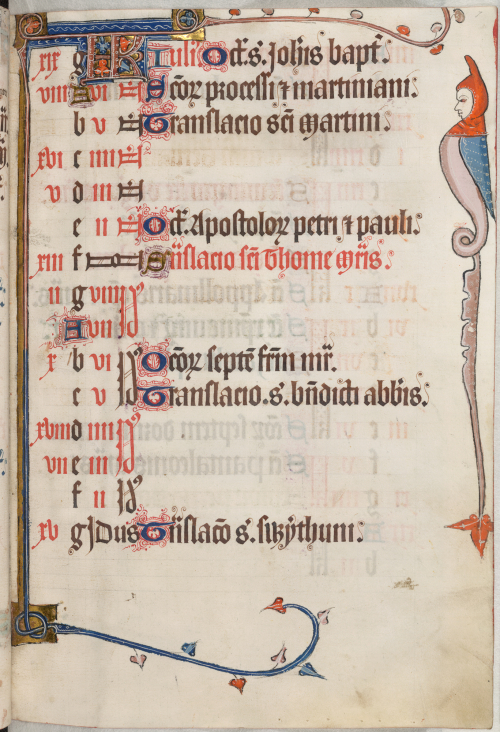 In many English medieval calendars this translation date is included as a feast day. For example, the Luttrell Psalter made for Sir Geoffrey Luttrell features an entry for ‘the translation of St Thomas, martyr’. This entry escaped later censorship following the November 1538 Proclamation issued jointly by Henry VIII and Thomas Cromwell by which Becket was characterised as a ‘rebel and traitor to his prince’ rather than a saint, and accordingly that ‘his name, shall not be observed, nor the service, office, antiphons, collects, and prayers in his name read, but rased and put out of all the books.’ The date of Becket’s martyrdom on 29 December in the Luttrell Psalter, however, was struck out by a single, rather discreet, line. 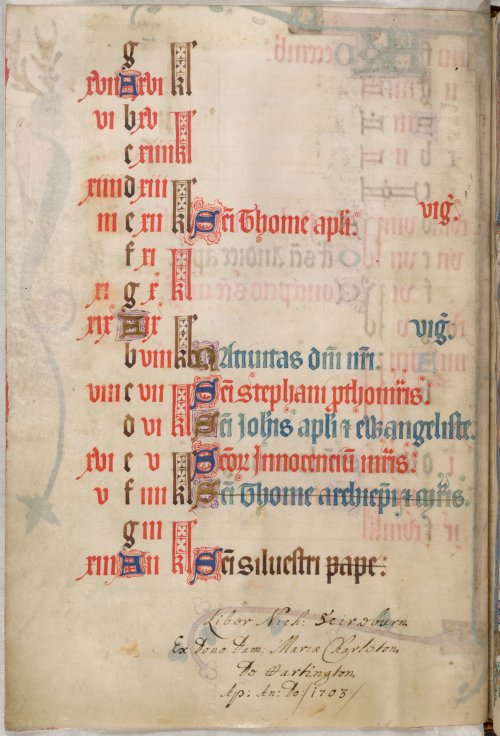 Another calendar in which the translation survives on 7 July is an early 15th-century example from the diocese of Norwich. Here the image is of Becket as a young man in a bishop’s mitre, holding a sword representing the weapon of his martyrdom together with a cross-topped staff.

To discover more about Thomas Becket, you can read our earlier blogposts about Becket’s translation, Becket's martyrdom and erasing references to Becket in manuscripts. The letter collection (Cotton MS Claudius B ii) was digitised thanks to funding from The Polonsky Foundation England and France 800-1200 project, and you can view the manuscript's collection item page or read more about medieval saints in manuscripts on the project website.

Part of the Polonsky Digitisation Project
Supported by