The maps of Matthew Paris

Matthew Paris (b. c. 1200, d. 1259) was a monk at the Benedictine Abbey of St Albans in Hertfordshire who was renowned for his work as a chronicler, scribe, and artist. His entry in the St Albans Benefactor’s Book (Cotton MS Nero D VII), produced a little over a century after his death, describes him as an ‘incomparabilis monographus et pictor peroptimus’ (a writer without equal and an excellent artist). Numerous surviving books show evidence of his hand and the influence of his distinctive style of drawing and painting. His notable works include the Chronica Maiora, a universal history of the world, and Historia Anglorum, a history of England, both of which he copied and illuminated himself. 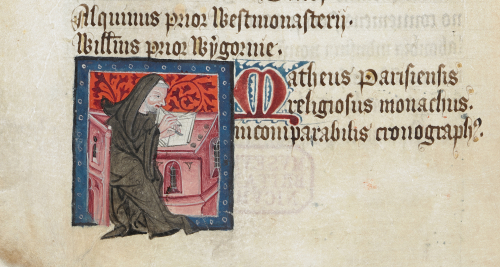 In addition to his other accomplishments, Paris is also widely regarded as one of the greatest cartographers of his time. All of the British Library’s examples of his maps have now been digitised and can be viewed on our Digitised Manuscripts site.

Paris’ maps of Britain are significant in the history of medieval cartography as they represent some of the first attempts to depict the actual physical appearance of the country. Earlier maps more commonly represented the relationship between major regions or cities in schematic diagrams that provided little indication of distance or topography. Four of Paris’ maps of Britain survive, three housed at the British Library, and the fourth in Cambridge, Corpus Christi College, MS 16. 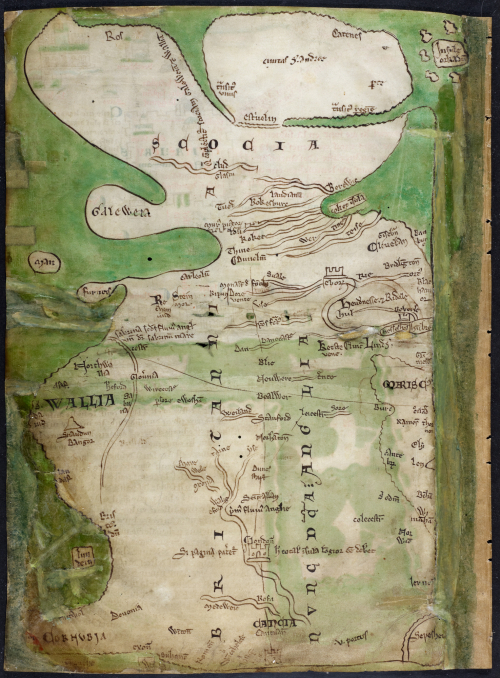 The first map appears in a manuscript containing copies of the Chronica maiora and Historia Anglorum written in Paris’ own hand (Royal MS 14 C VII). Though it is simpler than other surviving examples, the map still includes a number of significant geographical features, such as the River Thames, the Isles of Man and Wight, Snowdon in North Wales (with a drawing of the mountain), and the Orkneys off the coast of Scotland. Paris also features a route running across the country from the south coast all the way up to Durham. The major cities of Dover, London, and York (here known by its Latin name Eboracum) are accompanied by small drawings of castles or forts, with crenellated battlements. The second of Paris’ maps was originally drawn on a single parchment leaf that was then folded, cut, and inserted into another volume, known as the Collectanea of John of Wallingford (d. 1258). The map was damaged in the Cotton Fire of 1731 and is now bound separately (as Cotton MS Julius D VII/1).

John of Wallingford was the infirmerer of St Albans Abbey and a contemporary and friend of Paris. His Collectanea is a miscellany that includes a huge variety of material: medical recipes in Middle English, copies of charters and historical texts, and even a table for predicting the time of high tide at London Bridge, as well as a number of drawings by Paris himself. John added his own additions and annotations to the map of Britain in black ink, and he used the reverse of the leaf for the text of his Chronicle, which features a number of tables and diagrams. 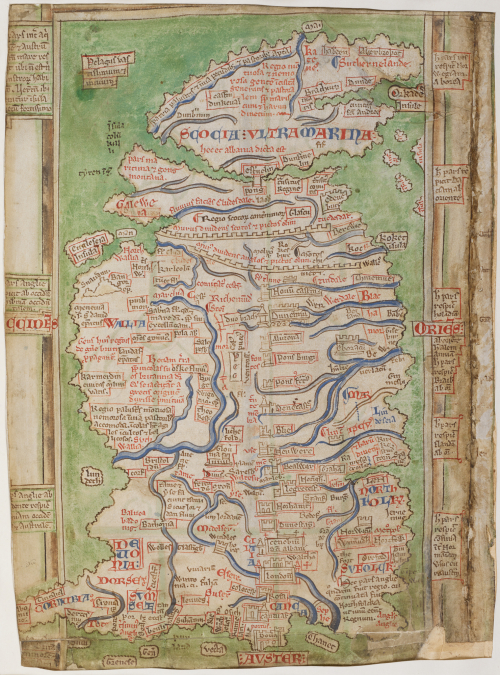 By far the most detailed of Matthew Paris’ surviving maps of Britain once belonged to a manuscript of Paris’ Abbreviatio compendiosa chronicorum Anglie (Brief Abridgement of the Chronicles of England), a summary of his Historia Anglorum that covers the period in English history from the end of the first millennium to around 1255. It is now bound separately (as Cotton MS Claudius D VI/1).

The map effectively provides a visual complement to Paris’ Historia. Over 250 named places appear – all of which are mentioned in the text itself – including over 80 cathedrals and monasteries, 41 castles, and at least 30 ports, as well as most of Britain’s major mountain ranges and rivers. Paris included depictions of both Hadrian’s Wall, captioned 'murus dividens anglos 7 pictos olim' (the wall once separating the English and the Picts), and the Antonine Wall, or 'murus dividens scotos 7 pictos olim' (the wall once dividing the Scots and the Picts).

You can explore all the map’s details in this wonderful interactive annotated copy designed by Dr John Wyatt Greenlee (Cornell University).

The Road Map of Britain 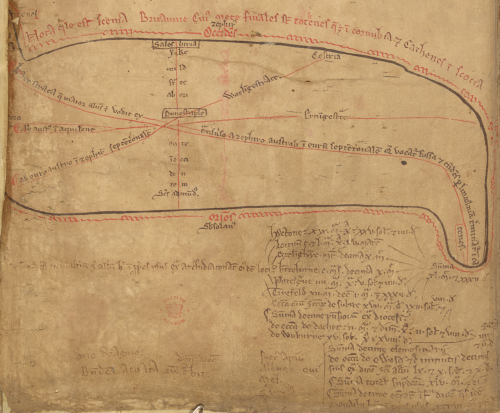 An altogether different type of map is found in Paris’ Liber additamentorum (Book of Additions), a collection of original literary treatises and historical documents he assembled to support his research. It is orientated with Occidens (West) at the top and Oriens (East) at the bottom, and instead of marking topographical features, it outlines four major military roads established during the Roman occupation of Britain, which were still in use during Matthew Paris’ lifetime: Fosse Way (running from Exeter to Lincoln), Ermine Street (London to York), Ickneild Way (Bury St Edmunds to Salisbury) and Watling Street (Dover to Chester). 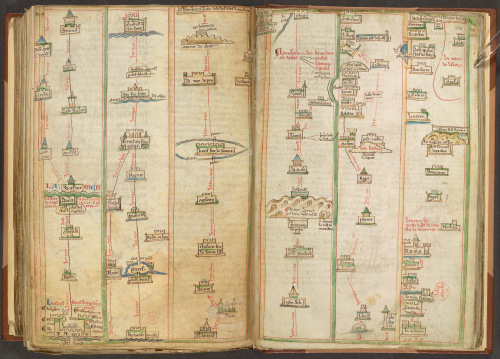 Paris also created a number of expanded road maps known as itineraries, which detail the routes undertaken by travellers going on pilgrimage to Italy and the Holy Land. There are two housed at the British Library, the first also appearing in Paris’ Book of Additions. Drawn across a single opening in the manuscript, this itinerary outlines a potential route that could be taken between London and Naples. It features the various cities, ports, abbeys and monasteries, and other major sites that a pilgrim might expect to encounter on their journey. These are all connected by a series of lines drawn in red, with accompanying inscriptions that indicate how long it would take between each stop on the way. A particularly notable inclusion is a drawing of the hospital found at the top of Mount Cenis, the main Alpine pass that pilgrims would take to reach northern Italy. 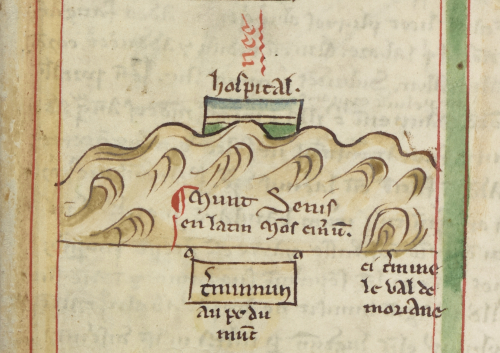 The second itinerary depicts the route between London and Palestine. It is organised according to the same principles as the Nero map, but it is also far more complex and ambitious in its design, running across multiple leaves, with numerous detailed representations of the different sites featured on the pilgrimage route. Parchment flaps have also been stitched to some of the pages, to allow for additional drawings and provide alternative routes and information for travellers. The final section of the map is dominated by a large outline of the city of Acre – one of the only remaining Crusader strongholds in the region by Matthew Paris’ time – and other important sites in the Holy Land, such as Jerusalem (labelled ‘CIVITAS IERUSALEM’), Mount Sinai, and Bethlehem, which appears with its star shining in the sky above. 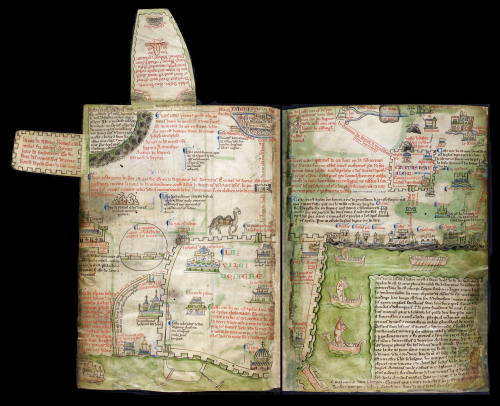 The final section of an itinerary map of the route between London and the Holy Land, showing an outline of the city of Acre, as well as the cities of Jerusalem and Bethlehem (Royal MS 14 C VII, ff. 4v-5r) 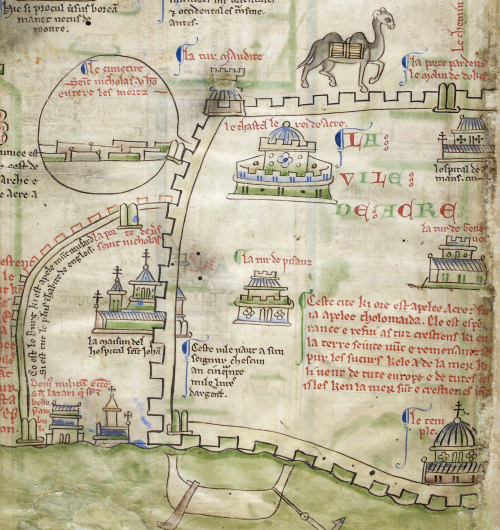 A detail from an itinerary map designed by Matthew Paris, showing an outline of the city of Acre in the Holy Land (Royal MS 14 C VII, f. 4v detail).

We hope you enjoy exploring all the Matthew Paris maps as much as we have on our Digitised Manuscripts site!

Lewis, Suzanne, The Art of Matthew Paris in the Chronica majora (Berkeley: University of California Press, 1987).