Picturing the Old Testament in the Rochester Bible

So far in this series of posts on the great Romanesque Bibles held by the British Library, I have focused on those made on the Continent: the Worms Bible, Arnstein Bible, Stavelot Bible and Floreffe Bible. Today’s blog is about an English example, from the former cathedral priory of St Andrew, Rochester, in the second quarter of the 12th century. Unlike the others, which are all in two huge volumes, only part of the Rochester Bible survives, now divided between the Royal collection in the British Library and the Walters Art Gallery in Baltimore. Both portions are fully digitised and available online on the British Library’s Digitised Manuscripts site (Royal MS 1 C VII), and on the Walters Art Museum's site (MS W.18).

Together these two parts constitute one of only eleven known extant English Romanesque display Bibles. Although it is slightly smaller than the Continental manuscripts featured, measuring 395 x 265 mm, the Rochester Bible is still a larger format than most other manuscripts from the period. The Royal portion of the Bible includes only the books of Joshua, Judges, Ruth and I–IV Kings (I–II Samuel and I–II Kings in modern Bibles), while the Walters portion contains the New Testament. Four of the seven books have historiated initials (letters containing identifiable scenes or figures) depicting events described in the first chapters of these books. These historiated initials occur only in the Royal portion of the Bible, at the beginning of four of its seven books: Joshua, and I, II and IV Kings. 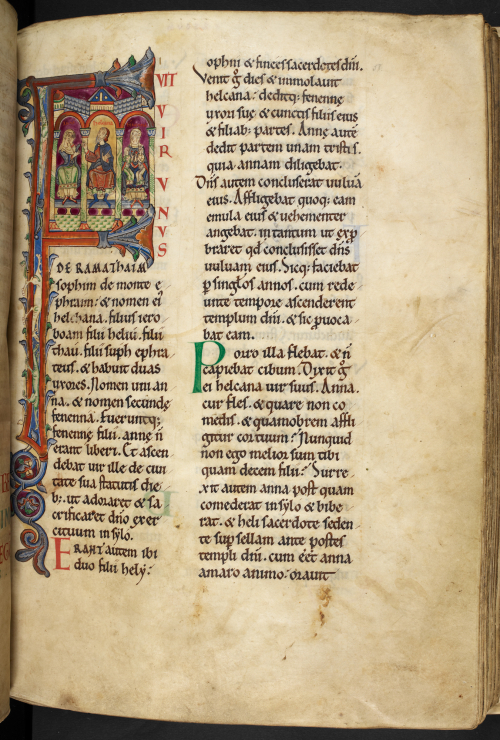 Historiated initial of Elkanah and his wives at the beginning of I Kings, the Rochester Bible, Royal MS 1 C VII, f. 58r 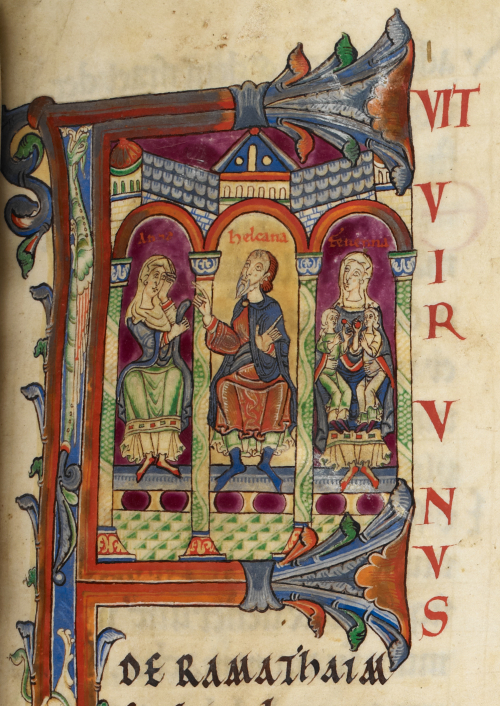 Historiated initial of Elkanah and his wives at the beginning of I Kings, the Rochester Bible, Royal MS 1 C VII, f. 58r (detail)

In contrast to the incredibly complicated theological artwork of the Stavelot Bible and Floreffe Bible, the illustrations of these books initially appear to be more straightforward. For example, I Kings (I Samuel) begins with a discussion of Elkanah (Elcana in the Vulgate) and his two wives. Each is labelled in the initial with their names above. To his left, Peninnah (Phenenna) holds two children, and in contrast, the childless Hannah (Anna), to his right, holds one hand to her face, perhaps in a gesture of sorrow. This is a succinct summary of the first verses: ‘There was a man of Ramathaimsophim, of mount Ephraim, and his name was Elcana, . . . And he had two wives, the name of one was Anna, and the name of the other Phenenna. Phenenna had children: but Anna had no children’. (I Kings 1: 1-3). Historiated initial of the Ascension of Elijah at the beginning of IV Kings, the Rochester Bible, Royal MS 1 C VII, f. 154v 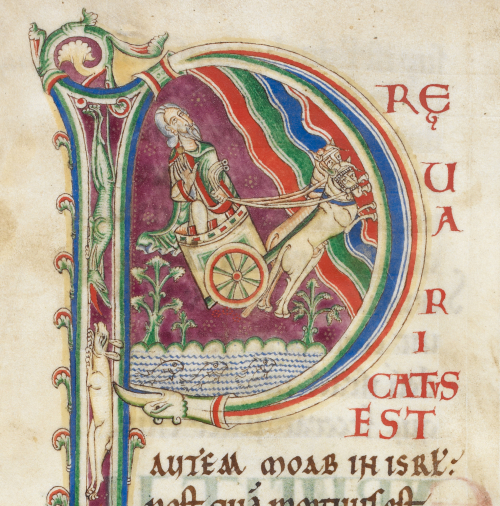 Historiated initial of the Ascension of Elijah at the beginning of IV Kings, the Rochester Bible, Royal MS 1 C VII, f. 154v (detail)

Similarly, the initial at the beginning of IV Kings illustrates the second chapter of the text, which describes how, after seeing ‘a fiery chariot’ with ‘fiery horses’, Elias (Elijah) ‘went up by a whirlwind into heaven’ (IV Kings 2:11). Yet as C.M. Kauffmann has noted, the choice of this subject for the illustration rather than an event from the first chapter of the book underlines the significance of the Ascension of Elijah as a prefiguration of Christ’s Ascension. Historiated initial of Moses and Joshua at the beginning of Joshua, the Rochester Bible, Royal MS 1 C VII, f. 2v 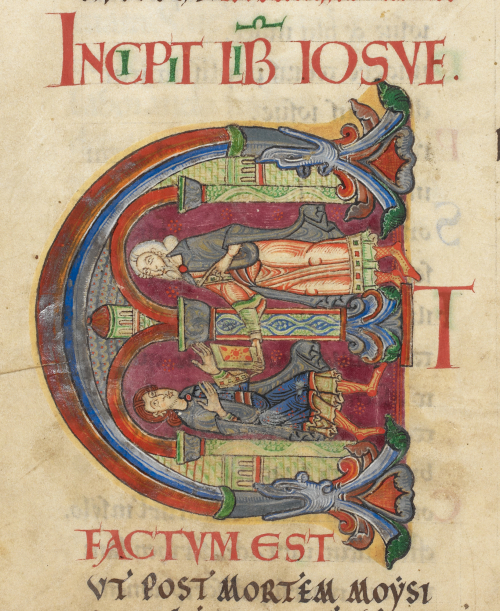 The imagery for the book of Joshua may be viewed as another layered interpretation of the text. The initial shows two men conversing: one young and beardless, and the other with grey hair and beard. The older man is handing the younger man a book. In order to fit the figures into the initial ‘E’, the artist presented the scene sideways—a relatively rare solution—and used the bar of the ‘E’ as a column, creating a setting within a building. Unlike Elkanah and his wives, the figures are not labelled. Nevertheless, it seems likely that this scene represents the transmission of the law from Moses to Joshua, as set out a few verses later:

So this too, could have Christian significance as a reference to the Old Law that will be fulfilled in the New. It also echoes the actions of the blessed man of Psalm 1, who meditates on the law day and night, and who was understood by some Church Fathers to be a prefiguration of Christ. Further, as Lucy Freeman Sandler remarked, this verse begins next to the decorated initial in the right-hand column of the page, and the word ‘law’ (legem) appears only three lines lower than the image of the book in the initial (private communication).

Together, therefore, these initials enhance not only the elegant presentation of the Word, but also its interpretation.

And our earlier blog post on the Rochester Bible.