Digitisation of the Sherborne Missal

Weighing as much as the average 5-year-old child and containing more paintings than most art galleries, the Sherborne Missal is a titan of a manuscript. The breath-taking quality of its artwork has inspired art historians to declare it, 'the unrivalled masterpiece of English book production in the fifteenth century' (Kathleen Scott), and 'beyond question the most spectacular service book of English execution to have come down to us from the later Middle Ages' (Janet Backhouse).

It is particularly exciting, then, to announce that this exceptional manuscript is now available to view in full as a pilot project in our Universal Viewer. 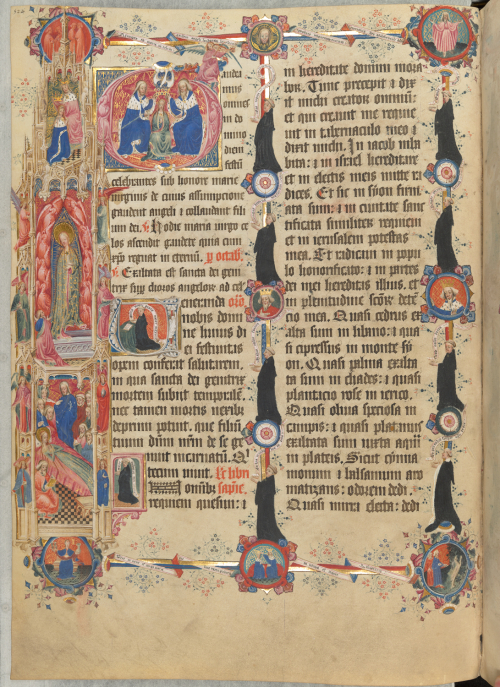 Feast day of the Assumption of the Virgin, with miniatures of the Virgin Mary and Benedictine monks: Add MS 74236, p. 524

The Sherborne Missal (Add MS 74236) is a service book containing all the texts required for celebrating Mass on the different feasts, holidays and saints’ days throughout the year. It was made for the Benedictine abbey of St Mary in Sherborne, Dorset, between approximately 1399 and 1407.

We know a surprising amount about the people responsible for creating the Sherborne Missal, largely because it calls attention to its patrons and makers at every opportunity. The book was probably commissioned by Robert Brunyng, the abbot of Sherborne from 1385–1415, whose image appears in the manuscript about a hundred times. It is hard to think of another medieval person for whom such a remarkable number of portraits survive. These portraits may also provide some insight into Brunyng’s tastes and personality. In two instances he is depicted with a group of small hunting dogs, which scholars have suggested may be his personal hounds. On many of the feast days he is shown wearing exceptionally fine vestments of brocade, embroidery and jewels. 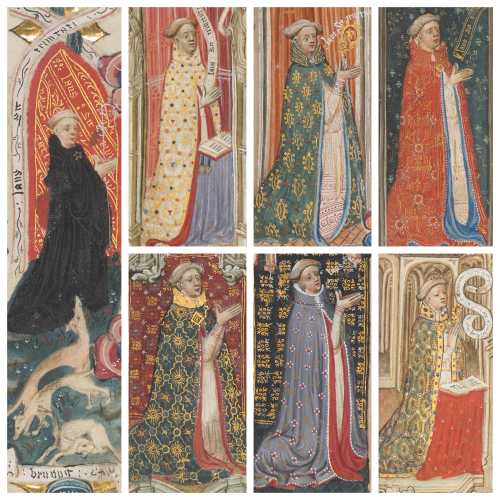 On a number of occasions Brunyng is depicted together with Richard Mitford, bishop of Salisbury from 1396–1407, who may also have played a role in the patronage of the manuscript or was perhaps included to emphasise Sherborne Abbey’s close relationship with the bishopric. 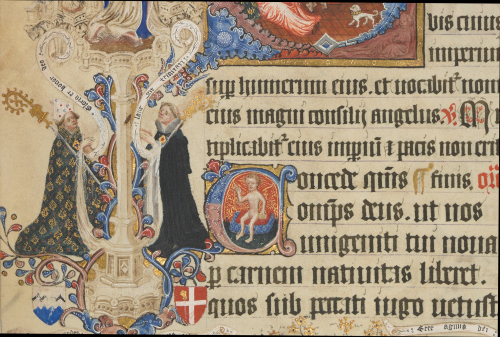 Portraits of Richard Mitford, bishop of Salisbury, with his personal arms, and Robert Brunyng, the abbot of Sherborne, with the arms of Sherborne Abbey, on the page for Christmas Day: Add MS 74236, p. 36 (detail)

The principal artist, a Dominican friar named John Siferwas, included his portrait and coat of arms several times in the manuscript. In one extraordinary instance, he depicted himself floating in the lower margin, his habit entwined around the branch of a rose bush which forms the lower border to the page, in the same way that angels are represented throughout the manuscript. Another of his surviving works is the Lovell Lectionary (Harley MS 7026), commissioned by John, Lord Lovell, for presentation to Salisbury Cathedral.

Self-portrait of John Siferwas, the artist of the manuscript, floating or kneeling in the lower margin, his habit entwined around the border of roses: Add MS 74236, p. 225 (detail)

The Sherborne Missal also provides portraits of the master scribe, John Whas, who was probably a monk of Sherborne Abbey. Whas recorded his name in several colophons, for example, emphasising the physical effort of scribal work: 'John Whas the monk has worked to write this book, and rose early, his body becoming much wasted in the process' (Librum scribendo Ion Whas monachus laborat, Et mane surgendo corpus multum macerabat, p. 661). 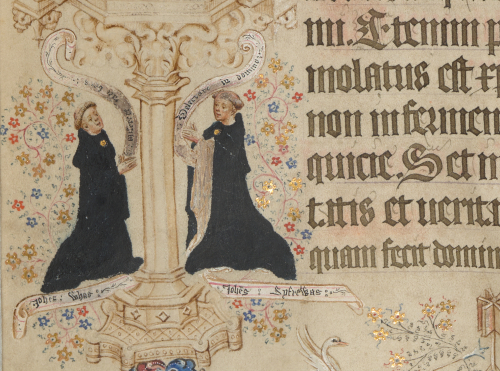 With decoration on nearly all of its 694 pages, the Sherborne Missal contains thousands of images. It is particularly famous for its series of 48 highly illusionistic depictions of British birds in the margins of the Ordinary and Canon of the Mass, most of them inscribed with their names in Middle English. These birds are unique in medieval manuscript illumination both for their ornithological accuracy and for the rich variety of species shown. 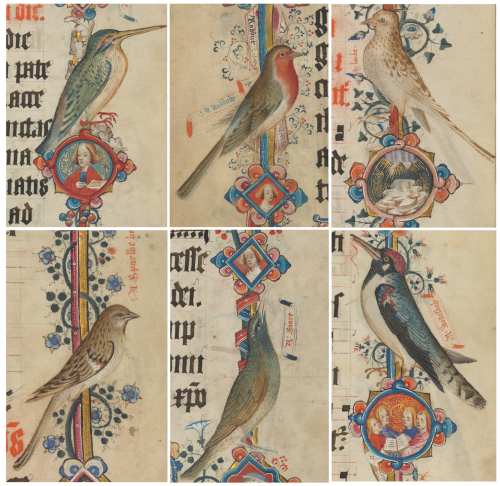 Local pride in Sherborne and its venerable history is a running theme throughout the manuscript. The Preface of the Mass features a series of portraits of 25 bishops of Sherborne from the creation of the diocese in 705 to the transfer of the bishopric to Salisbury in 1075. Clearly the Abbey was eager to emphasise its historic significance as the original site of the bishop’s seat.

There is also a series of roundels in the lower borders of the Ordinary and Canon of the Mass that contain portraits of historic benefactors of the Abbey. They hold charters recording their gifts, the large seals hanging down into the margins. 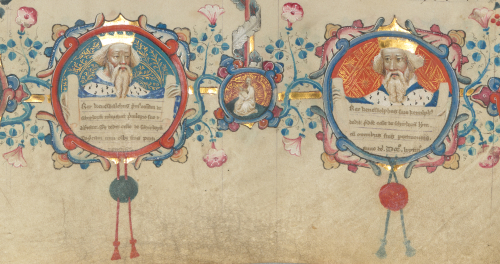 Benefactions of kings Cenwalh and Cynewulf, from the opening of the Canon of the Mass: Add MS 74236, p. 381 (detail)

Local Dorset saints are similarly prominent in the manuscript, such as St Juthwara, a pious virgin of the 6th century whose relics were housed at Sherborne Abbey. It is said that after being beheaded by her stepbrother, St Juthwara picked up her head and put it back on. 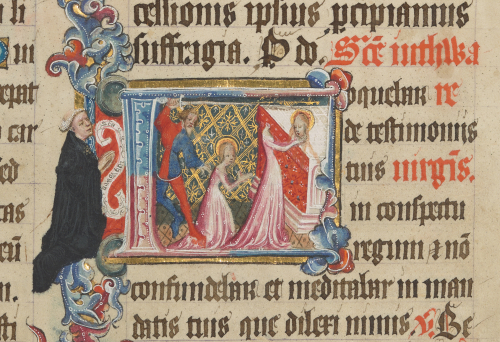 Select pages of the Sherborne Missal were previously published online as part of the Library's Turning the Pages project in 2002. We are now delighted to make the entire manuscript available to view through a pilot project on the Library’s Universal Viewer, a new viewer which offers a range of improved features. This pilot will be extended to include further collection items in due course.

The Sherborne Missal was purchased by the British Library in 1998 with generous support from the National Heritage Memorial Fund.