How did the Cotton library grow?

How, when and from whom did Sir Robert Cotton acquire his manuscripts? These are questions which, in some cases, remain unanswered. But there is a substantial body of material which provides clues to the growth of the Cotton collection. Some of that evidence can now be viewed online on the British Library's Digitised Manuscripts site.

A portait of Sir Robert Cotton attributed to Cornelius Janssen (1626)

One important resource for understanding the evolution of the Cotton library is supplied by the correspondence bound in Cotton MS Julius C III. This volume contains around 360 original letters addressed to Robert Cotton (1571–1631), dating from 1592 onwards. Many of these letters relate to the acquisition of manuscripts or to loans from the library; the correspondents read like a roll-call of the famous men of the day. Among them are the poet John Donne (d. 1631) — who thanked Cotton for lending him books during his imprisonment for his secret marriage — the playwright Ben Jonson (d. 1637), the historian William Camden (d. 1623), and the astrologer John Dee (d. 1609). Many of the letters were written in England, but we have also identified correspondence sent to Cotton in French, Italian, Hebrew and Greek, and from destinations in Europe (Amiens, Antwerp, Bremen, Cambrai, Delft, Douai, Dublin, Florence, Paris and Venice) and in northern Africa (Algiers and Tunis). If it was not already appreciated, here is indication that Cotton's manuscript-collecting and sphere of influence was international in its scope.

So what do the letters tell us? Much remains to be done in identifying the books to which they refer, but here is one well-known example. On 10 May 1630, Sir Edward Dering (d. 1644), lieutenant of Dover Castle, wrote to Robert Cotton as follows:

'I have sent up two of your books, which have much pleasured me: I have here the charter of K. John dated att Running Meade: by the first safe and sure messenger it is your’s. So are the Saxon charters, as fast as I can coppy them: but in the meane time I will close K. John in a boxe and send him.' 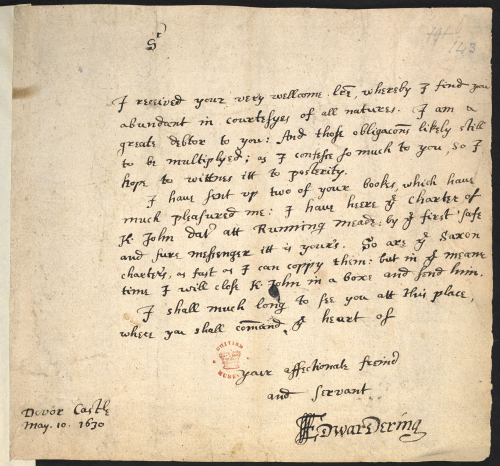 The charter of King John was none other than an original copy of the 1215 Magna Carta, which is now Cotton Ch XIII 31A (sadly, it was badly damaged by fire in 1731 and is now mostly illegible). We should note that Dering, one of the leading antiquarian scholars of the day, described himself as Cotton's ‘affectionate freind and servant’. Clearly, he considered the Cotton library as a suitable home for a document which now has such global appeal. 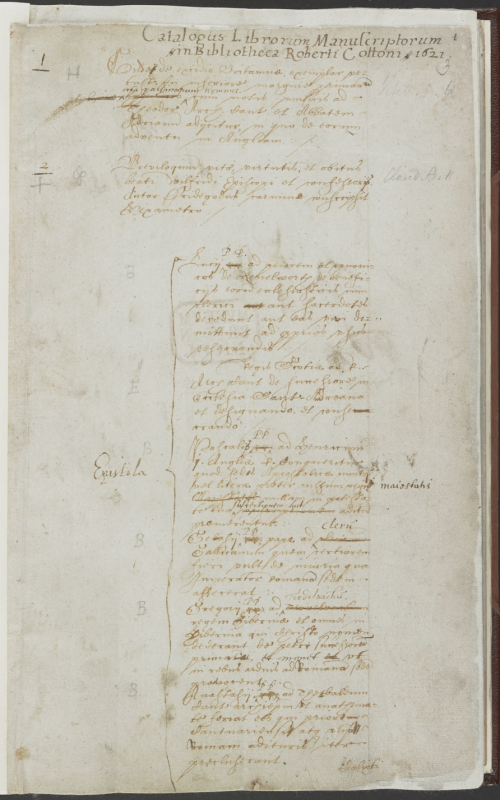 What other evidence can tell us when Sir Robert Cotton acquired his manuscripts? Important in this context is his first handwritten catalogue, Harley MS 6018, which has also been recently digitised. A significant amount of research into this catalogue was conducted by the late Colin Tite, and is published in his book The Early Records of Sir Robert Cotton's Library (London, 2003). The first portion of Harley MS 6018 (ff. 3r–146r) contains the catalogue of Cotton's manuscripts, dated 1621 but with subsequent additions; the heading and a number of later entries are in Robert Cotton's own hand. A further section of this volume (ff. 147r–151v, 152v–190r) contains notes on printed books and manuscripts that had been loaned to others by Sir Robert and his son, Sir Thomas Cotton (1594–1662), sometimes with confirmations of receipt, and dated between 1606 and 1653. Tite used this evidence to piece together who was consulting works in the Cotton library in the 17th century (his edition of the loan lists is found on pp. 31–73 of The Early Records). 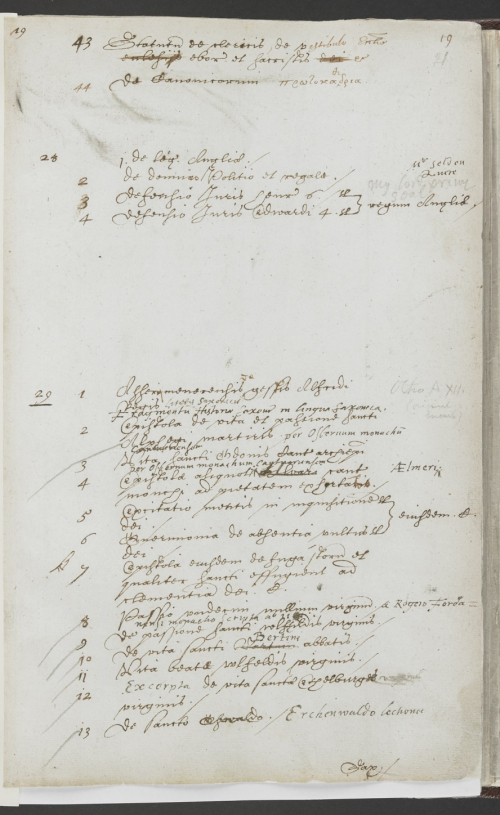 In time, we hope that Tite's work is built upon in order to establish further who was using the Cotton library, and which manuscripts were in circulation. Sir Robert Cotton had been one of the petitioners to Queen Elizabeth I in 1602, requesting permission to form an 'Academy for the study of Antiquity and History', which would establish a library containing 'ancient books and rare monuments of antiquity, which otherwise might perish' (Cotton MS Faustina E V, f. 89). The queen did not grant their request, but Cotton himself made much of his collection available to other scholars, to the extent that certain manuscripts were loaned and never returned, such as the Utrecht Psalter (Cotton MS Claudius C VII, now Utrecht, Universiteitsbiliothek, MS 32), or were not returned until after Robert's death in 1631, such as the Cotton Genesis (Cotton MS Otho B VI).

What is equally interesting is that this catalogue of the manuscripts was itself alienated from the Cotton library. It somehow made its way into the collection of Robert Harley (1661–1724), 1st earl of Oxford and Mortimer, and Edward Harley (1689–1741), the 2nd earl, and thence into the collections of the British Museum Library in 1753. This shows that the Harleys would have had good understanding of what the Cotton library once contained, and may have been able to instruct their own librarian, Humfrey Wanley (d. 1726), to track down any manuscripts that had gone missing. 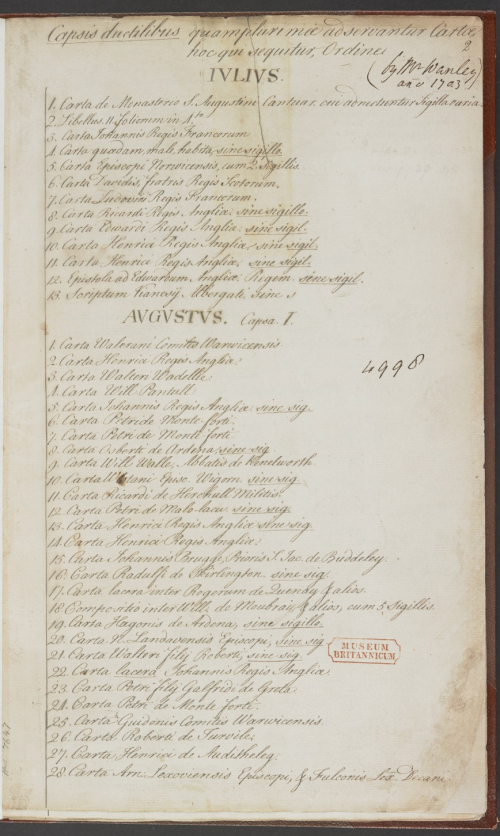 The name of Wanley is also significant for the third original resource for the Cotton collection that has now been digitised. This one is much less known, but has equally great potential for learning more about the contents of that library. It contains two catalogues of the Cotton charters, one in Latin made by Humfrey Wanley in 1703 (ff. 2r–12v), and the other in English made by Richard Widmore (d. 1764) sometime after 1750 (ff. 13r–52r). Although now classified as part of the Harley collection, Harley MS 7647, the volume in question was formerly known as Add MS 4998, and it is not listed in the printed catalogue of the Harley manuscripts (published in 1808). Colin Tite makes mention of it in The Early Records (p. 102), observing that Wanley's listing in this manuscript is near-identical to that recorded in his 1703 Report on the contents of the Cotton library, on the occasion of its passing into the hands of the nation. 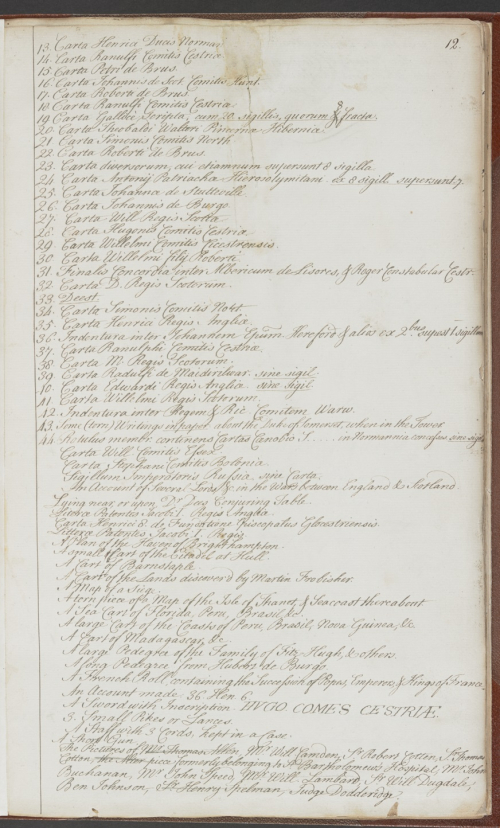 The final page from the catalogue of Cotton charters, for the Faustina press: Harley MS 7647, f. 12r

Unlike today, the Cotton charters as noted by Wanley are classified by emperors rather than arranged in numerical series. Wanley's ordering is as follows:

It will take some time, inevitably, to identify everything in Wanley's catalogue of the charters and other antiquities, many of which remain at the British Museum. By digitising this manuscript, along with Robert Cotton's own catalogue of his manuscripts and the correspondence addressed to him, we nonetheless hope to have made it easier to understand how the great Cotton collection developed.