Ludicrous figures in the margin

‘Hours of the Virgin, decorated with shields of arms, and ludicrous figures in the margin’, was the description of Harley MS 6563 provided in the 1808 catalogue of the Harley Collection. Our catalogue records have come on a long way since then, but the lively marginal antics in this little Book of Hours still stand out. Already popular with viewers on the Catalogue of Illuminated Manuscripts, they can now be appreciated in full on our Digitised Manuscripts site.

Harley MS 6563 was made around 1320-1330 in Southern England, perhaps London, probably for a woman owner. Originally the manuscript must have been extensively illuminated, but sadly all the pages containing decorated initials or miniatures were removed in the early modern period. Yet almost all of its remaining pages feature drawings from the topsy-turvy world of medieval marginalia. In honour of its digitisation, let’s dive down the parchment rabbit hole to explore some of its marginal subjects and their possible meanings.

While endlessly inventive, this kind of playful marginalia found in manuscripts of the 13th-14th centuries tended to draw on certain reccurring themes which were common to medieval art of other media such as stained-glass windows, wall paintings, misericords and stone carvings, as well as popular literature of the time. The meanings of these themes are much debated and there are no definite answers, but this uncertainty makes marginalia all the more fun to puzzle over.

One much-loved character who makes a prominent appearance in the margins of this Book of Hours is the crafty fox, trickster and master of disguise, who was well-known to medieval audiences from the Renard the Fox stories and other animal fables. Two double-page scenes in the manuscript show a fox preaching to a flock of birds. The fox leans on a pilgrim’s staff and gestures emphatically while the birds gaze on in gullible wonder. Later in the manuscript we see the conclusion of the tale: a fox running away with an unlucky member of the congregation in his jaws. 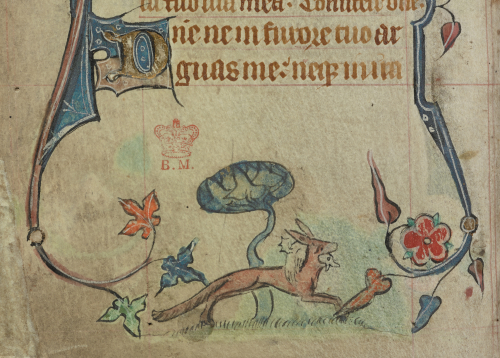 In another double-page scene the fox appears as a schoolmaster, birch and rod in hand, teaching a dog pupil who holds a book up to his face as though attempting to read. As with his preacher guise, the fox once again assumes a position of authority to misguide the ignorant and unwary.

Such scenes might be understood as social satires commenting on the corruption and folly of the human world. There may be a lesson to be learned here, as the Nun’s Priest concludes his retelling of a Renard the Fox story in Chaucer’s Canterbury Tales, ‘Taketh the moralite, goode men’ (take up the moral, good men)—although he is conveniently vague about what the moral actually is.

One particularly well-represented subject in this Book of Hours is animal musicians. A whole musical troupe of cats, pigs, dogs and rabbits is shown in concert over a series of five leaves in the Penitential Psalms, and others also appear throughout the manuscript.

The animal musicians probably belong to the popular theme in medieval marginalia of ‘the world turned upside down’. The idea that animals are unable to appreciate music was commonplace in the Middle Ages. A proverb inherited from classical antiquity via Boethius’ Consolation of Philosophy referred to someone who fails to understand something as ‘the ass which cannot hear the lyre’. Similarly, a Middle English poem listing impossibilities includes, ‘whan swyn be conyng in al poyntes of musyke’ (when swine are knowledgeable in all points of music), as we might say ‘when pigs might fly’. The animal musicians might therefore represent the impossible becoming reality. 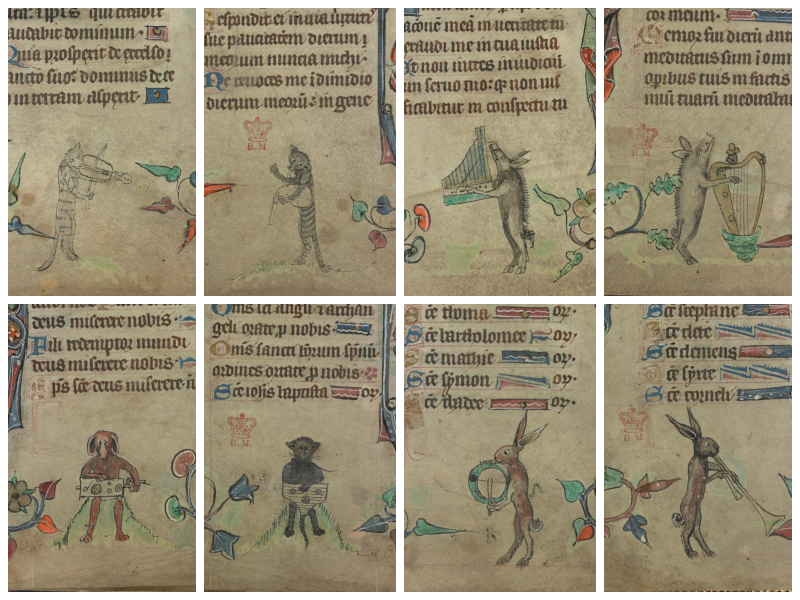 Another example of the inversion of reality is the ever-popular subject of figures fighting snails. In medieval marginalia, snails are notoriously hostile, as we see in this Book of Hours where a man attempts to fend off a large advancing snail with a club. On the following page, another man has cast down his sword and shield and begs for mercy before a ferocious mollusc.

But if anyone is able to triumph over such a formidable adversary, it is probably this naked woman warrior who is shown charging with a lance towards a snail. As part of the reversal of the social order in medieval margins, women, who were often expected to be subservient in medieval society, are sometimes shown as powerful militants and victors. Similarly, on another page a man surrenders to an armed woman.

Battle of the cats and mice

Role reversal is also the theme of the series of images for which this manuscript is best known: the battle of the cats and the mice. Over an eight-page narrative sequence, an epic war unfolds. First the mice besiege the cats’ castle, hurling rocks from a trebuchet and attempting to scale its walls. Then the cats attack the mouse castle, one firing a crossbow and another being crushed by a falling rock from the battlements. Next, a cat archer and a mouse lancer go head-to-head, and finally the mouse succeeds in impaling the unfortunate cat.

This triumph of the mice over the cats may also be understood as social commentary. In Boccaccio's Decameron, the artist and trickster Bruno paints a fresco of a battle of cats and mice in the house of the foolish doctor Simone. The doctor considers it a very fine piece, little knowing that Bruno and his friend Buffalmacco are actually swindling him. In the story, the cat’s defeat by the mice may reflect the wealthy doctor’s humiliation by the artists.

The idea of the hunted becoming the hunter also underlies the manuscript’s images of a rabbit huntsman, who in one instance takes aim at a very sorry-looking spotty dog. The same theme of killer rabbits taking revenge on the hounds is found in the margins of the Smithfield Decretals.

A rabbit hunter sets out with a full quiver of arrows and returns with his quarry: Harley MS 6563, f. 20r-v

The rich man and Lazarus

Yet there is also religious imagery with serious moral messages, such as scenes of the parable of the rich man and Lazarus the beggar from the Gospel of Luke (16:19–31). First we see three fashionably dressed diners at a feast shooing away a beggar on the facing page while dogs lick the sores on his legs. On the following pages, the rich man is shown on his deathbed accompanied by a devil, while the beggar is shown dying outdoors with an angel at his side.

This parable is also an instance of role reversal in that the rich man suffers torments in death, whereas the beggar is received into comfort, yet here the message is clearly sincere. That at least one of the manuscript’s owners found it disturbingly real is suggested by the way in which they attempted to rub out the figures of the devil and angel.

To us it may seem strange to place scenes of cartoon violence alongside religious imagery with such urgent moral messages. But for medieval audiences, perhaps this was all part of a visual culture in which the sacred and profane, the entertaining and didactic, and the ludicrous and meaningful were more intricately intertwined than today.