With the return of the Great British Bake Off to our screens, it’s the perfect time to crack out the baking skills! We’ve explored before how baking skills were highly valued in the Middle Ages, so this time we thought we’d put some medieval recipes to the test. Using authentic recipes from manuscripts held in the Library, amateur bakers from the BLMedieval team are battling it out to be crowned the Medieval Bake Off Champion. Who will triumph?

On your marks, get set, bake!

Take and make a crust in a dish and take curds and wring out the whey and draw them through a strainer and put in the crust. Add a third part of sugar and some egg whites and shake in elderflowers and bake it up with rose water and serve it up.

Named after the Latin for the common elder tree (sambucus nigra), sambocade is a curd tart flavoured with elderflowers. I mixed 550g curd cheese (I used a Polish variety called twaróg) with 1/3 of a cup of unrefined demerara sugar, 3 egg whites, the flowers from 5 heads of fresh elderflowers (picked when they were in season in May), and a dash of rosewater. I also departed from the recipe by adding a dash of elderflower cordial. I made a shortcrust pastry shell in a 9-inch tart dish, blind-baked it at 160° for 10 minutes in a fan oven, then added the filling and baked it for about 50 minutes. By then, the tart was golden on top and the filling had set to a springy consistency which rippled satisfyingly when I tapped it with the back of a spoon.

I 'messed it forth' and was surprised to find that the filling tastes powerfully floral, with the elderflower and rose combining into a glorious bouquet of flavour. The curd is rich and slightly tangy with a crumbly and juicy texture, contrasting with the crisp pastry. It reminds me of Yorkshire curd tarts, fragrant hedgerows and long summer days in the countryside. 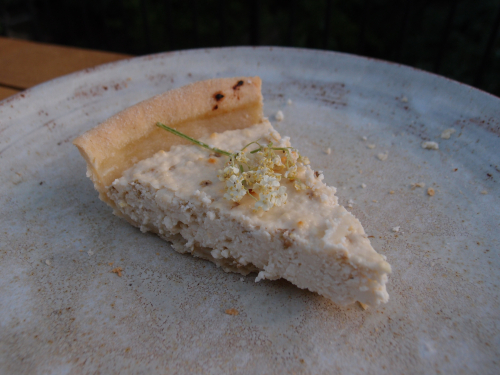 A slice of sambocade, photo by Eleanor Jackson

Take figs and raisins, pick them clean, scald them in wine, and grind them small. Add sugar to the same wine and mix them together. Push it [the wine] through a strainer and mix your fruit with it. Take pears and apples, peel them, take the best pieces and grind them small. Set a pot with oil on the fire and put everything in it, stir it, and prevent it from burning. When it is mixed, add ginger powder, cinnamon, galingale, whole cloves, and whole nutmeg seeds. Add pine nuts briefly fried in oil and salt. When it is fried, take it out and put it in a vessel and let it cool. When it is cold, cut out with a knife small pieces that are the size of your little finger. Roll the pieces in good pastry, fry them hard in oil, and serve them forth.

Comadre is a pastry filling that, as its possible Latin source comedere (to devour) suggests, is gobble-worthy indeed. After cutting up and boiling about half a kilo of figs and raisins in red wine with a few teaspoons of sugar, I mashed the figs and raisins up with peeled and cored apples and pears (5 of each). I left the fruit mixture to simmer in an open pan for about 20 minutes while stirring and adding the required spices —using galangal paste for ‘galinga’— and fried and salted pine nuts to my own liking. After leaving the filling in the fridge for a couple of hours, I took finger-sized portions and wrapped them in dairy-free pastry dough. Instead of frying the pastries in oil, I baked them in the oven for about 15 minutes at 220°C. Rich in flavour and with a long and refreshing aftertaste, comadre, also known as ‘comedie’, put a smile to my face. 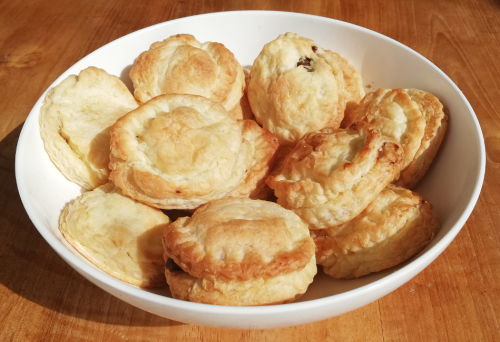 A bowl of comadre, photo by Clarck Drieshen 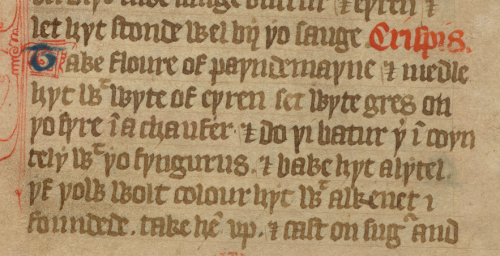 Take flour of pandemain (a fine white bread) and mix it with egg white. Put white grease (fat or lard) in a pan and add the batter carefully with your fingers and bake it a little. If you wish, colour it with alkenet (a herb used as a red colorant). Take them out, sprinkle with sugar and serve it up.

The recipe for crispis (the Middle English word for ‘curly’ or ‘wrinkled’) from the Forme of Cury is one of the simplest in the collection, only requiring a few ingredients to make. Perhaps this is the reason why versions of the dish are common to almost all major recipe collections that survive from the late medieval period. The recipe appears to describe a type of battered fritter – a cross between a pancake and doughnut, but without a filling.

For my interpretation of the recipe, I whisked three egg whites together with a small amount of water and about two tablespoons of honey. Then I took 50g of plain flour, made a well in the top and folded in the wet ingredients to create the batter. The mixture fell apart rather quickly when I added it to the oil, so I incorporated more flour to thicken. The batter eventually came together and gained a smooth consistency. I dropped a tablespoon of the mix into a pan of oil about 2 inches deep and fried it on a medium heat, flipping it over so that both sides would colour equally. The cooking time was short, no more than 3 minutes. The edges of the fritters crimped as they puffed up, so that they resembled a kind of Yorkshire pudding. I topped the finished plate of crispis with a few dollops of honey and a thick dusting of icing sugar. The result was a delicious bite-size snack with a soft crumb and a light texture that was not overly sweet, but dangerously moreish! 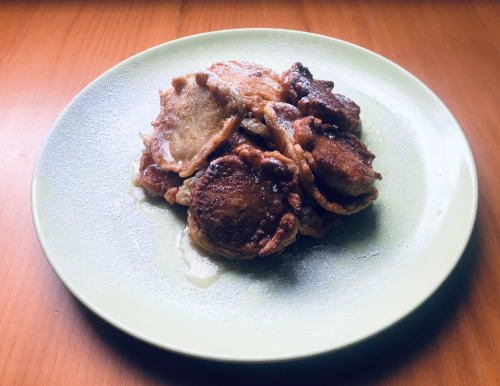 A plate of crispis, photo by Calum Cockburn

In the absence of Paul and Prue, we asked the public to decide who will be the winner of Great Medieval Bake Off. Voting via our online poll has now closed and we can confirm that the winner is Ellie with her delicious sambocade! Her prize: a medieval handshake and a copy of the Library's renowned unicorn cookbook. Thanks to all who took part!

And if this blogpost has whetted your appetite, take a look at the delicious line-up of digital events celebrating, exploring and debating food as part of the British Library’s food season (14 September-20 October 2020).

***disclaimer: these recipes were made in the authors' own time and at their own expense. No Library resources were used in the making of these medieval treats! ***