Angels pop up all over the place in medieval manuscripts, from Books of Hours to handbooks on magic. They are key players in Old and New Testament stories and feature in decorative borders. Join us for a tour of some of the wonderful images of angels in British Library manuscripts and the many varied contexts in which they appear.

An illustrated treatise by Francesc Eiximenis discusses the properties of angels, for instance ‘How an angelic spirit has no body and yet it can take on corporeal form by entering a body’ and the characteristics of good and bad angels. Each man and woman must choose between the angels’ path of goodness and the evil ways of the devil, as shown in this miniature below. 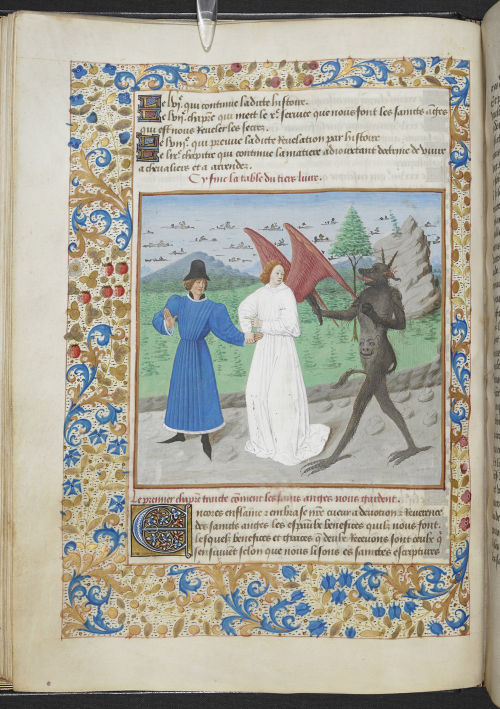 A guardian angel guides a man away from the devil, in the Livre des anges, a French translation of Francesc Eiximenis, Llibre dels Àngels: Sloane MS 3049, f. 27r

The Breviari d’Amour, an encyclopaedic work in the Catalan language with the emphasis on theological and courtly traditions, contains a section on the offices or tasks of angels, which include seeing off the devil, interceding with Christ for humanity and carrying souls to Heaven. 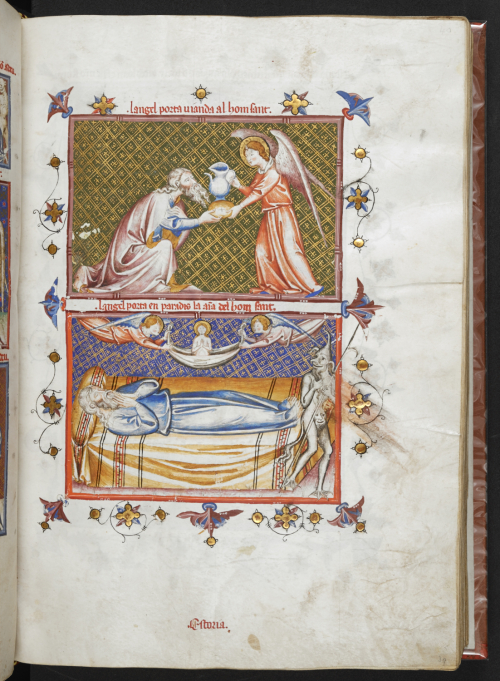 An angel brings food and a jug of wine to Ezekiel (above), and two angels carry the soul of a dying man to heaven while a devil retreats (below), Matfré Ermengau of Béziers's Breviari d'Amour: Yates Thompson MS 31, f. 40r

Angels in the Old Testament

Angels play a leading role in some of the best-known stories in both the Old and New Testaments. In Genesis, when Adam and Eve are banished from Paradise for eating the forbidden fruit, an angel with a flaming sword bars the gate to the garden and they are forced out into the world where they have to work hard for their livelihood. 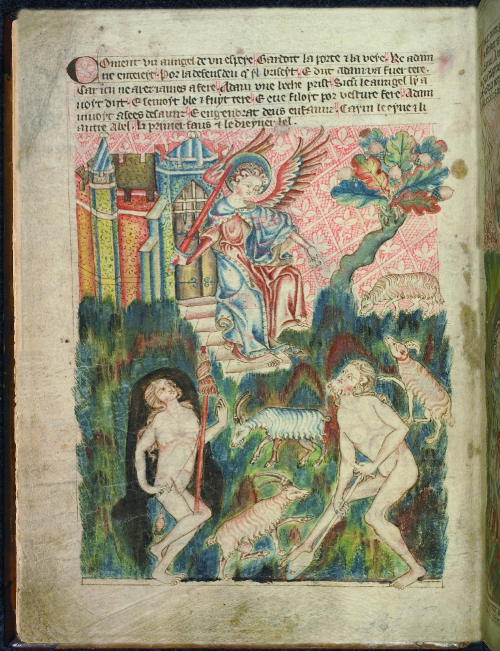 In the Old Testament story of Jacob, grandson of Abraham, he has a vision of a ladder reaching to heaven with angels climbing up and down, and he hears God’s voice blessing him from above. In his old age, returning home to the land of Canaan after a long exile, he wrestles with an angel all night, remaining unbeaten, and receives a blessing, being given the name ‘Israel’. These two episodes are illustrated as part of a prefatory set of images from the Bible in the Omne Bonum, an alphabetical encyclopedia of general knowledge written by James le Palmer, Clerk of the Exchequer in c. 1360. 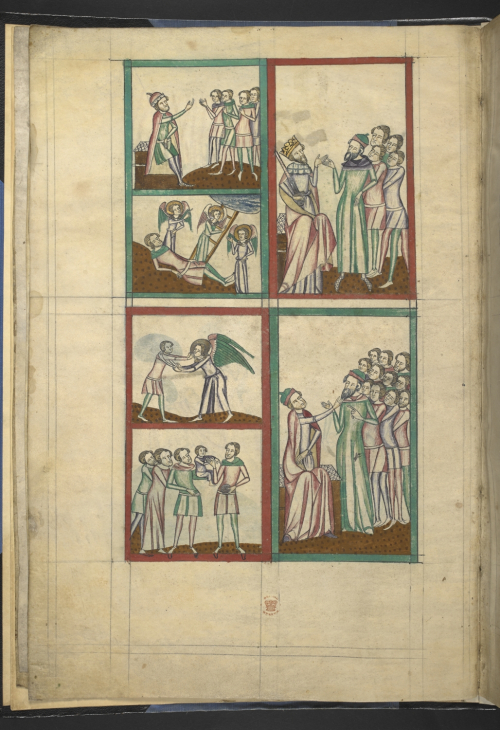 Angels and the Birth of Christ

The Feast of the Annunciation is one of the most important in the medieval church calendar. Pictures of the Angel Gabriel appearing to the Virgin Mary to announce that she will give birth to Christ are found in Books of Hours, Missals, Psalters and Bibles. A search using the term ‘Annunciation’ in the ‘Image description’ field of our Catalogue of Illuminated Manuscripts produces 166 results, one of the earliest being the Echternach Gospels from the mid-11th century, where a full-page illumination of this scene precedes the Gospel of Matthew. 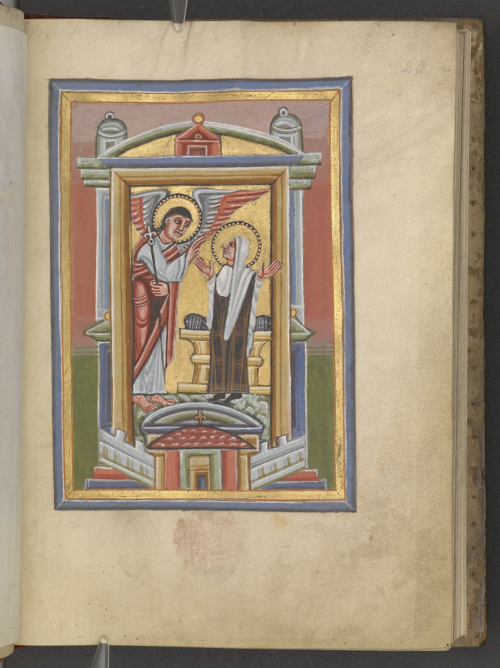 The Angel Gabriel appears to Mary at the Annunciation, the Echternach Gospels: Egerton MS 608, f. 20r

Angels sometimes appear in scenes of the Nativity, including this charming depiction of a helpful angel preparing a bath for the newborn Christ in the stable, while the baby plays with the donkey, Mary rests, and Joseph looks on with his arms crossed. This is just one example of how useful angels can be to have around. 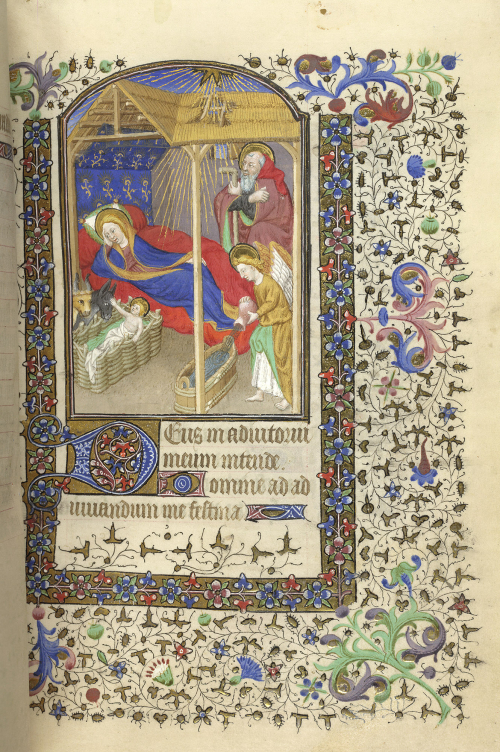 The Nativity, at the beginning of the prayers for the hour of Prime in the Hours of the Virgin: Sloane MS 2468, f. 51r

Angels play a key role as the agents of God’s plan for the end of the world in Revelation, the last book of the New Testament. They guide John in his vision and bring about disasters on earth: seven angels are given seven trumpets to blow, causing a series of cataclysmic events, and later, seven angels use seven censers to pour out plagues on earth. 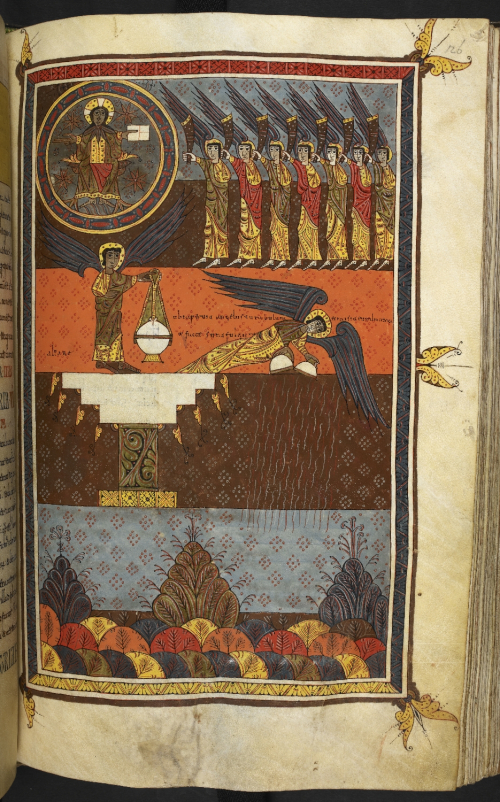 In Revelation, a war takes place in heaven between the forces of good, led by the archangel Michael and the evil followers of the dragon, or the devil. The Tiberius Psalter from mid-11th century Winchester contains a colour outline drawing of St Michael defeating the dragon, as part of a series of scenes from the Bible. 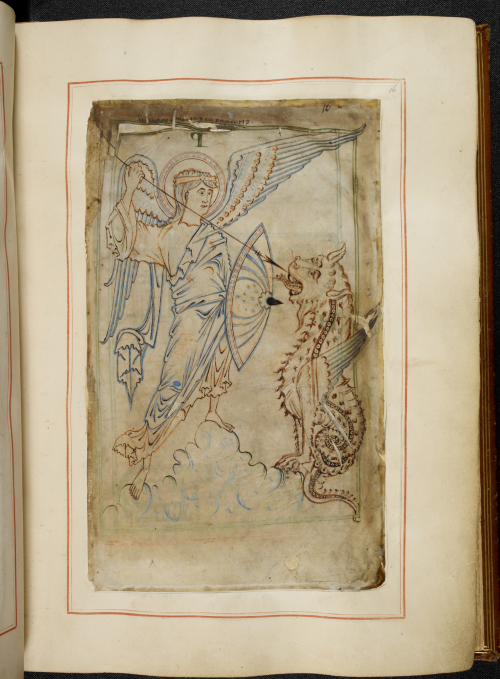 Two of the leading English saints, Cuthbert and Guthlac, were visited by angels, as shown in their illustrated hagiographies. According to the Venerable Bede’s account of his life, St Cuthbert, who became bishop of Lindisfarne, was visited in his youth by an angel disguised as a weary traveller. In this scene, Cuthbert has seated the traveller at his table and is washing his feet, showing Christ-like humility. Here the artist has cleverly dressed the figure in the hooded cloak of a traveller or pilgrim, but has included angels’ wings to show his true nature. 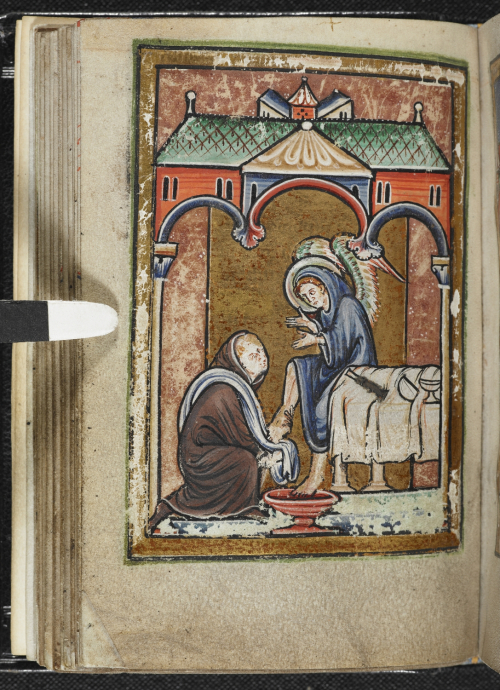 Cuthbert washes the feet of an angel in disguise, from Chapter 7 of Bede's prose Life of St Cuthbert: Yates Thompson MS 26, f. 17v

The life of Guthlac, the Mercian hermit-saint, is told in a series of roundels on a parchment roll produced in Lincolnshire in c. 1200. He builds a cell on the island of Crowland, where he is visited by an angel and St Bartholemew. 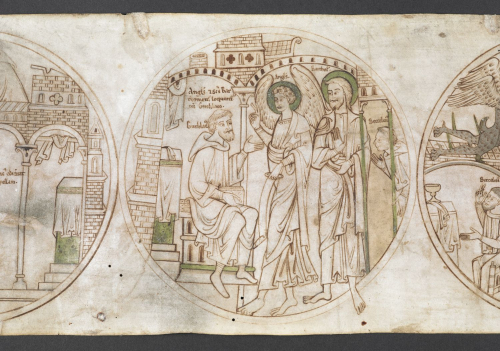 As Revelation shows, not all angels are benign. In the Divine Comedy, when Dante reaches paradise with Beatrice, they see the Archangels Michael and Raphael battling the bad angels (who fell from grace with Lucifer) and casting them into hell.

Beliefs about angels were not always sanctioned by the Church as they could sometimes cross over into the occult. A book of magic from the 16th century known as the Sworn Book of Honorius has a section on how to summon heavenly intermediaries so that they will impart knowledge of all things to the user. Both good and bad angels are pictured and named on this page. The images themselves were believed to have magical properties. Good and bad, useful and militant, it's clear that angels hold an important place in medieval illumination. Explore more amazing images on our Catalogue of Illuminated Manuscripts and Digitised Manuscripts sites.