Regular readers of this blog are likely familiar with splendid examples of ‘Insular’ art — the art of the islands of Britain and Ireland from the 7th to 9th centuries. The iconic Lindisfarne Gospels is one of the most well-known, but you can also admire several examples on the webspace for the recent Anglo-Saxon Kingdoms exhibition. 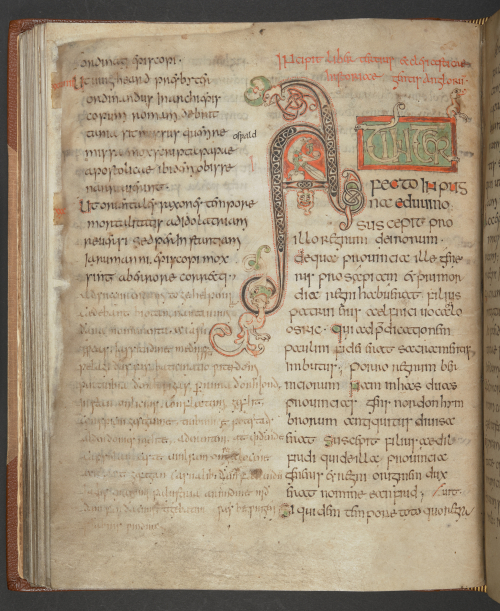 As is clear from this initial from the Tiberius Bede, one of the main decorative elements of Insular art is the incorporation of delicately drawn interlacing knotwork designs. The inside of the letter is decorated with interlacing ribbons on a black ink background. The tongue of the beast’s head at the top of the letter also interweaves with itself. Patterns like this are still closely associated with Irish, Scottish, and Welsh cultural identity, often called ‘Celtic knotwork’.

Intricate interlace designs are also an important element of the style of manuscript art known as ‘Franco-Saxon’. ‘Franco’ refers to Francia (the kingdom of the Franks), where this style originated. The ‘Saxon’ part of the term refers to the incorporation of Insular decorative motifs (when this term was coined in the late 19th century Insular art was often called ‘Hiberno-Saxon’). In general, the Franco-Saxon style is characterised by a fusion of motifs based on Insular models and features of layout, decoration, and script of the Carolingian manuscript tradition. The Carolingian dynasty seized control over the area roughly corresponding to modern-day France from 751, expanded the kingdom, and ruled (intermittently) until 987.

Interlace is usually described as one of the most defining Insular components of the Franco-Saxon style. Interlace decoration has also been seen as evidence of the spread of this style to the scriptorium of Saint-Martin of Tours during the second half of the 9th century. The Benedictine abbey of Saint-Martin of Tours was one of the most influential centres of manuscript production in the Carolingian empire in the early decades of the century. However, in 853 Tours was attacked by one of the Norse war bands who carried out raids along the rivers of France. To help restore the Abbey’s destroyed library, books from other Carolingian centres were sent to the monks of Tours. We know that at least one of those manuscripts was a Franco-Saxon manuscript from Saint-Amand, one of the main centres of the Franco-Saxon style. 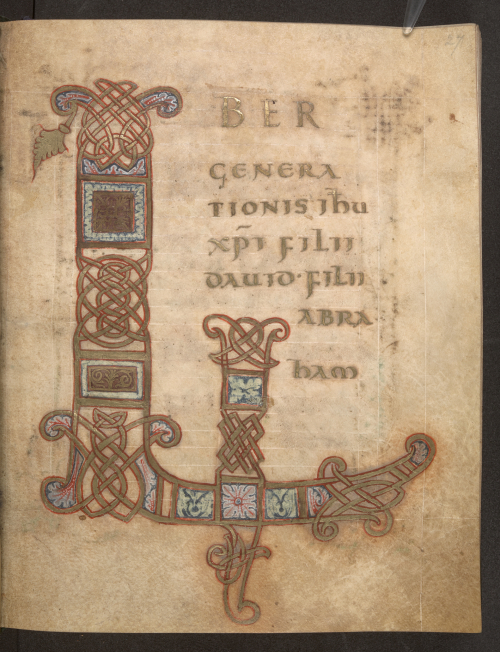 Consequently, the decoration in manuscripts made at Tours in the decades after the attack of 853 has been described as incorporating the Franco-Saxon style into the diverse and well-developed Tours style. This Gospel book from Tours, digitised as part of the Polonsky project (Add MS 11849), is one example of this. The golden ribbons that both form the outline of the ligature ‘LI’ (Liber) (book) as well as interlaced designs within the letter and at their terminals, have been compared to decorated initials in well-known Franco-Saxon manuscripts.

But there is a problem with using the presence of interlace as a distinguishing feature of an early medieval style. When you start to look at early medieval manuscripts from across northern Europe, you quickly notice that interlacing knotwork decoration is an omnipresent decorative element. 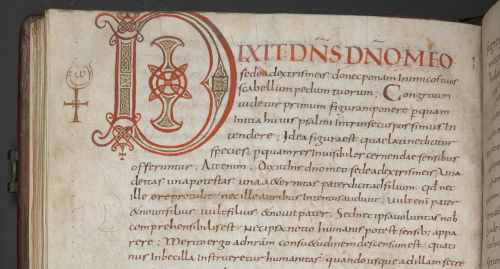 For example, in the area that is now Belgium and the Southern Netherlands, interlace in a slightly different variant was also common during this period. Here it is incorporated within the stem of the initial ‘D’ as well as in a design within the letter, in red and brown ink. 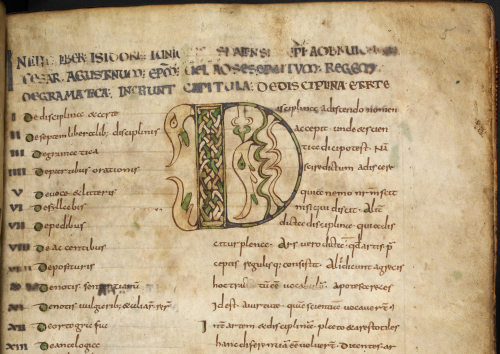 Similarly, interlace is also present in contemporary manuscripts that were most likely made in Brittany, which was never incorporated fully into the Carolingian empire. Perhaps that is why manuscript art from this area often continued to resemble Frankish manuscripts created before the spread of Carolingian influence (i.e. before c. 750). 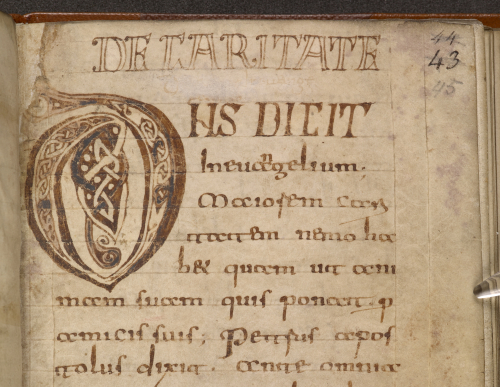 Further south, in Northern Italy, early medieval manuscripts also feature interlace in their decorated initials. This is apparent in a late 8th-early 9th manuscript (now Cotton MS Nero A II), which has a large initial ‘D’, with its ascender swooping to the left. The letter incorporates knotwork patterns within its rounded bowl, while another interlace design of thicker ribbons continues and reaches inside the bowl.

Insular artists, responsible for creations like the Lindisfarne Gospels, undeniably mastered the basic principles of interlacing knotwork and created incredibly intricate and imaginative designs. As a type of pattern in itself, however, it was such a ubiquitous feature of early medieval European art that its presence in a manuscript does not necessarily indicate specifically Insular influence.