The Bamberg Book of Relics

The Bamberg Book of Relics (Add MS 15689) represents the medieval treasure trove of Bamberg Cathedral. It contains more than 100 illustrations of highly decorated containers with the physical remains of holy men and women, fragments of the sites they visited, and the objects they touched. The relics and their containers (reliquaries) are organised by shape, and include banners, vestments, vessels (monstrances), busts, caskets and crosses. Among the most prized relics are those associated with the life of Christ, such as hair of the Virgin Mary, pieces of the Holy Cross, one of the nails from the Crucifixion, and incense that the Three Magi presented to the infant Christ. 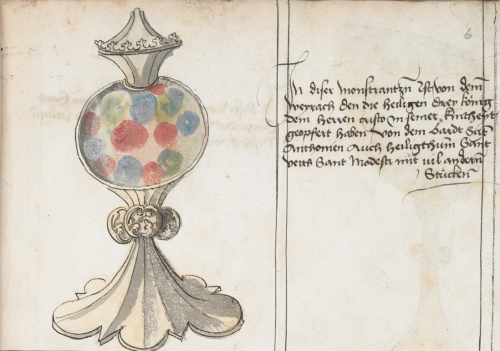 Prominent in this manuscript are the relics of the Holy Roman Emperor Henry II (973–1024) and his wife Cunigunde of Luxembourg (975–1040). Henry, the last monarch of the Ottonian dynasty, and Cunigunde, a descendant of Charlemagne, were strongly connected to Bamberg. Upon their marriage, Henry gave Cunigunde his land in Bamberg as a wedding gift. In 1002, he founded Bamberg Cathedral, which was consecrated on his birthday in 1012, and in 1007 he established the new bishopric of Bamberg. As founders and patrons, Henry and Cunigunde were buried inside Bamberg Cathedral. Their shared tomb, made by the famous German sculptor Tilman Riemenschnieder (c. 1460–1531), can still be seen today.

Henry and Cunigunde were canonised in 1146 and 1200 respectively, which makes them the only saintly imperial couple in history. Among their relics are Henry’s banner that he took with him in his various wars; according to this manuscript, he was carrying it with him when St Lawrence, St Adrian and St George appeared to aid him in battle.

The manuscript testifies to the veneration of Henry and Cunigunde's garments. A blue mantle may represent Henry's Star Mantle (‘Sternenmantel’), which features astrological signs and images of Christ, saints, and the symbols of the four Evangelists, in gold embroidery. Henry or Cunigunde donated the mantle to Bamberg Cathedral where it is kept today in the Diocesan Museum, making it the oldest surviving European cope. Another blue mantle seems to represent the Cope of Cunigunde, which features gold-embroidered scenes relating to the life of Christ and the martyrdoms of St Peter and St Paul, the patron saints of Bamberg Cathedral. These are also the main subjects of Cunigunde’s Great Mantle, another important garment that is perhaps depicted below the Cope. 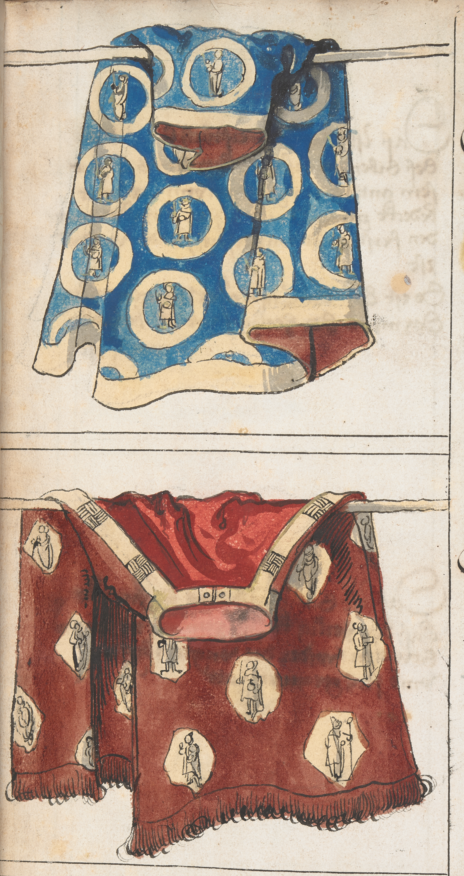 Other relics that are associated with Henry and Cunigunde concern contact relics — objects they touched during their lives — and physical remains. An example of the first category is the sword of St Adrian, an early Christian military officer and martyr, and which was used by Henry to fight ‘unbelievers’ (‘unglaubigen’). 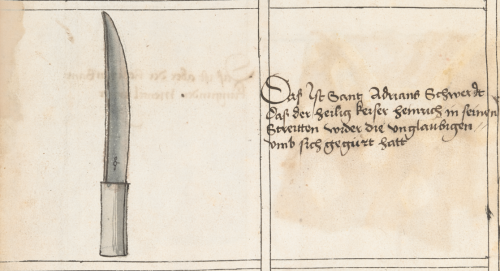 Another contact relic is Cunigunde’s glove, still featuring her wedding ring. According to medieval legend, she once dropped it while praying in Bamberg Cathedral, but it was miraculously caught and returned to her by a ray of sunlight. 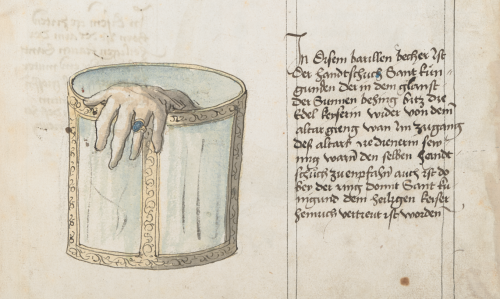 Several of the reliquaries contained physical remnants of the imperial couple, including monstrances with fragments of Henry’s lower jaw and throat, and a crystal jug with a lock of Cunigunde’s hair. 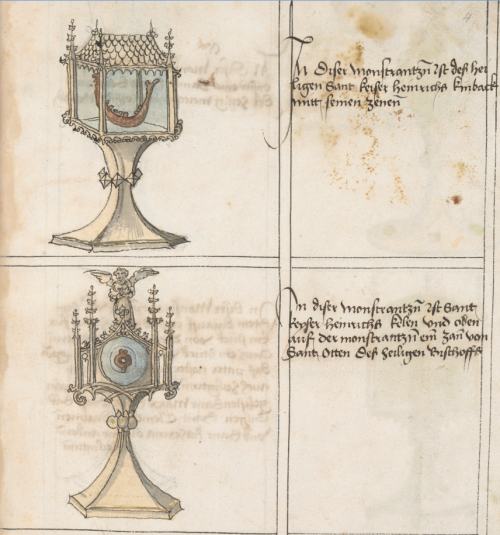 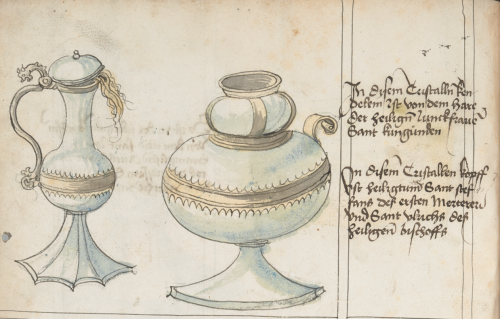 Since the 14th century, Bamberg Cathedral has presented its relics in public. The Book of Relics was used for announcing the various objects as they were displayed, sometimes from an elevated location, to Bamberg’s citizens. Like the cathedral’s relics of Christ and the Virgin Mary, those of Henry and Cunigunde were given an important sacred status, with the citizens believing that they could gain absolution of sin by beholding them. 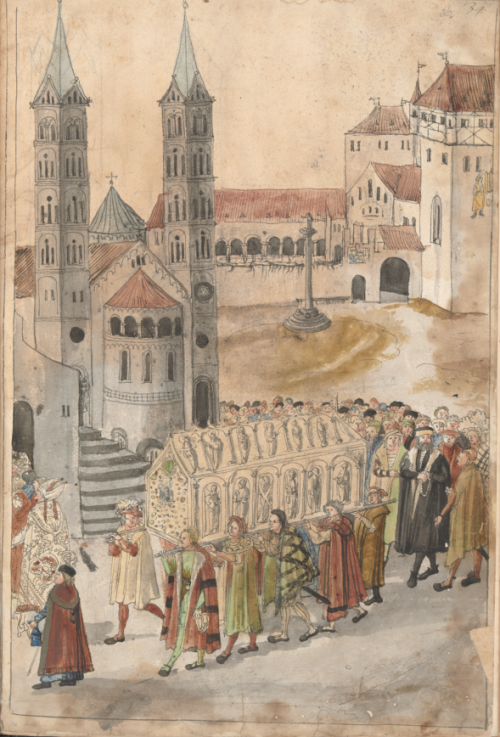 You can now follow in this medieval tradition by seeing some of the most splendid relics from the Bamberg Book of Relics on display at Bamberg Cathedral. The Diocesan Museum is currently showing the manuscript in an exhibition on the imperial garments, that runs until 1 November 2020.