The First History of Elizabethan England: The Making of William Camden’s Annals

The British Library is pleased to invite applications for an AHRC Collaborative Doctoral Award (CDA) PhD studentship, on the making of William Camden's Annals. The studentship will start in the academic year 2021/22 and is funded through the Open-Oxford-Cambridge AHRC Doctoral Training Partnership.

The successful applicant will be based at the University of Oxford, and will be supervised jointly by Dr Alexandra Gajda (Oxford), Dr Neil Younger (Open University) and Julian Harrison (The British Library). This doctoral project will be the first comprehensive study of the making of William Camden’s Annals, one of the most valuable sources on early modern Britain and the reign of Queen Elizabeth I. For more details, please see the advert on the Open-Oxford-Cambridge Doctoral Training Partnership website. 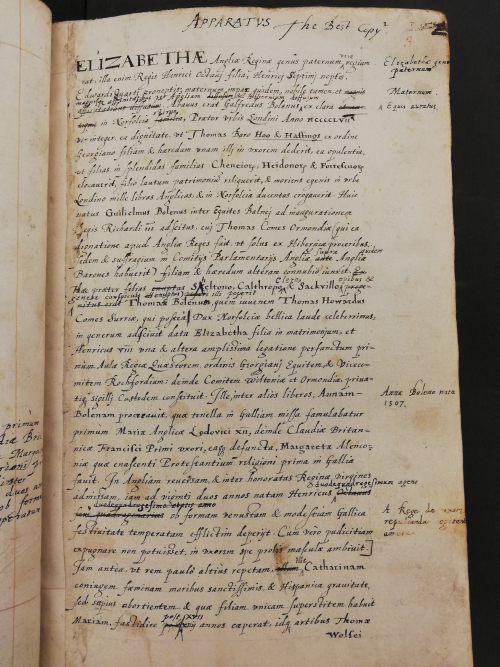 The thesis will focus initially on the drafts of Camden's Annals held in the Cotton collection here at the British Library. William Camden (d. 1623) had taught Robert Cotton (d. 1631) at Westminster School. They shared the same antiquarian interests, and Camden bequeathed his own manuscripts to Cotton, including the earliest full-scale history of Elizabeth I's reign, known as his Annales Rerum Anglicarum et Hibernicarum Regnante Elizabetha (abbreviated commonly to Camden's Annals). The Cotton library is now recognised as one of the most important collections in Britain, and was entered on the UNESCO Memory of the World UK Register in 2018.

The award holder will carry out a thorough study of the manuscripts, with the intent of producing an assessment of the authorship of the Annals, looking at the drafting process and identifying the scribes involved and the corrections and additions made in other hands. The project will open up many avenues of research into the intellectual and political culture of the 16th century, including antiquarian and historical study, and the formation of the Cotton collection.

The student will be based at the British Library for a significant proportion of the studentship, where they will have a dedicated workspace, access to office equipment and services, and privileged staff-level access to the manuscripts collections, learning more about curatorial activities and the wider collection. The Library is actively involved in a range of collaborative doctoral research programmes across several disciplines and provides a broad range of professional development opportunities for doctoral students.

Applicants should have knowledge of Latin to A Level or above. Knowledge of early modern palaeography and history is desirable but not essential. Potential applicants are encouraged to contact Dr Alexandra Gajda with questions and for any guidance before submitting their application.

The deadline for applications is 12:00 (midday) on 8 January 2021. Please refer to the advert here for full details of how to apply.