Lewis of Caerleon manuscript saved for the nation

In August 1485, as the Battle of Bosworth raged and King Richard III was toppled from the throne of England, an astronomer lay imprisoned at the Tower of London. Lewis of Caerleon, the personal physician to Elizabeth Woodville (wife of King Edward IV) and Lady Margaret Beaufort (mother of King Henry VII), had incurred Richard's wrath by his loyalty to the Tudor cause. Lewis owed his life ultimately to Henry's victory at Bosworth, enabling him to continue his study of eclipses, equinoxes and other astronomical observations. Following the intervention of the Culture Secretary, on the recommendation of the Reviewing Committee on the Export of Works of Art and Objects of Cultural Interest, the most significant manuscript of the works of Lewis of Caerleon has recently been acquired by the British Library. Made in the 1480s–90s, and possibly begun while Lewis was held at the Tower, this manuscript has been in private hands for the last 500 years. It contains the most complete collection of his works, including texts that are unattested elsewhere, and is a lavish presentation copy, presumably designed as a gift for an important patron or institution. The manuscript retains its original binding, in near-pristine condition, and contains an unparalleled series of astronomical tables. Its acquisition will allow scholars of medieval astronomy and science — many of whose predecessors were unaware of the manuscript's existence — to identify Lewis's sources, to verify his calculations, and to gain new insight into the significance of his research. The contemporary, blind-stamped binding of the manuscript: Add MS 89442

Lewis of Caerleon (d. in or after 1495) was born in Wales, before studying medicine at the University of Cambridge and possibly also at Oxford. It has long been recognised that he bridged the gap between medieval Oxford astronomers, such as Simon Bredon (d. 1372) and Richard Wallingford (d. 1336), both fellows of Merton College, and his early modern English successors. It is equally notable that Lewis of Caerleon drew upon the work of Arabic astronomers such as Al-Battānī (d. 929), Jabir ibn Aflah (d. c. 1160), and Abū Ishāq Ibrāhīm al-Zarqālī (d. 1087), all of whom are named in this compilation (‘Albategni’, ‘Geber’, ‘Arzachel’). But Lewis did not merely copy the works of previous astronomers, since he actively improved and expanded upon their observations using his own calculations. 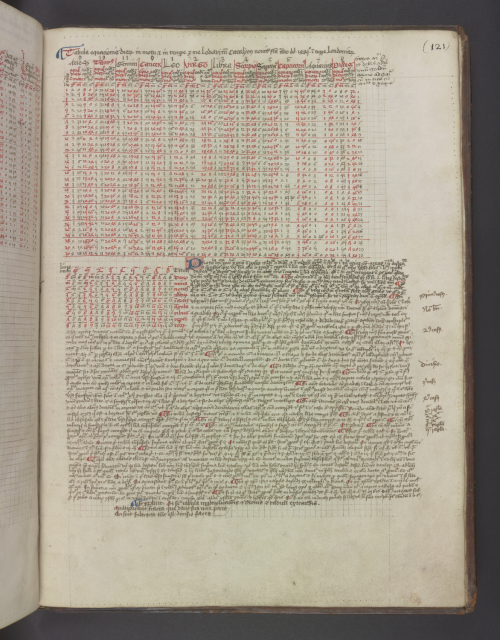 Now that this manuscript is publicly accessible online, we anticipate that more will be discovered about the circumstances of its manufacture and its early ownership. There are indications that it was made under Lewis's own supervision, since there are numerous self-references (‘per me Lodowycum’) and annotations throughout the manuscript, while his signature (‘Lewys’) is found in many places. The first recorded owner was the historian and antiquary Sir Henry Spelman (d. 1641), who bought the manuscript on 11 April 1606. It then passed by descent through his family, until being listed as lot 3 in the sale catalogue of Spelman's library by the London bookseller John Harding, auctioned on 28 November 1709. Our manuscript next appears in the sale of the library of Walter Clavell (d. by 1740), before ending up in the library of the Earls of Macclesfield at Shirburn Castle, Oxfordshire. There it remained until the manuscripts of the 9th Earl of Macclesfield were auctioned, with some exceptions including the present volume, at Sotheby’s, London, in 2004–05. 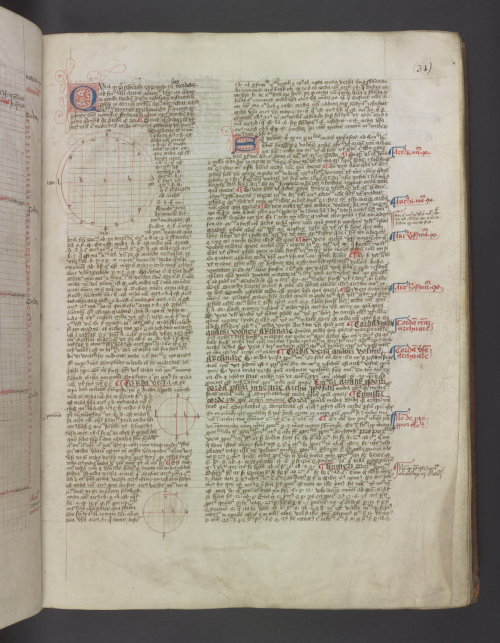 More recently, after leaving the Macclesfield collection, this manuscript had been sold to an overseas purchaser. After the Culture Secretary's intervention, its export was deferred temporarily to allow a UK-based institution to raise the matching funds to buy it. This was especially challenging due to the difficult circumstances brought about by Covid-19, but the British Library was finally able to raise the funds to purchase this manuscript in August 2020. We are extremely grateful to the following for generously supporting the acquisition of this manuscript: the Shaw Fund, the T. S. Blakeney Fund, the Bernard H. Breslauer Fund of the American Trust for the British Library, the British Library Collections Trust, the Friends of the National Libraries, and those who wish to remain anonymous. 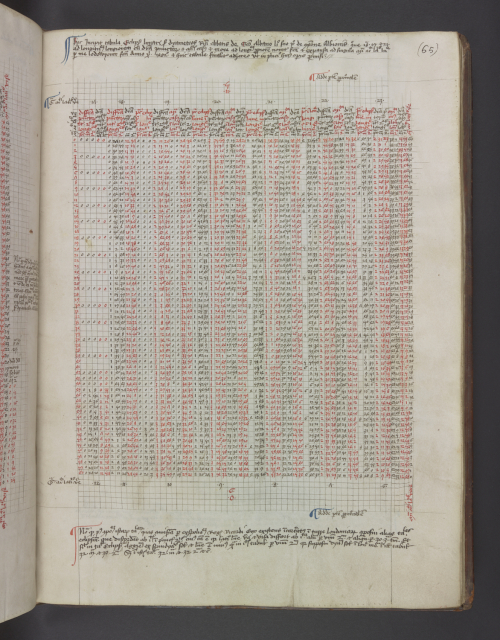 An eclipse table attributed to Richard Wallingford and expanded by Lewis of Caerleon: Add MS 89442, p. 65

The newly-acquired manuscript of the works of Lewis of Caerleon has been assigned the shelfmark Add MS 89442. It can be viewed in its entirety on the Library's Universal Viewer, and in due course (once Covid restrictions are lifted) it can be consulted by researchers in our Manuscripts Reading Room. By acquiring the manuscript for the nation, the British Library hopes to encourage more research into the writings of this important medieval astronomer and physician, his relationship to the royal court, and his influence upon later scientists. This manuscript is a remarkable witness to the work of Lewis of Caerleon, and we are delighted that it will now be available for study by future generations.