After the break-up of Charlemagne’s empire, his heirs continued his policy of patronising and commissioning great works of art.  The king of East Francia, Otto I (d. 973), revived Charlemagne’s title of Holy Roman Emperor in 962, and together with his son and grandson (also Ottos) gave his name to a monumental, imperial artistic style now known as Ottonian art.  These emperors and their Salian successors (a subgroup of Franks from the Lower Rhine area), Conrad II (r. 1024-39), and Henry III (r. 1039-56) commissioned some of the finest illuminated Gospel-books ever made.

A small but incredibly lavish group of these manuscripts were produced at the wealthy Benedictine Abbey of St Willibrord in Echternach, in modern day Luxembourg, 16 kilometres (10 miles) from Trier.  These include two manuscripts now in the British Library, one in the Harley collection (Harley MS 2821) and one in the Egerton collection (Egerton MS 608). 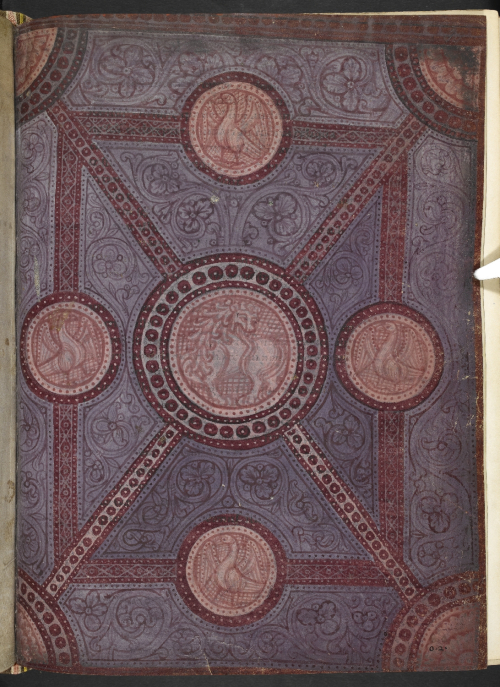 A patterned page with a lion and four birds before the opening of St Luke’s Gospel: Harley MS 2821, f. 99r

One of the most remarkable aspects of the Harley Echternach Gospels is their use of fictive textiles as decoration, including facing pages painted to resemble silk before the individual Gospels.  In many Echternach manuscripts the patterns are monochrome or in varying shades of the same colour, and include animals familiar from Byzantine silks, often in facing or opposing pairs.  In the Harley example the patterns are more colourful and centralized, and resemble the patterns of Late Antique weaving or mosaic floors.

These decorative pages may serve to make the opening of the Gospel text a more revelatory event.  In this sense they may be similar to the actual silk curtains remaining in some manuscripts which can be lifted to view individual miniatures, such as those in the Arnstein Bible which we blogged about previously. 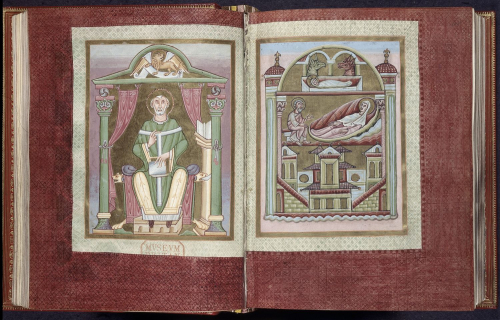 Miniatures of St Mark the Evangelist and the Nativity before the opening of St Mark’s Gospel: Harley MS 2821, ff. 67v-68r

In addition to their independent use as carpet pages, the textile patterns are used as marginal decoration for the first time in the Echternach Gospel-books (Nordenfalk, Codex (1971), p. 98).  This is seen, for example, in the full border around the Evangelist portrait of St Mark and the facing depiction of the Nativity.

The painting of the figures is also highly stylised, using jewel-like vibrant colours.  In content they are indebted to earlier models, with some innovations.  For example, according to tradition, St Mark established the Church in Alexandria and was the first bishop there; in the Harley Echternach Gospels, he wears a chasuble, or outer vestment of a bishop, and he makes a gesture of blessing.  This contrasts with the more typical portraits in which the Evangelists are depicted in the act of writing out their texts.

Opposite each of the Evangelists in the Harley Echternach Gospels is a full-page scene, reflecting four important episodes arranged in chronological order: the Annunciation faces St Matthew; the Nativity, St Mark; the Crucifixion, St Luke; and the Ascension, St John.  This selection may result from the contraction of a much longer narrative cycle that appears in three of the surviving Echternach Gospel-books. 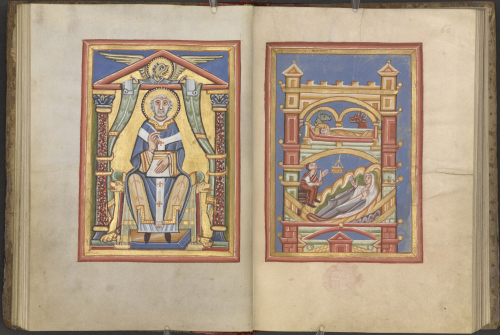 Evangelist portrait of St Mark and a miniature of the Nativity, before the Gospel of Mark: Egerton MS 608, ff. 59v-60r

The Echternach Gospel-book in the Egerton collection has been digitised recently as part of The Polonsky Foundation Medieval England and France 700-1200 project.  The similarities in composition, content and style with the Harley Echternach Gospels are immediately apparent.  For example, the Evangelist portrait of St Mark also depicts him seated frontally, holding a book on his lap and making a gesture of blessing.  His chair features dog-head and feet terminals, and St Mark is flanked by columns and curtains, with his symbol of the lion above.  Opposite, the Nativity scene parallels the two-level composition in an enclosed architectural space, with the Child and animals above St Joseph and the Virgin. 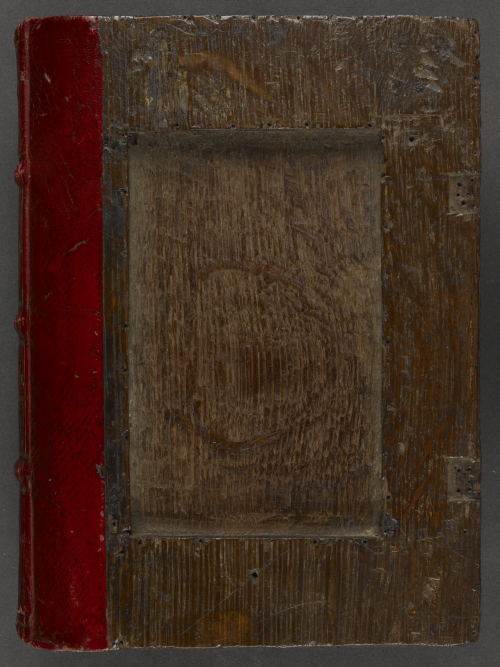 Original oak board of the upper cover: Egerton MS 608

The Egerton Echternach Gospels is a slightly smaller book and doesn’t include the patterned textile margins that are so prominent a feature of the more elaborate Echternach Gospel-books.  However, it retains its thick original oak binding, with a hollow in the front cover.  Originally it is likely that this space was filled with an ivory or metalwork plaque, and perhaps relics, indicating the importance and status of this still lavish Gospel-book.