Today is the two year anniversary of our launch of The Polonsky Foundation England and France Project: Manuscripts from the British Library and the Bibliothèque nationale de France, 700–1200, in which we collaborated with the Bibliothèque nationale to digitise and make available 800 medieval French and English manuscripts from our two collections.

We have two websites: one, hosted by the Bibliothèque nationale, in which you can view all 800 manuscripts in an International Image Interoperability Framework (IIIF) viewer, and a curated website hosted by the British Library on which you can read articles, view individual manuscript descriptions and watch videos and animations. Both are bilingual, in English and French. 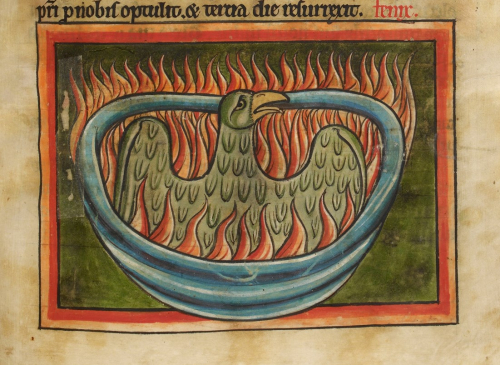 A phoenix rising from the flames: Harley MS 4751

We recently participated in an online seminar sponsored by the Consortium of European Research Libraries (CERL) that celebrated five digitisation projects sponsored by the Polonsky Foundation, some completed and others ongoing. The seminar was oversubscribed, so the presentations were recorded and may be watched here:

(Note: videos of the six presentations will automatically play in sequence, one after the other. Alternatively, you can click the 'playlist' button near the top right to select individual videos to play).

The Medieval England and France, 700-1200 website has been very well received, with over 150,000 individual users from all over the world. The majority of those are from the UK and the US, but there are thousands of viewers from France, Canada, Australia, Italy, Brazil, the Philippines, Spain and Italy making up the top ten countries by use.

So far, the most popular article is on how to make a medieval manuscript, in which you can watch seven videos on different aspects of manuscript production, such as parchment preparation, ink, pigments and applying gold leaf. Viewers spend an average of eleven minutes on this article. Other popular articles are featured in the Science and Nature theme, including those on mathematics, medicine, bestiaries and calendars. Articles discussing the use of Latin, Anglo-Norman French and Old English are also popular.

If you haven’t yet checked it out, or if you are amongst the 30% returning users, do explore the website. You may be interested in watching Professor Nick Vincent discussing law-making in early medieval England or Professor Julia Crick discussing manuscript production after the Norman Conquest. Or perhaps you'll enjoy the animated features on the whale and the crane from the bestiary. The project book has just been reprinted, too, if you would like to buy a copy.

You can read about the work of the Polonsky Foundation on their newly launched website, including about the England and France project.