The show must go on! Putting on a play in the 16th century

The 16th century witnessed a huge revival of popular theatre, as playwrights and acting companies experimented with existing dramatic traditions, new literary techniques, and different approaches to performance. This artistic revival included the work of English writers such as William Shakespeare, Christopher Marlowe, and Ben Jonson, as well as playwrights throughout Europe, particularly in Germany, Italy, and France. Surviving manuscripts from this period can give us a real insight into not just how these plays were written, but also how they were performed.

One such volume, now housed in the Harley Collection of the British Library, contains a rare eye-witness account of the premier performance of a French play that took place in the city of Montbrison on 25 February 1588. 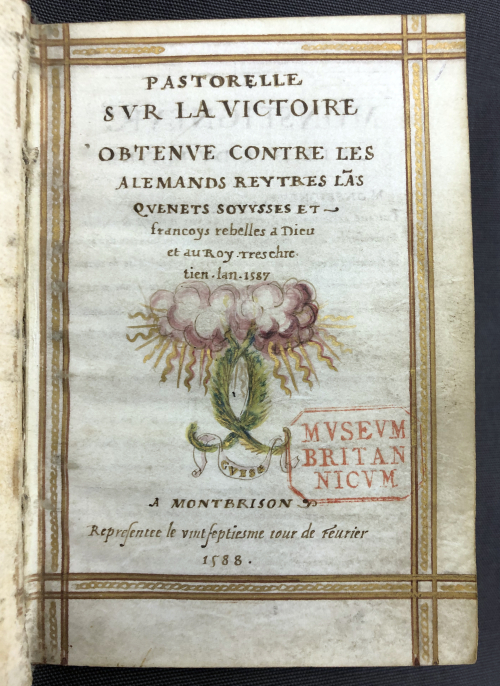 The title page from the autograph manuscript of Loÿs Papon’s Pastorelle. The name ‘Guise’ appears within a device of clouds and lightning, painted in watercolour (Harley MS 4325, f. 1r).

The work was written by Loÿs Papon (b. 1533, d. 1599), the canon of the Church of Notre-Dame-d'Espérance and later abbot of Marcilly, and is entitled Pastorelle sur la victoire obtenue contre les Allemands, Reytres, Lansquenets, Souysses et Francoys rebelles a Dieu et au Roy treschretien l'an 1587 (Pastoral on the victory won against the Germans, the Reiters, the Landsknecht, the Swiss, and the French Rebels by God and our most Christian King in the year 1587).

The plot of Papon’s play is simple. Rather than depict the conflict between the Catholic and Huguenot armies on stage, Papon’s narrative focuses on a small group of shepherds, whose lives in the French countryside have been in turmoil since the start of the war. In the first half of the play, the audience hears how the war has affected the shepherds during that time – how their crops have been blighted and their lands and possessions looted by invading armies – as they recount their struggles and voice their fears of new dangers that might affect them in the future.

During the third act, however, the shepherds learn about what has taken place during the battles at Vimory and Auneau, and in the course of Acts IV and V, buoyant at the news of Henry’s victories, they celebrate that their once peaceful lives will now be restored. 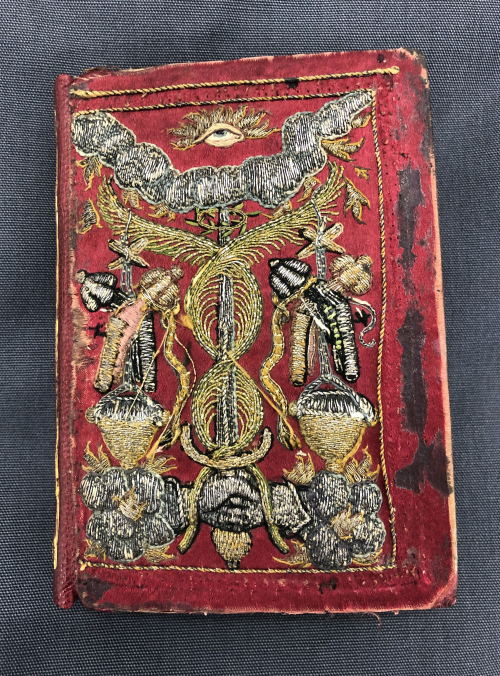 The manuscript (now Harley MS 4325) was written and illustrated by Loÿs Papon himself, who probably intended it as a presentation copy of the text. The work begins with a dedication from the author addressed to a certain ‘M[onsieur] le duc de Mayne’, who can be identified as Charles de Lorraine (b. 1544, d. 1611), Duke of Mayenne and brother of Henry, Duke of Guise, who led the victorious French army.

The volume also survives with its original 16th-century binding intact. Its red velvet covers feature a collection of different symbols, delicately embroidered with silver, gold and coloured thread, including two hands grasping a sword, a pair of chalices, a crown of thorns, and a single eye appearing above a cloud.

The account of the play’s first performance appears directly after the main text of the work in the manuscript and was also written by Papon. The ‘discours’ or account states that this took place on 25 February 1588 at the Salle de la Diana, in the city of Montbrison, the historic capital of the French region of Forez (now part of Central France), and the playwright’s birthplace.

Papon’s account provides details about all aspects of the production, from the actors and musicians, to the set and the props, and even the composition of the audience. He tells us, for example, that: 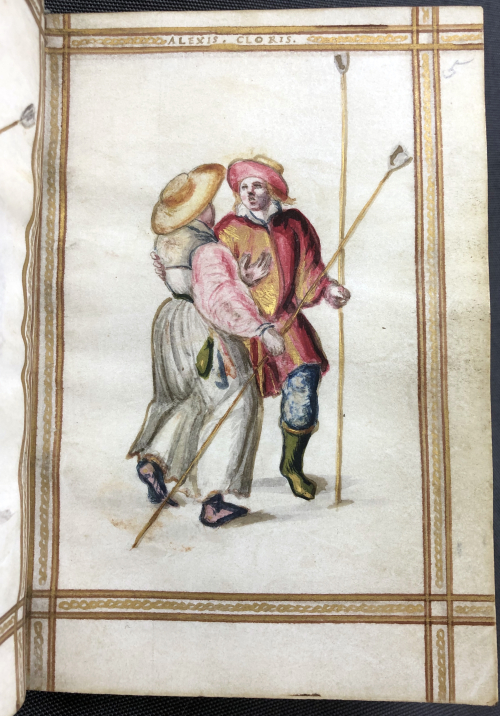 Portraits of two of the shepherds, Alexis and Cloris, in costume, from an autograph manuscript of Loys Papon’s Pastorelle (Harley MS 4325, f. 5r).

In addition, the volume includes a paper fold-out inserted at the end of Papon’s account, which opens to reveal a watercolour illustration of Act IV, Scene II of the Pastorelle, showing how this scene was staged in the Salle de la Diana. The image suggests that despite the simplicity of the narrative, the production itself was a real spectacle, ambitious in its scale. In the scene, the assembled shepherds, having learnt of the defeat of the Huguenot forces, decide to construct a pyramid on stage, light a fire at its base, sing songs, and dance around it to express their joy at the news. 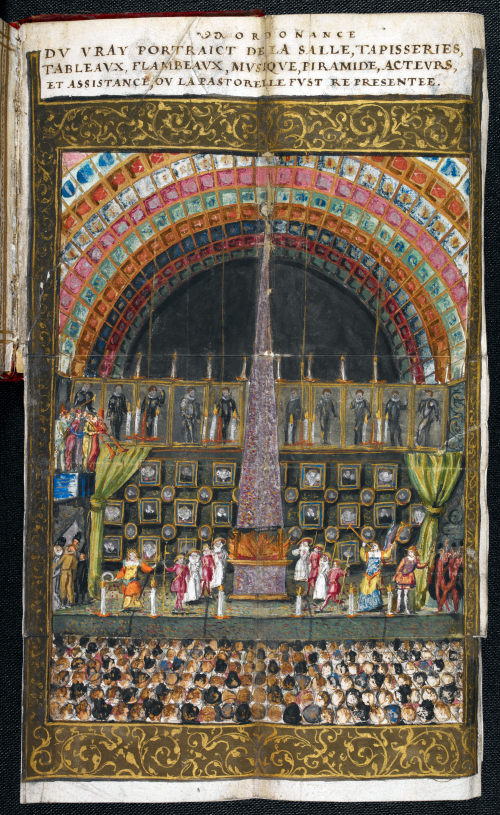 One of the most significant features of the watercolour is the Salle’s vaulted and vibrantly coloured ‘plafond’ or ceiling, tall enough to accommodate the pyramid’s spire (standing 18 feet high according to Papon’s account), and which is shown adorned with numerous compartments, each one bearing a small coat of arms. 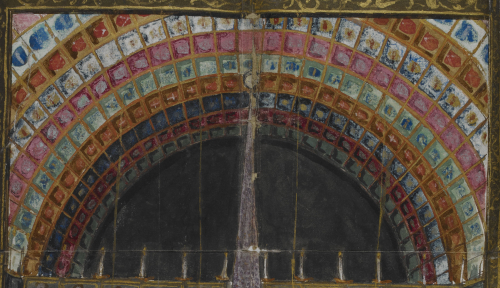 Fortunately, the Salle de la Diana in Montbrison has survived to the present day and is now home to a library that holds over 30,000 books. Its elaborately decorated heraldic ceiling (featuring a total of 1728 coats of arms) was restored during the 19th century, and appears nearly identical to the design reflected in Papon’s illustration of the Pastorelle’s first performance. 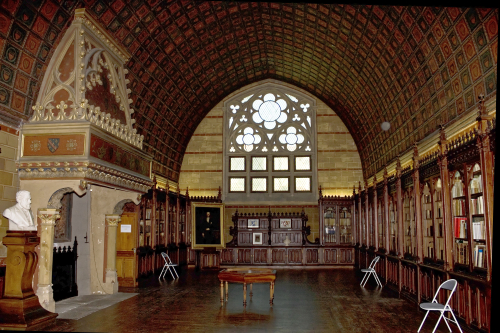 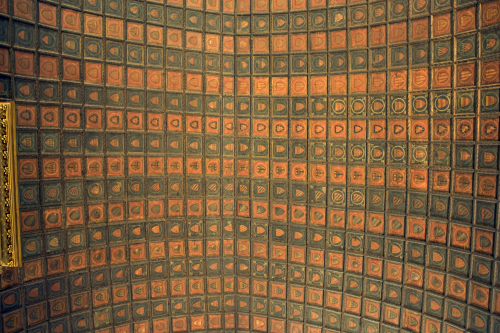 This manuscript’s catalogue record has recently been revised as part of the Harley Cataloguing Project. For more information about the project and other recent discoveries, check out our blogpost on cataloguing the Harley manuscripts.