900 years since the White Ship disaster

900 years ago today a tragedy took place which would dramatically alter the course of British history. On the evening of the 25th November 1120, a recently renovated ship of the finest construction set sail from the port of Barfleur on the Normandy coast. The White Ship, as it was named, had on board around 300 people, including an a-list of English nobles and the only legitimate son of King Henry I of England, the 17-year-old William Adelin. But when the sun rose the next day, the fishermen of Barfleur found that only a few pieces of floating wreckage and one clinging survivor were all that remained of the White Ship. 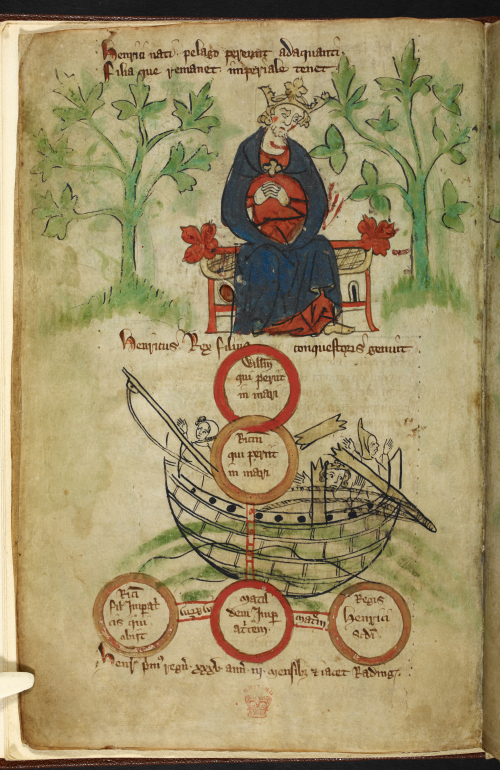 Illustration of King Henry I and the White Ship from Peter of Langtoft’s Chronicle: Royal MS 20 A II, f. 6v

There are many accounts of the sinking of the White Ship, many of them written long after the event. One of the earliest and most detailed accounts is in William of Malmesbury’s History of the English Kings, the first surviving version of which is thought to have been written around 1126. William of Malmesbury paints a vivid picture of the young prince, showered with every privilege, the great hope for the kingdom’s future, who was tragically cut off before his prime. 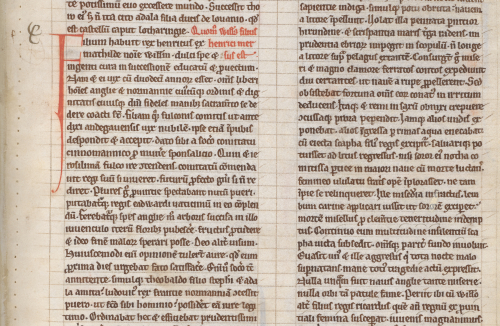 William of Malmesbury tells how Henry I and his followers were returning from a trip to France, during which William Adelin paid homage to King Louis VI of France and was made Duke of Normandy. King Henry’s ship departed first and reached England safely. But William Adelin, with ‘almost all the young nobility flocking around him’, led a second vessel, the White Ship. The young nobles, left to their own devices, started drinking and partying. The sailors also joined the fun, and after a few drinks too many they started boasting that they would overtake the king’s ship. When the White Ship launched after dark, the crew rowed as fast as they could, ‘swifter than an arrow’, straight into a rock offshore. 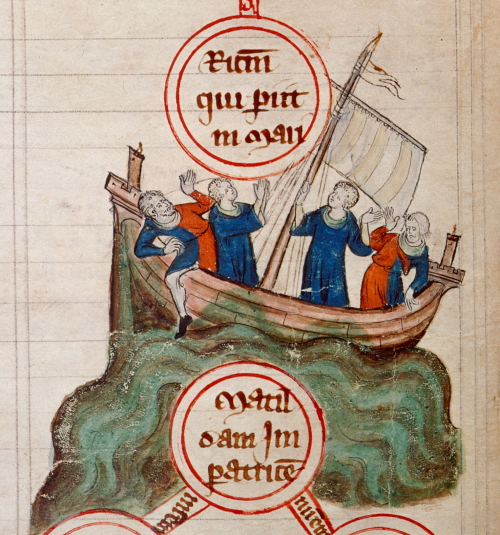 The White Ship instantly began to sink. In a bid to save the prince, the crew launched a small boat and set William Adelin inside it. He would have escaped had he not heard the cries of his half-sister, Matilda, countess of Perche, still on board the sinking vessel. William ordered the oarsmen to go back for her, at which the small boat was overwhelmed by frightened people trying to clamber aboard and sank as well. The only survivor, a ‘rustic’, managed to cling to the floating mast all night.

A significant proportion of the English royal household and aristocracy died that night, and most of the bodies were never recovered. As William of Malmesbury famously summed it up, 'no ship ever brought England so much misery'.

Other accounts provide additional details. Most notably, Orderic Vitalis, writing around 20 years after the event, reported that priests had tried to bless the travellers before they set sail, but the rowdy company had laughed and driven them away. He adds that a number of people, including Stephen of Blois, were due to board the White Ship but decided against it when they saw the state of inebriation of them all. The sole survivor was identified by Orderic as a butcher from Rouen named Berold, who lived for a further 20 years. He also described how the captain of the ship, Thomas Fitzstephen, deliberately allowed himself to drown to avoid facing King Henry’s anger. Apparently, no one dared tell the king the news and, when he finally learned of it from a boy, his grief was immense. 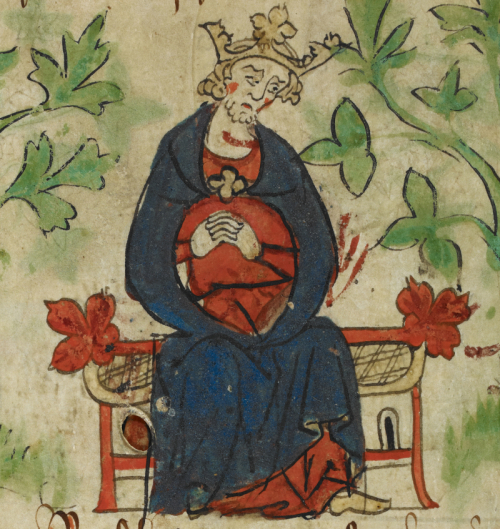 Detail of King Henry I wringing his hands in grief, from Peter of Langtoft’s Chronicle: Royal MS 20 A II, f. 6v

The sinking of the White Ship has been the focus of several conspiracy theories. The idea that the ship was deliberately sabotaged was suggested by the novelist Ken Follett in Pillars of the Earth (1989), and by the scholar Victoria Chandler in her article ‘The Wreck of the White Ship: A Mass Murder Revealed?’ (1998).

None of the medieval sources imply that there was anything suspicious about the disaster. It’s difficult to imagine that such an act of mass murder could have been committed without raising any suspicions at the time, and any intrigue would almost certainly have been reported by the chroniclers. It’s also questionable how the ship could have been effectively sabotaged without the saboteurs themselves dying, and who stood to clearly gain from the disaster. 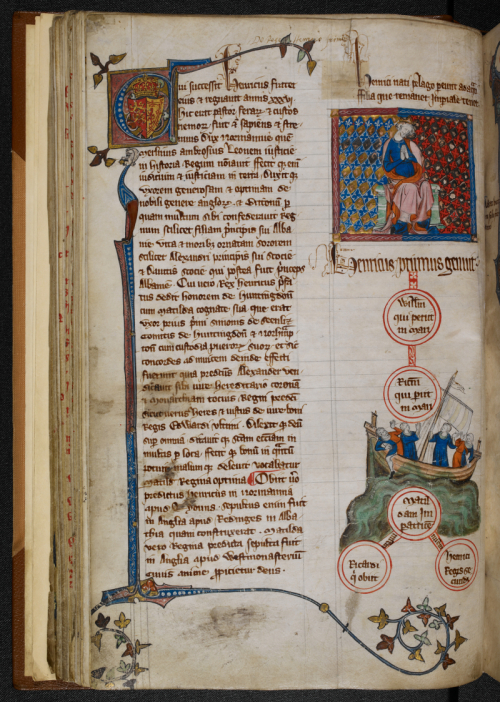 What were the consequences?

While the sinking of the White Ship was a personal tragedy for those involved, it was also a political disaster which caused a succession crisis and civil war in England, a period known as the Anarchy. The death of William Adelin on the White Ship left King Henry I without a legitimate male heir. Although he remarried soon afterwards, Henry was unable to have any more children. As a result, he declared his daughter, Matilda, as his heir. But on Henry’s death in 1135, his nephew Stephen of Blois seized power. Matilda fought back, and period of long and devastating civil war ensued. Peace was only achieved in 1153, when Stephen agreed to recognise Matilda’s son as his heir, the future King Henry II. 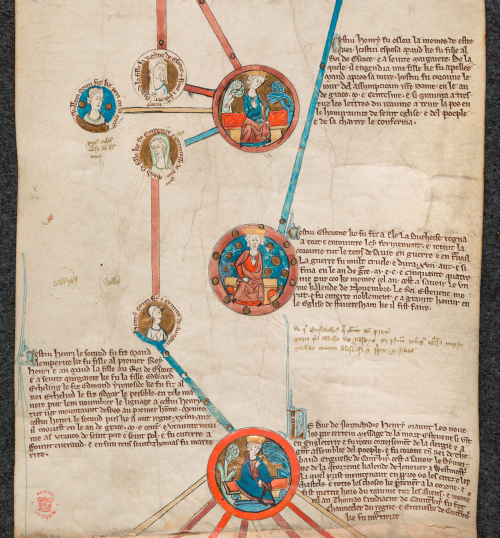 Detail of the royal family tree from Henry I to Henry II, showing King Henry I, his wife Matilda of Scotland, their children William Adelin and Matilda, Henry’s nephew Stephen, and Matilda’s son, Henry II, from a Genealogical Chronicle of the English Kings: Royal MS 14 B V, Membrane 5 (image 'f. 5r')

Ultimately, the White Ship disaster is a reminder of how one tragic event could change the course of history. On the 900th anniversary of the event, spare a thought for the victims of the disaster, both the people who died on the ship and the many thousands who suffered in the civil war that followed.