Papyrus documents often provide unique glimpses into the everyday lives of individuals as well as entire families. As the festive season is approaching, in today’s blog post we have decided to tell a story of family affection and fondness from over 1,800 years ago, preserved on a sheet of papyrus recently catalogued and now fully available online. 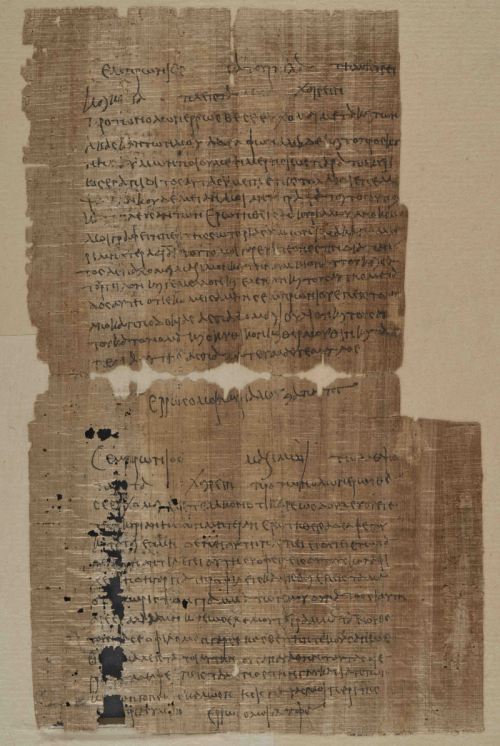 Two letters on a papyrus sheet from the archive of Saturnila and her sons, late 2nd century: Papyrus 2102

Papyrus 2102 is part of the archive of a woman called Saturnila and her sons. It is also known as the ‘Happy Family Archive’, because of the affectionate tone in which the members of the family address each other. This archive consists of eight papyri containing twelve letters, now held in collections across Europe and America. The correspondents are members of a family of Roman citizens living in the Fayum (Middle Egypt), perhaps in the village of Karanis. On palaeographical grounds, the papers, written in Ancient Greek, have been dated to the late 2nd century, when Egypt was part of the Roman empire.

The key figure is Saturnila, mother of at least five and probably seven children; she was presumably a widow as no mention of a husband is made in the documents. Most of the letters preserved are addressed to her, and one of these is Papyrus 2102, which contains two letters written on the same sheet. 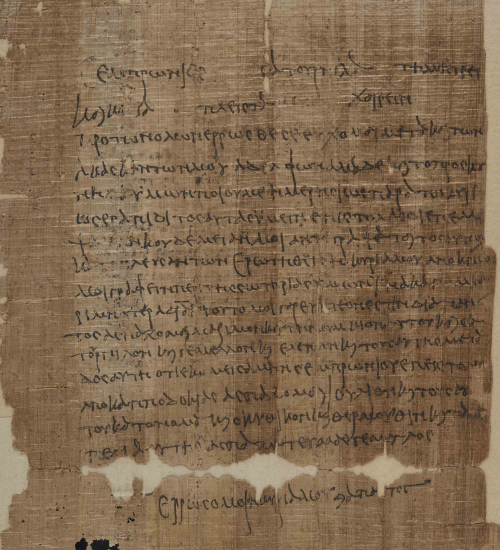 The first letter, from Sempronius to Saturnila

In the first letter, Sempronius, apparently the eldest of the brothers and undoubtedly a very caring son, writes to his mother, as he often does. He is frequently away from home, and is presumably staying in Alexandria. As usual in his letters, he expresses anxiety over Saturnila’s welfare, for whom he makes daily supplications to the god Serapis. He is also concerned about her silence, and urges her to reply to the numerous letters that he had sent her:

‘How many letters have I sent you and not one have you written me in reply, though so many people have sailed down! I beg you, my lady, be not slow to write me news of your welfare that I may live in less anxiety; for your welfare is what I pray for always’. 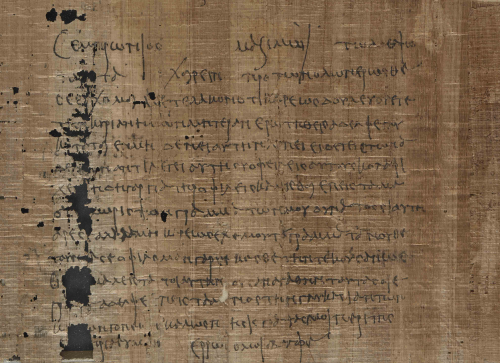 The second letter, from Sempronius to Maximus

The second letter, on the other hand, is addressed to Maximus, one of the oldest brothers (perhaps the second oldest), who seems to have acted as the head of the household in Sempronius’ absence, and who features as the addressee of many letters. We learn from other missives that Maximus was married, had daughters, but lost his wife, whose passing he deeply mourned.

In this letter from Sempronius, the tone of brotherly affection is vivid, but the message contains a heavy reproach:

‘I have been informed that you serve our mother and lady grudgingly. I beg you, sweetest brother, do not grieve her in anything; and if any of our brothers gainsays her, you ought to cuff them; for you ought now to take the name of father. I know that without my writing you are able to humour her, but do not be offended by my letter of admonition; for we ought to revere our mother as a goddess, especially one so good as ours. This I have written to you, brother, because I know how sweet a possession our revered parents are.’

Sempronius’ words recall the Greek concept of ‘gerotrophia’, that is, the caring for an elderly parent, which was considered a moral duty in return for everything the child had received during their upbringing. Already in Hesiod’s myth of the ‘Five Ages’, for example, people dishonouring their aged parents and not repaying them for the care they received were considered a sign of human degradation.

The verso of the papyrus containing the address: ‘Deliver to Maximus from his brother Sempronius’

Although one of the letters is for Saturnila, Maximus features as the only recipient in the address on the back of the papyrus. Saturnila is not mentioned, and nor does she feature in the address on the other letters for her. She may have been illiterate, as many women were at that time. It has also been argued that in this way the information reaching Saturnila’s ears could be kept under control by her sons. Saturnila’s correspondence was probably read out loud to her by one of them, and this could also explain why two letters were written on the same sheet. Or was perhaps Sempronius a very parsimonious man?

Although more than a millennium has passed, Sempronius’ love for his family is still vivid: thanks to the papyri, we can still be moved by his words, share his concerns, and reflect on his advice.