Steam engines are heat-operated devices which use the force of steam pressure to generate rotational force. The importance of steam-generated energy for human history can hardly be overestimated. Without steam engines and the machines, trains and ships they powered, industrialisation, globalisation and economic growth would all have taken radically different shape.

The invention of the steam engine is usually ascribed to British engineers of the 17th and 18th centuries. James Watt (d. 1819) is best known for inventing an especially efficient type of the engine in 1786, which was applied first to trains and then in the early 19th century to ships. It is much less known that the engine was invented in the 1st century AD by Greek engineers of Alexandria, more than 1,500 years before Watt. The British Library holds a remarkable collection of Greek manuscripts that describe and illustrate these early steam engines in great detail. More information can be found in Ian Ruffell's article, Greek mechanical texts.

The most important authority in mechanics from Antiquity was Hero of Alexandria, who lived in the 1st century AD. Relying on the work of earlier scientists, Hero compiled a number of treatises on mechanics, physics and war machinery, which were often richly illustrated.

One of Hero's works, entitled Pneumatics after the Greek word (pneuma) for air and gases, contains descriptions of a number of machines and automata that made use of gases and steam in various ways. One of these was a construction that fulfilled exactly how a steam engine should convert steam pressure to rotational force. Fortunately, the manuscripts contain illustrations of the machine Heron described, so we have a reliable image of what this Greek scientist may have had in mind.

Hero’s device was very simple. It consisted of a cauldron under which a fire was ignited. The cauldron contained water and was covered by a lid with two bent tubes (marked ξ and μ on the illustration) connecting to a ball (λ), which had two nozzles (θ and κ) pointing in opposite directions. Once heated underneath, the steam went through the pipes into the hollow ball and exited through the two nozzles in opposite directions, resulting in a rotational movement of the ball in order to achieve a steady speed. Hero’s description was so accurate that it has been possible today to recreate a fully operational version. 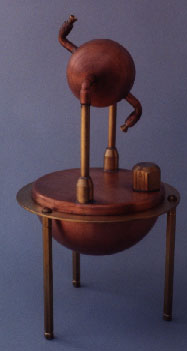 Surprisingly, the ancient scientists do not seem to have recognised the revolutionary potential of their invention. The machine, along with a number of similar constructions preserved in these manuscripts, seems to have served very unpractical purposes. Many of these automata were designed only to entertain and surprise the guests at banquets and feasts, having figures of animals or mythical figures that moved around and had water flowing through them. 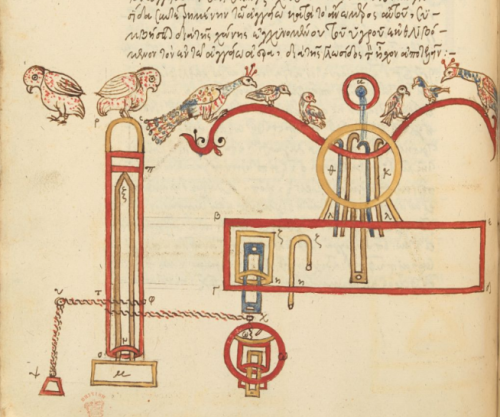 Hero used some of his automata for cultic and religious purposes. He constructed a special system to open temple doors without any human interaction. In one construction he even designed trumpets to be sounded at the opening of the gates. There were sacrificial pyres that lit up at the sound of the trumpet to praise the power of the gods. Rather than machines to help the production of goods and sustain economic growth, ancient engineers explicitly considered their inventions only as devices which, as the Roman architect Vitruvius wrote in the first century AD, 'show the mighty and wonderful laws of heavens and Nature'. 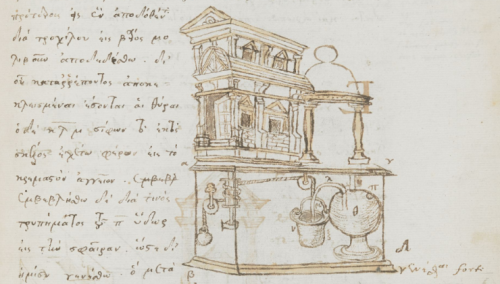 The design of an animated model of a sanctuary from a copy of Hero's Pneumatics (Italy, 16th century): Burney MS 81, f. 20r (detail)

Hidden in this context, Hero’s designs and illustrations were forgotten and barely copied for centuries until the Renaissance. It was only with the arrival of Greek intellectuals to Florence that manuscripts of Hero’s works, with their rich illustrative tradition, reached Europe, where humanists were amazed by their scientific content. 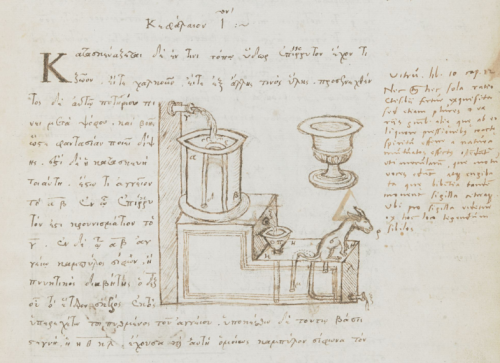 Marginal annotations in Latin to one of Hero’s designs, comparing it to other ancient scientific sources, from a copy of the Pneumatics (Italy, 16th century): Burney MS 81, f. 14r (detail)

Around this time there arose a great demand for copies of Hero’s works. 15th- and 16th-century illustrated manuscripts of his treatises abound and were soon dispersed across Europe. Hero’s texts were translated into Latin and Italian and printed several times. His designs, originally intended for entertainment and worship, had now become practical guides for further experiments and new discoveries. In the hands of the engineers of the 17th and 18th century, they became the blueprints for a more elaborate and effective steam engine that could be used in factories, trains and ships.