New Prophecies of the Ancient Sibyls

The British Library's major project to provide online catalogue records of manuscripts in the Harley collection has made significant progress in 2020. We have now enhanced the descriptions of some 3,000 Harley manuscripts, and more are being added every month to our Archives & Manuscripts Catalogue. Along the way, we are continuing to make new identifications and to unearth hitherto unknown texts. In this blogpost, Clarck Drieshen describes the recent discovery of a 14th-century Latin manuscript from France (Harley MS 3723) that contains previously unknown copies of the universal chronicle of the French Dominican friar Gerald of Frachet (1205–1271) (a history of the world from the Creation up to his own time) and a text on the ancient female oracles known as The Prophecy of the Tenth Sibyl. 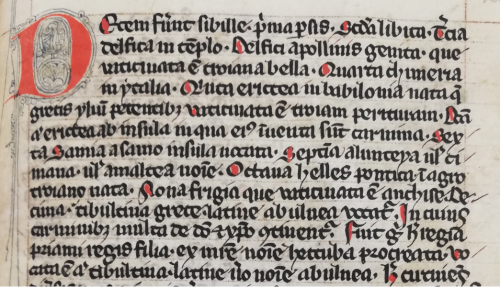 The Prophecy of the Tenth Sibyl tells of ten female oracles, known as Sibyls, who prophesied from sacred locations in regions around the Mediterranean Sea. Except for reporting that the Sibyls at Delphi and Erythraea had predicted the Trojan War, this work has little to say about the first nine oracles. As its modern title suggests, the focus is on the tenth Sibyl, named Tibultina in Greek and Albunea in Latin. She was also known as the 'Tiburtine Sibyl', after Tibur (modern-day Tivoli in Italy), from where she was believed to have made her prophecies. The work identifies her as the daughter of Priam and Hecuba, the legendary last king and queen of Troy, making her the sister of the Trojan princes Hector and Paris and the cursed prophet Cassandra. 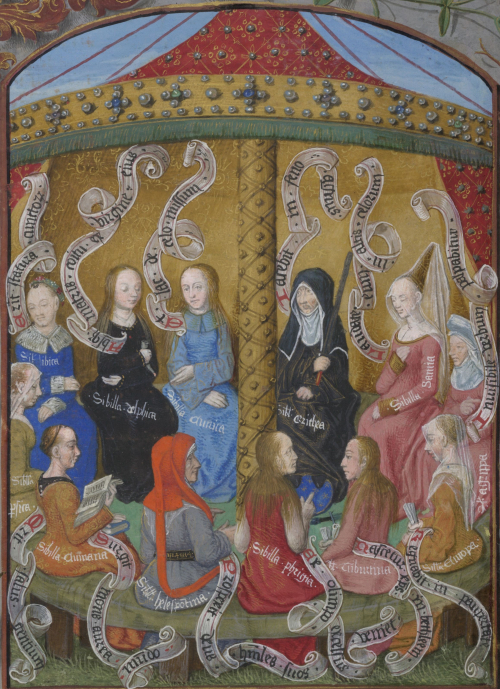 In the Middle Ages, the Tiburtine Sibyl was known especially for predicting the birth of Christ. One legend told that she showed Emperor Augustus (r. 27 BC–14 CE) a vision of the Virgin Mary and the Christ Child, which stopped him from declaring himself divine. 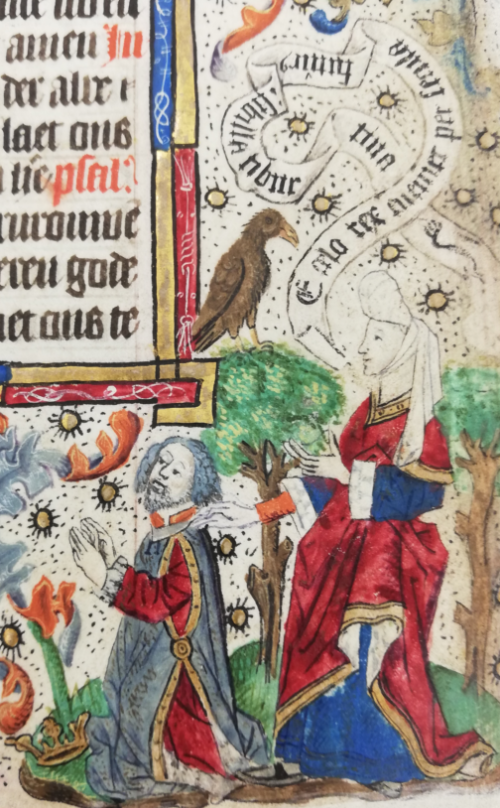 In The Prophecy of the Tenth Sibyl, a Roman emperor summons her after one hundred senators had experienced the same dream on the same night. In this dream, nine different suns had appeared in the sky. Asked to interpret the dream, the Tiburtine Sibyl explained that the suns represented nine future eras. She prophesied that one sun, which the senators described as having a blood-red colour, signified an era in which a virgin named Mary would bear a child named Jesus, the son of God. She also foretold that the last sun to appear in the dream, which had been very gloomy, represented the end time in which the son of God would return for a final judgement over humankind. 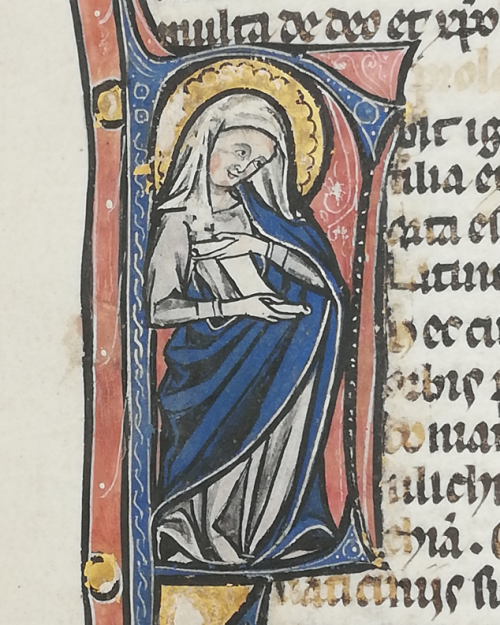 The Prophecy of the Tenth Sibyl concludes with a poem about the end of the world that contains a ‘hidden’ reference to the birth of Christ and his return at the world's end. In the original Greek version of the poem, reading the first letter of each line downwards spells out the words: ‘Iesous Chreistos Theou Uios Soter’ (‘Jesus Christ the Son of God, the Saviour’). The Latin translator tried to preserve this vertical text (acrostic), but was not always able to find a meaningful Latin word starting with the required letter. 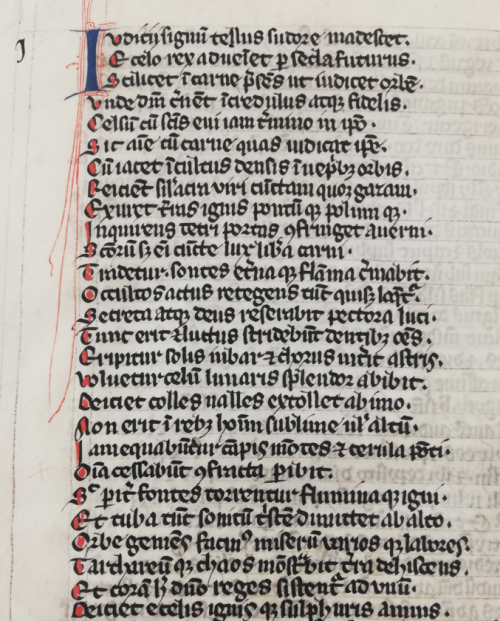 Although we now know that The Prophecy of the Tenth Sibyl originated from a Greek text composed by a 4th-century Christian writer, that in turn was translated into Latin and expanded around the year 1000, medieval authors believed that the Tiburtine Sibyl's prophecies were authentic, and they considered her an important witness to the truth of the Gospels. Her prophecies were circulated widely and today survive in over 100 manuscripts. You can read more about the manuscript tradition in Anke Holdenried, The Sibyl and Her Scribes: Manuscripts and Interpretation of the Latin Sibylla Tiburtina c. 1050-1500 (Aldershot: Ashgate, 2006).

The Prophecy of the Tenth Sibyl (? Canterbury, 1st quarter of the 12th century): Cotton MS Vespasian B XXV, f. 117v

The 13th-century Dominican friar Gerald of Frachet would undoubtedly have been interested in the Tiburtine Sibyl's predictions about Christ, but probably also in her prophecies about the kings involved with the events leading up to the end time. Since she referred to these important kings only by their first initials, medieval authors were able to identify rulers living in their own times with these prophesied kings. Gerald himself felt a strong allegiance to Charles of Anjou (1226/1227–1285), the youngest son of Louis VIII of France and founder of the Capetian House of Anjou. In his universal chronicle, he stressed that Charles was a descendant of Charlemagne (748–814), King of the Franks and Emperor of the Romans, and compared his victory over Manfred, King of Sicily, in 1266 to Charlemagne’s victory over the Lombards. The Tenth Prophecy of the Sibyl predicted a powerful Frankish king whose name began with the letter ‘K’ and was clearly identifiable with Charlemagne (‘Karolus Magnus’). By adding her prophecies to his chronicle, Gerald may have wanted to emphasise Charles of Anjou’s ancestry and attribute an important role to him — a new Charlemagne — on the world stage. You can read more about the relationship between the chronicle and the prophecies in Régis Rech, ‘Charles d'Anjou et le Limousin: la conquête du royaume de Naples chez Hélie Autenc et Géraud de Frachet’, Bibliothèque de l'Ecole des Chartes, 158 (2000), 443-73. 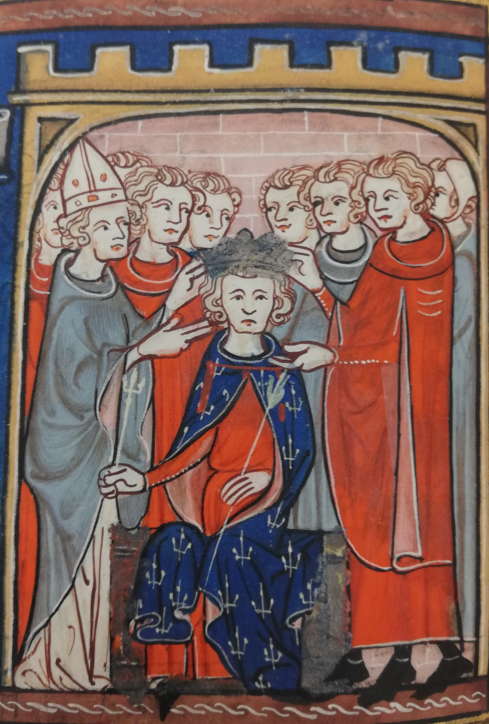 Harley MS 3723 is an important witness to Gerald of Frachet’s work. Of the roughly 25 manuscripts of his universal chronicle known previously to scholars, only three others contain the The Tenth Prophecy of the Sibyl. This arrangement of texts may also have been part of the manuscript that Gerald is thought to have presented to Charles of Anjou. Harley MS 3723 is also the only copy of Gerald’s work that reached England in the Late Middle Ages. Although English readers may have been less keen to identify the kings in the Tiburtine Sibyl's prophecies with French rulers, her predictions about disease and warfare may have strongly resonated with their experiences of the bubonic plague and Hundred Years War.