In these dark days of January, we all dream of escape. Perhaps it's time for a virtual vacation, medieval style. Here are some options to choose from.

Paris is the ultimate city of romance and culture — a firm favourite of tourists. This miniature shows the River Seine and perhaps the Ile de la Cité with the Palais (now the Conciergerie) on the right. You are unlikely to meet armoured men there nowadays, though you may see some ‘gilets jaunes’. 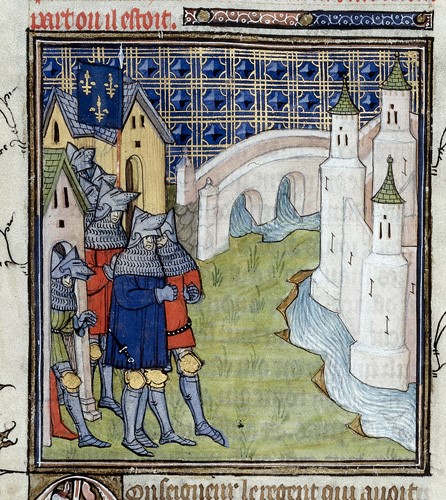 Or how about renting a chateau in the French countryside? 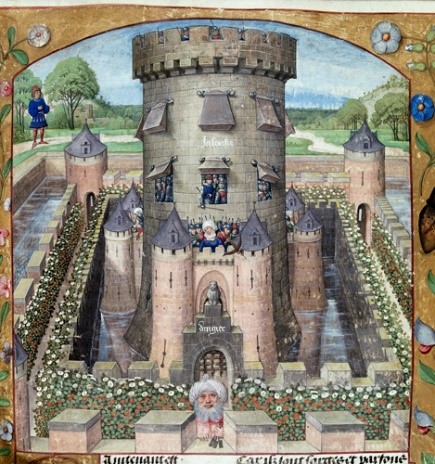 Tuscany has it all — rolling hills with stunning vistas, hilltop villages of luminous Tuscan stone, sunshine, art and wine — and Florence, beloved home-town of Dante Alighieri, pictured here flying over the landscape with Beatrice, in his vision of Paradise. Or how about a package holiday to sunny Spain? A Spanish trip should always include a ‘Costa’ as the sun is bound to shine and the nightlife is great. Do you prefer the Costa Blanca, Costa Brava or Costa del Sol? Lisbon’s palaces, monasteries and its great location on the estuary of the River Tagus  make it a perfect place to spend a weekend. This detailed border image in a genealogy of the kings and queens of Portugal shows the major sites and the city, including the Jeronimos monastery (completed 1521) a little way up the coast. It was painted by the artist Antonio de Holanda, who was based in Lisbon. 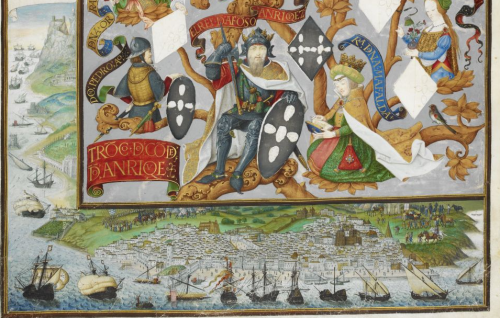 A genealogical tree of the kings and queens of Portugal from Alfonso Anriquez; in the lower margin is the port of Lisbon, with sailing ships outside the harbour (Lisbon, 1530–34): Add MS 12531, f. 7r

Cyprus and the Greek Islands

Cyprus is perhaps the destination for foodies. The well-known medieval armchair traveller, Sir John Mandeville, ‘visited’ Cyprus, where he found various recreational activities including magnificent feasts. Some of the places seen by Mandeville were illustrated by a Bohemian artist. 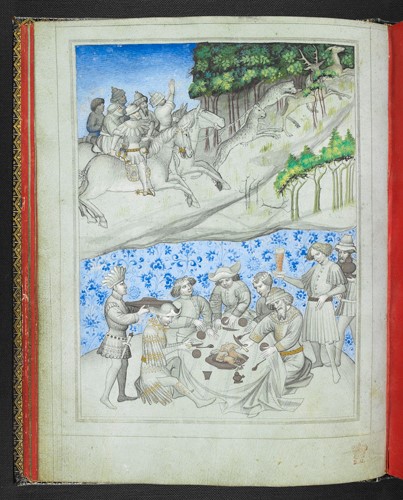 Recreation in Cyprus with, above, a deer hunt using leopards and, below, a feast, in an illustrated version of Mandeville’s Travels (Bohemia, early 15th century): Add MS 24189, f. 5v

For those who wish to combine the sun and sea of the Greek Islands with a visit to a World Heritage Site, a visit to the island of Patmos is recommended. It was here that St John the Evangelist was exiled and had his vision of the Apocalypse. The Holy Monastery of the Apocalypse was built on the site of the cave where John heard the voice of God. Images of him writing the Book of Revelations on Patmos are usually found at the beginning of medieval Apocalypses. 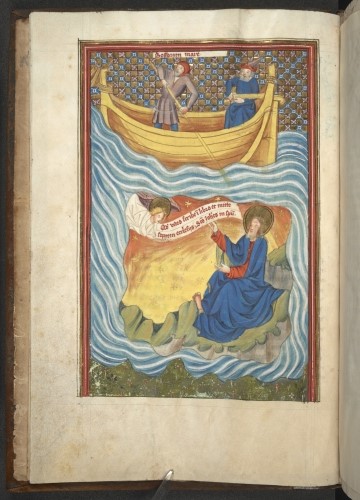 There are different types of holidays to choose from, some of them further afield, but for most people, a beach holiday is the most popular. Sadly, there are not many pictures of beaches in medieval manuscripts. However, we did find one in a 16th-century notebook of botanical watercolours of plant species and landscapes by the Italian botanist, Gherardo Cibo. The plant, Convolvulus or Coastal Bindweed, is shown beside a long beach with fishermen carrying rods, but with no parasols or deckchairs in sight. 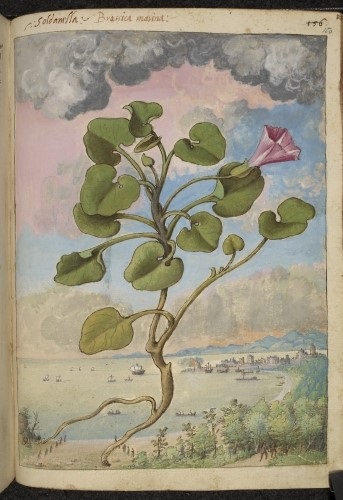 And for those who enjoy swimming, please do remember your swimming trunks; it's advisable not to wear a crown. This image is from a collection of tales of famous women by Christine de Pizan, and it illustrates the story of Camilla from the Aeneid. King Metabus escapes across the river with his daughter after being dethroned by his enemies. 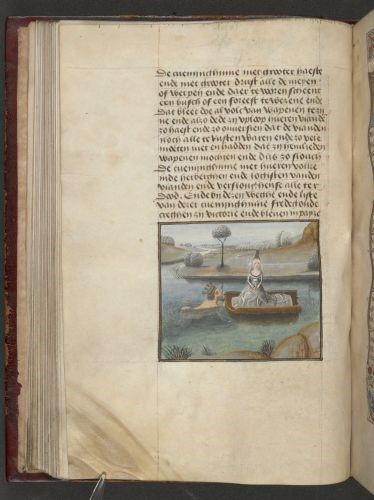 The Escape of Camilla in a boat with the king swimming behind, in a Flemish translation of Cité des dames (Netherlands, 1475): Add MS 20698, f. 64v

For exploring Asia, Alexander the Great would be the best guide. With him, you could go diving, visit the trees of the Sun and Moon, and see exotic beasts in India. 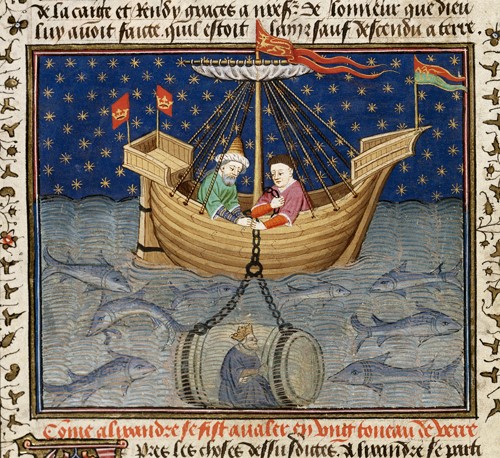 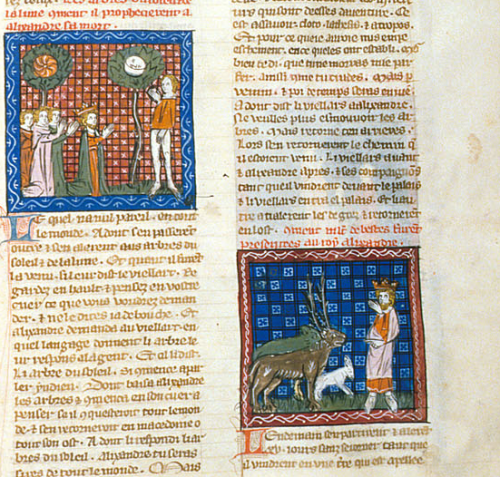 The ultimate destination for the adventure traveller is a safari to Africa. Here are some of the animals you might see if you are lucky – and some you might not! A leopard chasing a stag, with a camel and another animal, in a bestiary: Royal MS 12 F XIII, f. 7r

For our British readers, if this is all too much and you prefer a staycation, there are some lovely places to visit in our own green and pleasant land. 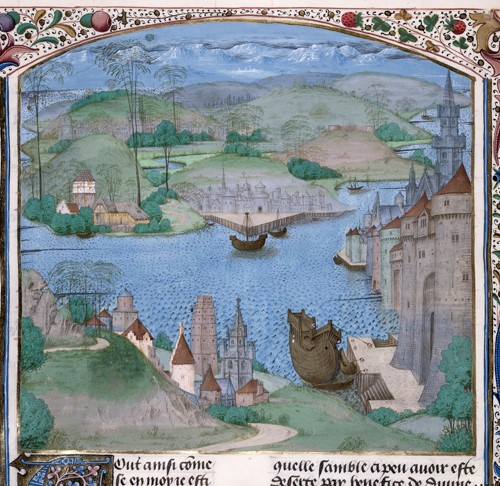 Don't forget that you can explore these and other manuscripts on the British Library's Digitised Manuscripts site and on our Catalogue of Illuminated Manuscripts.