Bede, The Dig and Sutton Hoo

This weekend has seen the release on Netflix of The Dig, a fictionalised account of the excavation at Sutton Hoo of an Anglo-Saxon ship-burial. Starring Ralph Fiennes as Basil Brown, a self-taught archaeologist, and Carey Mulligan as a very youthful Edith Pretty, the landowner, The Dig is based on real events. The Sutton Hoo finds are among the most extraordinary from early medieval England — we displayed this gold belt buckle and part of the sword-belt in the British Library's recent Anglo-Saxon Kingdoms exhibition — but the identity of the person buried with the ship remains unresolved. In this blogpost we review some of the oldest written evidence connected to Sutton Hoo, as recorded in Bede's Ecclesiastical History. 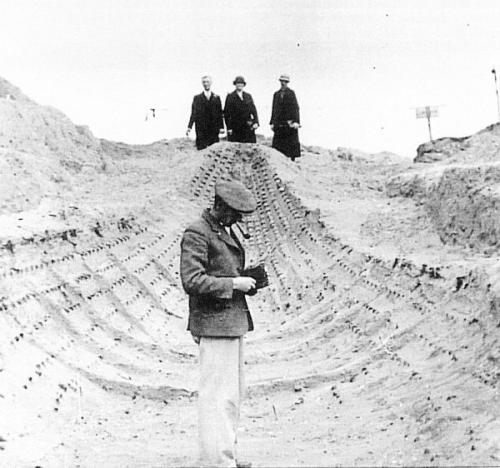 A photograph of Basil Brown in the ship-burial, from the website of the Sutton Hoo Ship's Company

The mound containing the ship-burial at Sutton Hoo, on the banks of the River Debden in Suffolk, was opened in the summer of 1939, on the eve of World War II. At first, Basil Brown was digging with the assistance of Mrs Pretty's gardener, her gamekeeper and an estate worker, until archaeologists from Cambridge University and the Ordnance Survey intervened. Together they uncovered not only the outline of an early medieval ship, revealed by the rivets left in the sandy soil, but a number of grave goods including precious jewellery, silver bowls from the Mediterranean, and the remains of the famous Sutton Hoo helmet.

After the war the finds were examined by a young researcher, Rupert Bruce-Mitford, who spent the rest of his career analysing the site. Although much of the context for the discoveries had already disappeared by the late 1940s (Sutton Hoo had been commandeered by the British military during wartime), Bruce-Mitford recognised that the combination of 'pagan' and 'Christian' artefacts most likely dated the burial to the period of the conversion of the kingdom of the East Angles to Christianity, in the 7th century. 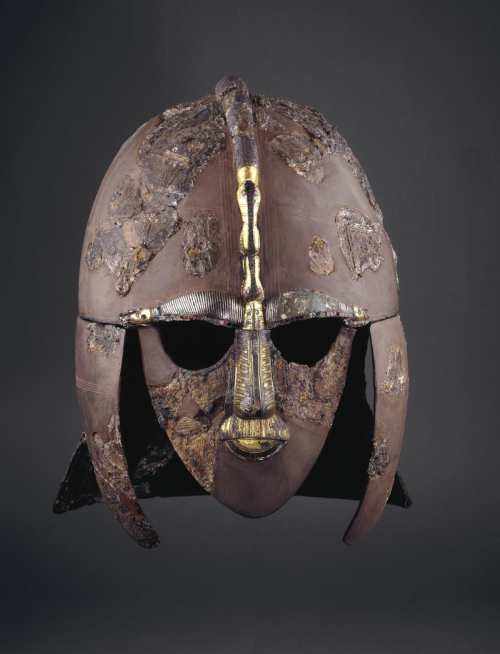 The Sutton Hoo helmet, courtesy of the British Museum

Over the years a number of candidates have been put forward as the person buried in the ship-mound. They include Rædwald, king of the East Angles from around 600 to perhaps the 620s, and his sons and successors Earpwald and Sigeberht. Some historians and archaeologists have been less circumspect than others in naming Rædwald, the most famous of the three, as the king commemorated at Sutton Hoo. This is based, in turn, on the account of the East Anglian kingdom provided by Bede approximately 100 years after the burial.

Bede (died 735), a monk at Wearmouth in Northumbria, completed his Ecclesiastical History, or Historia ecclesiastica gentis Anglorum, in 731. Much of its focus is on the conversion period, from the mission of Augustine from Rome to Canterbury in 597 to the time when the other Anglo-Saxon kingdoms first adopted Christian customs.

The British Library holds two of the oldest surviving manuscripts of Bede's History, both of which can be viewed in full on our Digitised Manuscripts site. One of them (Cotton MS Tiberius A XIV) was probably made in Northumbria in the late 700s or the early decades of the 800s. The other (Cotton MS Tiberius C II) is characterised by the decorated initials which mark the beginning of each book, and it was most likely made in Kent sometime in the middle of the 9th century. (Another important early copy of the Historia ecclesiastica, known as the Moore Bede, was also displayed in our Anglo-Saxon Kingdoms exhibition.) The two manuscripts which formerly belonged to Sir Robert Cotton (died 1631) were damaged by a fire at Ashburnham House, London, in 1731. You will notice that their parchment pages were blackened and warped by the heat of the flames, with the occasional loss of parts of their text. 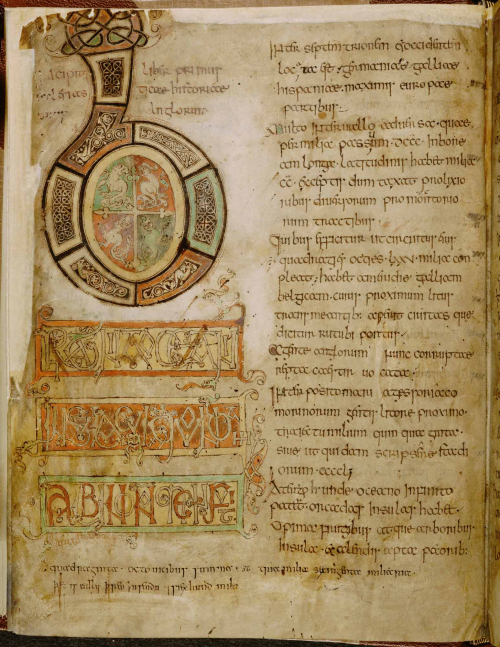 According to Bede (Historia ecclesiastica, II.5), Rædwald was for a while the most powerful king to rule South of the Humber. He was described as the fourth such king to hold 'imperium' over the southern Anglo-Saxon kingdoms, a phrase later translated into Old English as 'bretwalda' ('Britain-ruler'). Rædwald's candidacy as occupant of the Sutton Hoo ship-burial is based furthermore on his being the first king of the East Angles to be baptised as a Christian (Historia ecclesiastica, II.15). But Bede did not hold him in the greatest esteem. Rædwald was said to have been perverted by his wife and other evil counsellors into maintaining a temple with one altar for the Christian sacrifice and another for pagan worship. This would align with the combination of Christian and non-Christian grave-goods discovered at Sutton Hoo. In Bede's words, 'rex Reduald natu nobilis quamlibet actu ignobilis' ('King Rædwald was of noble birth but ignoble in his deeds'). 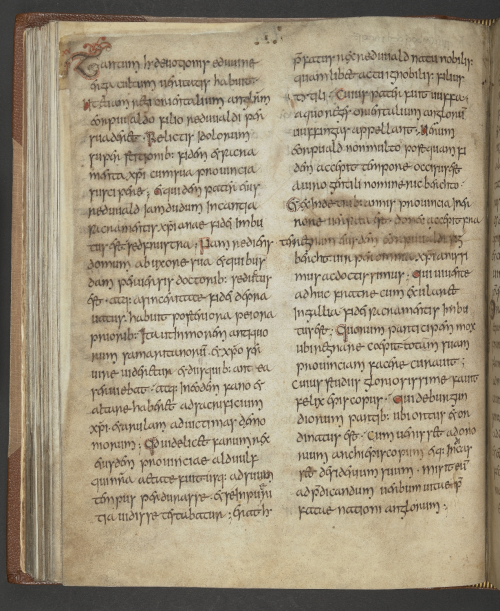 The chapter of Bede's Ecclesiastical History in which he records that Rædwald was a lapsed Christian, of noble birth but ignoble in his deeds (lines 1-2 of the 2nd column): Cotton MS Tiberius C II, f. 54v

But Rædwald isn't the only candidate for the ship-burial. He was succeeded as king by his pagan son, Earpwald, who later converted to Christianity under the influence of King Edwin of Northumbria. Bede reports that Earpwald was assassinated by a pagan not long after his conversion, thereby becoming the first Anglo-Saxon king to be martyred on account of his Christian faith (Historia ecclesiastica, II.15). Sigeberht, another son (or step-son) of Rædwald, ruled East Anglia in the aftermath of Earpwald's death. He was a devout Christian, who had been converted in Gaul while fleeing from the enmity of Rædwald (Historia ecclesiastica, III.18). Sigeberht eventually abdicated and retired to a monastery, until an army led by the pagan King Penda of Mercia invaded around the 640s. Sigeberht was dragged to the battlefield in order to inspire the East Angles, but he refused to carry anything but a staff and was killed. The whole East Anglian army was either slain with him or scattered. 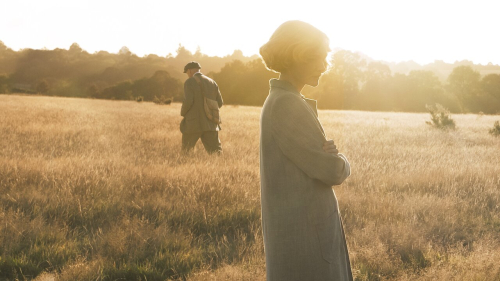 A still from The Dig (Netflix)

The complicated dynastic history of the East Anglians, combined with the lack of firm dates for the reigns of these kings, makes it well-nigh impossible to conclude with any certainty who was buried at Sutton Hoo. As we have seen, Rædwald, Earpwald and Sigeberht alike all adopted the Christian faith, but Rædwald effectively renounced it while Earpwald was murdered soon after he had converted. Assigning the ship-burial to any of these men depends in large part on our subjective opinion of what constitutes a 'pagan' or 'Christian' grave-good at this period. But this does not detract from our romantic notions of the burial site, as exemplified by The Dig itself.

The book which accompanied the Anglo-Saxon Kingdoms exhibition is available to purchase from the British Library online shop. You can also read more about the background to Sutton Hoo and the conversion period on our dedicated Anglo-Saxons webspace, including this article by Alison Hudson on the early Anglo-Saxon kingdoms. We would also heartily recommend the blogpost Inside 'The Dig' by the British Museum's curator, Sue Brunning, which analyses the historical accuracy of the new film.

Posted by Ancient, Medieval, and Early Modern Manuscripts at 10:55 PM