Around this time of year, the British Library’s reference team are often asked about the earliest known Valentine, supposedly a poem in our collection which was sent by the 15th-century prince Charles d'Orléans to his wife while he was imprisoned in the Tower of London. If you search online for ‘earliest known Valentine’ you will see this claim appearing on various websites. As you might be able to guess, the story doesn’t fully check out. But it’s certainly true that Charles was partial to poetic musings on the theme of Valentine’s Day, so this year, we thought we’d set the record straight by exploring the truth of Charles’ Valentine’s Day poetry. 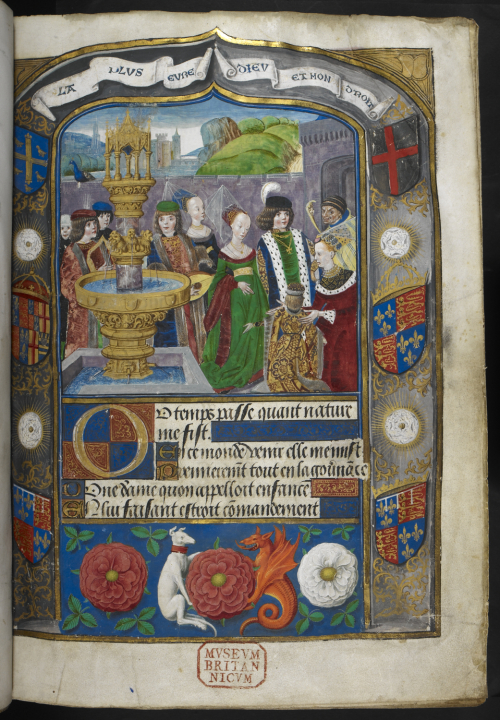 Who was Charles d'Orléans?

Born in 1394, Charles d'Orléans was a member of the French royal family, the grandson of King Charles V of France (r. 1364–1380) and nephew of King Charles VI (r. 1380-1422). He became Duke of Orléans at the age of fourteen after the assassination of his father. On 25 October 1415, Charles fought at the Battle of Agincourt when France was catastrophically defeated by England. The twenty-one-year-old was captured on the battlefield and brought back to England where he remained as a political prisoner for the next twenty-five years. He was finally released in 1440 and spent the last years of his life in France, dying in 1465.

Despite the political turmoil that surrounded his life, Charles is best remembered as a gifted writer of romantic, witty and sometimes wistful poetry. He wrote over 500 poems in the course of his life, with a particularly prolific period during his years of captivity. Charles wrote in both Middle French and Middle English, the latter of which he learned to speak fluently while in England. The British Library holds several important manuscripts of Charles’ work: a unique collection of his English poetry thought to have been made under his personal supervision (Harley MS 682), an exceptionally lavish illuminated copy of 166 of his French poems owned by King Henry VII of England (Royal MS 16 F II), a 15th-century copy of Charles' personal poetry manuscript (Harley MS 6916), as well as an early 16th-century copy of some of his French poems (Lansdowne MS 380). 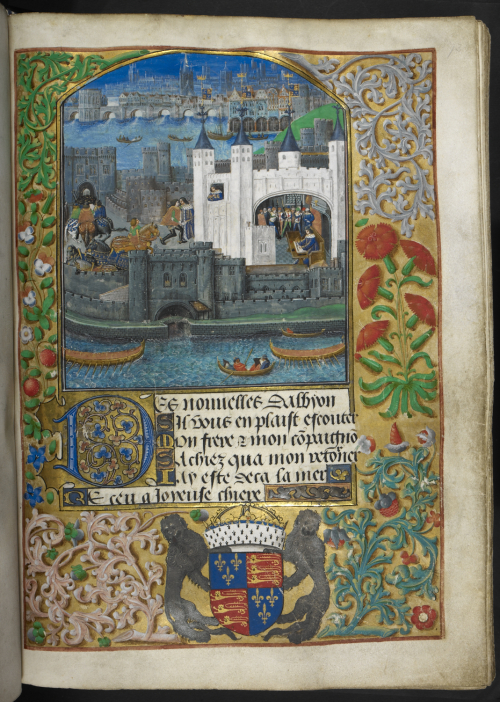 Charles d'Orléans writing poetry in the Tower of London, with the Royal arms of England in the border below: Royal MS 16 F II, f. 73r

The poem that is sometimes referred to as the earliest known Valentine begins ‘Je suis desja d'amour tanné / Ma tresdoulce Valentinee’ (I’m already wearied by love, my very sweet Valentine). Yet the romantic story attached to the poem doesn’t stand up to fact-checking. Charles did not compose this poem while he was imprisoned in the Tower of London, but in around 1443-60 after he had returned to France. It is not included in Harley MS 682 or Royal MS 16 F II, both manuscripts which consist mainly of poems composed during Charles’ time in England. The only British Library manuscript which includes the poem is Harley MS 6916, a copy of Charles' personal poetry manuscript which he began in England then brought back to France and to which he continued adding until the end of his life (now Bibliothèque nationale de France, MS Français 25458). Despite being addressed to ‘my very sweet Valentine’, the poem is not a personal message of affection like today’s Valentine’s cards. It actually refers to the courtly practice of holding a lottery on St Valentine’s Day in which everyone was assigned a partner, generally not their husband or wife, who was supposed to be their ‘Valentine’ for the year. This was a rather artificial enactment of the concept of courtly love, in which knights were supposed to devote themselves to the service of a married lady. In the poem, Charles excuses himself from the custom, apologetically telling his allotted Valentine that he’s too old and tired.

By Charles’ time, Valentine’s Day poetry was already a well-established genre with examples by Geoffrey Chaucer, Oton de Grandson, John Gower, Christine de Pizan and John Lydgate, among others. It was the fact that such poems were already well-known that meant Charles could play with the audience’s expectations by writing what is essentially an anti-Valentine. 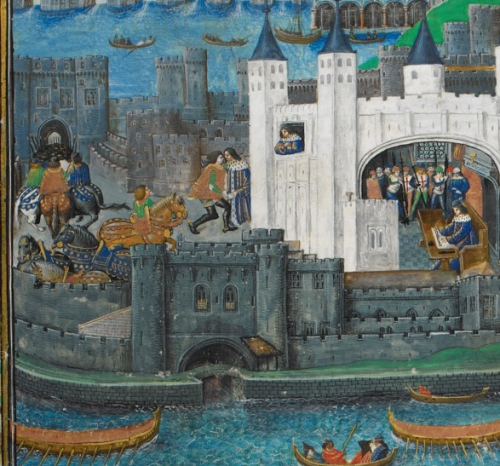 Although he can’t qualify as having written the first Valentine, Charles d'Orléans was still an important figure in the development of Valentine’s Day. About fourteen of his poems explore the subject of Valentine’s Day, a surprisingly high number, many of which can be found in British Library manuscripts.

One poem, beginning ‘Dieu Cupido, et Venus la Deese’ (The god Cupid and goddess Venus), was written when Charles was still a young man in France. It takes the form of a mock contract placing Charles in the service of Cupid and Venus. The poem ends by stating that the contract is granted on St Valentine’s Day:

(Granted the day of Saint Valentine, martyr,
In the city of Gracious Desire,
Where we had our council convened.
On behalf of sovereign Cupid and Venus,
Several worldly pleasures to this man present).

The poem demonstrates the close association of St Valentine’s Day with love and desire. Its optimistic and playful tone makes a striking contrast with Charles’ later more sombre poetry on the theme of Valentine’s Day. 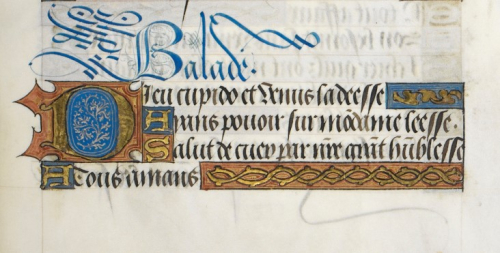 In a later poem set on St Valentine’s Day, written during his captivity in England, Charles sadly reflects on the death of his partner, perhaps his wife Bonne d’Armagnac (d. 1430/35). Beginning ‘Le beau souleil, le jour saint Valentin’ (On St Valentine's day, the beautiful sun), Charles tells how he wakes up and hears the birds singing and choosing their mates. The idea that birds pick their partners on Valentine’s Day had been a major theme in Valentine’s poetry since Chaucer's Parlement of Foules. This prompts the bereaved Charles to lament:

(Let men and women of Love's party
Choose their St. Valentine this year!
I remain alone, comfort stolen from me
On the hard bed of painful thought). Both of these poems were also adapted into Middle English versions which can be found in Harley MS 682 (ff. 1r-v, 47v-48r). For example, the above passage about Charles' grief on Valentine's Day appears in English as:

Als wele is him this day that hath him kaught
A valentyne that louyth him, a y gesse,
Where as this comfort sole y here me dresse
Upon my bed so hard of noyous thought.

(As he is well this day that has caught
A Valentine that loves him, as I guess,
Whereas this comfort addresses me here alone
Upon my bed so hard of painful thought). 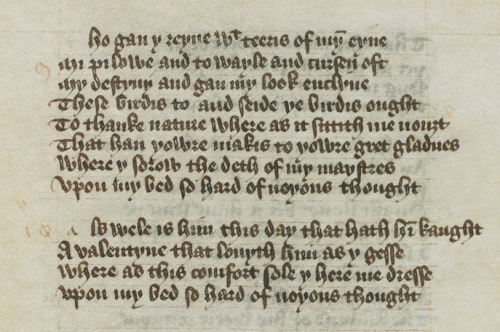 If, however, you do want to find out about the earliest surviving Valentine’s love letter, take a look at our previous blogpost on the letter written by Margery Brews to her future husband John Paston in 1477.