Canon tables are ubiquitous and fundamental to Christian copies of Scripture over many centuries, in both Greek and Latin. Devised by the early Church Father Eusebius (d. c. 340), bishop of Caesarea in Palestine, the tables present a unifying gateway to the Gospels, the four biblical accounts of the life of Christ written by the Evangelists, Sts Matthew, Mark, Luke and John. The tables contain numbered lists of passages that are either shared in two or more Gospel accounts, or are unique to a particular Gospel. As Eusebius explains in a letter to his friend Carpianus, he compiled the ten tables (or canons, in Greek) to help the reader ‘know where each of the Evangelists was led by the love of truth to speak about the same things’.

In deluxe copies of the Gospels, the canon tables offered an opportunity for artists to explore a different type of decoration from pictorial illustration and narrative initials. Typically the tables are presented in micro-architectural frames, sometimes complete with faux marble or porphyry columns under elaborate arched pediments.

Perhaps the most well-known canon table in the British Library is also the earliest: a sophisticated 6th- or 7th-century example in Greek made in Constantinople (modern-day Istanbul). These canons are now fragmentary, comprising only two leaves that were added to a 12th-century manuscript of the Gospels in Greek. The fragments give a glimpse of what must have been a truly splendid book, as they are written on gold, and embellished with bust portraits above the arches. 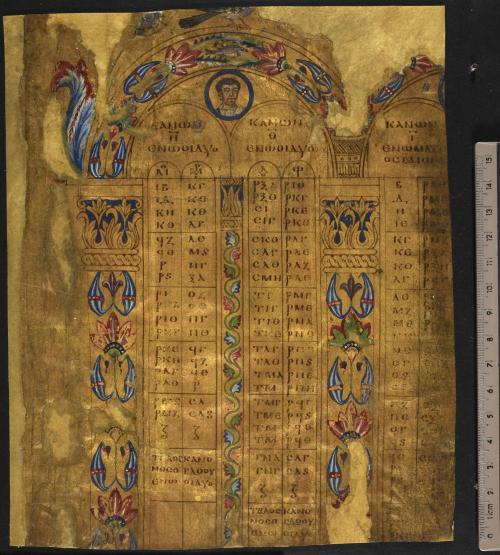 In an elegant 9th-century Latin example the decoration is enhanced by the presence of an archer who prepares to shoot an arrow across the pediment at another man, who is preparing to launch his spear. 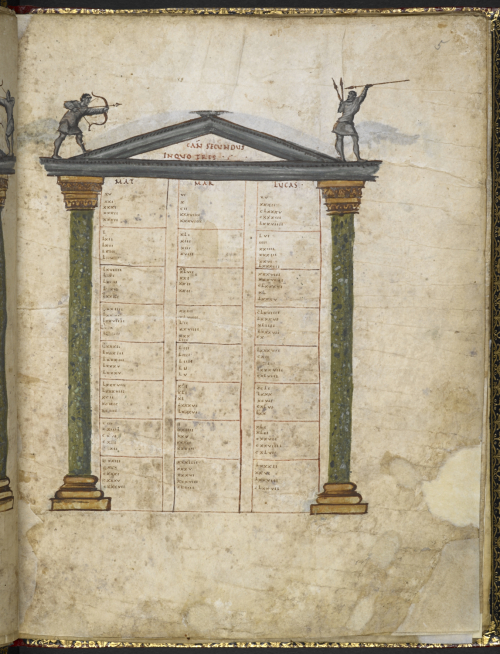 In a later, 12th-century Latin version of the tables from the Benedictine abbey of St Pierre in Préaux in Normandy, the columns feature lush foliage topped by elaborated capitals, with twisted winged creatures embedded in the design. The first canon is set out as seven groups of five passages identified by Roman numerals (the Ammonian section references), divided by horizontal lines and presented in four columns. Each column is headed by the name of the relevant Evangelist (Math[eu]s), Marcus, Lucas and Joh[ann]es). At top, the Abbey’s patron saint St Peter sits above the central column, identified by the key held in his right hand. This attribute was derived from Christ’s statement that ‘That thou art Peter; and upon this rock I will build my church . . . And I will give to thee the keys of the kingdom of heaven’ (Matthew 16:18-19). 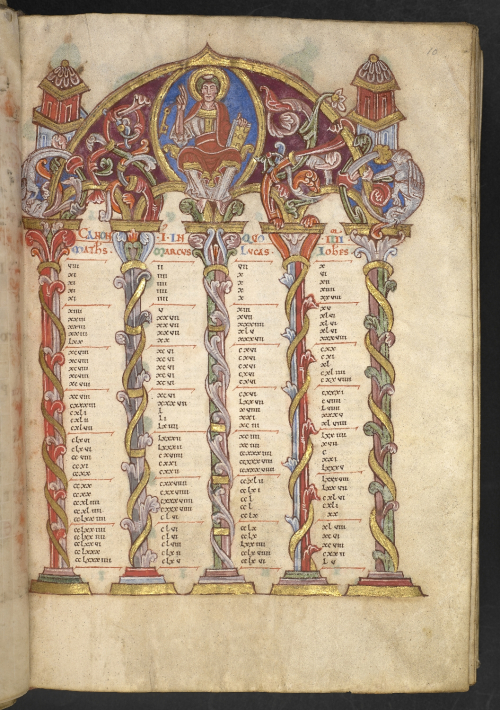 The other nine canons all include a central nimbed figure holding a gold book, presumably representing an Evangelist and the Gospels themselves, which are to come following the elegant correlation of their contents. 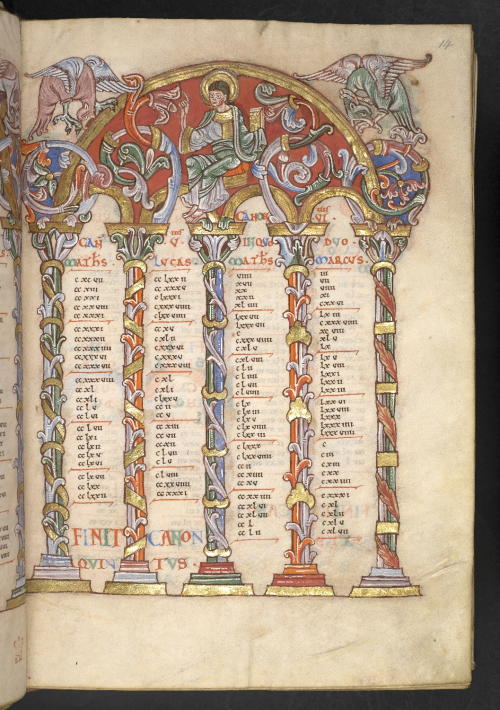 To find out more, you can also explore our articles on Manuscripts of the Christian Bible, Illuminated Byzantine Gospel-books, and Biblical Illumination, as well as our earlier blogpost on the Golden Canon Tables.