Lady Jane Grey’s letters from the Tower of London

On 12 February 1554, the 16-year-old Lady Jane Grey (1537–1554) approached the scaffold at the Tower of London, to be beheaded for committing high treason against Mary I of England. According to a contemporary diary, known as the Chronicle of Queen Jane, she held ‘a boke in hir hande, wheron she praied all the way till she cam to the saide scaffolde’. Containing prayers that should be read for ‘adversity and grievous distress’ and ‘strength of mind’, this manuscript, identifiable as the pocket-sized prayer book Harley MS 2342, may have comforted her in her final hours. But Jane also used it to comfort others. In its empty margins she had scribbled farewell messages to her father, also imprisoned at the Tower, and to Sir John Brydges, Lieutenant of the Tower of London, who may have passed it on after her death. 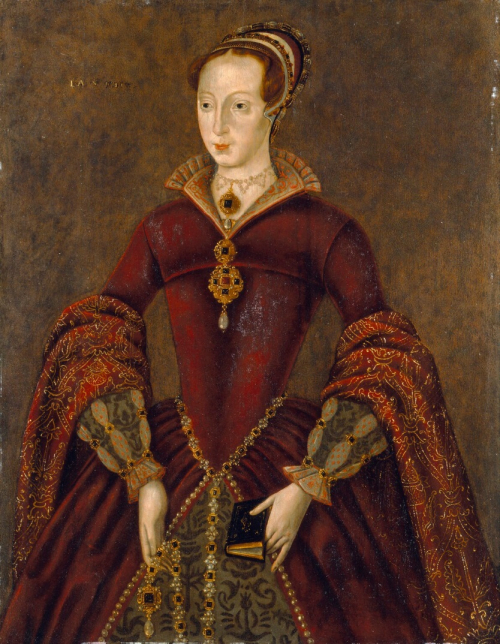 Some abrupt events took place in the final year of Jane’s short life. In 1553, a dying King Edward VI, aged just 15, removed his Catholic half-sister Mary Tudor, his legitimate successor, from the line to the throne. Instead, he instructed that Jane, his Protestant cousin, should inherit the crown. On 10 July, she was proclaimed Queen of England, but only nine days later, Mary seized the throne with the aid of her supporters. Although Jane’s life was cut short, her messages in Harley MS 2342 and other writings associated with her imprisonment at the Tower of London helped create a long-lasting legacy. 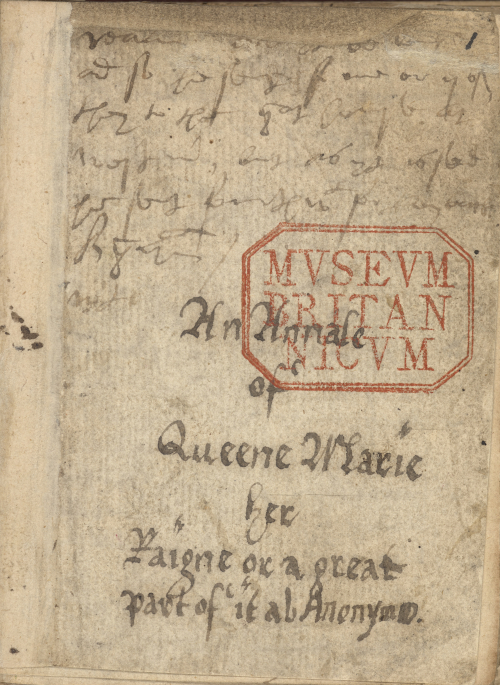 Most of Jane’s surviving writings from the Tower concern spiritual advice. In her message to John Brydges, she encouraged him to live in stillness (without succumbing to the temptations of the world) by reminding him of the much greater spiritual joy that can be gained in the afterlife:

‘I shalle as a frende desyre you, and as a Christian require you, to call uppon God, to encline youre harte to his lawes, to quicken you in his waye, and not to take the worde of trewethe utterlye oute of youre mouthe. Lyve styll to dye, that by deathe you may purchase eternall life [...] for as the Precher sayethe there is a tyme to be borne and a tyme to dye and the daye of deathe is better then the daye of oure byrthe - youres as the lord knowethe, as a frende Jane Duddeley’ 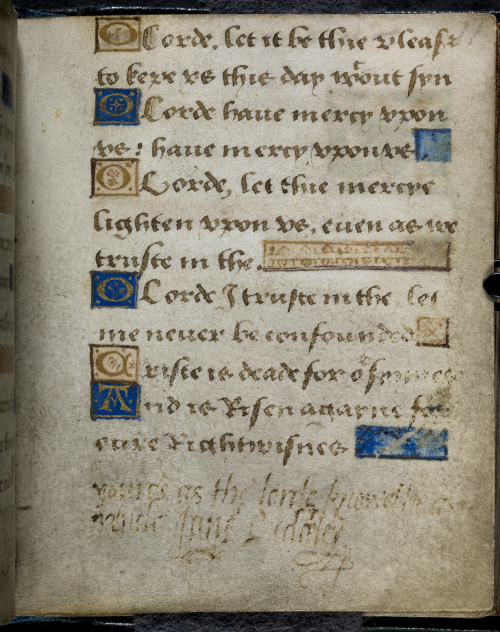 A Latin poem that Jane is said to have scratched with a pin into the wall of her cell at the Tower of London contains further advice. One manuscript version of the poem, which adds an English translation and opens with an English verse from one of her letters, claims that she wrote it for her husband, Lord Guildford Dudley (c. 1535–1554), who had been awaiting execution elsewhere in the castle. Her purported message offers words of advice, consolation and a caution against the vicissitudes of life that seem appropriate for a wider audience:

Do never thincke it straunge,

Though nowe I have misfortune

ffor if that fortune chaunge:

The same to the may happen.

Yf God do helpe thee: Hate shall not hurte thee,

Yf god do fayle thee: Then shall not Labor prevayle thee’ 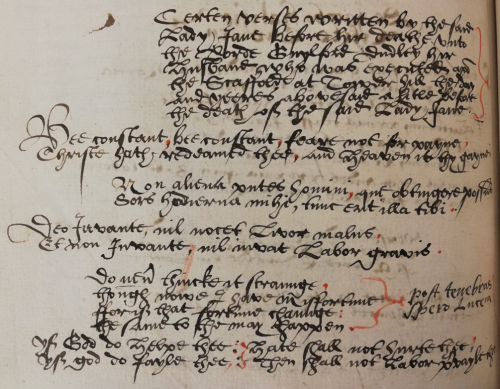 A poem that Jane purportedly inscribed in her cell at the Tower of London (Cheshire, late 16th- and early 17th-century): Egerton MS 2642, f. 213v

Although these writings may have been relatively unknown in the 16th century, several of Jane’s prison letters were published in print shortly after death. One is a letter to her younger sister Lady Katherine Grey (1540–1568), written on the night before her execution on the pages of a New Testament in Greek. A copy of this printed letter was subsequently entered onto the empty leaves of a 15th-century English manuscript (Harley 2370) containing a treatise known as the Ars moriendi (‘Art of dying’). Like the latter work, Jane’s letter reminds the reader of the importance of leading a virtuous life while hoping for salvation in death:

‘Lyve styll to dey, that you by deth may purchas eternal lyfe [...] And trust not that the tendernes of your age shall lengthen your liffe; for as sone (if God call) goith the yowng as the old: and laborre alway to lerne to dey, deney the world, defey the devell, and disspyse the flesh, delite yourselfe onely in the lord.’ 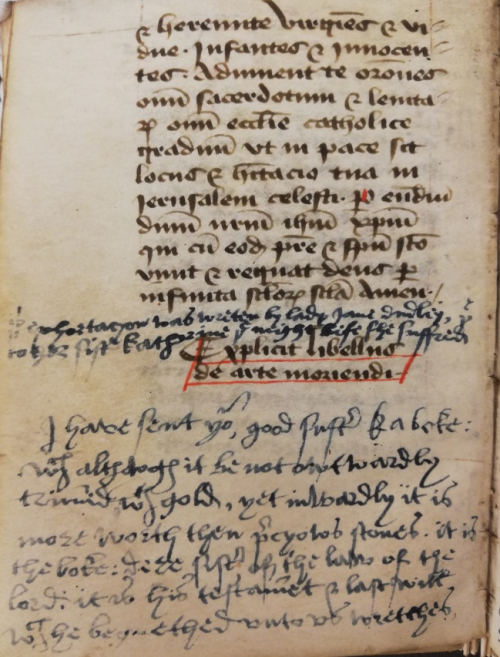 But Jane did not only write spiritual advice. In two other letters published together with that to her sister, she eloquently defended the Protestant faith against the Catholic Church. One of these is a letter addressed to an anonymous man who had recently converted from Protestantism to Catholicism. A handwritten copy of it can be found in one of the volumes of the Protestant historian John Foxe (1516/1517–1587) that he used for his account of the persecution of Protestants under the Catholic Church, entitled Actes and Monuments and known as his Book of Martyrs, published in 1563.

An Epistle of the Lady Iane, a righte vertuwes woman, to a lerned man of late fallen from the truth of Gods word for feare off the worlde (England, c. 1560): Harley MS 416, f. 25r

In the other letter, Jane recounted her debate with John Feckenham (c. 1515–1584), a Benedictine monk sent by Mary Tudor a few days before the execution in order to convert her to Catholicism. In it, Jane details how she remained unmoved by and refuted Feckenham’s attacks on her Protestant ideas. For example, she retorted to him, ‘I grounde my faith uppon goddes word and not uppon the Churche for if the Churche be a good Churche the faith of the Churche must be tried by goddes worde and not goddes worde by the Churche’. The dialogue was published in pamphlet form as early as 1554, but gained further circulation by its inclusion in Foxe’s Actes and Monuments.

When Jane was writing, she cannot have expected her letters to reach an audience beyond their intended recipients. However, during Mary Tudor’s restoration of Catholicism and persecution of Protestants, her letters found a different audience among printers and readers. These publications made her the first female author whose spiritual letters were printed in England, and ensured that her letters survived into modern times.