You are probably familiar with the Christian tradition of giving up something for Lent, the forty-day period before Easter. In the Middle Ages, however, the rules of Lent were much stricter: it was a period of obligatory fasting for all but the very old, very young or very sick. People were only allowed one meal per day and were forbidden from eating all meat, dairy and eggs, with the exception of fish. Many medieval people found these rules very challenging, so cooks tried to find creative ways to make the most of the few cheering foods that were still allowed – especially wine, ale, nuts, fruit, sugar and spice.

The great medieval bake off team are taking up the challenge of medieval Lenten baking by recreating three recipes for Lent or fast days from a Middle English recipe book from the 1430s, Harley MS 279. On your marks, get set, bake! 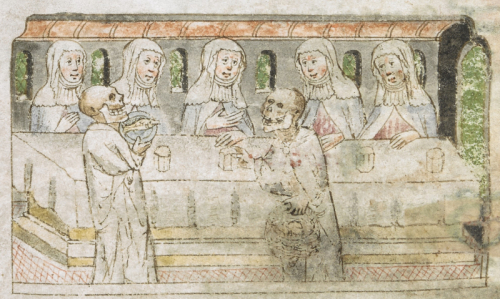 Fasting nuns at the refectory table being served by skeletons (an allegory of abstinence), from Cotton MS Tiberius A VII/1, f. 97v

Take and blend a rich milk of almonds, mix it with sugar water, then take hardened pastry crusts and pour your filling on them, blanch whole almonds and sprinkle ginger powder, cinnamon, sugar, salt, and saffron on them, bake them and serve them forth.

Flat pies, known as ‘Flathouns’, were evidently a popular delicacy in 15th-century England. Our Harley manuscript has two recipes for them. One version contains a sweet custard filling made with dairy milk, eggs, and butter. The other one is almond-based and specifically made for Lent.

Almonds were a popular ingredient in recipes for medieval days of fast. People thought that they were good for your health as well. In her book Physica, a work on natural medicine, the German abbess and polymath Hildegard of Bingen (1098–1179) recommended almonds for remedying headaches, restoring a healthy colour to one’s face, and strengthening the lungs and liver.

I first filled a muffin tray with vegan puff pastry that I blind baked for 15 to 20 minutes in a preheated fan oven at 200°C. To make the filling, I mixed 500 grams of powdered sugar with 4 to 5 tablespoons of almond milk and vegan butter, which, after some whipping, essentially created a frosting. I poured the filling into the crusts and sprinkled them with blanched almonds, a few pinches of cinnamon, ginger, and salt, and drops of saffron water. Finally, I returned them to the oven for another 5 minutes of baking. The resulting ‘Flathouns’ tasted delicious both hot and cold. I suspect that they were the highlight of many a medieval Lenten fast. 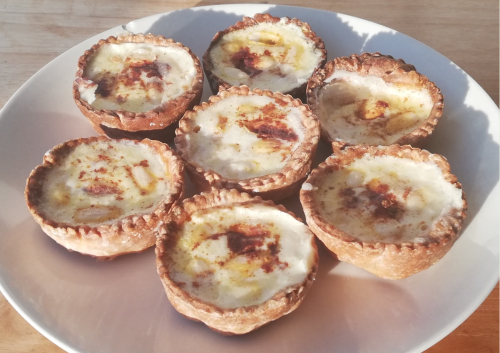 A plate with ‘Flathouns in lente’, photo by Clarck Drieshen

Ellie’s recipe: A potage on ffysdaye / a pottage on a fishday 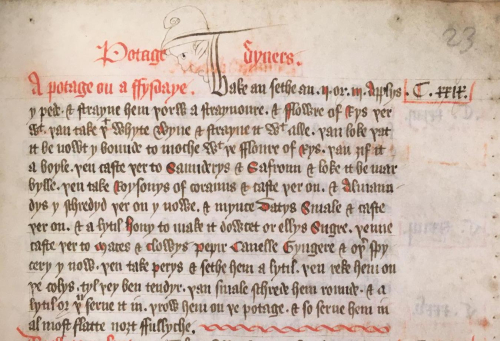 Take and boil 2 or 3 pared apples and strain them through a strainer with rice flour; then take white wine and strain it with everything; then make sure that it isn't too thick from the rice flour, then give it a boil; then add sandalwood and saffron and check that it is marbled; then take currants and add them in, and enough shredded almonds; and mince dates finely and add them in, and a little honey to make it sweet, or else sugar. Then add mace, cloves, pepper, cinnamon, ginger and enough other spices. Then take pears and boil them a little; then rake them on the coals till they are tender; then chop them into round pieces, and a little before you serve it, put them on the pottage, and so serve them almost flat and not heaped.

In medieval England, fast days were known as ‘fishdays’ because fish was the only animal product that could be eaten. So this recipe is called ‘pottage on a fishday’ not because it contains fish, but rather because it meets the rules for fasting. Pottage, meaning a soup or stew, was a staple medieval meal for rich and poor alike. This, however, is a rather indulgent example packed full of fruit, wine and spices.

I wasn’t sure whether medieval people would have access to fresh apples in Lent, around six months after the apple harvest in late summer. But searching online, I found various websites claiming that many varieties of apple can keep until the spring if properly stored, and the fact that several medieval Lenten recipes call for apples suggests that this was also true in the Middle Ages.

To make the recipe, I peeled, cored and chopped 3 small apples and boiled them till soft, then puréed them. I added to the pan a cup of rice flour and a cup of wine, gradually mixing to avoid lumps, and brought the mixture to the boil. Then I added a pinch of saffron strands (sadly I couldn’t find any sandalwood). I added a handful each of currants, flaked almonds and chopped medjool dates, as well as a teaspoon of honey and a pinch each of mace, cloves, pepper, cinnamon and ginger. The same question about seasonal availability also applies to pears, so in this case I added chopped dried pears, a common method of food preservation in the Middle Ages (although the poached and grilled fresh pears that this recipe calls for would also be delicious). I simmered everything for around 10 minutes, stirring and adding water to prevent it getting too thick.

The finished result was a thick fruity stew which could satisfy even the sweetest sweet tooth. It reminds me of the filling for an apple strudel, although the velvety rice flour and the rich flavours of the wine and the different fruits make it much heartier and more complex. 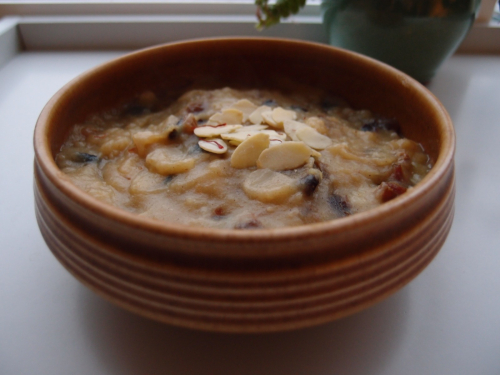 Modern recreation of a pottage on a fishday, photo by Eleanor Jackson

Take Eyroun and blow owt þat ys with ynne atte oþer ende . þan waysshe þe schulle clene in warme Water . þan take gode mylke of Almaundys and sette it on þe fyre . þan take a fayre canvas and pore þe mylke þer on . and lat renne owt þe Water . þen take it owt on þe cloþe . and gader it to gedere with a platere . þen putte sugre y now þer to . þan take þe halvyn dele and colour it with Safroun . a lytil . and do þer to pouder Canelle þan take and do of þe Whyte in the neþer ende of þe schulle . and in þe myddel þe ȝolke . and fylle it uppe with þe whyte . but noȝt to fulle for goyng over . þan sette it in þe fyre and roste it and serve forth

Take eggs and blow out the insides, then wash the shell clean in warm water, then take good almond milk and set it on the fire. Take a fair piece of muslin (or any fine cloth) and then pour the milk through it and let the excess liquid run out. Then put it on the cloth and gather it together on a dish and mix with sugar. Take half of the mixture and colour it [yellow] with saffron a little and add a little cinnamon and put the white mix at the far end of the egg shell and put the yolk in the middle and then fill the rest up with the white mix, but not too full in case it spills out. Then set it on the fire and roast it and serve it forth.

Many recipes from surviving medieval cookery books express a real playfulness and sense of theatre around food, comparable to the delights of modern gastronomy and Michelin-starred cuisine. During Lent this creativity became particularly heightened as medieval cooks tried to overcome the restrictions of the fasting period. The recipe for ‘Eyroun in lentyn’ above describes a simple way to make a set of imitation eggs out of almonds for the dinner table.

For my version, I took blanched almonds and blended them in a food processor to create a fine powder. I added this to water, mixed it together to create my almond milk and then added sugar and heated the mixture until the sugar dissolved. Then I strained the mix through a sieve (you could also use a piece of fine muslin), leaving behind a moist and quite sweet almond mixture, similar to a pastry cream or frangipane. I imagine you could vary the amount to suit your tastes. I took a third of the mix and added yellow colouring to it (instead of saffron) to create my ‘yolk’. Then I gathered together the remaining mixture for the ‘white’ of the egg, piped it into a half shell and then put the yolk on top to complete the illusion. I put the half eggs in a casserole dish filled with ground almonds, so that they could stand up straight and then dried them out in the oven for about 10 to 15 minutes. Overall, the recipe was a lot of fun to make, but I think I may prefer the taste of a chocolate egg for my Easter treat this year… 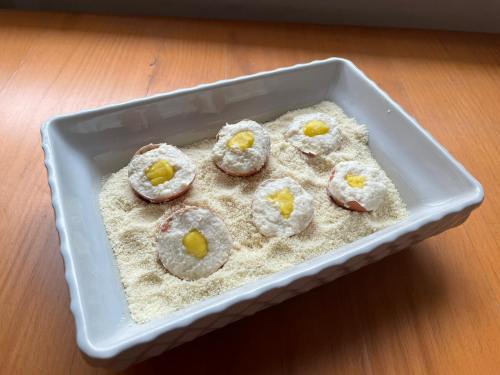 Modern recreation of eyroun in lentyn, photo by Calum Cockburn

Many a medieval faster was surely glad when the austerity of Lent ended and Easter, one of the great feasts of the Church’s year, began. Nevertheless, after making and tasting our recipes, we believe that little delicacies such as ours brightened up people’s fasts and gave them a foretaste of the more festive times ahead.

If you're enjoying our medieval bake off blogposts, we recommend checking out the events in the British Library's Food Season, especially the talk on historical food manuscripts, Food Scribes, Food Lives.

***disclaimer: these recipes were made in the authors' own time and at their own expense. No Library resources were used in the making of these medieval treats! ***