To mark St David’s Day this year, we are looking at the life and work of a medieval Welsh poet, clerk, and biographer, and one of the most renowned scholars of his time.

His name was Rhygyfarch (b. 1057, d. 1099) and he was born the eldest son of Sulien the Wise (b. 1011, d. 1090/1), a learned teacher who served two terms as bishop of the city of St Davids in Pembrokeshire. Named after Wales’ patron saint (its Welsh name Tyddewi means ‘David’s house’), the city of St Davids was regarded as an important place of learning during the medieval period and the ecclesiastical centre of the Welsh Church. Its cathedral was the resting place of St David’s body and his relics, and was later declared a pilgrimage destination by Pope Calixtus II (r. 1119-1124). By the mid-11th century, the city had also become home to a highly influential monastic school overseen and maintained by Sulien and members of his family. 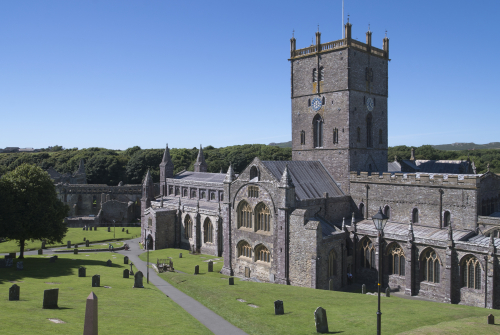 The cathedral of St Davids and the Bishop’s Palace (mattbuck / Wikimedia Commons / CC-BY-SA-2.0)

Rhygyfarch’s early life was evidently devoted to learning. He appears to have spent much of this time in St Davids, where he and his brothers were personally taught by their father. Their education most likely involved an intensive study of major Classical authors including Ovid, Virgil, Boethius, and Macrobius, and Anglo-Latin writers such as Bede and Aldhelm of Sherborne. Subsequently, Rhygyfarch became the clerk of the ecclesiastic community of St Padarn at Llanbadarn Fawr, situated further up the coast near Aberystwyth, which housed an important scriptorium (a place where manuscripts were made) and a well-stocked monastic library, though few of its manuscripts now survive.

It was there that Rhygyfarch gained a reputation amongst his contemporaries as a foremost scholar and teacher, which persisted for centuries after his death. In fact, he was so widely regarded throughout the country that the Brut y Tywysogion (Chronicle of Princes), a historical work that informs much of our understanding of the history of early medieval Wales, described him as ‘y doethaf o doethon y Brytanyeit’ (one of the most learned of the learned men of the Britons). 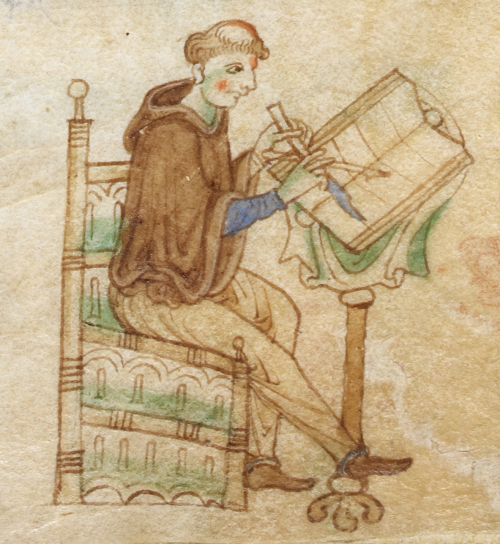 A scribe writing in a medieval manuscript, from Gerald of Wales’ Topographica Hibernica (Royal MS 13 B VIII, f. 22r)

Rhygyfarch composed a number of Latin prose and poetic texts during his lifetime. Most notably, he was the author of the oldest surviving biography of St David, who lived in the 6th century. His Vita sancti Davidis episcopi appears in a single complete copy in a 12th-century manuscript that ultimately became part of the collection of Sir Robert Cotton (Cotton MS Vespasian A XIV). Rhygyfarch wrote the prose work in Latin but by the later medieval period it had also been translated and adapted into a Middle Welsh version known as the Buchedd Dewi. 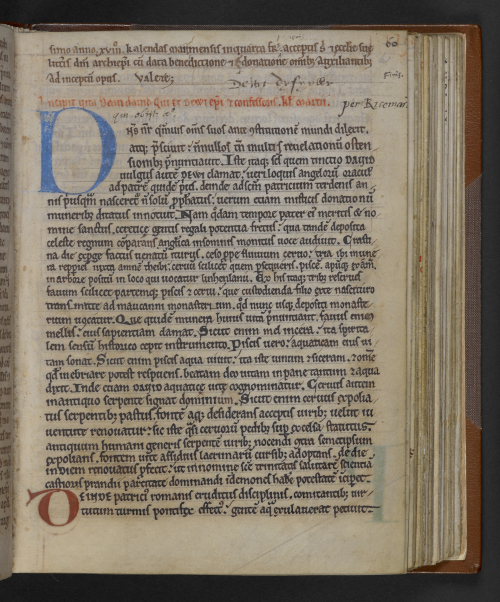 Rhygyfarch’s Life of St David was written during the final decade of the 11th century, when Wales was suffering in the aftermath of successive Norman invasions undertaken by William I (r. 1066-1087) and his son William Rufus (r. 1087-1100). Rhygyfarch expressed his own feelings about the Norman occupation and the subjugation of his people in an emotional elegy now known as Rhygyfarch’s Lament, which he wrote not long after his biography of Wales’ patron saint. The Latin poem is attested in only a single manuscript (now Cotton MS Faustina C I), which was copied at the priory of Llanbadarn Fawr in the half century after the Welsh author’s death. 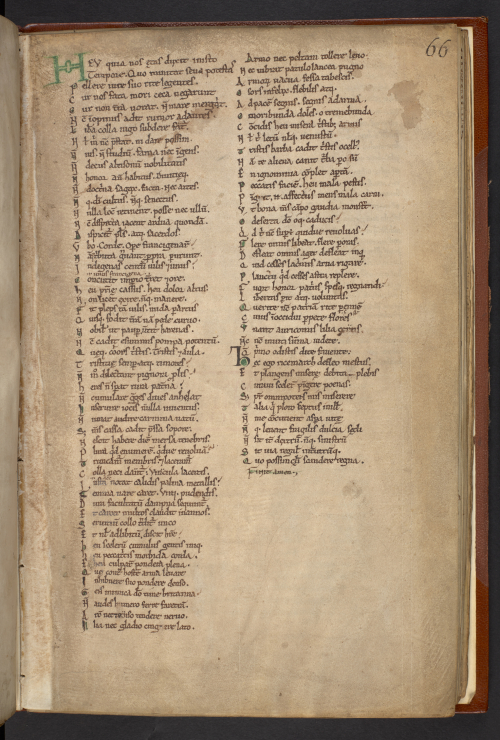 In the course of his Lament, Rhygyfarch mourns Wales’ present plight and calls attention to the Norman oppression of the country, which has caused the apparent decline of all parts of Welsh society. He writes that ‘the people and the priest are despised by the word, heart, and work of the Normans’, that ‘there are continual sorrows and fears’, that ‘the courts are sad’ and ‘there is no pleasure in hearing the songs of poets’. Rhygyfarch’s depiction of Wales is of a country trapped by its grief, from where ‘it is not possible to leave, nor even possible to stay’.

Rhygyfarch also turns his focus to the Welsh people themselves, and in an extended passage denounces their lack of courage, urging them to take action against their oppressors in increasingly emotive language:

[Wales], you do not dare to carry the quiver of arrows on your shoulder, nor stretch the bow with a tight bow-string, nor gird your guts with the broadsword, nor raise the shield on your left shoulder... [Wales], you are struck down and dying, you tremble in fear, you collapse, alas, miserable in your sad defences. Nothing is joyful to you now, nothing pleasant. Your beard sags, your eye is sad; for a hostile crowd speaks of you as hateful. Disgrace fills your open face with blemishes. Alas for the evil plague: for the diseased mind reflects its condition in the flesh, just as the healthy mind shows its joys to the field.

Rhygyfarch’s Lament captured the frustration of many of the Welsh in their captivity and it also seems to have foreshadowed a call to arms against the Norman invaders that would soon spread throughout the country. In 1094, soon after the poem’s composition, the Welsh rose up against the Norman occupation in an open revolt that ultimately led them to reclaim many of the kingdoms they had previously lost by the end of the century.

Cotton MS Faustina C I is notable for featuring another of Rhygyfarch’s Latin poems, entitled De messe infelici (On the Unhappy Harvest). The work consists of a single four-line stanza written in the upper margin of one of the manuscript’s pages. The poem is noticeably more playful than his Lament and takes the form of a proverb that warns of the potential danger posed by mice to a harvest:

The endless rain pours down, destructive (to the harvest) with its violent downfall,
for the reaper cannot commit scythes to the crops:
although he spares his mature crops,
an army of mice nevertheless refuses to spare the fields.

Both Cotton MS Faustina C I and Cotton MS Vespasian A XIV have been digitised in their entirety by the British Library and are available to view online on our Digitised Manuscripts site. We hope you enjoy reading Rhygyfarch’s writings and wish you a Happy St David’s Day!